Any women’s basketball standout from Southeast Michigan, concluding an accomplished college career, should not be surprised if Dreyon Wynn reaches out to them. Wynn, President and General Manager of the Flint Monarchs bills himself as an “encyclopedia of women’s basketball.” That knowledge, combined with uncanny people skills, passion for the game and the ability to create a welcoming environment, has allowed Wynn to put together rosters overflowing with talent since taking over the only professional women’s basketball team in the city’s history, in 2011.

Each player tells their own story of how Wynn’s recruiting efforts won them over. 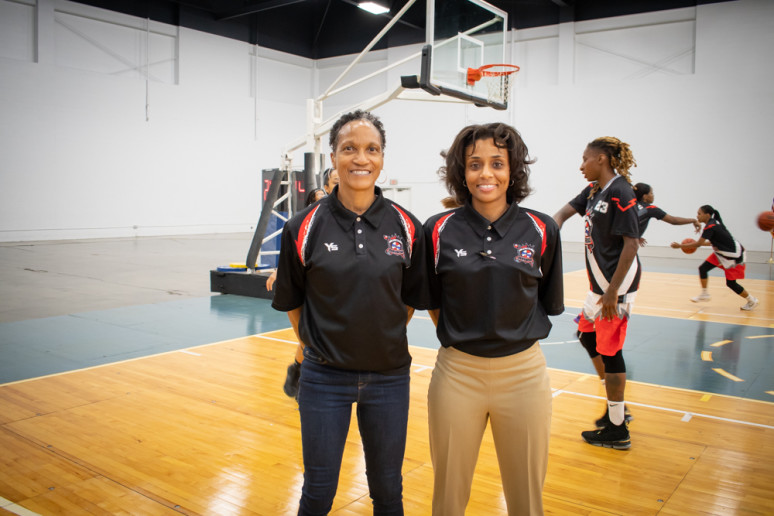 For first-year forward Taylor Gleason, a Miss Basketball runner-up at Goodrich High School who played for Illinois and Oakland University, it began with a Facebook message. “Drey said he had watched me play in high school, knew that I was coming to the end of my time in college and wanted to know if I’d like to be part of the team,” says Gleason, “I went to a couple of practices and really liked it. Playing for the Monarchs has been a great experience. You can easily tell how much Drey supports women’s basketball with all the time and money he gives in support of the organization.”

Wynn, also a full-time human resource professional at Schoolcraft College in Livonia, devotes about 35 hours a week to the Monarchs and their league—the Global Women’s Basketball Association (GWBA). “Anyone who knows me understands how passionate I’ve always been about women’s basketball because I’ve felt the women’s game is under-appreciated and undervalued,” says the 39-year-old Wynn, who played for Flint Northern and Grand Blanc high schools. “Every year, our team’s talent-level has improved and we are doing more in the community than ever. It’s been a blessing to bring this level of women’s basketball to Flint.”

Wynn’s association with the franchise began in 2010. The team was then known as the Flint Flames and he was coach. They were part of the Women’s Blue Chip Basketball League and they advanced to the third round of the league’s national tournament. Then, a major change took place which altered Wynn’s life and the team’s course. Flames owner Ladel Lewis announced she was moving to Baltimore and that the team was folding. WBCBL officials then approached Wynn about keeping a team in Flint and, with players’ support, the Monarchs were born with Wynn as sole owner, President and GM. Wynn then hired a new coach. “I knew it would be best for the organization if I utilized my strengths of recruiting and marketing besides coaching,” Wynn recalls. 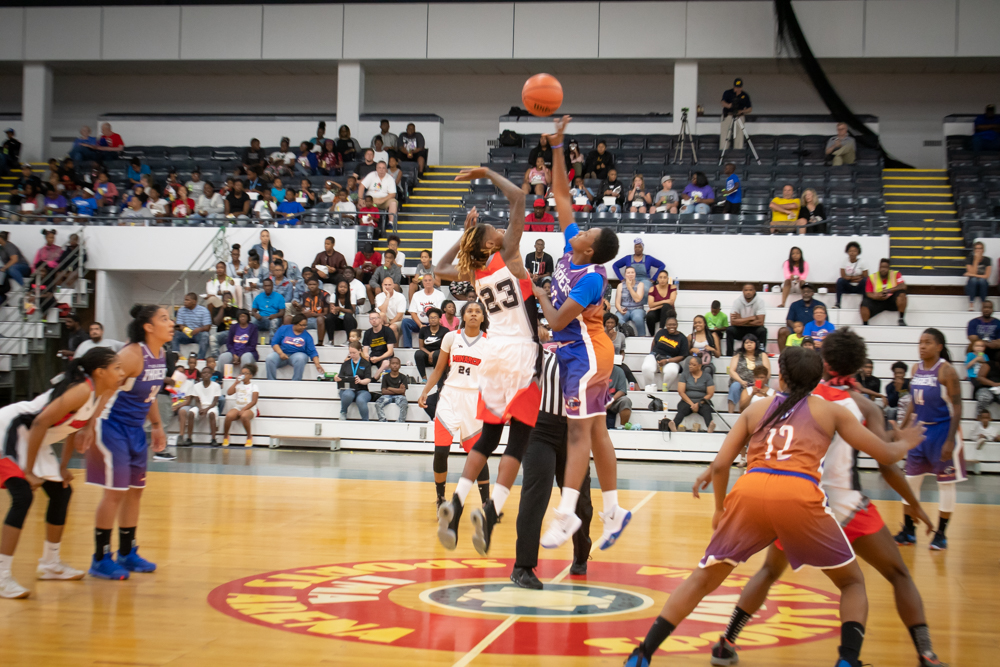 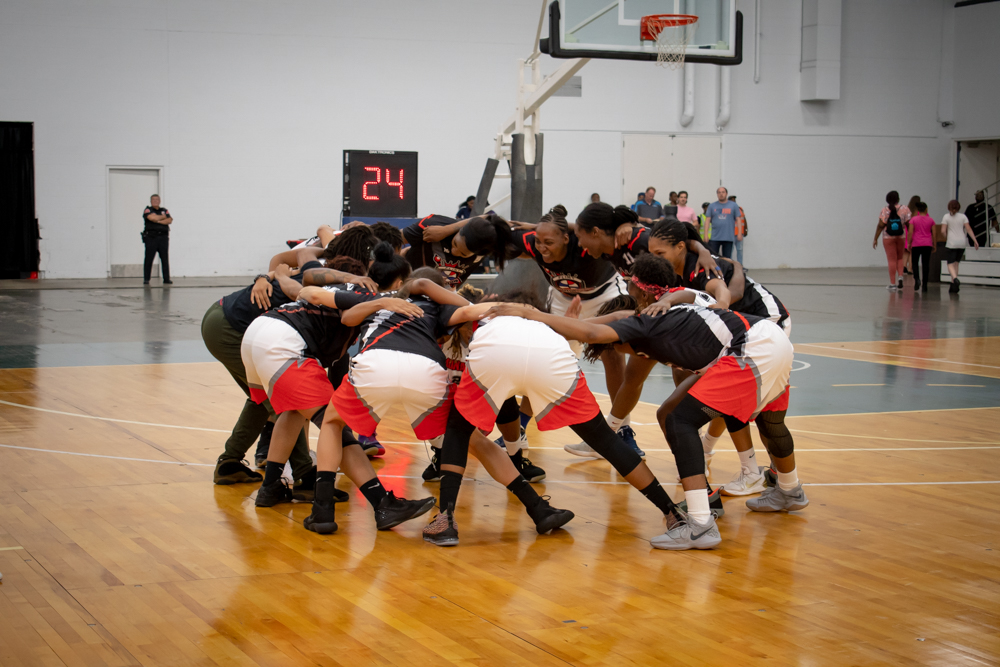 In 2014, Wynn initiated the Monarchs’ transition to a professional team. They also joined the Women’s American Basketball Association (WABA) and won their first championship. Finals Most Valuable Player Tara Johnson, a former Hamady and Michigan State standout led the way. The Monarchs defended their championship the following year.

Flint joined the GWBA in 2016 and won the first of two straight titles. Arlesia Morse was Finals MVP that year and Crystal Bradford last season. Morse, an All-Stater at Flint Hamady and all-conference player at Marquette University, has played an integral role in every Monarchs championship. She has been the team’s top scorer the past three seasons, averaging nearly 20 points a game during that time. Morse also led Hamady to consecutive Class C state titles in 2009 and 2010, and is one player Wynn did not have to recruit. She came to him, hanging out at Monarchs’ practices while still in high school. “We kept in touch and he did call after my last season at Marquette to be sure I was coming back to Flint, but I had wanted to join the Monarchs for years,” Morse says. “This year has been more fun than ever with all the experienced and talented players we have coming together as one and doing whatever it takes to be successful.”

Late last month, their high level of play put the Monarchs on the cusp of their third consecutive GWBA championship. The league’s title was at stake when the Monarchs (7-1) hosted the Chicago Breeze (5-2) on Aug. 25 at Dort Federal Credit Union Arena which became their new home this year. Overall, the organization is seeking a fifth straight title. 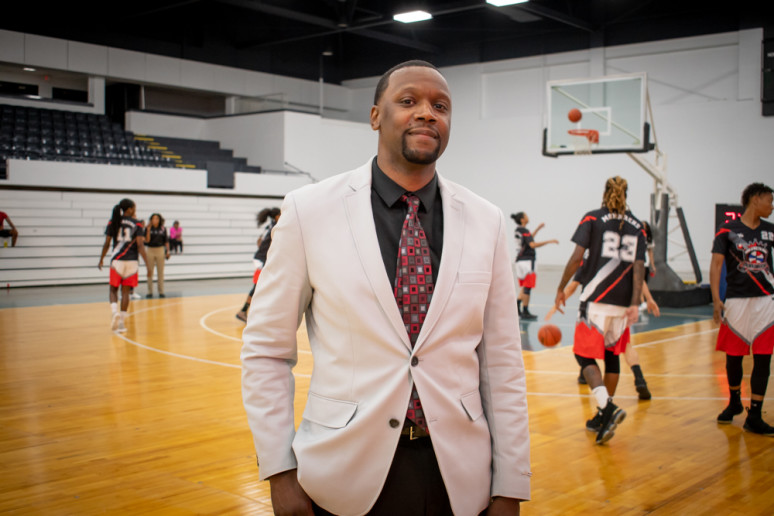 “Anyone who knows me understands how passionate I’ve always
been about women’s basketball because I’ve felt the women’s
game is under-appreciated and undervalued.”
Dreyon Wynn President and General Manager.

Other players who have been a part of every Monarchs’ title run are former Hamady All-Staters Brandie Baker (Central Michigan), and Jasmine Thomas (Michigan State) along with former Detroit Communication and Media Arts All-Stater Jasmine McCall (Bowling Green).

Flint was especially dominant this season, outscoring opponents by an average margin of 99.1 to 67.2 points per game, but needed to display that dominance one more time to extend its run of championships. “We still have to bring our best game because whichever team we play is going to really come after us,” says second-year guard Sparkle Taylor, an All-Stater at Flint Northwestern and all-conference performer for the University of Texas-El Paso. “We have to keep focused because the work is not done and we have to get after it in the championship game and keep a level head until the final buzzer.”

One of four Monarchs named GWBA Player of the Week this season, Taylor joined the team after Wynn invited her to a game. “I really liked what I saw and thought the Monarchs would offer a great opportunity to continue playing during the summer,” says Taylor, who also plays for a professional team in Cyprus during the traditional basketball season. “It’s been a very good experience and it’s great for me to go against such strong competition in practice. We go hard at each other, but also have a lot of fun together on and off the court.” 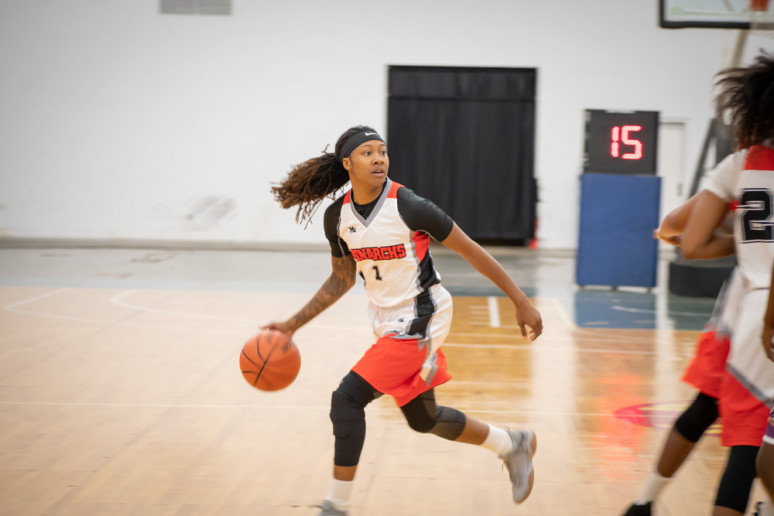 Forward Crystal Bradford (Central Michigan) boasts the most impressive basketball resume. An All-Stater while at Inkster High School, Bradford was taken seventh overall in the 2015 WNBA Draft by the Los Angeles Sparks. She appeared in 15 games for the Sparks that year, starting one, before continuing her career oversees. Bradford is scheduled to join a team in Israel this fall. “Crystal is such a gifted player. Playing well seems so effortless for her,” Wynn says. “Honestly, I don’t understand why she isn’t still in the WNBA. She has the talent.”

The Monarchs’ other former Division 1 players are Asia Boyd (Kansas), Lesha Jones (Wisconsin), Nya Jordan (Michigan) and Rachel Kehoe (Eastern Michigan). Rounding out the roster are former Hamady standout Morgan Neeley (William Penn), Jasmine Brown (Lake Superior State) and Morgan Pullins (St. Mary’s College). All play oversees, except Brown, Neeley, and Jones, and they report to Monarchs training camp less than two months after their international seasons conclude. “That gives us an advantage because we have so many players coming into camp sharp and ready to go,” says Nicole Randolph, Monarchs coach since midway through the 2015 season. “That’s just one of the reasons for our success. The depth of Drey’s recruiting and the talent he’s brought in has been huge, establishing us as the team to beat. We are also never caught playing down to the level of our competition. We try to play to our maximum potential.”

While Wynn provides talented pieces, Randolph and assistant Linnell Jones-McKenney assemble them into a well-oiled machine. Both are highly-qualified to do so. Randolph, an all-stater at Southfield Lathrup, played for Indiana and Oakland University. She has also helped legendary Detroit Country Day coach Frank Orlando win five Class B state championships in 11 seasons as his assistant. Jones-McKenney, a three-time All-Stater at Flint Northwestern and two-time All-American at Kentucky State, became Flint’s first female professional player after being drafted by the Women Professional Basketball League’s St. Louis Streaks in 1980. “We have a lot of talented players with plenty of professional experience and the coaches let us play our game–whatever is comfortable on the court,” Taylor says. “We can do our thing as long as we are working hard, playing together and our chemistry continues to grow.” 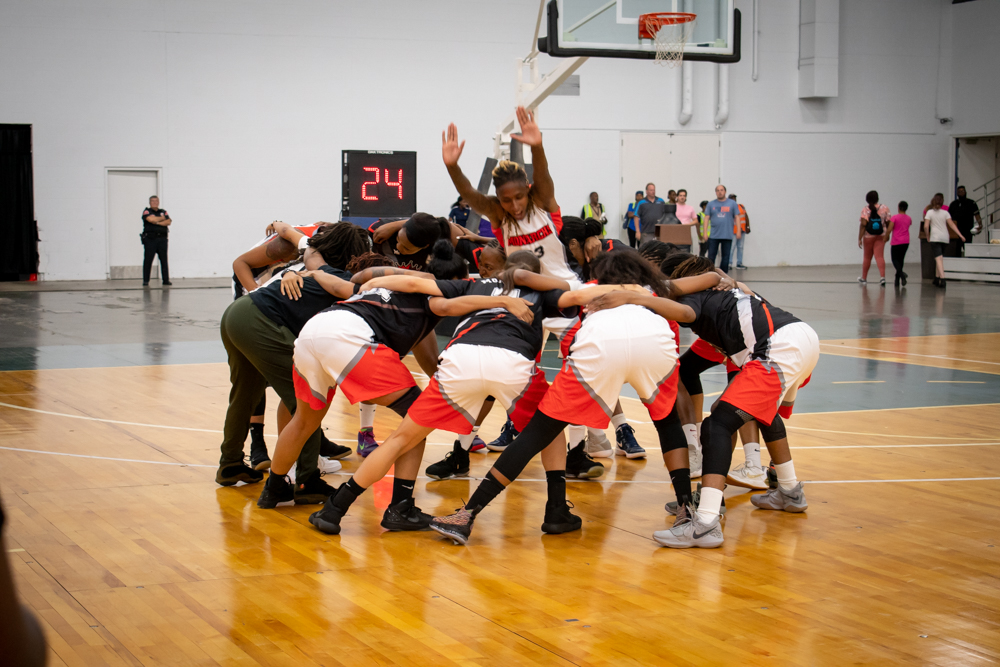 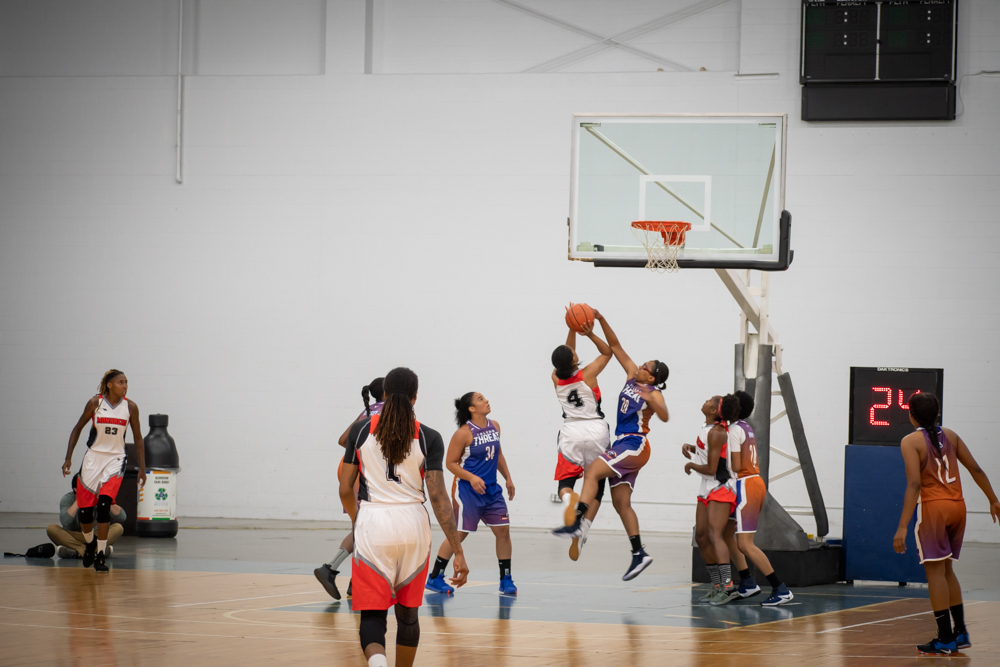 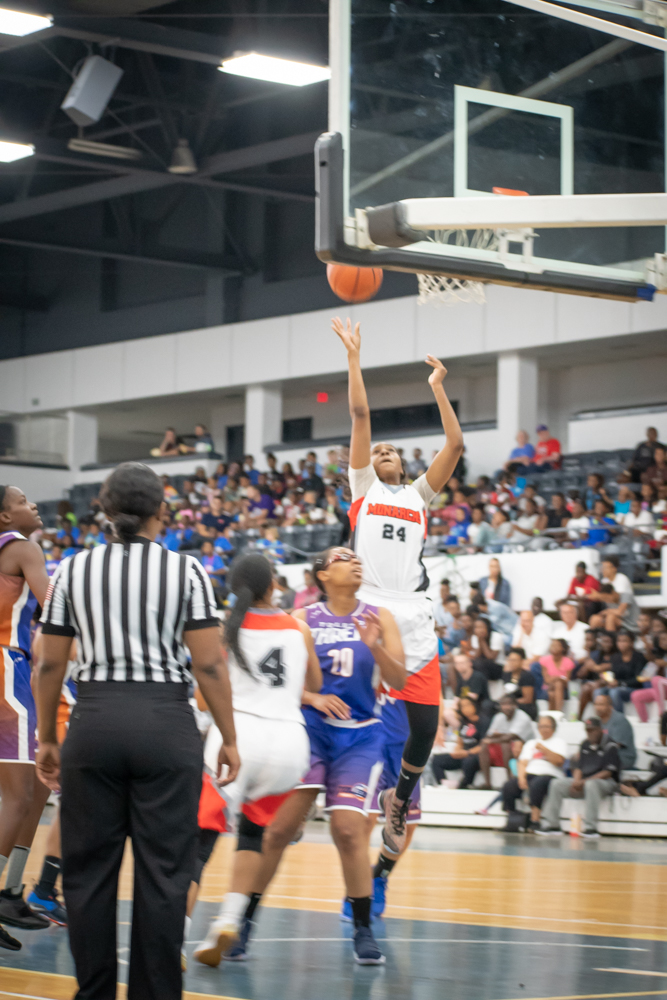 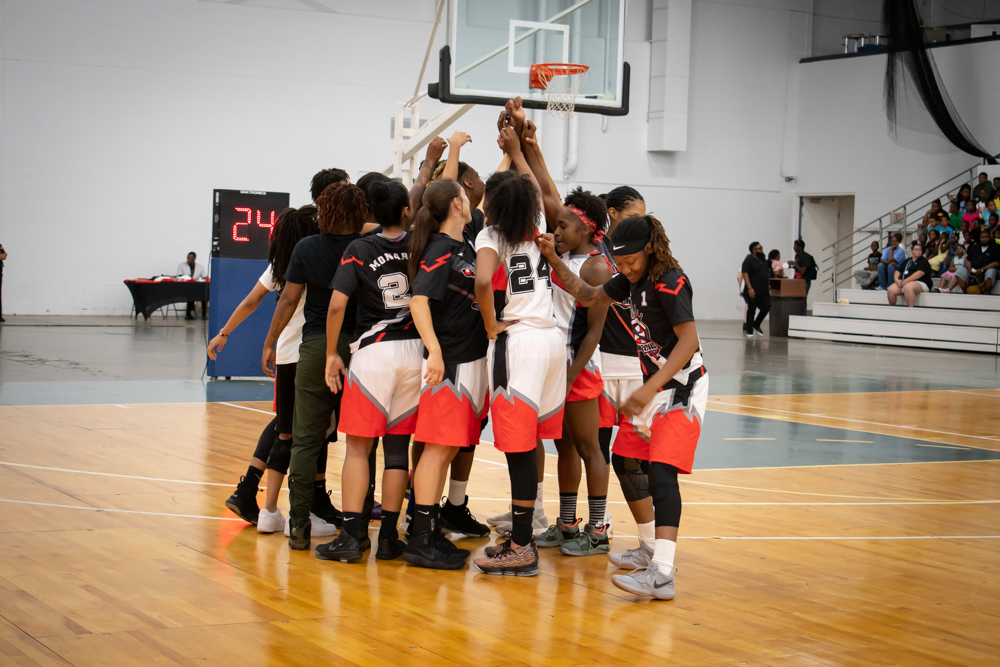 Besides Taylor, Morse (twice), Bradford and Jordan have all been named GWBA Player of the Week. “We have about nine players who are capable of scoring at least 20 points in any game, so that makes it impossible for other teams to just focus on stopping one or two players,” Randolph says. “Our height and athleticism has also been an advantage. It’s rare for a team at our level to have seven players over six feet tall like we do. We’ve also stressed strong defense throughout the season.” Flint’s depth, however, will be tested in the championship game as three of those six-footers missed it to begin training with their overseas teams—Kehoe (6-5), Jordan (6-1) and Pullins (6-0). Gleason did not play for the same reason. “I knew we could be dominant this season because we have so many players who can contribute,” says Morse. “Everybody brings something unique to the team and we never miss a beat when somebody comes into the game for another player. It’s a testament to everybody working on the little things to make us successful.”