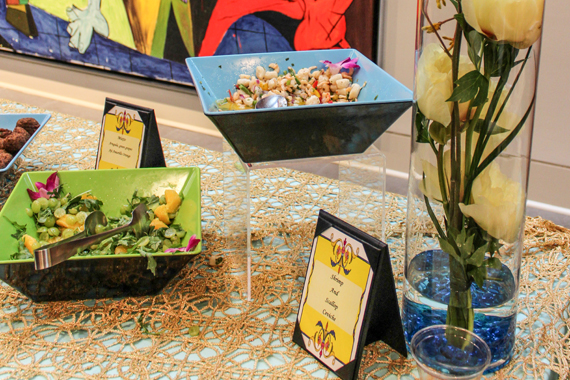 What started four years ago as a celebration for the Dale Chihuly glass display, which hangs aloft in the main lobby of Flint Institute of Arts has become an annual theme party for the arts in Flint. On June 1, FIA held 2013’s The Party, an event with a Brazilian Carnival theme featuring Brazilian samba music, cuisine and art.

The entertainment included the Chicago-based Planeta Azul & Passistas Samba Dancers, who gave the attendees a crash course in samba, and The Boogie Dynomite band, which covered various pop music songs with extraordinary skill. The strolling dinner was catered under the supervision of celebrated local executive chef, Luis Fernandes, and the evening’s décor was furnished by Gerych’s Distinctive Flowers of Fenton.

Over 400 people attended The Party this year, a number which has become an annual average. One of FIA’s biggest fundraisers, the proceeds support FIA programs and exhibitions. Previous themes have featured Bollywood entertainment and an urban graffiti exhibit—which raised a few eyebrows with its demi-nude, body-painted human art. The FIA’s volunteer planning committee organizes The Party, and they try to create something new each year in order to keep things fresh.

Sherren Sandy is the Events Coordinator at FIA. She summed up The Party to My City Magazine stating, “We want it to be a great party, but it’s also something that benefits the museum.” Sandy was pleased with this year’s event, and she thinks that it went really well. “It was one of our smoothest events,” she said. “Everyone seemed in sync, and the night was a success.”

There is an undercurrent of consensus among annual Partygoers that each year, the event draws a growing crowd of young people. This is certainly appealing to the coordinators, who attempt to gradually include elements that cater to such individuals with the addition of deejays and extravagant, avant-guard representations of artistic expression. The volunteer committee welcomes youthful and unconventional ideas and as the committee grows, it tends to bring in younger members.

It’s been said that when it comes to The Party, the name says it all. “It really is a party in every sense of the word,” says FIA Retail Services Manager, Corry Potter. Indeed, The Party is as “artrageous” an affair as FIA claims it to be. With The Party 2013 a success, FIA looks forward to future fundraisers and of course, The Party 2014.

Are you interested in purchasing photos from this story? Go HERE and select the “The Party” category.