By the mid-1880s, the road cart and buggy were dominating the realm of transportation and the City of Flint jumped into the industry feet-first. Between 1885 and 1893, six companies were busy in the city producing high-end vehicles. They were: Flint Road Cart Co. (Durant & Dort), Flint Buggy Co. (the Mallery brothers), Webster Vehicle Co. (T. P. Webster), Flint Wagon Works (James H. Whiting), Randall Carriage Co. (the Randall brothers) and the W. A. Paterson Co. Manufacturing had finally taken over from the mills and logging industries of the pioneers. The mayors of this time period were mostly shrewd business owners who had an eye for city expansion and growth.

This series chronicles the history of Flint’s mayors, providing a short account of their early lives and professions, and their achievements while in office (if known). Some mayors were men/women of great deeds or of great controversy. Some simply acted as placeholders in time. Each of them, however, chaired a city important to its country and citizens on a path through triumph and heartbreak, and toward revitalization. For Part 1 of this series, see the January 2022 issue of MCM. 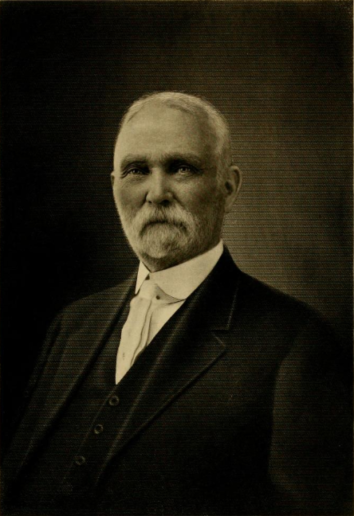 Davison was born in 1839 on a small farm in Belfast, Ireland to an accomplished farmer and weaver, James Davison. At one year old, he emigrated with his family to Adrian, MI and then to Forest Township in Genesee County becoming only the third family to settle there. Davison worked his father’s farm without entering formal schooling until age ten but had to discontinue five years later when his father died. He worked the farm to support his family until age 22 when he left to work on various farms and area lumber camps. He found his way to Flint where he took a job as a clerk in Benjamin Cothrain’s general store and then as a clerk at Henry Brown’s clothing shop. After four years as a clothier, Davison took his life savings to Rochester, NY where he secured a line of credit and a stock of goods to sell at a small shop space in Flint. He was an immediate success and spent 13 productive years in the business before retiring in 1883 due to poor health. Next, Davison dabbled in real estate and in 1893 helped to organize the Union Trust & Savings Bank where he worked as cashier. He then went on to help organize the Alpena County Savings Bank of Alpena, Citizen’s Commercial and Savings Bank in Flint, and was director of the Genesee County Bank. Mathew Davison died in 1918 and was buried in Glenwood Cemetery.

A cigar manufacturer and retail tobacconist with production factories in Saginaw, Flint and Detroit, Warren was born in Ohio in 1842. As soon as he was of age, he came to Genesee County and established a small business in Pine Run, near present-day Clio. He soon jumped into the cigar industry and obtained manufacturing premises in Flint (close to the location of today’s Secretary of State building on Saginaw St.) with his business partner, James Book. His company held patents for “The Flint,” “Our Governor” and “The Warren Cigar” among others and they were sold throughout the state. Soon after he began production, Warren met a young man who claimed to be able to outsell all of Warren’s salesmen combined. Intrigued, he hired the boy and sent him out to neighboring cities and towns. He was shocked to learn that the young man had sold nearly 20,000 cigars! Warren, ever a shrewd businessman, fired his other salesmen on the spot and paid young Billy Durant $100 a month to remain in his employ. He would later invest in Durant’s fledgling road cart business which was founded during his tenure as mayor.

Warren got into some hot water later when his Saginaw cigar manufacturing employees went on strike over unpaid wages and unfair treatment of women workers. It seems that Warren increased the size of his cigars yet refused to pay the union employees for the additional work while reducing the number of employees in general through lay-offs and firings. When he needed additional hands, he began the practice of hiring women and paying them nearly half of what he paid his male workers. The strike lasted for several weeks until Warren released all of the workers from his employ stating that he would “never hire a Union worker ever again.”

Born in Grand Blanc in 1837, Dayton was the owner and manager of the Dayton House, one of the best hotels in the City of Flint. His family is one of the eldest in Genesee County and was the first to depart from a log cabin dewlling and build a framed house. He grew up working the farm with his father and attended the area’s school during the winter months. His farm produced an abundance of wheat that his family sold in Pontiac for 50 cents a bushel. In 1864, Dayton left his farm and traveled to St. John’s, where he opened a cracker manufacturing business with his partner, J. M. Frisbie. The lucrative business pulled down over $30,000 per year (the equivalent of nearly $600,000 today). In 1872, he sold his cracker business and moved back to Flint. In 1880, he purchased the Brotherton House, one of the city’s finest hotels boasting 60 rooms, fine dining (courtesy of cook Minnie Miss) and plenty of entertainment. Renamed Dayton House, the hotel catered to wealthy traveling businessmen and dignitaries. The hotel was located at 415 Detroit St. (now known as MLK Ave.) at the site of the now empty Mega Coney Island building. During his time as mayor, the Flint Cabinet Creamery was incorporated. Dayton died in 1895 and was buried in Glenwood Cemetery. 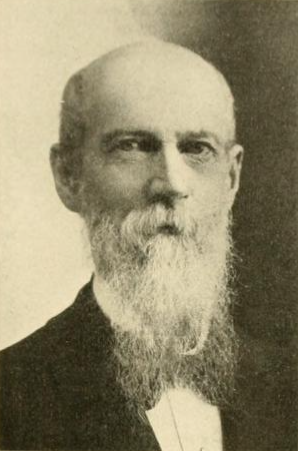 Born in 1833 in Cayuga County, NY, Stone moved to Michigan with his family at the age of 11. Initially settling in Oakland County, they moved to Flint and he set up a general store with goods provided by his parents. His store was doing well but Stone was always looking for new opportunities and when the Civil War broke out, he began producing woolen goods which were in high demand. He found that farmers in the area needed a local woolen mill since cross-country shipping was so expensive, and started the Flint Woolen Mill in 1867. After buying out his fellow investors, Stone began a partnership with William Atwood. Their collaboration became Stone, Atwood & Co. and their wool products were shipped all over the nation. Stone owned and operated Stone’s Opera House located on Saginaw St. In 1869, he started the Flint Pantaloon Co. with friend David Traxler. The company would become world famous for its Neptunus fabric. In 1886, Stone leased one of his buildings to Durant & Dort for their road cart business (Factory 1). Oren Stone died in 1897 and was buried in Glenwood Cemetery.

Baker was born in 1852 in Biddeford, Devonshire, England. At the age of four years, he and his family made their way to Quebec, Canada and then to Flint. Baker attended Flint High School, graduating in 1872 and then left to teach in Illinois before attending medical school at the University of Michigan in 1877. Upon graduation, he opened a practice in Tuscola County before again making his way to Illinois. In 1881, Baker returned to Genesee County, settling permanently on a farm in Clayton Township. He found a business partner and started the Miller & Baker pharmaceutical firm, which he sold in 1889 and then pursued the real estate business. After his stint as mayor, Baker was elected county sheriff in 1891. He also worked as director for the Industrial Savings Bank for a time. Dr. Baker died in 1927 and was buried in Evergreen Cemetery. 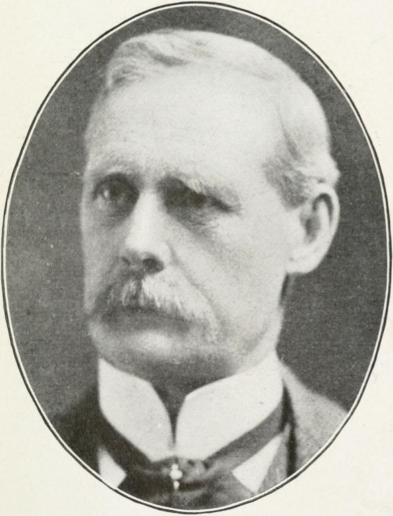 Two of the biggest contributions to Flint made by William A. Paterson are visible today. The Paterson Building stands at the corner of Saginaw and Third Streets, occupied by law offices and retail stores; the Dryden Building located in Downtown Flint on Saginaw St. was recently renovated to house offices and pop-up shops. Besides engaging in construction and real estate, Paterson played a bigger role in Flint’s vast automotive history.

Born in Ontario, Canada in 1838, Paterson became a journeyman craftsman in the carriage-making business at the age of 18. In 1857, he brought his skills to the U.S. building carriages in New England, Kentucky and Illinois. In 1869, he established a buggy repair shop on Saginaw St. and his reputation for service grew. By 1885, he employed a dozen workers, established a factory to build his own carriage models and in 1901 was producing nearly 23,000 vehicles annually. The W. A. Paterson Company incorporated in 1896 and operated a three-building complex at Saginaw and Third Streets. His former office building (now known as the Paterson Building) had a factory adjacent and one across the street, next to St. Paul’s Episcopal Church. Both manufacturing facilities were demolished to create parking lots. (One was redeveloped and is the current location for the Ennis Center for Children.) As the auto industry ramped up, Paterson quickly joined the frenzy in 1908 offering up multiple models of the Paterson automobile throughout the U.S.

In 1907, Paterson built the Dresden Hotel on Saginaw St., considered Genesee County’s most prestigious hotel until the construction of the Durant in 1920. It was destroyed by fire in 1963.

Paterson operated his business until his death in 1921. The W. A. Paterson Company was sold and closed in 1923. Paterson was buried in Glenwood Cemetery.

Rankin was born in Flint in 1854 to Francis H. Rankin, publisher of the Wolverine Citizen newspaper. While attending city schools, Rankin, Jr. began to learn the printer’s trade and in 1881, at the age of 27, gained an interest in his father’s business under the new name of F. H. Rankin and Son. As editor, Rankin, Jr. used the paper to support the functions of the Republican Party and to help anti-slavery Democrats. During the Civil War, he helped his father produce a daily paper to inform the locals about the war. After his father’s passing, he continued to produce the paper until stopping the presses in 1915. As Mayor of Flint, Francis H. Rankin, Jr. oversaw the construction of the Oak Grove Hospital for treatment of mental disorders and addictions. The facility closed in 1920 and became the main building of Flint Junior College. Besides acting as mayor, Rankin Jr. served as secretary for the Genesee County Agricultural Society and vice president of the Flint Gentlemen’s Driving Club. He died in 1925 and was buried in Glenwood Cemetery. 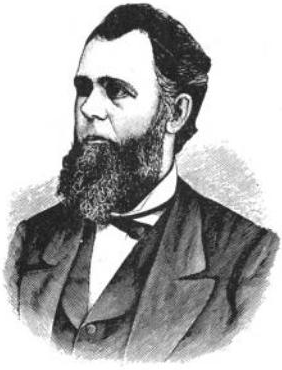 Judge Taylor was born in 1838 in Walled Lake in Oakland County. He taught school as early as age 17 and at age 22, moved to Richfield Township to begin working as a farmer. He switched gears at age 28, became a lawyer and began practicing in Flint in 1880. In Flint, he held numerous civic positions including register of deeds, school inspector, supervisor, probate judge, alderman and mayor. In 1883 he was elected to the State Senate where he served on the Committee for State Affairs, State Reform School, Expiring Laws and Supplies/Miscellaneous Expenses. George E. Taylor died in 1903 and was buried in Avondale Cemetery.