When the Civil War ended on April 9, 1865, the soldiers and members of the upper ranks slowly journeyed back to their homes and returned to normal daily routines. When they returned to Flint, the lumber and milling industry was booming and storefronts were opened up and down Saginaw Street selling wares from dry goods to textiles. With the addition of the railroad, Flint was becoming a destination for commerce. Near the end of the 1860s, the carriage business began booming with other companies joining the Randall Carriage Company (est. 1858) in the market, setting Flint on its path toward becoming “Vehicle City.” During this time, the mayors of the city were an odd mix of professionals and businessmen from lumber barons to doctors and war veterans.

This series chronicles each of Flint’s mayors throughout history, providing a short account of their professions, lives and achievements made during their terms (if known). Some mayors were men/women of great deeds or of great controversy. Some simply acted as placeholders in time. Each one, however, chaired a city important to its country and its citizens on a path through triumph and heartbreak, and toward its eventual revitalization. 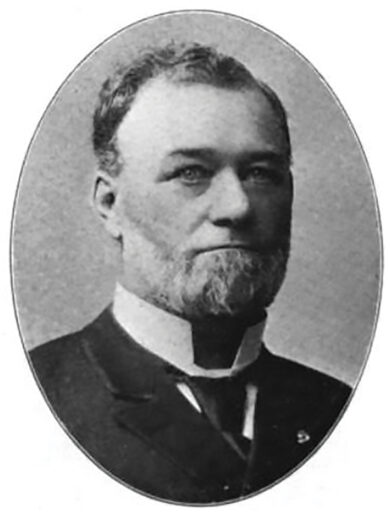 Born in Mt. Morris, NY William Barber McCreery moved to Genesee County, MI with his family in 1838. At the age of 22, he became a lawyer but his occupation was put on hold when a year later, he enlisted with the Union Army as sergeant with Company F, 21st Infantry. During his time with the Army, McCreery rose to the rank of Lieutenant Colonel and was injured a total of six times fighting in the battles of Williamsburg, VA and Chickamauga, GA where he was taken prisoner in 1862. Two years later, he escaped from Libby Prison in Virginia by way of a tunnel he dug with other prisoners. After finding his way back to Union forces, McCreery was forced to resign due to disability caused by wounds and neglect. Upon returning to Flint, he married Ada Birdsall from Fenton. He then started the law firm of Judd, McCreery and Avery, and owned a mill located on the Flint River. After his time as Mayor of Flint, McCreery became one of the directors of the Flint Water Works, director of the Chicago and North Eastern Railway, and the original stockholder of the Grand Trunk Railway. From 1871-74, he acted as U.S. Collector of Internal Revenue. He served as State Treasurer from 1874-78 and as the U.S. Consul to Valparaiso, Chile from 1890-93. After Ada’s death in 1884, he married Genevieve Decker from Flint. McCreery died in 1896 and was buried in Glenwood Cemetery. 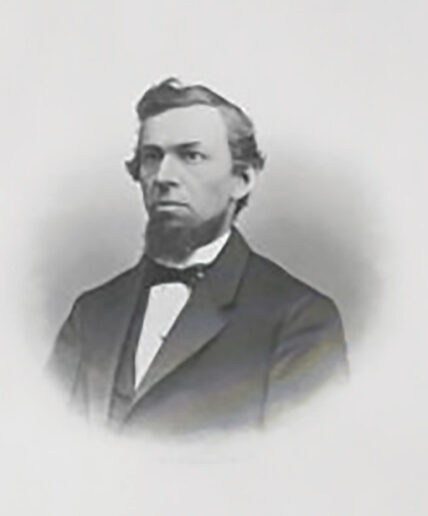 Witherbee came to Flint with his parents in 1841. An industrious sort, he opened a self-named drug store (the now iconic Witherbee’s) as soon as he came of age. The store was a success, but Witherbee had an even more grandiose plan. In 1858, he opened The Exchange Bank, Flint’s first legitimate banking institution, with partners Mr. Meigs and Mr. Stone. He managed the bank so well that in 1864, he bought out his partners and sold his drug store to Charles A. Mason. When the First National Bank was organized, Witherbee closed his bank and took the cashiership position with First National where he was content to finish out his time. He died in 1871 and was buried in Glenwood Cemetery.

Axford came to Michigan from New Jersey as an infant in the early 1830s. During his formative years, he lived in Detroit and attended the University of Michigan where he earned a degree in medicine. He then traveled to Philadelphia where he learned to be a surgeon. In 1858, he traveled to Flint and set up practice. He opened the Axford House (later known as the Kearsley House) as a joint hospital and residence. The hospital stood on the corner of Kearsley and Clifford Streets for some time. (It was demolished during the construction of I-475.) Dr. Axford was well-known and well-respected by residents of Flint and elsewhere. He was perhaps the area’s leading gynecologist and an expert in the practice of ovariectomy (surgical removal of the ovaries). He was so liked that after his death, it was written in the Book of the Golden Jubilee of Flint: “So great was his success that many humorous tales were related of him, to the effect that it was once said of him that there was not a home in town that he had not visited and that his fellow practitioners were all a bit resentful of his advent into their midst.” In 1873, Dr. Axford succumbed to a then-unknown disease and died at the age of 41. He was buried in Glenwood Cemetery.

Not much is known about this mayor of Flint except that he lived in the city and was a part of the lumber business in town and on the AuGres River near the Saginaw Bay. In Flint, Patrick found himself in a bit of trouble while hunting near a mill on the Flint River. As he was waiting for his prey, he heard rustling in the bushes before him and thinking he might have found a trophy, took the shot. As he pushed aside the twigs and leaves hiding his prey, he realized his mistake. Patrick had shot and killed a young native American. Upon hearing of the murder, the local Chippewa tribe was enraged and demanded vengeance. Patrick went into hiding and only emerged when all seemed convinced it was an accident. From that point on, Patrick spent the majority of his time at his lumber business to the north. There, he made friends with the local tribes and even learned the Chippewa language. At the time of this death, he was known by the local tribes as “Good Bill.” It was during his time as mayor when the carriage industry began to flourish. William A. and A. B. Paterson and others started their carriage factories. 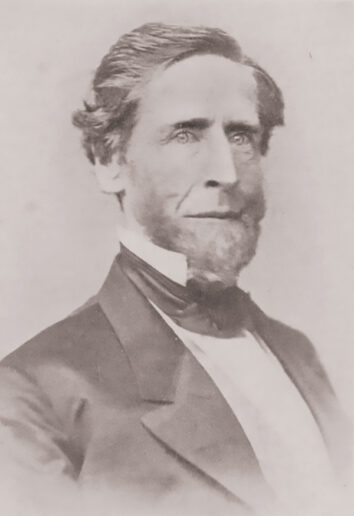 In 1836, Walker came to Flint and started work as a clerk at Beach & Wesson dry goods store, and then as a clerk at H. M. Henderson’s dry goods store. After a time, he went into business for himself operating a store at the corner of Saginaw and Kearsley streets from 1842-58 and engaging in the lumber business. In 1872, he and others opened the Genesee County Savings Bank. Walker’s most notable contribution to the city came from his work as treasurer and building commissioner for the Michigan School for the Deaf (MSD). Founded in 1848, the MSD was located in Flint and operated under one board along with the local asylum for the insane. In 1856, the two institutions were separated and, as trustees of the school, Michigan’s governor appointed Benjamin Pierson, John P. Leroy and Walker. Walker was a trustee until 1873 and because of his efforts, all of the larger and more expensive buildings of the school were built with the exception of Brown Hall. Walker died in 1877, four years after ending his time with MSD, and was buried in Sunset Hills Cemetery. During his time as mayor, Walker helped Flint begin to embrace the power of electricity as he organized the Flint Gas-Light Company with Josiah Begole, William Fenton and Jesse Atwood.

Born in 1817 in Sugar Grove, PA Fox came to Flint in 1856. While in PA, he engaged in multiple trades including farming, lumbering, rafting and manufacturing shingles. At 17, he went to New York to become a skilled tradesman and carpenter. Upon coming to Michigan with his wife Phebe, he rented a shop in Oakland County and began manufacturing steel-tooth cultivators. He soon moved north to Flint and opened a shop. In 1865, he started a lumber business (Walker & Begole) where he began manufacturing shingles for the growing city. After acquiring tracts of land in Lapeer County, the business of Begole, Fox & Co. became one of the biggest in the area. Fox then tried his hand at banking and helped to organize the First National Bank of Flint where he served as president. Using newly acquired capital, Fox helped to found the Flint Wagon Works where he sat as presiding officer. During his two years as Mayor of Flint, the Flint Union Blues were organized and St. Paul’s Episcopal Church moved to its current location. Fox died in 1901 and was buried in Glenwood Cemetery. After his death, Flint Wagon Works continued operations for a decade until it was sold to Billy Durant in 1911 to become a part of Chevrolet. 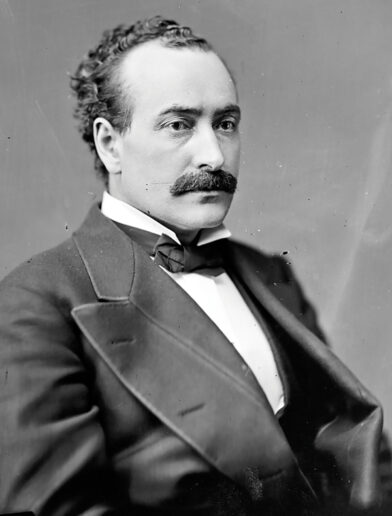 Very few Flint mayors had an impact on both national and state levels as large as that of George H. Durand. Born in a small village in the Catskill Mountains of New York in 1838, Durand began his life as a farmer but as soon as 18 years of age, he left his family for the newer wilds of Michigan. Durand spent time teaching in Oxford, Oakland County, before meeting and studying law with William Fenton. He was admitted to the bar in 1857 and immediately opened a practice in Flint. He served on Flint’s Board of Education from 1862-67 and in 1874 was elected as a Democrat to the 44th U.S. Congress. In Congress, he served as chairman of the Committee on Commerce. In 1892, he was appointed one of Michigan’s presidential electors, as well as Justice of the Michigan Supreme Court. The next year, he was named president of the Michigan Bar Association and also appointed Special Assistant U.S. Attorney in the famous Chinese and opium smuggling case in Oregon. From 1893-96, Durand worked as prosecutor in opium smuggling cases along the Pacific, convicting nearly all defendants. Those on trial included a relative of a U.S. senator, a chairman of the central committee for politics, a customs collector in Portland, a special agent of the treasury department, and others. It was said during his national memorial that in the opium cases, Durand “scored one of the most signal and complete victories in the history of American courts.” Durand died in 1903 and was buried in Glenwood Cemetery. During his time as mayor, Durand oversaw the construction of Flint’s first high school building. The city of Durand, MI is named in his memory. 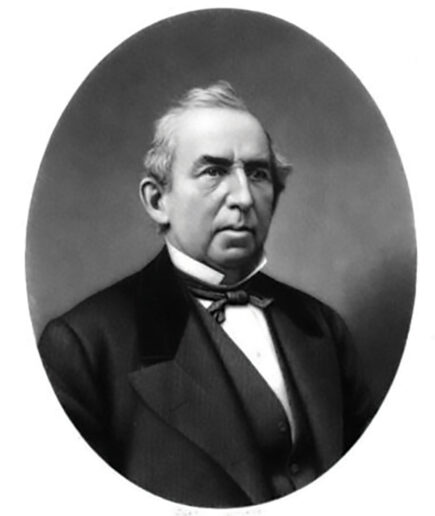 Also one of the more recognizable names in Flint and Genesee County, Alexander McFarland (or McFarlan) was born in 1812 and came to Flint from New York in the early 1840s. In 1850, he started the lumber firm of Hazelton & McFarlan and purchased a mill. His mills burned a total of three times and each time, McFarlan built bigger and better. Soon, his mill and the one owned by Henry H. Crapo were the most successful in Genesee County. McFarlan began to purchase land and established a farm in Mt. Morris. There, he employed a man named Charles W. Nash, who went on to become president of General Motors in 1915. In 1871, McFarlan became president and the leading stockholder of Citizen’s National Bank. His son-in-law, Robert J. Whaley – who made the initial loan to a young Billy Durant and his partner J. Dallas Dort in 1886 – would soon succeed him as president. McFarlan was also instrumental in developing Flint’s downtown. In 1871, he developed a subdivision south of McFarlan Street and a year later, finished the McFarlan and Co. North addition. In 1875, the city purchased a small tract of land which was made into its first park. McFarlan gifted the park with an ornamental fountain and the park was named in his honor. McFarlan Park today sits on the point where Saginaw and Martin Luther King Avenue merge. During the end of McFarlan’s term as mayor, the Flint Journal was started by Charles Fellows and Washington Irving Beardsley. Alexander McFarlan died in 1881 and was buried in Glenwood Cemetery.