We live in a community of runners. A lot of the credit likely goes to the Crim, specifically their training program. I watched my first Crim from the sidelines in 2009 and decided, after seeing people of all shapes, sizes and abilities doing it and owning it, that I was going to give it a try. I believed I could, especially after seeing that a lot of participants mixed running with walking; I had no idea you could walk when you were doing a “run!” (You can, much to the consternation of hard-core runners.)

The October after my first Crim, my training group leader talked me into doing a half marathon in Detroit. “A half marathon?” This 13.1-mile event was not even on my bucket list. It was in fact something I had told myself I would never be capable of. Probably because when I was a kid, I was always the last one standing when kickball teams were picked, and more than one PE teacher over the years told me I was not athletic. I believed it, and never allowed myself to think differently. 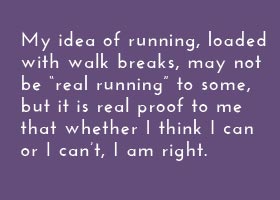 Well, I finished that half marathon. Immediately thereafter, friends who were “real runners” wanted to know my finish time. I was basking in the glow of my accomplishment, and it never occurred to me to look. I had finished, so who cared how long it took? I didn’t know I had committed blasphemy. The next year, I completed a full marathon (26.2 – yes, miles). It took me just under six hours (on par with molasses moving through a sieve). I was in tears because two of my running buddies, who ran the half that day, jumped in and helped me stagger through that last .2 miles of the race. I was offered a wheelchair at the finish line.

I have been training all summer for my third full marathon and fifth trip to the Detroit race. But something has been missing. I lost my “eye of the tiger,” if you will. I have a fancy watch that tells me my running pace, and I haven’t been measuring up to a time goal I set for myself. Suddenly, while on a training run with my friend, Susan, who will be completing her first marathon, I had one of those “aha” moments. Susan was excited to finish. It was not about time for her. I wasn’t enjoying training because what had once been about a journey of empowerment had been turned into a way of measuring myself based on how long it “should” take.

I am not saying it is wrong to set time goals; but it’s not right for me. I took something that had inspired me to believe in myself and turned it into some weird competition, a way to judge myself a success or failure. From now on, the finish line is a destination … the clock is just a thing that ticks. My best is my best. I own it. It is mine. That is all that matters.