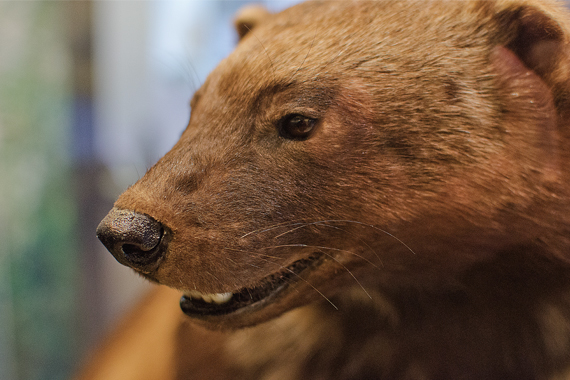 The wolverine is Michigan’s unofficial state animal. A powerful animal, it’s been referred to as Skunk Bear, Mountain Devil and Evil Spirit. One person even claimed that a wolverine “makes a Tasmanian Devil look like a sissy.”

According to National Geographic, the wolverine needs a lot of room to roam. It resembles a small bear but is actually the largest member of the weasel family. Individual wolverines may travel 15 miles in a day in search of food. Because of these habitat requirements, they frequent remote boreal forests, taiga, and tundra in the northern latitudes of Europe, Asia, and North America.

Wolverines eat a bit of vegetarian fare, but are tenacious predators with a taste for meat. They easily dispatch smaller prey such as rabbits and rodents, but may even attack animals many times their size, such as caribou, if the prey appears to be weak or injured. Because their fur has white patches, they are sometimes confused with skunks. Although not a skunk, a wolverine has scent glands that produce a strong, musky odor that they use to mark their territory. The animal’s teeth and claws are very sharp, and they are noted for their strength and cunning behavior.

University of Michigan athletic teams are collectively known as the Wolverines. In the mid-1920s, before the acquisition of a live wolverine, the team mascot for the U of M was a mounted and stuffed wolverine named Biff. In 1923, after seeing the University of Wisconsin football team carry live badgers at games, coach Fielding Yost decided to procure a wolverine. Despite writing letters to 68 trappers, Yost was reportedly unable to find one. In 1927, the Detroit Zoo acquired ten wolverines from Alaska, two of which Coach Yost had transported to Ann Arbor on Football Saturdays. Biff and Bennie’s first appearance came on dedication day of the Michigan Stadium in 1927. However, the pair grew large and more ferocious and so ended the practice of bringing the live wolverines to games.

In January, Genesee County residents had the rare opportunity to see Michigan’s “lone” wolverine traveling exhibit at Courtland Center Mall in Burton. The display featured taxidermy of the last-known Michigan wolverine that was discovered in 2004, when a group of coyote hunters spotted the lone female in the state’s rural Thumb region. Their sighting caused a stir among the state’s residents, who marveled at her solitary existence and wondered how and why she arrived here. It was the first confirmed wild wolverine living in Michigan since the 1800s.

Over the next six years, the lone creature lived in the heavily wooded Minden City State Game Area, subsisting on beavers, hares and other prey until her death at age nine. Her carcass was discovered by a couple hiking through the area in late winter, 2010. After being stuffed and mounted on a tree limb, the lone wolverine exhibit embarked on a tour of the state. To this day, how the lone wolverine made its way to Michigan is still a mystery.