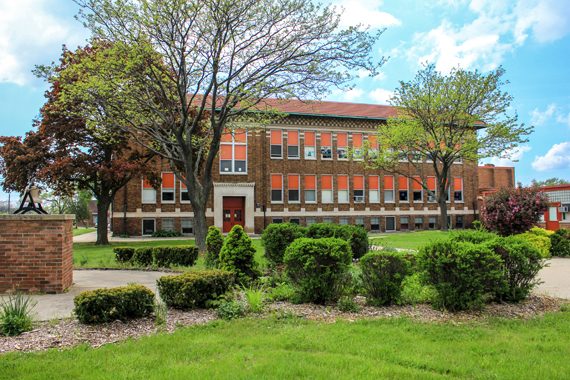 With summer in full swing and the drudgeries of school days a distant memory, the reader may feel it a grievous tax on his time to study an article about education. But let’s take a moment to recognize a man who will not be returning to school when the hot summer sun is replaced by the harvest moon. Daniel Berezny, an exceptional Flint educator, retired in June after a 23-year career dedicated to the Flint Community Schools.

Have you ever met someone who claimed that their whole heart was devoted to a project or cause, only to discover later that they had cut corners, skipped out on the hard work, or faltered in the face of adversity? Meet Mr. B, a man who will restore your confidence in the idea of a faithful man.

Daniel Berezny, Principal of Durant-Tuuri-Mott Elementary School, is a man unfamiliar with the concept of vacation. Since being hired as Assistant Principal in 1990 and promoted to Principal in 1992, Berezny tirelessly served the schoolchildren at DTM. Wait a minute, you may say, surely he had the summers off? Nope. He worked summers, too; moreover, Mr. B volunteered and worked at the Flint Olympian and CANUSA games every summer since 1974. “I was born, raised and schooled in Flint,” he said, “and I believe that Flint Community Schools can provide the best education for children because it was best for me.” Berezny has always been passionate about making DTM as safe as possible, knowing that a child who doesn’t feel safe can never excel in his studies. “When I first got here,” he recalled, “I told each one of my staff, ‘If it’s not good enough for your own child—if you wouldn’t send your own son or daughter here for their education—then it’s not good enough, period.’”

Without any fancy funding, the DTM staff goes out of their way to engage students throughout the day. Each morning, everyone in the school stands together to recite the Pledge of Allegiance and the DTM Motto. The motto is an affirmation of each student’s potential and goals, stating, “I am somebody. I will do great things. I will learn and succeed. I am a DTM student.” Similarly, lunchtime is run in a fashion different from that of most schools. Lunch and Learn is a program that Mr. B instituted along with some staff members over 15 years ago, after hearing about it at a workshop. Instead of a cafeteria-style lunch, which can open the door to bullying and formation of undesirable cliques, students sign up for various activities to participate in during the 40-minute lunch period. After eating with a teacher, children proceed to their chosen activity, such as swimming, sign language, Crim training, etc. “The program works,” says Mr. B. “It is proven that when children have choices, they are more apt to be actively engaged in their learning.” Mr. B oversaw daily activity on the jungle gym, and said that the Lunch and Learn program made lunchtime his favorite part of the day because it gave him face-time with his students. “I loved the interaction with the children,” he said.

Hands-on learning is a priority at DTM, right behind safety. Every year the staff packs up all the students, including the school’s 120 special needs children, and takes them on a field trip. Past excursions have included visits to the Children’s Museum, Kettering University, a bowling alley, and a roller-skating rink. This year, DTM celebrated its 90-year anniversary, and a big party was held to celebrate, complete with bounce houses, a hotdog lunch, cupcakes, and mementos for the kids. As part of the celebration, the children in the Special Education program competed in a swim meet, which Mr. B considered a great success. DTM was also one of 23 U.S. schools selected as a stop on Burpee Home Gardens® nationwide “Grow Anywhere” tour in May, thanks to a multitude of votes by school and community members. Burpee Gardens distributed 1,500 pounds of fresh produce, 450 vegetable plants, and gardening resources, making DTM a hub for community involvement and positive change. Knowing that community participation is important to learning, Berezny worked hard to make DTM a place where students and their families can grow and learn together.

Principal Berezny describes education as his life’s calling, passion and honor. Thanks to him and his staff, DTM is a safe, cheerful place for its students, although he cautions that running the school was “not all cookies and cream.” Despite the difficulties, parents agree that the principal’s open-door policy and sincere interest in each student made the difference. Autumn Rummel, mother of DTM fifth-grader Jacob Ahlgren, said, “I was terrified by the thought of putting my three boys into a Flint public school, but I quickly came to appreciate and respect the positive and learning-focused atmosphere that Dan Berezny created at DTM.” She also says that her children have learned so much more than math and reading there: “Because of the vast diversity here, my children will never have a fear of people with disabilities or different ethnicities; they have learned character-building lessons at this school that will follow them throughout their lives.” She concluded, “Mr.B is leaving behind some really big shoes to fill.”

While health issues required Mr. B to exit the sphere in which he influenced so many young lives, he assured My City Magazine that he won’t disappear from the school entirely. “I’ll still help out in any way I can,” he asserted. As for the rest, he faces the future squarely. “The Lord has a plan for me,” he replied serenely when asked about preparing for life after school. Whatever his method, Daniel Berezny means to do what he has always done: contribute to the betterment of his community.

A man who has worked in the same place for 23 years, inhabited the same house for 30 years, and lived in the same town his whole life: this is someone whose devotion is unquestionable. Moreover, he leaves to his successor a well-run school that children enjoy attending. Surely, at the end of his time at Durant-Tuuri-Mott Elementary School, he deserves the accolade, ‘Well done, good and faithful servant.’ We could all stand to learn from the steadfast Mr. B.

Are you interested in purchasing photos from this story? Go HERE and select the “Dan Berezny, The Legendary Mr. B” category.