It’s often been said that a good pilot is always learning. That philosophy certainly applies to Joe Taylor, Flight Instructor with the Greater Flint Pilots Association (GFPA). Members of the GFPA own equity shares in four single-engine airplanes, which are housed at Bishop International Airport. Members use the planes for personal flights and for instruction. 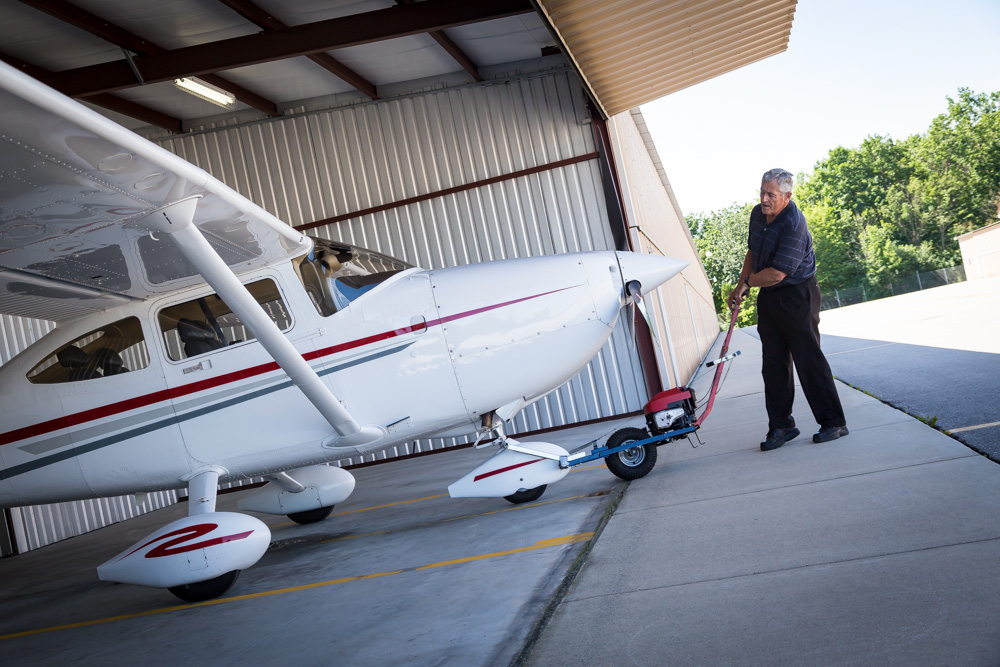 Joe is one of two full-time flight instructors with the GFPA, along with three additional instructors who are not members. “I’ve always been interested in flying,” says Joe, who enjoys sharing knowledge with his students. He attended college at the General Motors Institute (GMI), which is now Kettering University and retired from GM after 42 years in engineering. “The GFPA is not a flying school,” he asserts. “We provide flight instruction using the club’s planes.”

Flight instructors must teach several components: understanding the aircraft’s system, aerodynamics, navigation and electronics, aviation regulations and meteorology, which Joe says is especially important. “Every pilot becomes an amateur meteorologist,” he says, with a smile. “There is no exact science with meteorology.”

According to the instructor, teaching someone to fly a plane is a stair-step process, and the instruction is tailored to the individual. “Some people breeze right through it,” he admits, “and for others, it’s a lot harder.” It is a two-part process: knowledge, and actual flight. And, it is all taught very meticulously, Joe adds. “We use the Private Pilot’s Manual – it has good photos and gives examples.” During actual lessons, the first thing students learn is the pre-flight inspection. Joe uses a building block technique, explaining to the student what to do and why it’s done. The student learns to make sure the plane is airworthy and that it is in compliance with recent inspections and safety regulations. “A pilot has a huge responsibility,” Joe says. 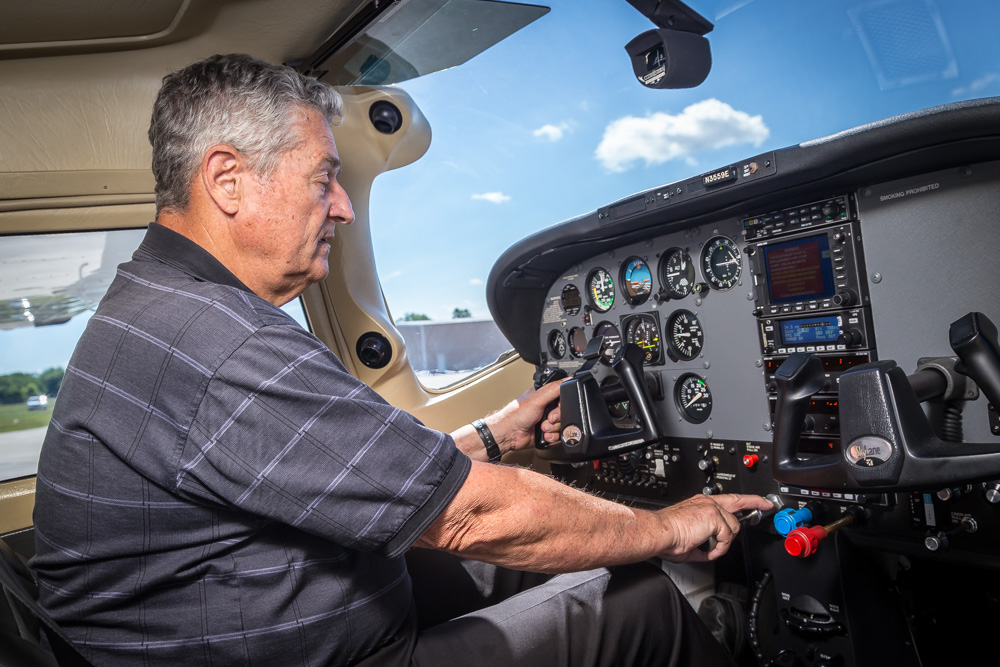 Also covered in flight instruction is ground handling, how to taxi and take off, flying at a constant speed, basic maneuvers, using the throttle, climbing, understanding the aircraft’s limitations, and how to slow down on landing. He also teaches how to fly during nighttime hours.

One of the most important things Joe teaches students is how to be safe in the event of unanticipated circumstances, such as a malfunction of the airplane or unexpected weather conditions. “This is the ultimate test,” he says. One famous accident was the private plane crash that killed John F. Kennedy Jr. on July 16, 1999, in the Atlantic Ocean off the coast of Martha’s Vineyard, Massachusetts. “It’s almost never one single factor that causes an accident,” says the instructor, “and it was a chain of events that led to that crash.” Kennedy was flying at night over open water. It was dark, and then it got foggy. “He could have prevented it,” Joe adds. During his many years of flying, Joe has never had an accident.

The most dangerous parts of a flight are the takeoff and landing, because you are closest to the ground and have less time to react, he explains. According to Joe, the safest form of aviation is a commercial airline, because those pilots fly many hours and must adhere to very stringent rules, and they have to be tested every six months. 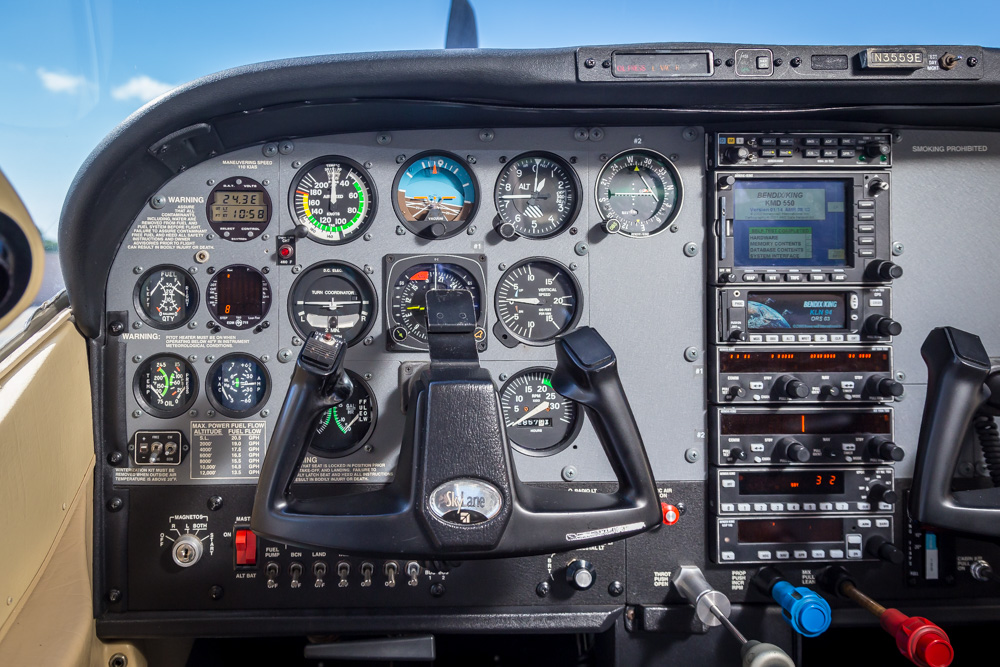 When dealing with an unexpected situation during a flight, the psychology of the five stages of grief (denial, anger, depression, bargaining and acceptance) apply. “Acceptance is the place the pilot must get to as quickly as possible,” Joe asserts. Bob Hoover, a famous air show pilot who escaped a German POW camp by stealing a plane, is well known for crashing 15 times and living to tell the story. “What kept him alive was that he was able to get to the acceptance stage very quickly,” Joe explains. 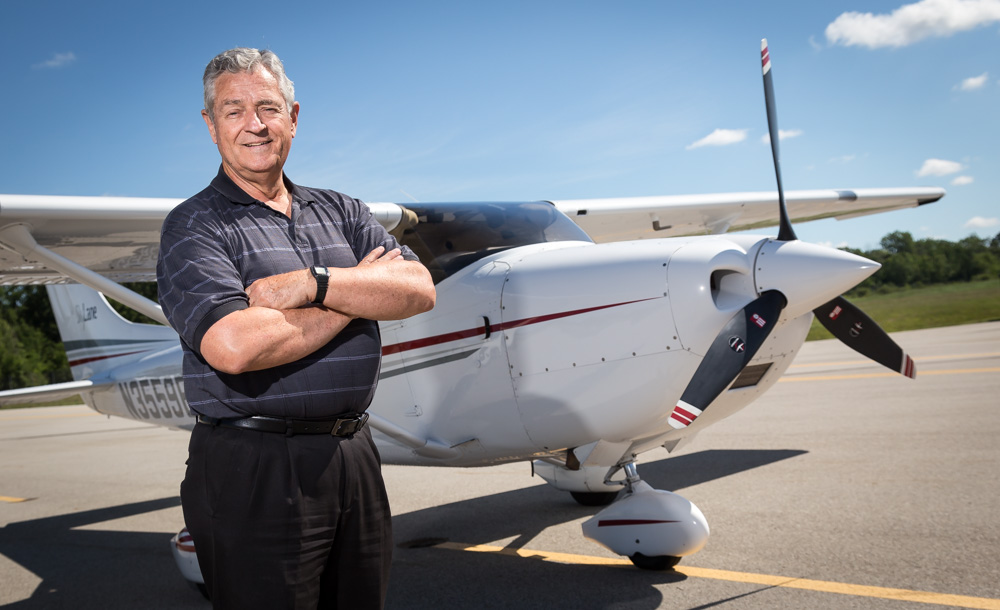 Over the years, Joe has taught more than 300 people to fly and currently has three active students. The sad part, he says, is that over half of those who start flight school never finish. “It’s too expensive or more demanding than expected, and they didn’t want to put in the effort,” he admits. “It is a rigorous program.” As a flight instructor, the most difficult part for him is letting an inexperienced pilot handle the airplane. “That’s very hard to do,” he says. “Teaching someone to fly involves hours of boredom and moments of panic,” he laughs.

Regardless of that, Joe truly enjoys being a flight instructor. “I love seeing people realize what they want to do and become successful at it,” he says. “It’s a constant learning process. There is always something new.”

The Greater Flint Pilots Association wants to help future pilots realize their dreams of entering the world of aviation. Incorporated in 1975, the non-profit organization is dedicated to the safety and advancement of aviation. According to Harry Hammond, Scholarship Director, the GFPA awarded its first Michigan Takes Flight – David S. Jones Memorial Flight Training Scholarship in June. The recipient is 17-year-old Jack Matthew Leonard, a Grand Blanc resident and Goodrich High School student. He will receive instruction from his mentor, a Delta Airbus captain and long-time GFPA member, and from other GFPA instructors. Jack’s goal is to become an airline captain by age 30.