At Todd’s Tavern, the conversation was boisterous. Pioneers and travellers from throughout the new country were sharing stories of new lands and new adventures. The air was one of triumph and good cheer. In the corner, tucked away from the revelry, sat Benjamin Pearson, a New Yorker. He had heard tales of the beautiful Michigan land and travelled far to see it. He was amazed – the land was exactly as they said it was, and more. Filled with game, winding rivers and rolling hills, it was to be his new home. As he sat in revelry, four more travellers entered the tavern. Pearson couldn’t contain his enthusiasm when he learned the men were also looking for land and hailed from the county of his birth. The four men were Lewis Buckingham, Isaac N. Robinson, John Pratt and Richard Marvin. Hoping for them to be future neighbors, Pearson took the four men to the area he had chosen to settle. Three of the four were in awe of the natural splendor. The next day, the men made a trip to Detroit and entered their claim. All but Marvin became some of the first residents of the land that would one day become Mount Morris and Genesee Township. 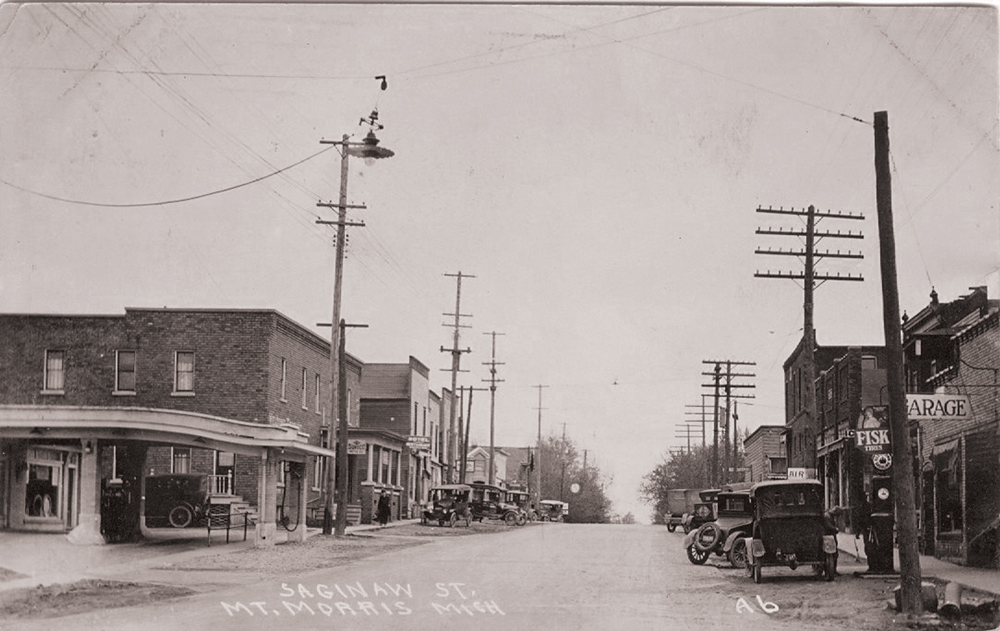 Benjamin Pearson’s invitation north was the pivotal point of Genesee County’s expansion. The lands south of Flint were rapidly populating with pioneers, each content with settling in the first open tract of land they found on their journey north from Detroit. After Pearson, however, settlers pushed past Flint to brave the northern wilds and the area filled quickly. Pearson (or “Uncle Ben” as he was called by friends and neighbors) was the first landowner in the area of Mount Morris, settling in May of 1833. The first to settle the area of Genesee Township is in debate, with Luman Beach and Addison Stewart both laying claim to the title. Both settled a little more than a month after Pearson with Mrs. Addison Stewart claiming to be the first woman on the Saginaw Trail north of Flint. 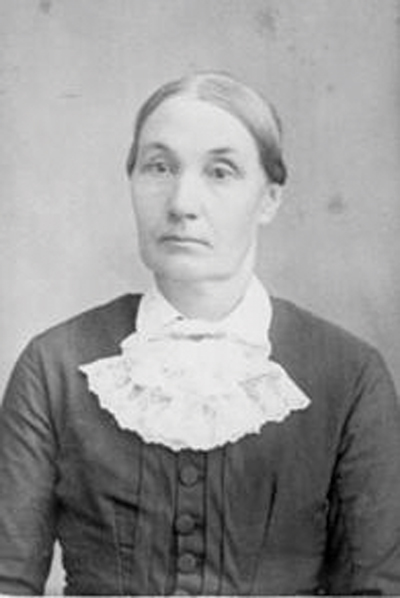 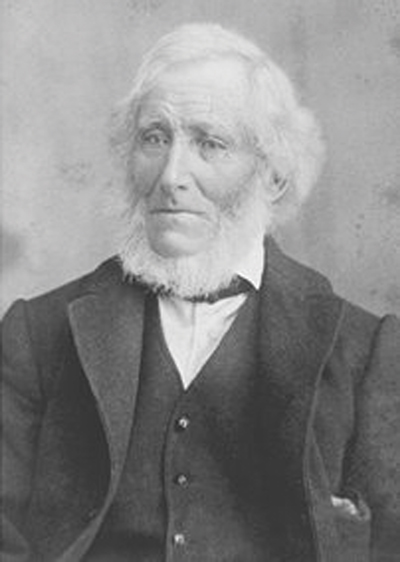 Lewis Buckingham, John Pratt and Isaac N. Robinson were next. After that fateful meeting with Pearson at Todd’s Tavern, the men returned to their homes in the town of Mount Morris in Livingston County, New York. They gathered their belongings, said their goodbyes and by September were building their new homes in Michigan. They were soon joined by the Asahel Beach, Dickinson and Ballard families. This core group of pioneers formed what became known as the Coldwater Settlement, named as such because each and every man in the settlement was a teetotaler who abstained from all drink, which was quite rare in the early time. They were also believed to be men of vigorous health and voracious eaters. Thus, the settlement was also called Hungry Hill by its neighbors. So wholeheartedly did the Coldwater settlers believe in total abstinence from alcohol, that the first church organized in the home of Lewis Buckingham made the rule official: “Art. 3. We believe that the manufacture and vending and use of all intoxicating liquors, except for medical and manufacturing purposes, is morally wrong, and consequently do agree to abstain therefrom.” 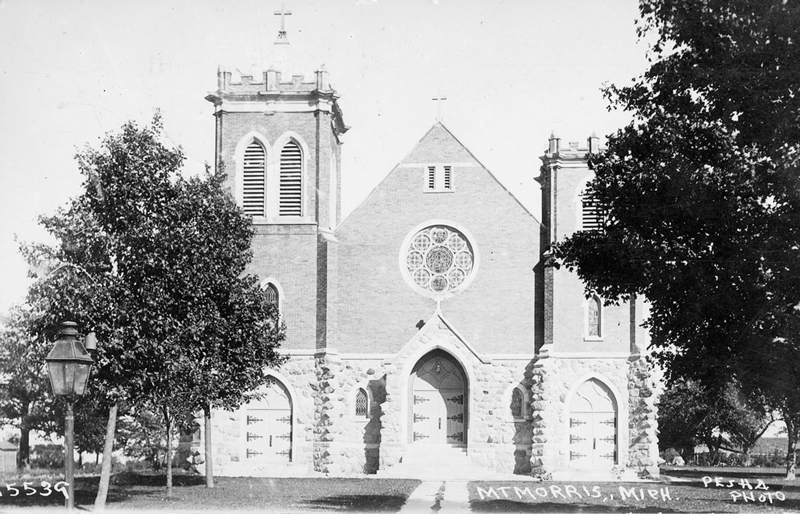 The next year, the area’s first child, Damon Stewart, was born. He grew up with some renown and served in the Civil War with the area’s proudest regiment, the Flint Union Blues. Stewart was injured in the battle of Williamsburgh, survived and came home a hero. During the time of his birth, the first church in the area was created and housed in the home of John Pratt. This gathering went on to become the First Presbyterian Church of Flint.

In 1835, just north of the Coldwater Settlement, Sherman Stanley from Mount Morris, NY laid claim to the grounds that would become the Stanley Settlement. Three years later, he was joined by other families from the same town. These families include: the Simons family, Ezra Stevens family, Tompkins, Snyders, Hunts, Daly and Cooley families. The current Stanley Road was named after the man and settlement.

In the winter of 1835, the first school began in the house of Lewis Buckingham and was taught by Miss Sarah Curtis. The first log school house was built two years later and children learned under the tutelage of Miss Harriet Hoyes.

Around 1836, Genesee County was gaining notoriety and forming its government. Buckingham was named the county’s first sheriff and moved his family to Flint, the growing county seat. As Buckingham moved out, another prominent county citizen moved in. Charles N. Beecher set up his homestead in the later months of 1836. He served the county in multiple capacities throughout the years as a state representative, township supervisor, postmaster, county commissioner and judge. In 1854, Beecher moved to Flint where he lived until his death ten years later. His legacy remains today as the unincorporated Beecher community that lies between Mt. Morris and Flint. Beecher School District bears his name and the first Beecher school house was built in the community in 1848. Shortly after the arrival of Beecher, Edwin Cornwell and Frederick Walker came to town. Cornwell became a highly successful farmer and once boasted of killing 19 wolves during his first winter. Walker was the first man to settle in the area that would become the City of Mt. Morris. He was the first postmaster of the village and a prominent member of the state legislature. 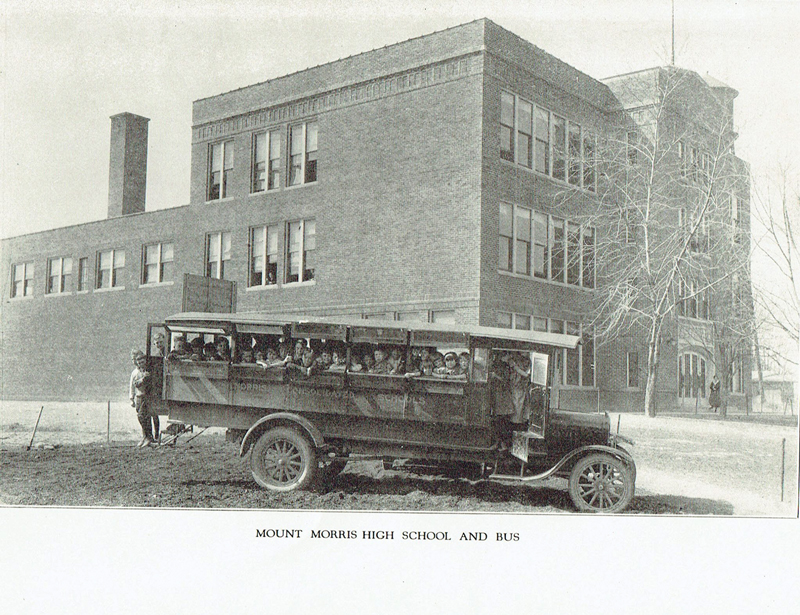 The year 1838 brought great change to the area. The state legislature decided to separate the area north of Flint into two townships, Flushing to the west and Genesee to the East. The two counties were brothers, but the inhabitants were separated by a vast forest. It was rare for the settlers to see each other and although united, an intense rivalry began to grow. The first meeting of Genesee Township was held in the Coldwater Settlement in the house of Juba Barrows. Toward the end of 1838, the township’s first death was registered for young Abigail Stewart who choked on a screw.

Pioneers continued to move in and 1839 brought William S. Pierson to Genesee Township. Pierson was a great farmer and highly-respected individual. Pierson Road bears his name. The next year, the first cemetery – built by John Upton – held its first burial, that of Horace Freeman who was killed by a falling tree.

The state legislature struck again in 1855 when it carved a new township on the border of Flushing and Genesee Townships. Initially called Dover, Mt. Morris Township was created and named in honor of the residents’ former home in New York. 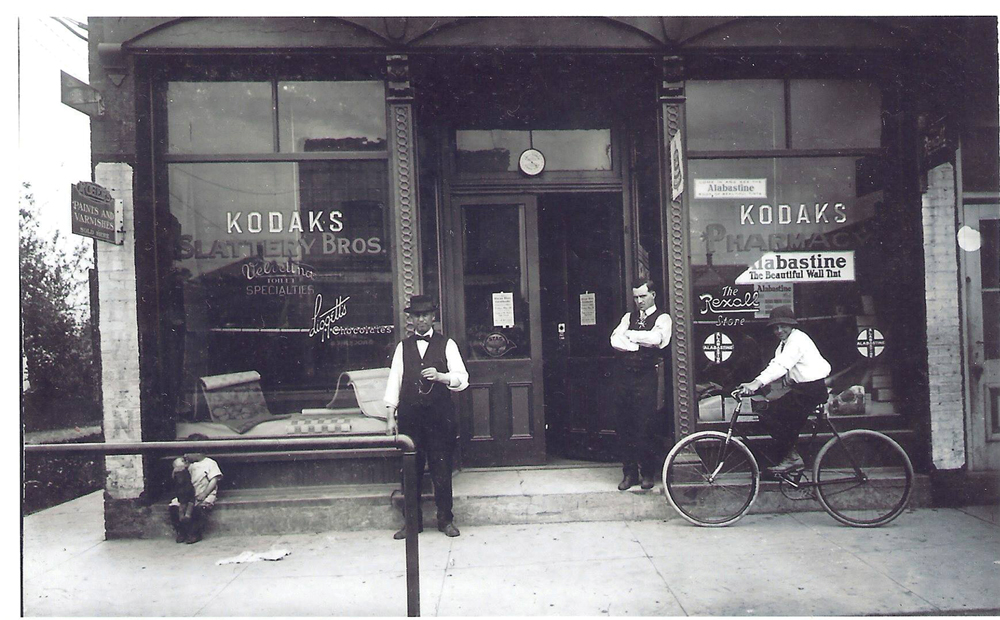 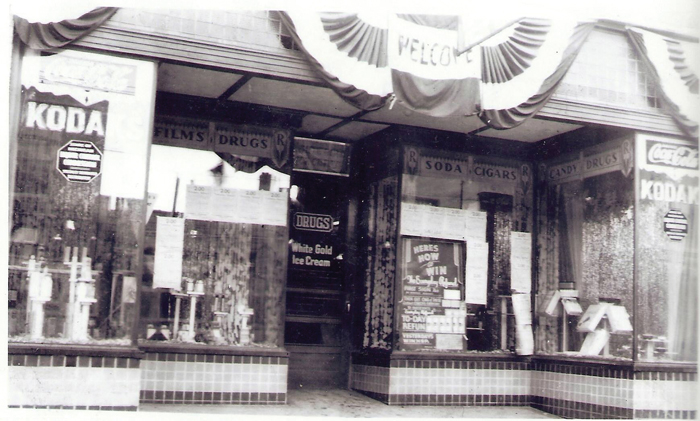 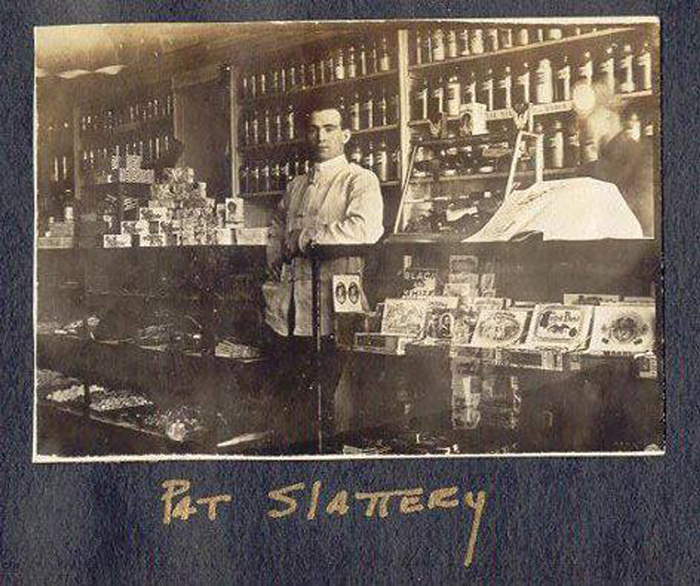 Before the village of Mt. Morris could be situated, two men, Reuben McCreery and Simon King established the unincorporated Geneseeville. The small town received a post office in 1859, its first store opened by Nathaniel Blackmer and its first hotel in 1872 by William Alexander. In 1875, McCreery built the area’s second bridge over the Flint River, the first having fallen into misuse. McCreery continued to influence the county by serving as treasurer and sheriff, twice each. 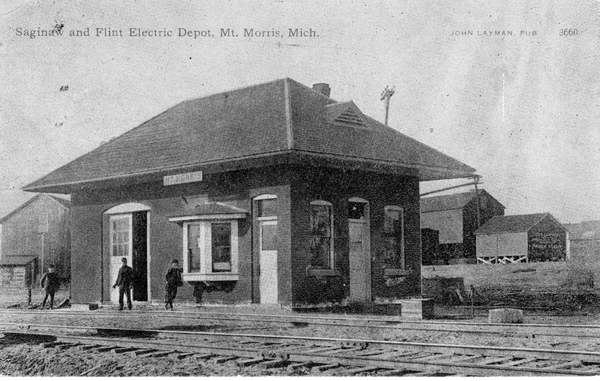 Geneseeville seemed to be off to the races were it not for the establishment of a railway station at the village of Mt. Morris. When the first locomotive made town in 1862, it became obvious that a village would grow and five years later, the Village of Mt. Morris was incorporated with the help of Frederick Walker. Mt. Morris grew quickly and luckily in 1869, established its first fire department because in 1871 and 1872, fires threatened to wipe the village off the map, the latter destroying nearly 25 percent of it. In 1868, Dr. Hiram Bardwell came to town. A Civil War veteran and prominent intellectual, Bardwell hailed from Burton and would serve the township until his death. At the end of the year, the Catholic Church of Mt. Morris would form under the guidance of Charles Hughes providing a place of worship to the many new Catholics who had moved into the area. 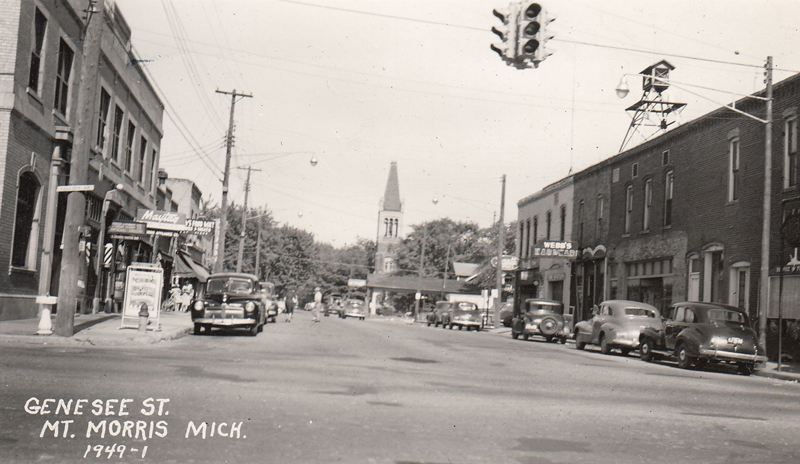 In 1849, prominent members of the Genesee County Agricultural Society attended Michigan’s first state fair in Detroit. They were in awe at how greatly attended and enjoyable it was. Upon arriving back home, the society decided that a Genesee County fair was in order. The next year, they held the first Genesee County Fair in Flint on the empty grounds next to the Methodist church. The fair was a hit and the society continued to hold it on a small tract of land donated by local philanthropists until in 1854, when the land was annexed by the growing Flint city. The society disbanded but in 1871, was reborn. Land was found and the fair continued, eventually moving to grounds in Mt. Morris where it has prospered as one of Mid-Michigan’s best attractions. In 1969, the E. A. Cummings Center was built on the grounds.

In 1929, the little village of Mt. Morris became a city and its residents were enjoying it. In 1935, the Mt. Morris Thursday Club opened a small library downtown in a room over the state building. The library became popular throughout the years and in 1955, joined the county library system. The local Lions Club banded together and held a fundraiser and with the proceeds, built a new library attached to city hall. In 1974, the library moved to its current location on Van Buren Avenue. In Geneseeville, the Genesee-Johnson Library opened in 1960 after Halton Young donated the land with a stipulation that the old town hall become a library. 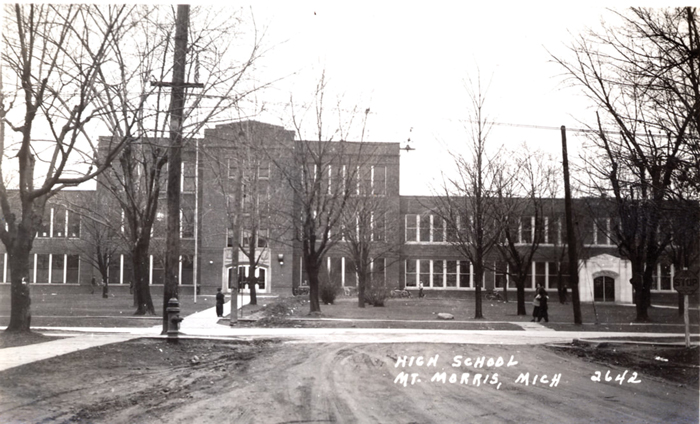 In 1936, the first Beecher High School was built and quickly followed by Northgate, George Street and Buick Elementaries. A new Beecher High School was completed but severely damaged by the catastrophic tornado in 1953 – still one of the most devastating weather-related tragedies in U.S. history. Beecher students attended class in buses parked near the site until repairs were completed.

To keep up with rapid growth, Mt. Morris built their new high school in 1920, which became Central Elementary. In 1941, Elisabeth Ann Johnson, class valedictorian, gave a rousing speech. She went on to study engineering at the University of Michigan in Ann Arbor and completed her bachelor’s degree in 1945. In 1949, Miss Johnson died after a long illness. Many years later, her father, August Johnson, donated a portion of his land to the school district for the building of a new high school with the only stipulation that they name it in memory of his daughter. In 1970, the Elisabeth Ann Johnson Memorial High School opened its doors for the first time. 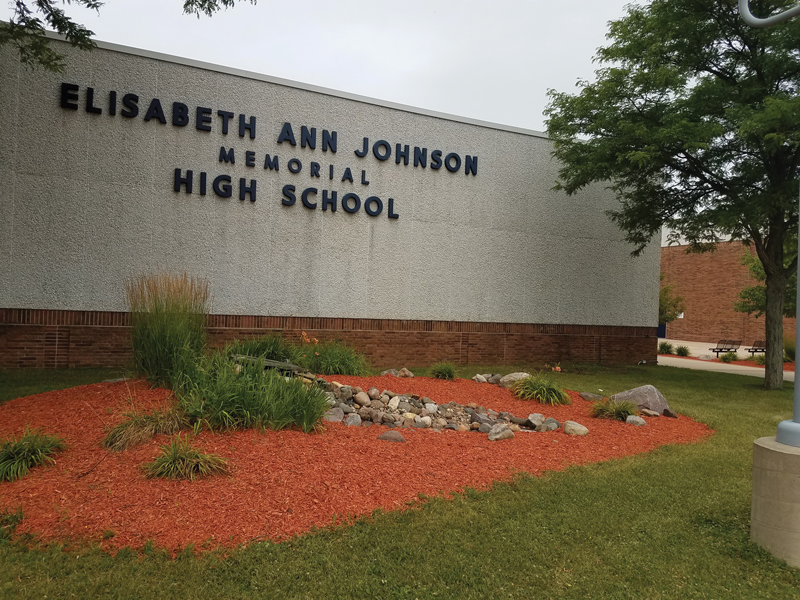 Genesee and Mt. Morris Townships have always been the county’s favorite area for nature and the great outdoors and 1972 solidified the reputation. When Charles Stewart Mott turned his eye on the area, he had a vision. Seeing the great potential of the beautiful area, he funded the building of the C. S. Mott dam in 1972. After completion of the dam and much land work, the local farmlands neighboring the winding Flint River became the new Mott Lake. The rest of Mott’s vision, which included a golf course, zoo, equestrian arena, fine arts center and more, never came to be after his death in 1973. 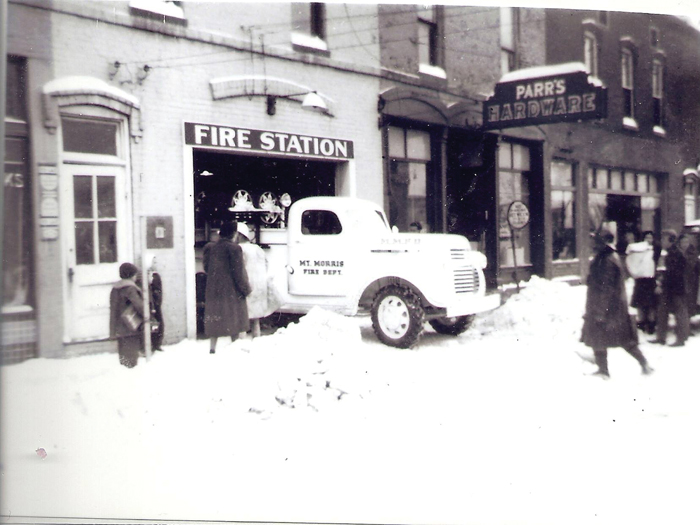 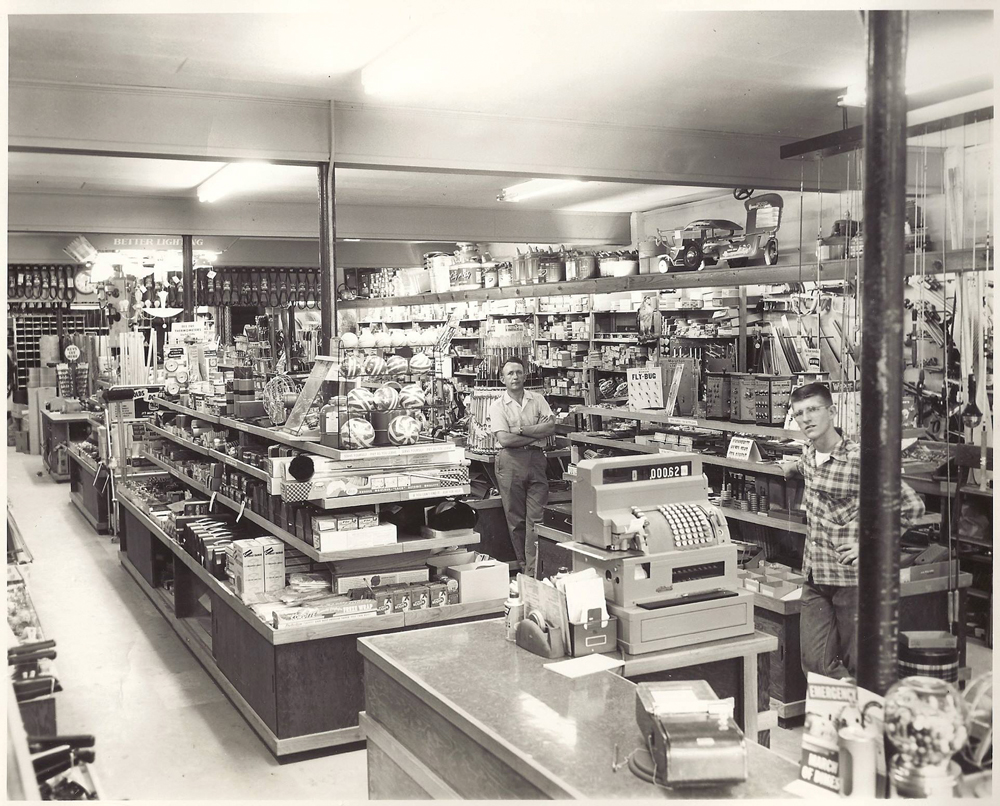 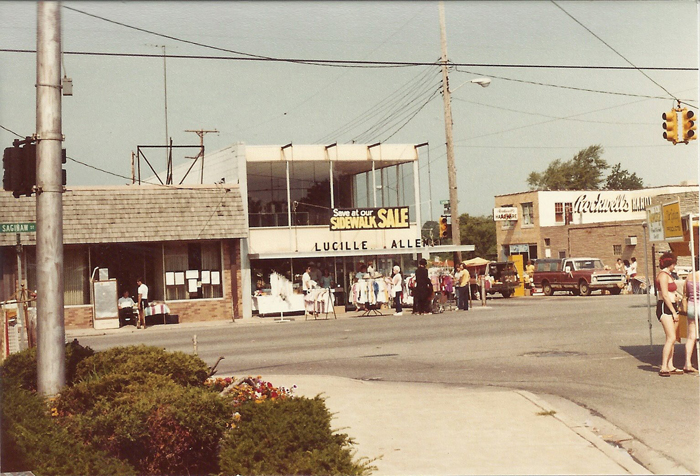 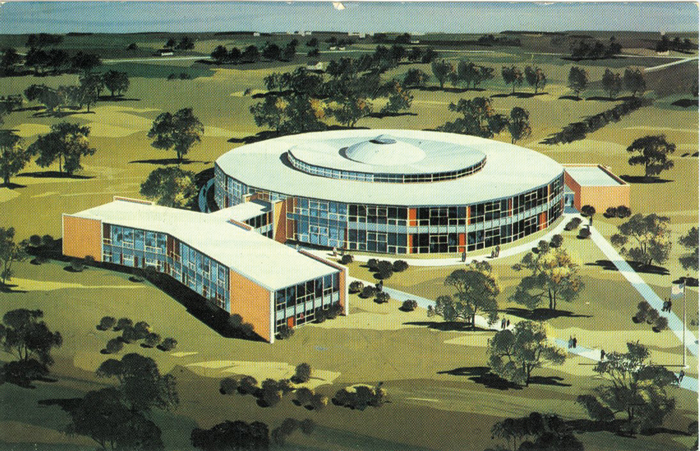 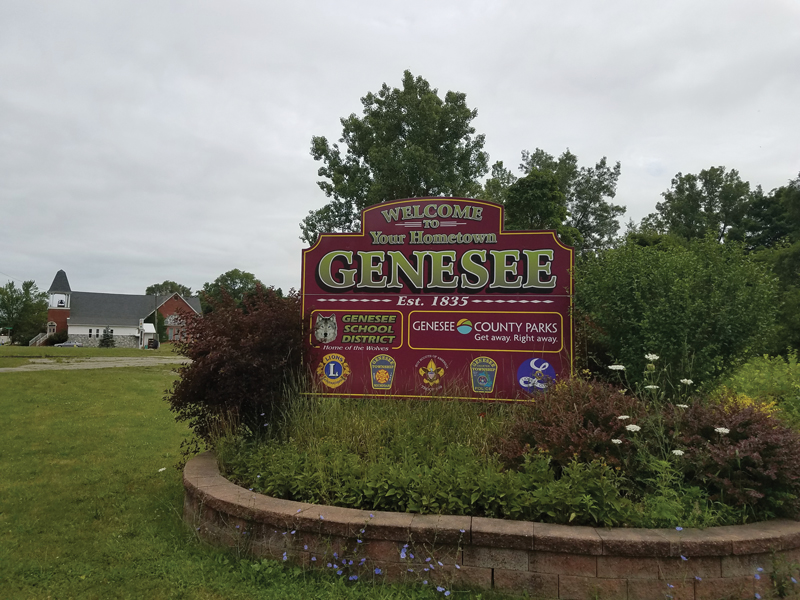 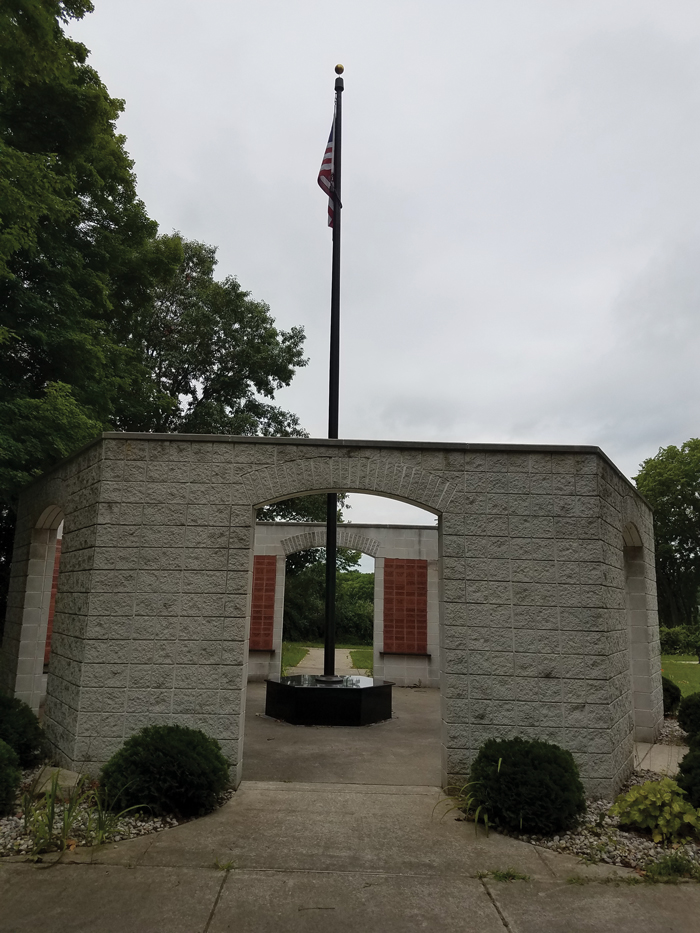 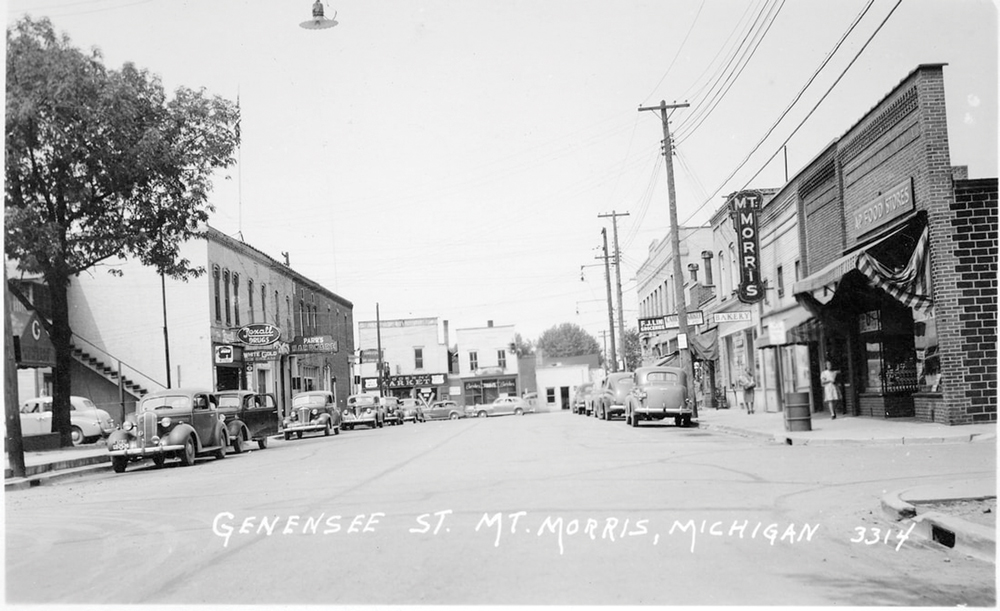 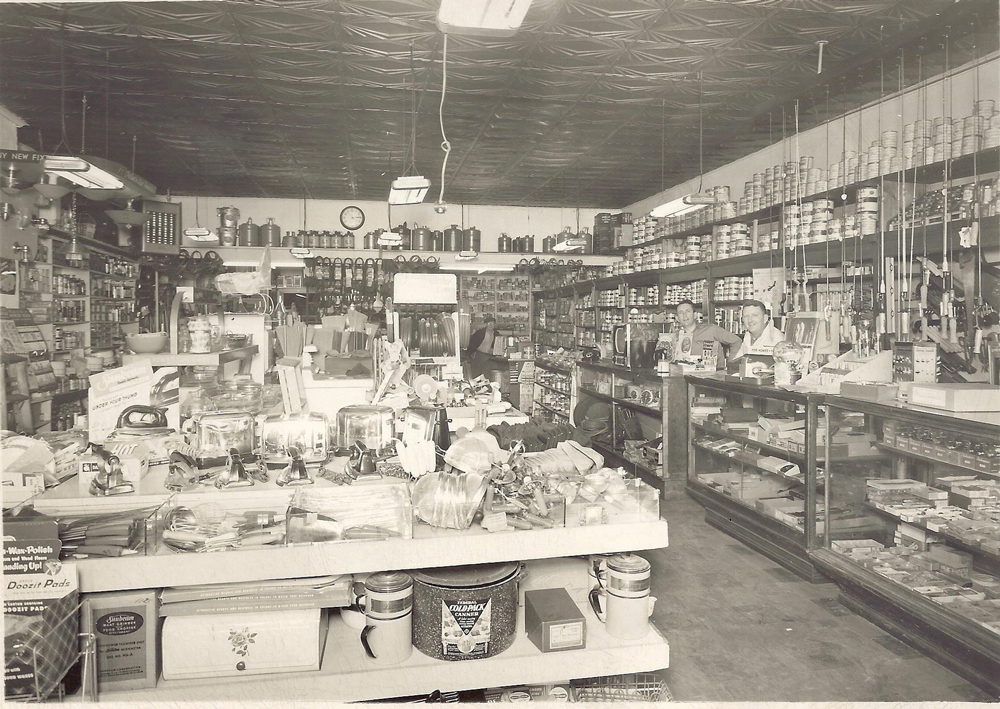 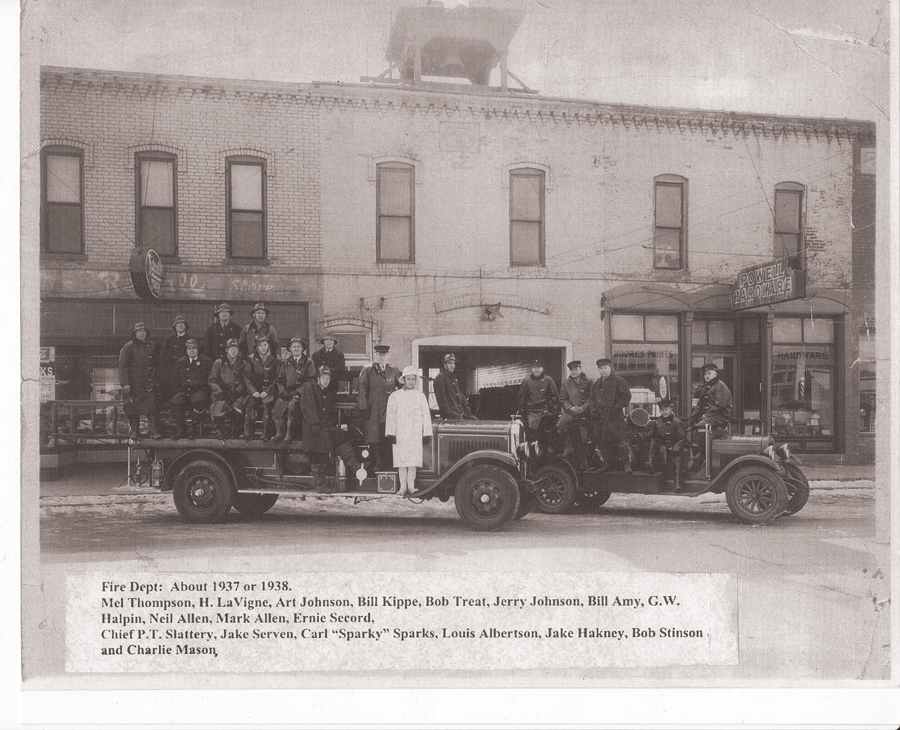 In 1976, the area became an entertainment focal point once again, when John West and Stanley Mahaffy came up with an idea to preserve the county’s historic buildings. Crossroads Village and Huckleberry Railroad were born on farmland granted by the Mott Foundation. In late 1976, Stepping Stone Falls was finished and named, via contest, by Miss Debbie Holbrook.

Mt. Morris and Genesee Township hold some of the most beautiful and pristine land in Genesee County. Benjamin Pearson was right when he told his four friends long ago that it was “some of the nicest land they have ever seen.” It is to be enjoyed and will continue to be a jewel in the heart of the county. 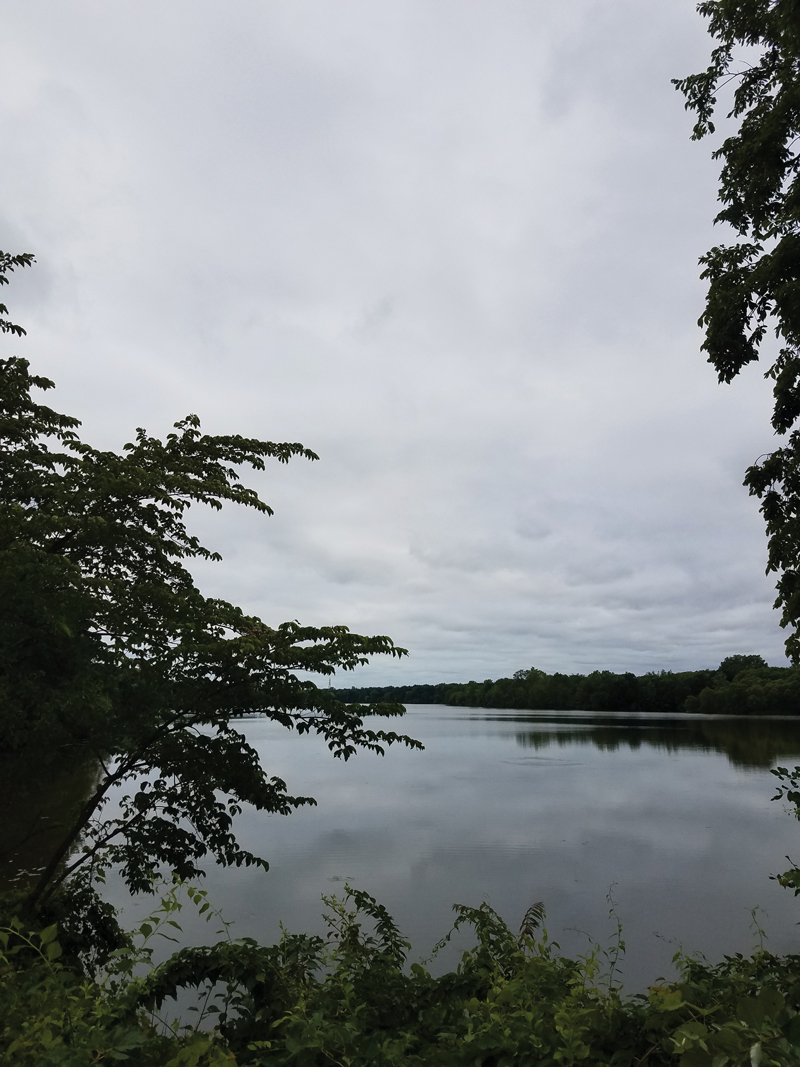