As his sons played in the field, Seymour Ensign packed up the last of his belongings. His wife watched over the two boys, her hand shading her eyes from the morning sun. Ensign’s friend, Thomas L. L. Brent, on whose lands he spent the first year of his life in Genesee County, was waiting to shake hands. In the township of Pewonigowink to the north sat the house Ensign had been working on for the last few months. It was finally finished and his family would be leaving Brent’s farm today to try their hand at pioneer life on their own. He tossed his rucksack into the wagon and called for his family. As they climbed into the wagon, he expressed his thanks to Brent who wished him well and good luck. Soon, the Ensign family was off to settle the last open land around. Ensign had found his home and couldn’t wait to join the other men and women with the courage and heart to tame the wild – to lay the foundation for the future of Genesee County. Hear, hear! To the pioneers!

When Charles McLean settled the lands north of Mt. Morris in 1833, land in Genesee County was at a premium. Each and every available parcel was being gobbled up quickly and the lands south of his property were just about full with pioneers carving out a living from the wilds. McLean set up shop along the old Saginaw Road, built a house and opened it as a hotel and place of entertainment to travelers making the trip from Flint to Saginaw. He did remarkable business in the early years and was soon joined by Sylvester Vibbard in 1833 and then, store owner Hiram Benjamin, Josiah Winters and Humphrey McLean in 1835. In 1836, the original village, named Vienna, was provided a post office and the township’s first white child was born, the daughter of Hiram Benjamin. The summer of 1836 brought a flood of pioneers to the area that included George Sparks, Waterman Neff (Neff Rd.), Clark Abbey, George Huyck and Reuben Warner.

In 1837, the state legislature saw fit to create a new township in the northern wilds of Genesee County and named it Vienna after the only established village within its confines. The township election was held at the home of Charles McLean and there, the villagers decided to change the name of the village to Pine Run (located at the intersection of Saginaw and Vienna Roads), after the small tributary that runs through it. That same year, the population was bolstered by the arrival of Russell G. Hurd (Hurd Rd.), William Hotchkiss, future Justice of the Peace Isaiah Merriman, Ed Maybee, Chris Hughes, Will Sissins and Joshua Pattee. Pine Run grew to include the post office, a blacksmith shop, stores, two saloons and two hotels, and thrived in 1855 when Russell Hurd built his grist mill.

Approximately one mile north of Pine Run, Ira T. Farrand settled and platted a small village to be known as Farrandville (located at the intersection of Saginaw and Farrand Roads). In its day, the village contained the Free Methodist Church and a small population of 15 dwellings. 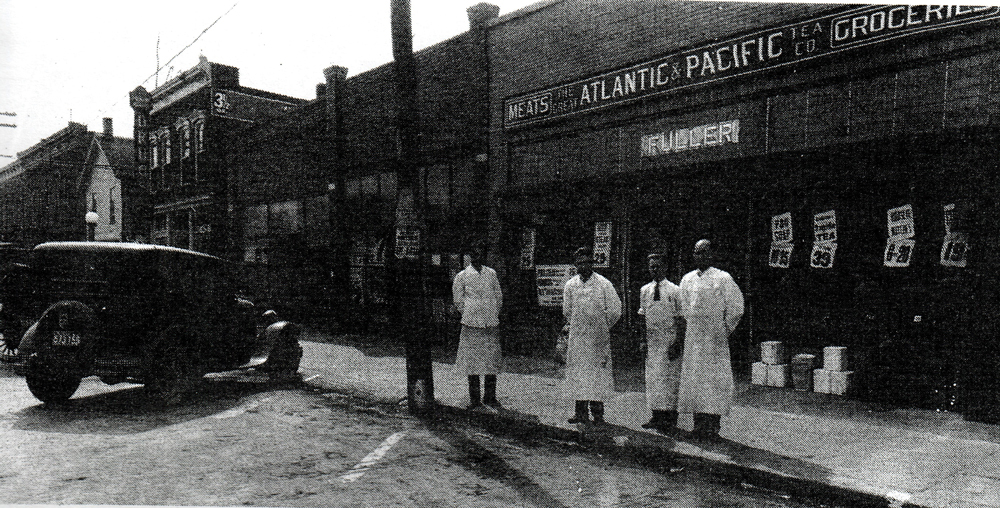 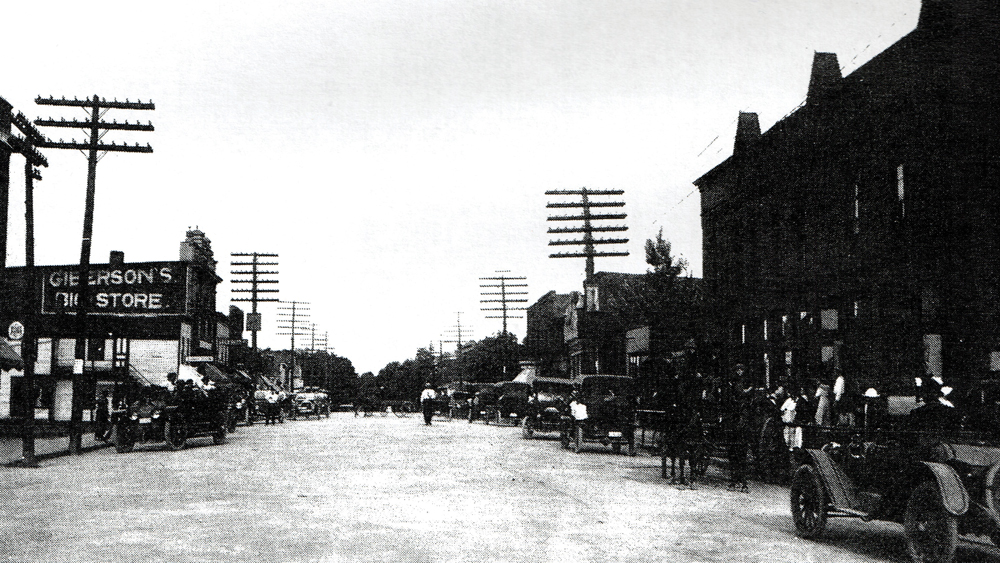 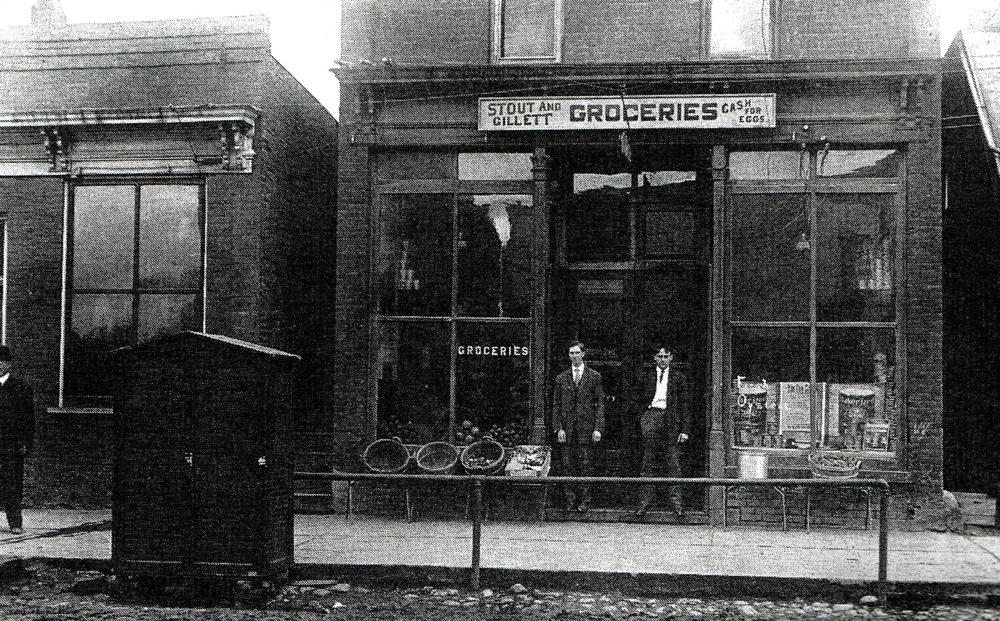 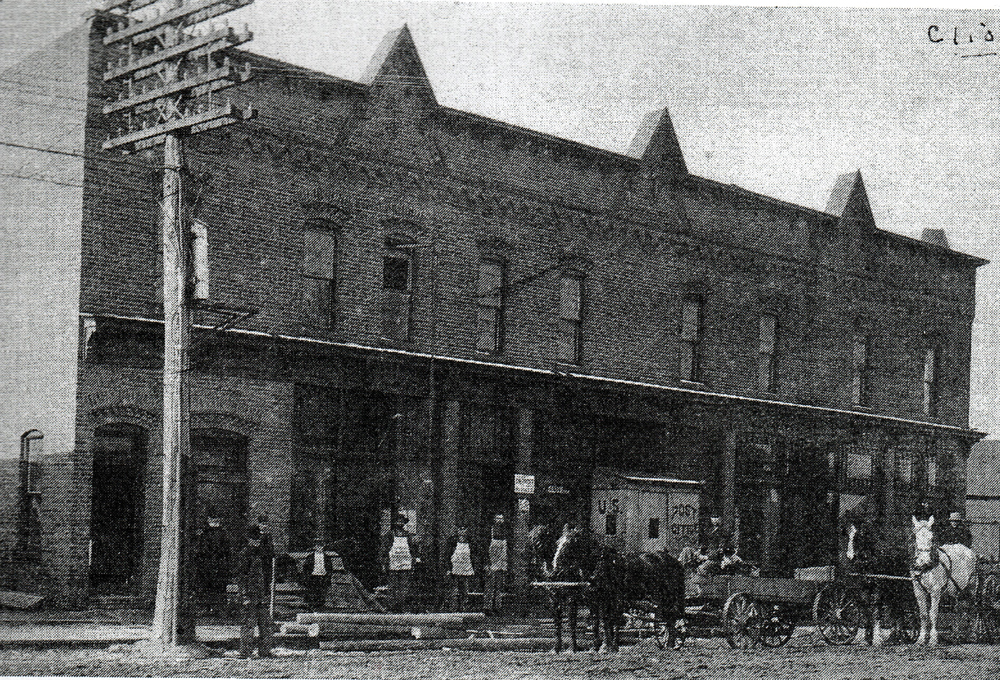 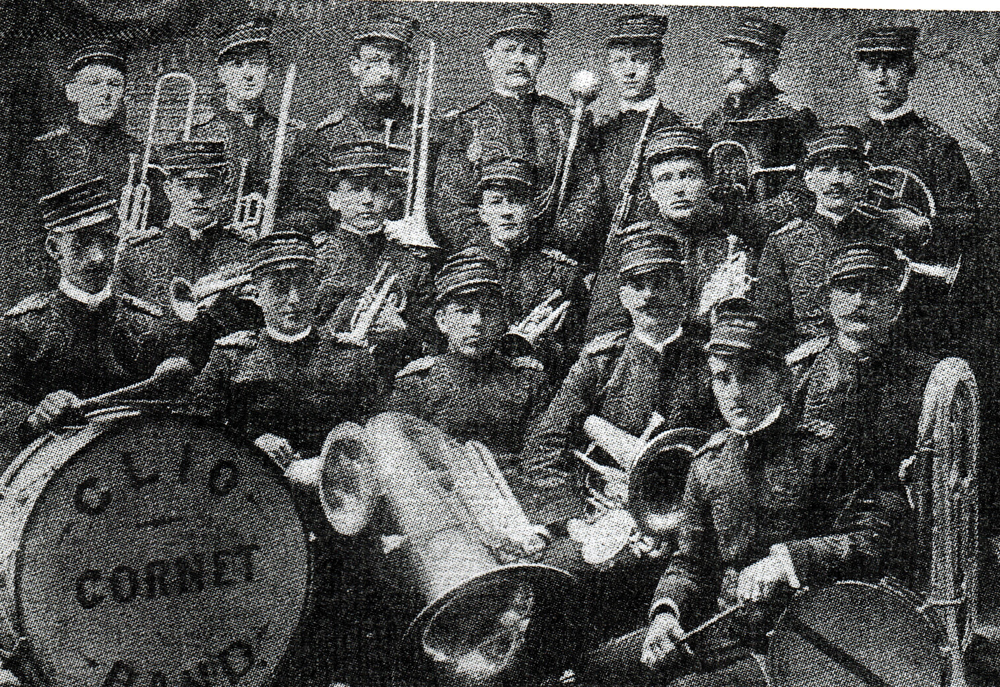 The first education system was formed in 1837 in the house of Charles McLean. The township was divided into two districts with the first school to be built in Pine Run and taught by Josiah W. Begole.

Industry first came to the township in 1838 when resident Theadore Dean erected a saw mill on the land that would become the city of Clio. Helped by the growing popularity of Pine Run, one Mr. Varney, an industrialist, established a grain elevator and in the early 1850s, Austin Griffes opened a successful grist mill. There, the small village of Varney was founded.

Things were moving quickly for Pine Run until in 1861, when a proposal was made to build a track of the Flint & Pere Marquette railroad through town. For unknown reasons, the proposal was rejected. Instead, the railroad was built through the small village of Varney, which effectively ended Pine Run’s exponential growth.

Pine Run’s loss was Varney’s gain, and with the addition of the new railroad, it began to prosper. A village was platted and made official in 1873. Lumbering grew, stores and hotels were built and citizens flocked to town.

In 1864, Colonel Hill, fresh from Civil War action, operated a hotel in Varney, known as Revere House. He took issue with the village name of Varney and made a push for naming the village “Clio” after the Greek goddess and muse of history and poetry. His plea fell on deaf ears until a party one night at his hotel, when he found himself surrounded by a flock of the area’s most learned ladies. Emboldened, Colonel Hill expressed his idea and the ladies decreed it to be so. The village of Varney was no more; it was then to be known as Clio. 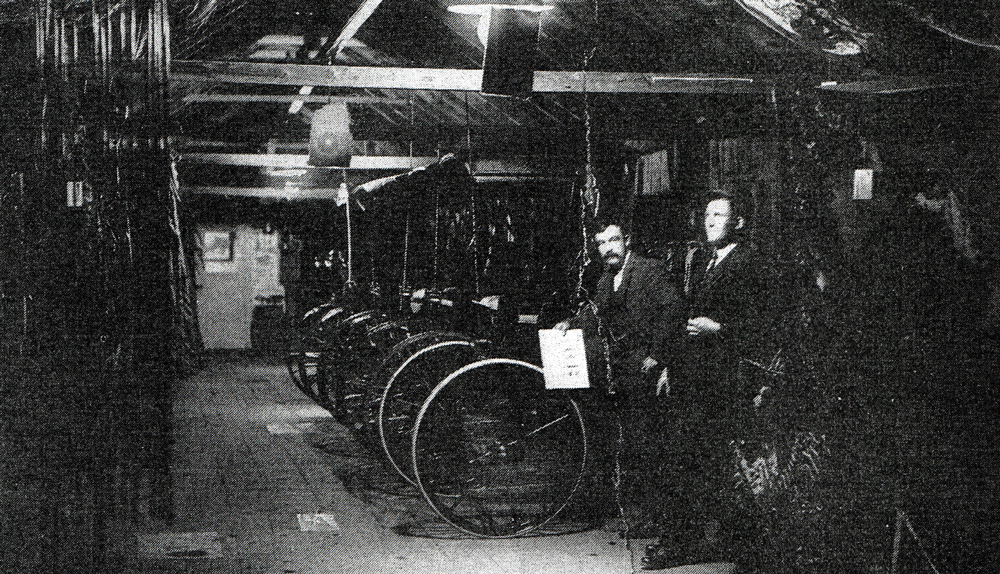 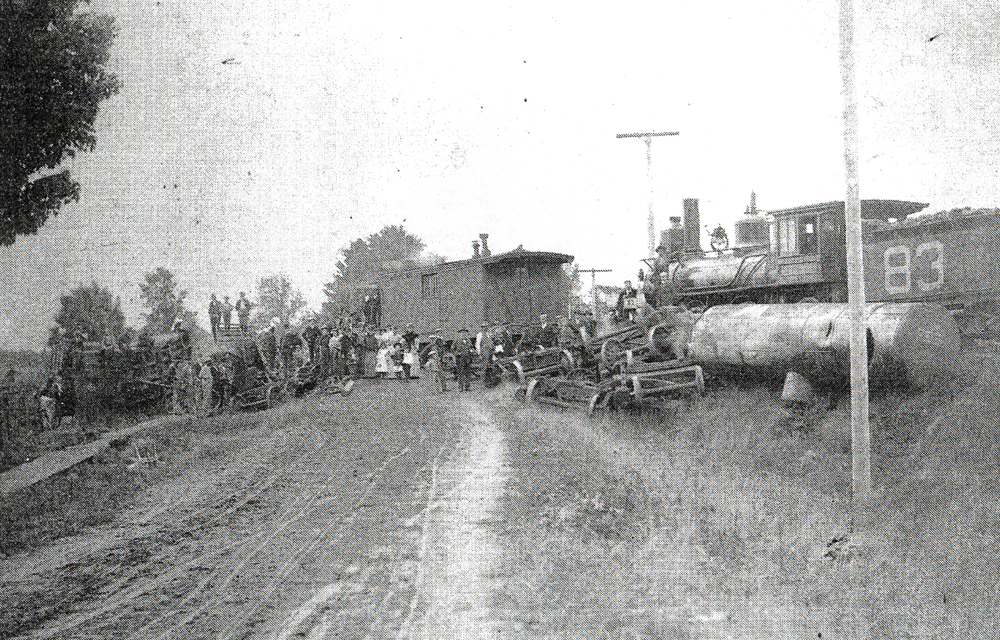 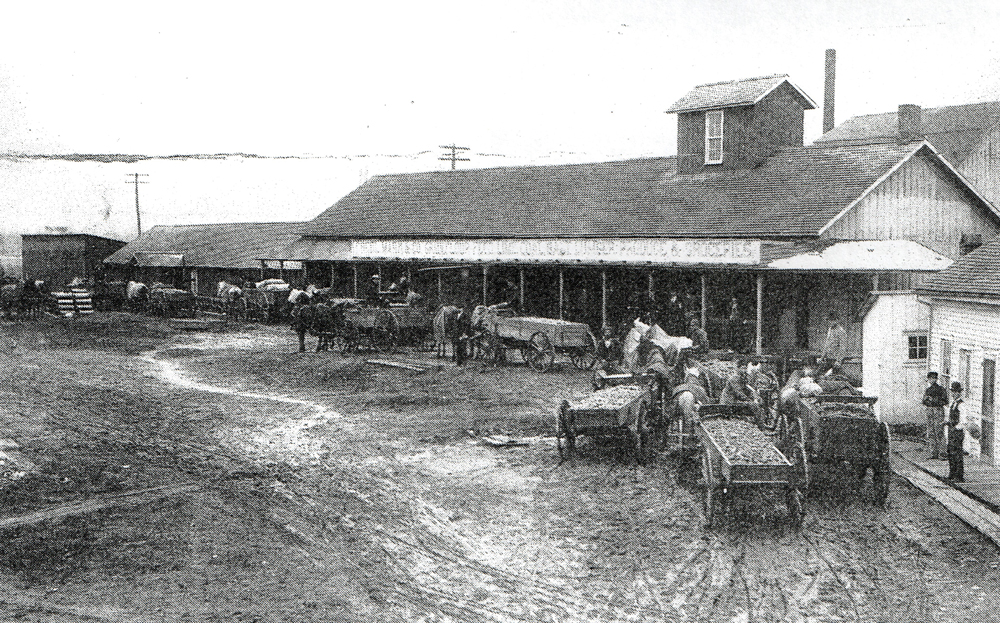 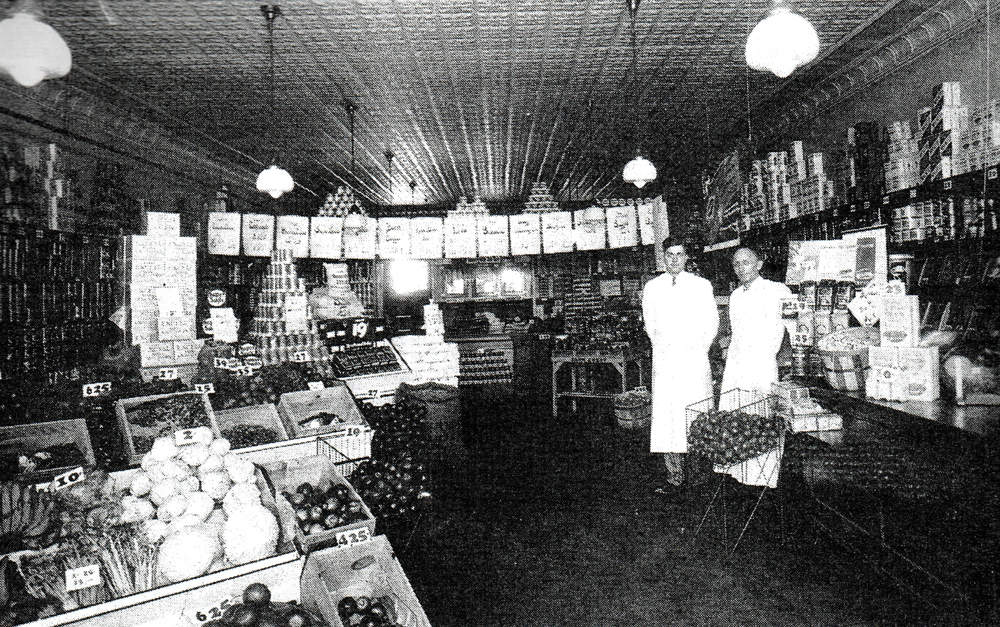 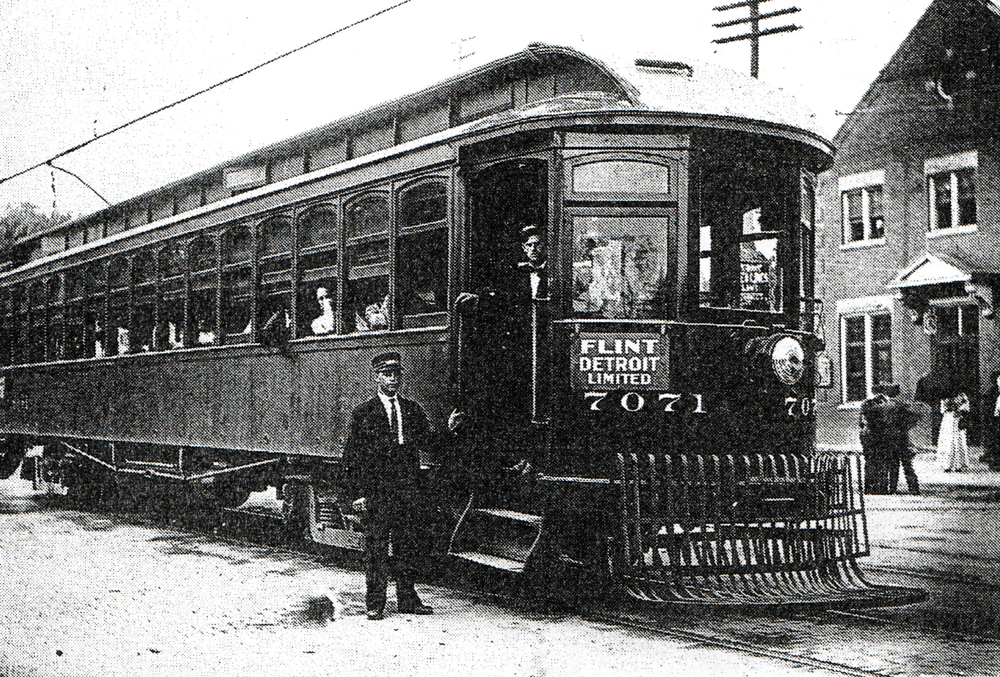 After 1873, Clio and Vienna Township grew in leaps and bounds. The Diamond, Wildcat and County Line schools joined the West Vienna and Bingham schools as early repositories of knowledge. The first school built in Clio proper was the Clio School in 1888.

In 1880, the Vienna Sentinel was published, bringing all of the important news of the day. It was rebranded the Clio Star in 1883 by T. W. Smithson and published until 1907 when it became the Clio Messenger. The Clio State Bank was established in 1885 by William and Charles May; its latest branch would be opened in 1969.

The Clio Fire Department was established in 1881 and was especially helpful in the great Clio fire of 1916 that destroyed an entire block of buildings.

In 1866, the Pine Run Church of Christ was established and the building built in 1869. It currently operates as one of Genesee County’s oldest churches. 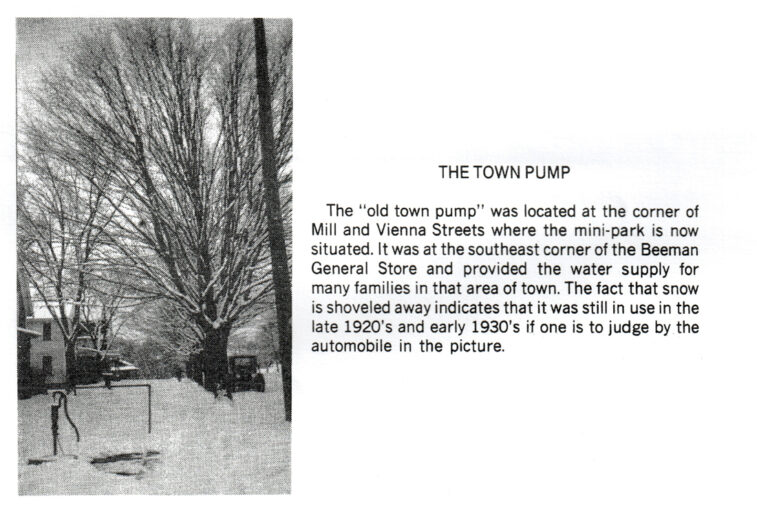 In the early operating days of Pine Run, the lands to the west sat uninhabited until Seymour Ensign finished his home in 1843. As Ensign moved in, he was joined by pioneers George Wilcox and Richard Travis. For two years, the three families were the only inhabitants of the land that would someday be Montrose.

In 1845, John Farquharson traveled to Genesee County from the Montrose area of Scotland. He was a charismatic fellow and became known as the “Governor of Montrose.” In 1847, when the state legislature carved a new township for his land and those around it, naming it Pewonigowink in honor of the Chippewa reservation that consumed its northern border, he was having none of it. Instead he began referring to it as Montrose to all who knew him. It was with this name that he coerced Charles Hartshorn, Amos Woodruff and John McKenzie to join him from Scotland. He petitioned the state for a change in name and it was granted in 1848. Montrose Township continued to receive numerous Scotsmen, including postmaster John Berry, in later years. 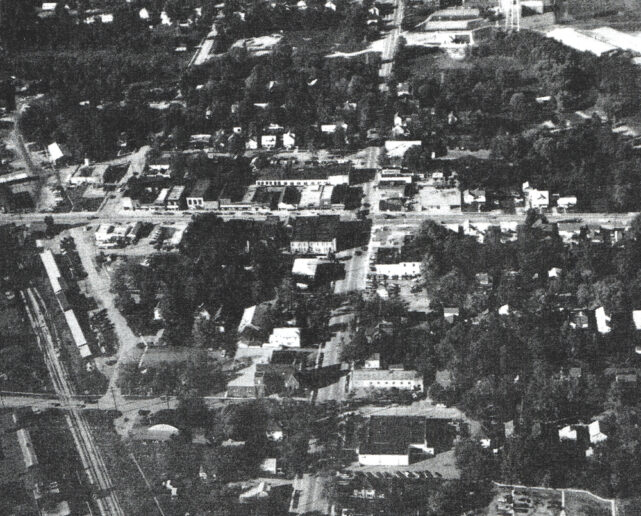 Montrose Township was the last to receive workable roads in Genesee County and due to this, developed quite slowly in industry and population. In 1854, it received its first post office with William Streeter acting as postmaster. The first school meeting was held in the home of George Wilcox in 1845 with plans to make the first school in the summer of that year to be taught by one Mrs. Barnes.

Providing a slight boon for area commerce, the Montrose train depot opened in 1888.

The Montrose United Methodist Church was organized in 1891 under Reverend William Hammond from the neighboring village of Burt in the north. The church was built in 1892.
In 1899, the village of Montrose was incorporated. 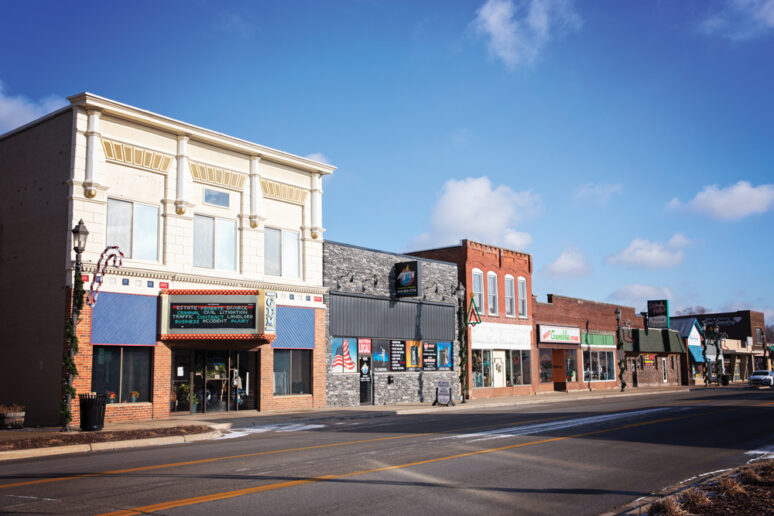 When the 1900s began, industry and population in Vienna and Montrose Townships grew more slowly. After the initial explosion brought by the railroad in 1861, progress in Clio dwindled as automobiles began to dot the land, lessening the need for rail travel. In rural Montrose, progress stalled, advancing only in fits and starts as roads continued to be developed throughout the township.

In the early 1900s, Clio was characterized by a quick burst of population and in 1928, officially incorporated as a city. To deal with the influx of school-age children, an addition was made to the Clio School in 1916 to serve as a high school. In 1928, a new elementary school was completed. The schools would continue in that capacity until a second population boom occurred in the 1950s. In 1953, a new high school was built which would become the current Carter Middle School. In 1956, George Lacure Elementary was built to be quickly followed by Garner in 1960. The current Clio High School opened in 1965 with 1,200 students.

A much-loved Montrose institution, the Montrose Orchard, was founded in 1913 and has been owned by the Hill family since 1925. Decades of families have celebrated fall with a visit to the orchard. 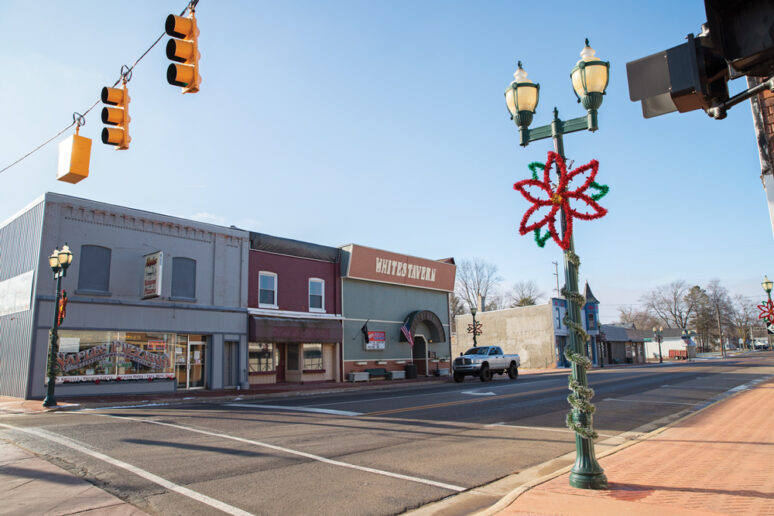 In 1939, the downtown Clio City Park running along the Pine Run tributary was dedicated, providing a piece of nature in the heart of the city. In 1943, the Clio Library opened in the confines of an old barber shop in downtown, off Vienna Rd. Due to space constraints, the library moved multiple times until 1978, when it took ownership of the original Pine Run school and joined the Genesee District Library. The same year as the Clio Library first opened its doors, the Montrose-Jennings library became part of the Genesee Public Library in the town hall. In 1987, the current library was built, entirely funded by the Wyman Jennings family.

Revving engines were heard for the first time at Auto City Speedway in 1955. When it opened, the speedway was nothing more than a dirt track in the middle of a farm field; it has since grown to be a family-favorite venue for professional racing and a multitude of conventions during its decades of operation.

Due to a lack of courses in the northern portion of Genesee County, a few citizens and business owners got together with the goal of appropriating land and funds to build a new golf course. Clio Country Club was completed in 1966 and remains a much-loved part of the township.

Another beloved tradition began in 1972 when a small group of men sought to improve the quality of life in the small community of Montrose. Their work resulted in the Blueberry Festival, one of the county’s most enjoyed events. The festival has made over $100,000 dollars in contributions to the Montrose community. 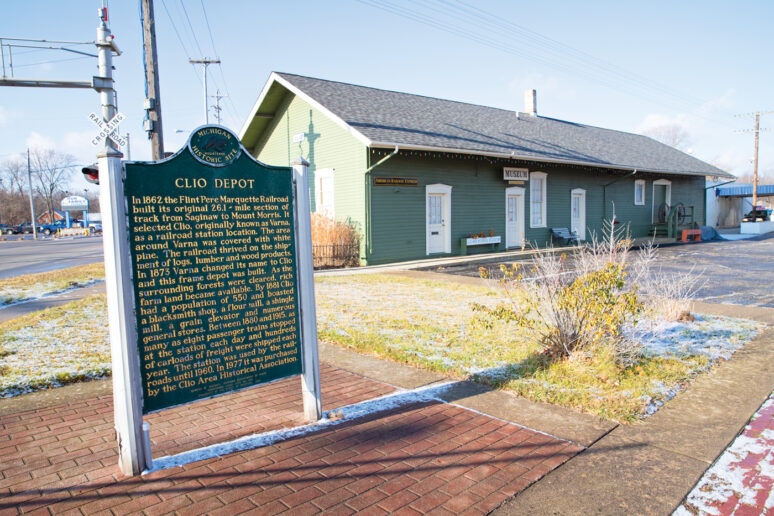 The quality of Clio entertainment increased in the late 70s and 80s when, in 1977, resident Chip Miles sought to create a theatre workshop so that her daughter could be involved with stagecraft. With the help of friends Evie Zilinski and Brenda Clappe, the Clio Players were founded. In 1979, the organization would become Clio Cast & Crew. Starting in 1987, the Clio Amphitheater welcomed the likes of Bill Cosby, Styx, Smokey Robinson, Tom Jones, Journey, Jewel, Billy Idol and others to Downtown Clio to the delight of Greater Flint. Each summer, the amphitheater welcomes a full slate of artists and musicians.

Clio, Montrose and Vienna Townships are the final pieces of the Genesee County puzzle, and we wouldn’t be complete without them. The audacity of their pioneers to step into and forge a life in the northern wilds of Genesee County, coupled with their welcoming natures, is reflected in its citizens today.