This new series profiles the beginning and history of the towns and cities surrounding Flint in Genesee County. The profiles will be presented according to the earliest known settlement year. Major highlights will include founding, notable personage, major events, noted locations and business.

During the 1820s, the United States was beginning to expand into new and vibrant territory within its North American borders. The country was looking inward. Most of the land was unclaimed and unorganized. Spain still held the lands of California through Texas, the Missouri Territory included lands from Missouri to Minnesota and the Dakotas, and the area of Oregon and Washington State was still wild. Much of the unclaimed land was still settled by Native American tribes. Michigan in the 1820s was held as a U.S. territory but a country untamed. Persons from around the world were jumping at the chance to come to the New World and forge a pioneer life for themselves and their families. One such traveler was a man named Jacob Stevens.

In 1822, Jacob Stevens and his family arrived in the Detroit area from New York. He had a claim to land in the area and built a log cabin where he resided for a time. In early spring of 1823, it was found that his claim was faulty. He left his cabin to a family friend and continued north, up the old Saginaw Trail. He found his way to a place known to the local natives as Grumlaw. French traders began calling it Grand Blanc meaning “Great White.” (There is a legend claiming that Grand Blanc was named for a big, Caucasian savage man by the name of Fisher who married a local Native American, began a family and lived near Lake Copneconic. The legend may hold a kernel of truth, however. An 1859 map shows that the original Grand Blanc was the village of the “Chief Fisher” band.) Jacob Stevens staked his own claim on unoccupied land and became the first settler in Grand Blanc.

Soon after the arrival of the Stevens family, the area of Grand Blanc was quickly overrun by new settlers. The first entries for land in what would become Grand Blanc Township were made by George Perry on June 3, 1824 followed by William Thompson, Charles Little and Samuel Perkins on June 17. Jacob Stevens was a kindly man who helped many early pioneers get their start in the area and the Perry family was welcomed into the Stevens home while they hastily worked on their own. In fact, Stevens’ land was never officially titled until made by Simeon Perry, after he married Stevens’ daughter. In 1831, Stevens returned to New York while is eldest son, Rufus, stayed behind to help grow the town. After Jacob Stevens left, the Perry family took up the mantle as patriarchs in the area and became very influential. The Historic Perry-McGrath homestead, located at 5078 Perry Road in Grand Blanc was built by Edmund and Simeon Perry in 1825. Edmund Perry built the first school in 1830 near Thread Creek with a focus of studying arithmetic, and his granddaughter Isabel is claimed to be the first Caucasian child born in Genesee County.

In the late 1820s, another traveler by the name of Alvah Brainerd arrived in Grand Blanc from New York by way of Detroit. While here, he published a book entitled “A Pioneer History of Grand Blanc” full of stories detailing his time spent making a life there. Other notable Grand Blanc settlers from the time period are Jonathan Dayton, Rowland Perry, John Tupper, Caleb Embury, Silas D. Halsey and Joseph McFarlen.

The original Grand Blanc High School was constructed in 1921 and is now the Perry Innovation Center.

As the area began to fill, the Grand Blanc families gathered at the home of Rufus Stevens to officially organize the Township of Grand Blanc in 1833 (and to decide upon the official spelling of “Grand Blanc”). At the time of organization, the township included the future townships of Atlas, Burton, Davison, Fenton, Flint, Genesee, Mt. Morris and Mundy. As other Genesee County townships began to form, Grand Blanc township shrunk to the size that it is today.

The area and land remained attractive. In early 1833, the first physician arrived – Cyrus Baldwin – and soon thereafter came the second, John W. King. Later that year, a businessman by the name of Charles De Witt Gibson came to town. After settling, Gibson opened a sawmill and a general store in the area around Saginaw and Dort Hwy. The area grew to be very lucrative and other businesses quickly sprang up. The area was known then as “Gibsonville” named after its most known citizen. The name changed over the years and the area came to be more commonly known as “Whigville” after Gibson’s staunch support of the Whig Party. While Whigville was becoming established, the rest of Grand Blanc was also making strides. In 1834, a wagonmaker, Mr. Nobles, and a blacksmith, Mr. Shaw, collaborated to produce Genesee County’s first wagon. In 1835, Stage and Wright opened the first store.

In 1837, Michigan officially became a State and Grand Blanc was in consideration as a place for the State Capitol due to its occupancy, commerce and land. It lost out on what could have been a history-changing award and instead the Capitol was placed in the settlement to the west, Lansing. In 1840, the first stagecoach stop was introduced, increasing trade in the area and in order to better capitalize on the traffic, Mr. Gibson opened the Gibson Hotel, the area’s most popular rest stop, in 1848.

In 1864, the citizens of the area were presented with a golden opportunity. The Pere Marquette Railroad was looking to expand and the lands of Grand Blanc were chosen to carry the tracks south. Prominent Township figureheads met to decide if they wanted to bring the railroad through. Charles De Witt Gibson dissented to allow the track through Whigville, while the rest of the families (most notably the Davison family) voted to allow it through lands in the center of Grand Blanc. Tracks were run through the heart of town and Grand Blanc prospered. This led to the decline of the once prosperous Whigville, and it returned to hamlet status in 1877. In 1884, Grand Blanc was the site of the annual Convention of the Women’s Christian Temperance Union. (It was at this time that many Grand Blanc men went into hiding or suddenly had something important to tend to elsewhere.)

As the years passed, Grand Blanc became far more organized. School districts popped up toward the end of the 1800s, numbering ten in total. In 1903, the State of Michigan passed a law allowing townships to consolidate school districts and mandate busing. Grand Blanc became the first community to consolidate its schools to three classrooms holding approximately 115 students throughout ten grades. Horse-drawn carriages took children to school until the purchase of a model T in 1920. In 1921, the Grand Blanc Township Unit School was built on Saginaw and Perry roads. It contained 15 classrooms, a gymnasium and was considered state-of-the-art. The school began with 350 students and the first graduating class consisted of three individuals: Berneda Taylor, Ethel Tyler and Ernest Somers. The building is now the Perry Innovation Center.

At Lincoln Airport in Grand Blanc, Lincoln Oil owner, William Malloska was putting on a show in honor of aviatrix, Mildred Doran. Doran had aspirations of being the first woman to fly across the Pacific and was leaving for California to take part in a high-stakes air race to Hawaii. She would be a passenger in a plane sponsored by Malloska. She left to much fanfare from Lincoln Airport. Tragically, while taking part in the race, her plane was lost and the crash site was never found. Malloska honored Doran with a large tower placed on his property. In 1932, Lincoln Airport was sold to a developer and became the Lincoln Manor Subdivision. The tower erected for Doran was removed in 1973.

It was in 1930 when Grand Blanc was officially incorporated as a city and also when Grand Blanc School adopted their colors of black and red. They were known at the time as the Grand Blanc “Big Reds.” In 1936, the crowds turned out for the first homecoming football game when the Big Reds took on Fenton. Grand Blanc won the game 18-7. As the community continued to grow, new schools were built. McGrath Elementary opened in 1954, and Myers and Brendel in 1957. Finally, in 1963, the current high school was opened at Saginaw and Holly Roads. Indian Hill, Reid Road, Anderson and Cook schools rounded out the district. In 1955, Holy Family Catholic School was constructed on the grounds of Holy Family Catholic Church. 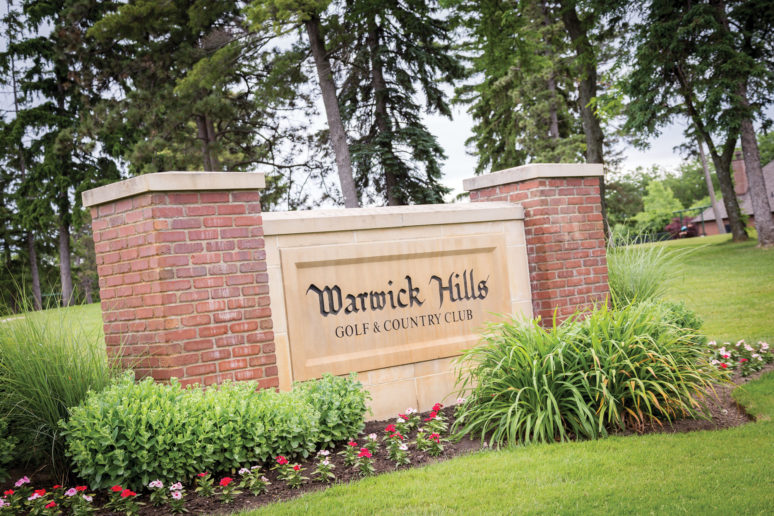 During the 1950s, the Flint Golf Club was over capacity and wanted to expand to another private golf course in the area. Six gentlemen got together and laid the groundwork for the construction of the Warwick Hills Golf Course with the help of a prominent GM executive, Waldo McKnight. In 1957, the first holes were played at the course and as soon as 1958, the inaugural Buick Open was held. The first winner was Billy Casper. The course was in rough shape for the first couple of Opens until it was rebuilt in 1968, only to have the tournament cancelled the next year. It wouldn’t be long until the Buick Open began again in 1978.

Another Genesee County organization began in 1996 with the opening of Genesys Hospital.

Grand Blanc was the first of many settlements in Genesee County that became integral to our area’s character and success. It has become an extremely prosperous and well-loved part of Genesee County and will continue to be so well into the future.