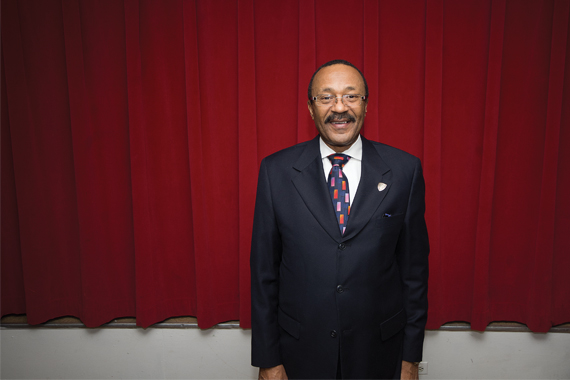 “The Spirit of Humility prevails as we look back over our years of vast achievements since our inception in 1876.”

Gerald Cardwell is the new pastor of an old church, the oldest African-American congregation in Genesee County, to be precise. Since September, Pastor Cardwell has been leading his flock at Quinn Chapel AME Church. To understand the history of Quinn Chapel, one must first examine the history of the AME – African Methodist Episcopal – Church, says Pastor Cardwell. That story begins with a former slave from Delaware named Richard Allen.

Richard Allen, founder of the AME Church, was born a slave in Philadelphia in 1760. Forced to swallow the “bitter pill” of bondage – including being sold and separated from his family at a young age – Allen heard a Methodist sermon near his master’s Delaware home when he was a teenager, and was born again. A cursory knowledge of Christian sects will make clear why Allen was drawn to Methodism. Founded by former Anglican John Wesley, Methodism taught that God was not a distant and angry figure but a healing friend, and that everyone was equal and loved in his eyes. Unequivocally, Methodism took the stance that slavery was a sin. It is important to note here that Allen’s conversion to Christianity is what inspired him to pursue the difficult path to freedom. In 1780, Allen convinced his master to draw up a manumission agreement. In order to buy himself, he needed to raise $2,000 on his own, working at odd jobs after he finished laboring for his master from sunup to sundown. With a resolve that seems almost feverish, Allen raised the funds in only three years. In 1783, he breathed the air as a free man.

Immediately after manumission, Allen began preaching in gospel circuits in Delaware, Maryland and Pennsylvania. He formed a close friendship with Francis Asbury, another famous Methodist preacher who would support him throughout his life. In 1786, Allen was considering a move to Philadelphia, which was becoming a safe haven for free blacks around this time, when he was invited to preach at St. George’s Methodist Church, located in the heart of the City of Brotherly Love. When he first began preaching at St. George’s, the congregation consisted of a tiny minority of blacks: five in total. Within a year, Allen’s preaching increased that number to 42 blacks and a much larger white attendance. Allen dreamed of creating an all-black church, but he received vehement disapproval from his white associates and skepticism from his black peers.

Undaunted, Richard formed the Free African Society (FAS) in 1787, a secular group that went beyond spiritual matters and addressed the moral, financial, and educational needs of blacks in the city. Allen still dreamed of the founding an all-black church, and sometime in the early 1790s, the time was ripe for such a movement. While the details cannot be pinpointed exactly, increasing racism at St. George’s was the underlying cause behind the black congregation’s exodus and subsequent creation of a church all their own.

In 1794, Allen converted a blacksmith’s shop into a church: the African Methodist Episcopal church. The name is very significant. Richard Newman, author of Freedom’s Prophet: Bishop Richard Allen, the AME Church, and the Black Founding Fathers, says that the word African shows the black community’s intense desire to “link their collective uplift to a glorious African past.” Methodist obviously links to Richard Allen’s deep belief in the abiding principles of that doctrine, despite his treatment at St. George’s, while Episcopal shows the tension in the black community. Many blacks were so enraged by their treatment at St. George’s that they wished to leave the Methodist faith altogether; Episcopal served as a compromise. The first all-black church in America, named Bethel AME, meaning, “house of God,” was dedicated on July 29, and white dignitaries, including Allen’s friend bishop Francis Asbury, were in attendance.

In 1815, elders from St. George’s who were threatened by Bethel’s exploding numbers schemed to put the church up for auction, hoping to subject the black congregation to their will by selling their church from under them. Allen bought his own church back for a sum of $10,125, which Newman calls “a princely sum in 1815, a fortune for people of any class or color. Allen used the money to buy back perhaps the most important free black institution in all of America.” In 1816, Bethel won a court ruling that it could exist as an independent church. By this time, Allen had had enough. He called a convention of African Methodist Episcopal members from across the nation, and the AME Church was brought into being as a denomination, with Allen named bishop.

As the years passed, Richard Allen did not confine himself to merely growing his church’s membership. He intentionally reached out to all members of his community, black and white, and Newman says that “by consistently reaching beyond the black community, Allen helped redefine the meaning of early black leadership.” He continued to minister to blacks and oppose slavery up to his death in 1831.

The AME Church’s move to the far west, as Michigan was then known, coincided with the movement of blacks to that area in their search for respite from the crushing slavery of the South and the racism of the North, despite its anti-slavery stance. It was the Underground Railroad that allowed many slaves who were seeking their freedom to get to Michigan. “Because of the Underground Railroad, many blacks found their way across the Ohio River,” says Pastor Cardwell of the church’s spread to the Flint area. “The former slaves made their way to Indiana, Michigan and Illinois.” Many chose to settle in Western and Central Michigan. “They didn’t want to risk settling in Detroit because of the slave catchers, so they hid in the woods in Michigan,” Cardwell says.

Quinn Chapel AME Church in Flint started out in the home of Mrs. Nancy West, at the corner of Stevens Street and the Grand Trunk Railroad in 1875. It was the first organized black church in the city of Flint. The chapel was named in memory of Paul Quinn, the fourth bishop of the AME Church. The first church structure was erected at 121 E. 7th Street in 1876 and dedicated in 1877 under the pastorate of Rev. John Ferguson. A debate society organized by local young men paid the debt on the first church building with fees earned from Friday night debates. The church’s second structure was erected in 1912 with the annex being completed in 1933 under the pastorate of Rev. G. W. Baber. Continued growth necessitated an even larger building, and construction of the current structure off Lippincott Boulevard began in 1955 by Rev. James S. A. Mitcham. In June of 1958, the brick masons began work on the superstructure, and the cornerstone was laid July 20, 1958 by the Most Worshipful Master of the Prince Hall, Grand Lodge Free and Accepted Masons. Services were held for the first time in the superstructure on December 25, 1960.

Pastor Cardwell is Quinn Chapel’s 15th pastor, and serves a congregation of over 200 people. “It is my duty to gladly accept this charge as pastor at Quinn Chapel,” he smiled. “We are committed to our community by feeding the hungry, clothing the naked and setting the captive free.” The congregation at one time was over 500 people, but members have grown in age and maturity, says the pastor. Many of their children have grown and left the community for careers, but they stay connected, he added. “Our doors are open to anyone,” he said, welcoming the people of Flint into the house of the Lord.

According to its written purpose: “Quinn Chapel is a loving, caring, Spirit-filled Christian congregation committed to the African Methodist Episcopal Church’s mission of serving God and His people by assisting them to become all that God created them to be.” Pastor Cardwell is committed to that purpose. The church has plans to resurrect the Debate Society and to honor the young men of the Debate Society who helped pay the chapel’s debt many years ago. “We are going to have local high school students come and learn debate techniques to help them better resolve conflict,” says the pastor. He also looks forward to intertwining the rich history of Flint’s oldest black congregation with its future. As a final thought Pastor Cardwell says, “Only what we do for Christ will last.”

See more photos HERE, or purchase photos from this story by going HERE and selecting the “Quinn Chapel” category.