At Beecher High School, Ja’Kobe Derricks was a fleet-footed, sure-handed defensive back who gave opposing offenses nightmares. His gridiron skills made Derricks an All-Stater. His feet carried him to a 100-meter dash state championship, running a time (10.78 seconds) bettered by only five others in Genesee County history. Nearly three years after last suiting up for the Buccaneers, Derricks found himself longing to again experience the full-contact competition and camaraderie football offers.

The Flint Fury semipro team, which has been providing such an outlet for those like Derricks for almost two decades, was the perfect solution. He is one of roughly 50 players from 17 to 41 years of age who love taking brief respites from jobs and other responsibilities of life to don helmets and pads and test themselves against opposing Midwest Elite Football Alliance squads.

“From the time I was first introduced to the team, I could tell how good of an atmosphere being part of the Fury allows you to be in,” Derricks says. “We have a great mix of players – younger guys like myself and older guys who have been with the team a while both charging each other up. It’s a great family-type atmosphere.” 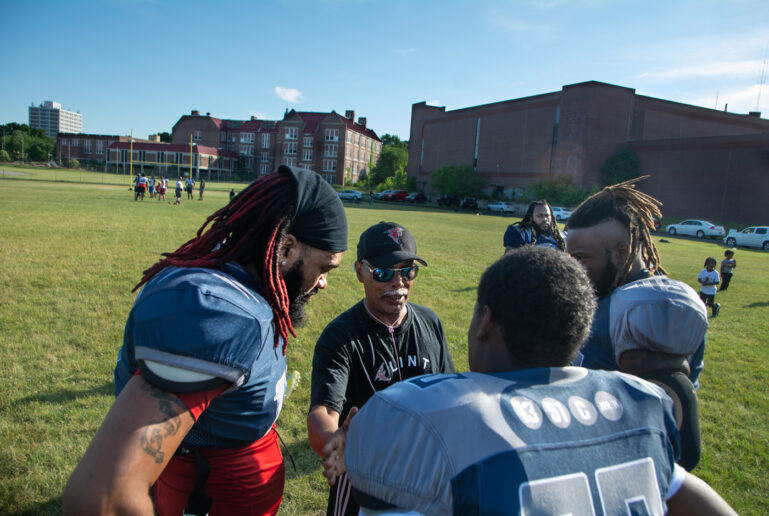 “We are going to surprise people with what we do this season and put the Fury back on the map.”
Charles Lawler, Owner/Head Coach

Like many of his teammates, Derricks discovered that being part of Fury has done more than scratch his football itch. The 20-year-old is also bettering his life.

“I am trying to make positive changes and joining the Fury has given me a place to channel any anger and frustrations I have,” Derricks says. “It provides me with an escape, kind of a happy place. The whole team is a great support system for each other and we want to open people’s eyes to see what a positive thing this is for guys who are open to making changes in their lives.”

That’s Fury Head Coach and Owner Charles Lawler’s main motivation for remaining passionately involved with the organization he joined in 2003 as a player before becoming coach in 2008. The 51-year-old takes great pride in being the team’s life coach, as well as its football coach.

“To be real with you, I see the despair that is part of Flint – like poverty, crime and the (ongoing) water crisis – and I really want to help the younger generation, especially, find their way through all of it,” Lawler says. “My goal is to help them not get caught up in the turmoil.” 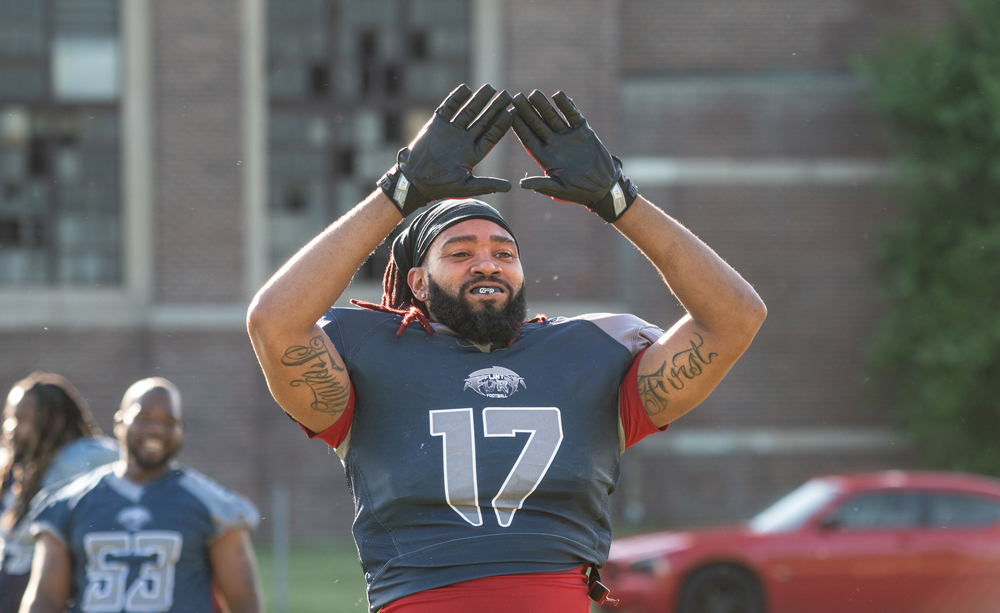 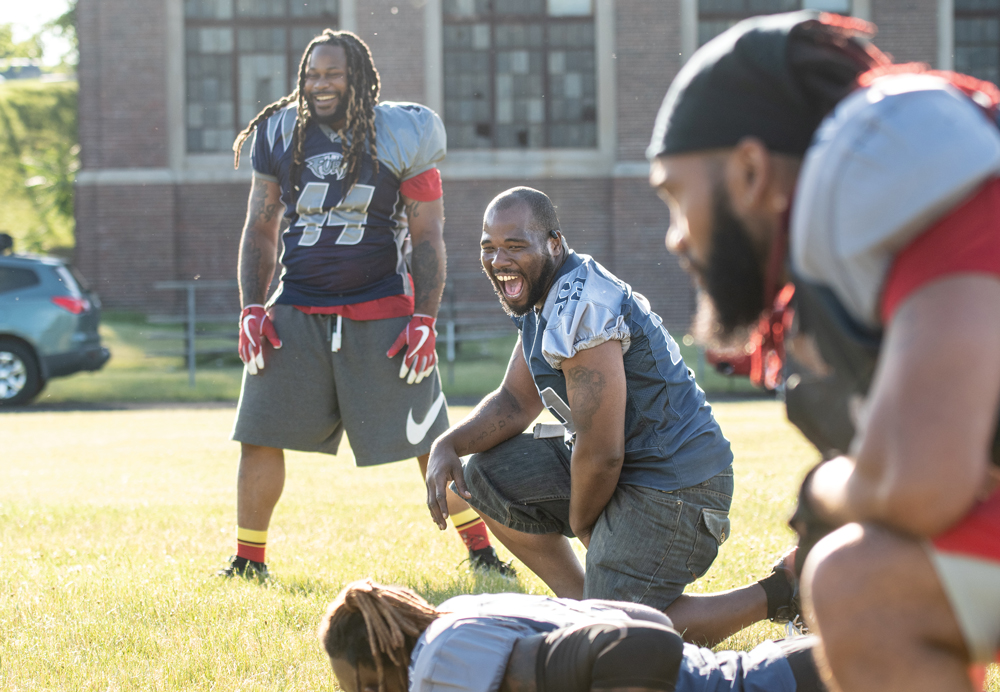 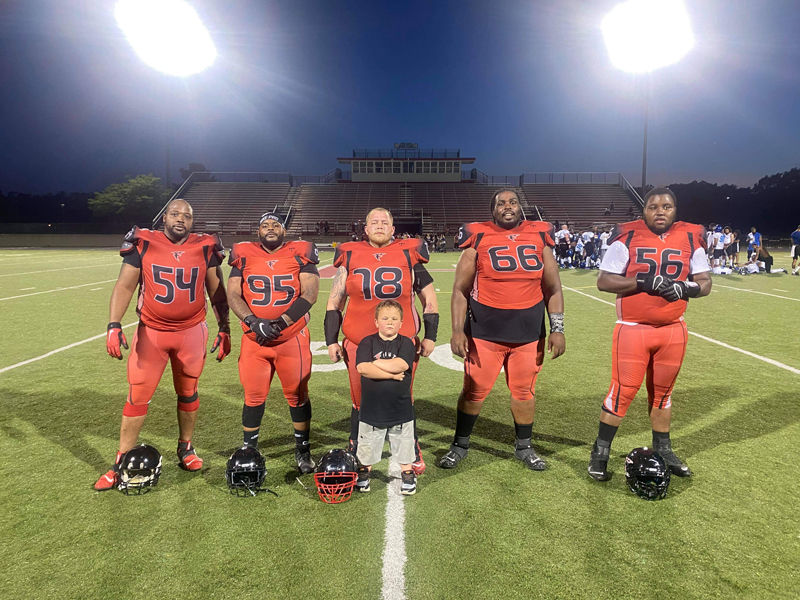 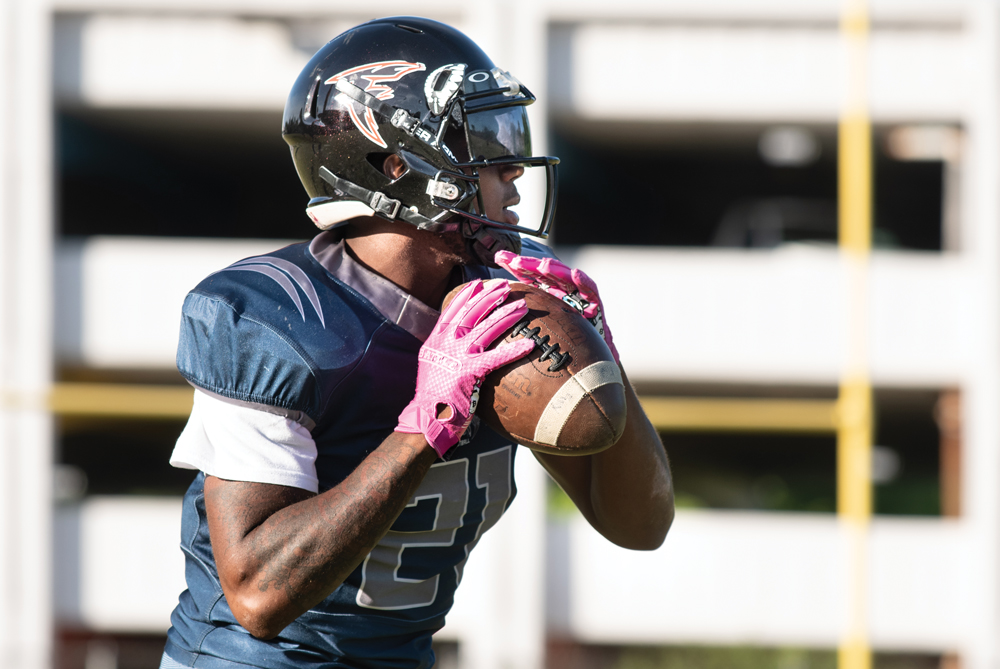 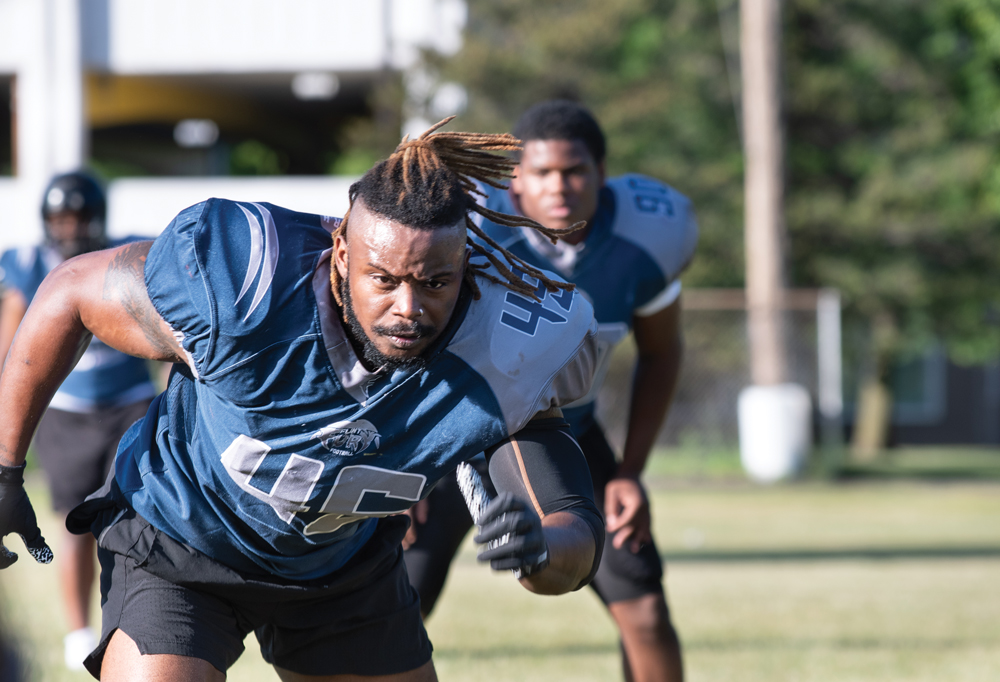 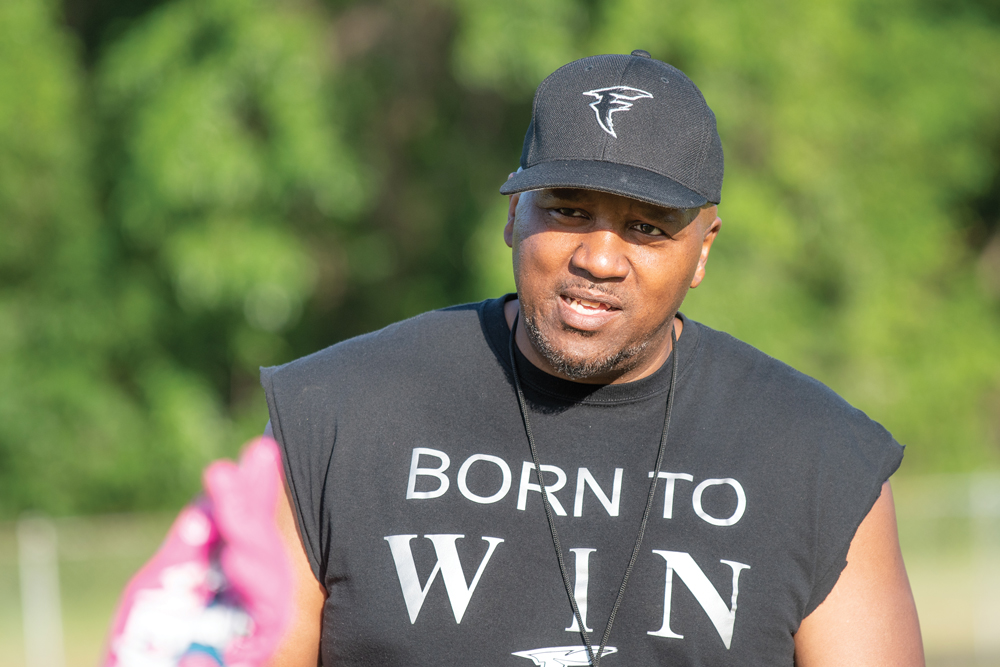 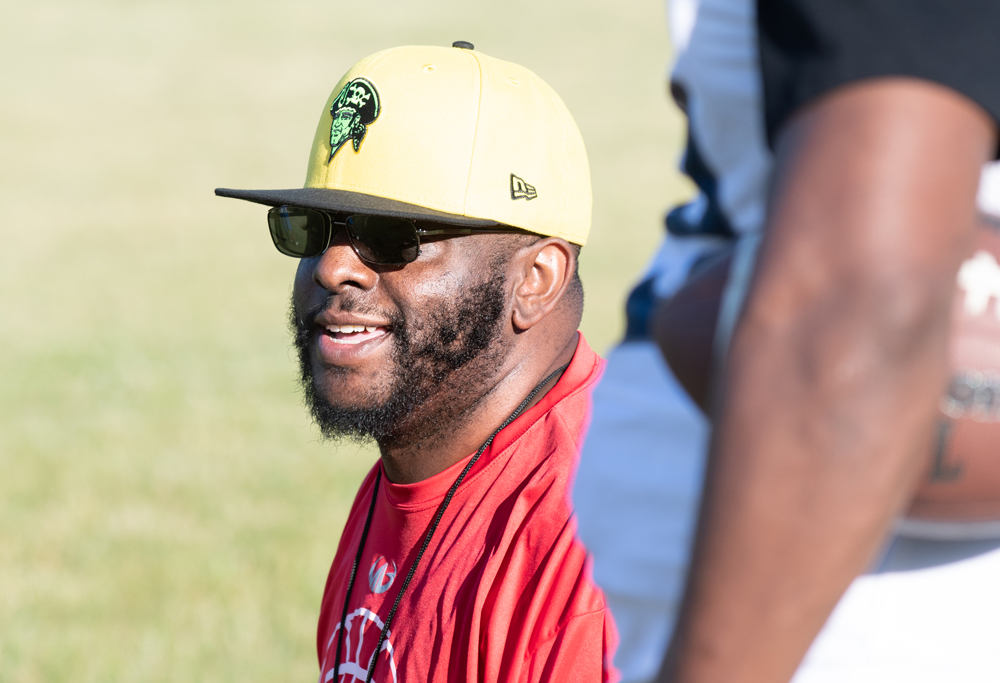 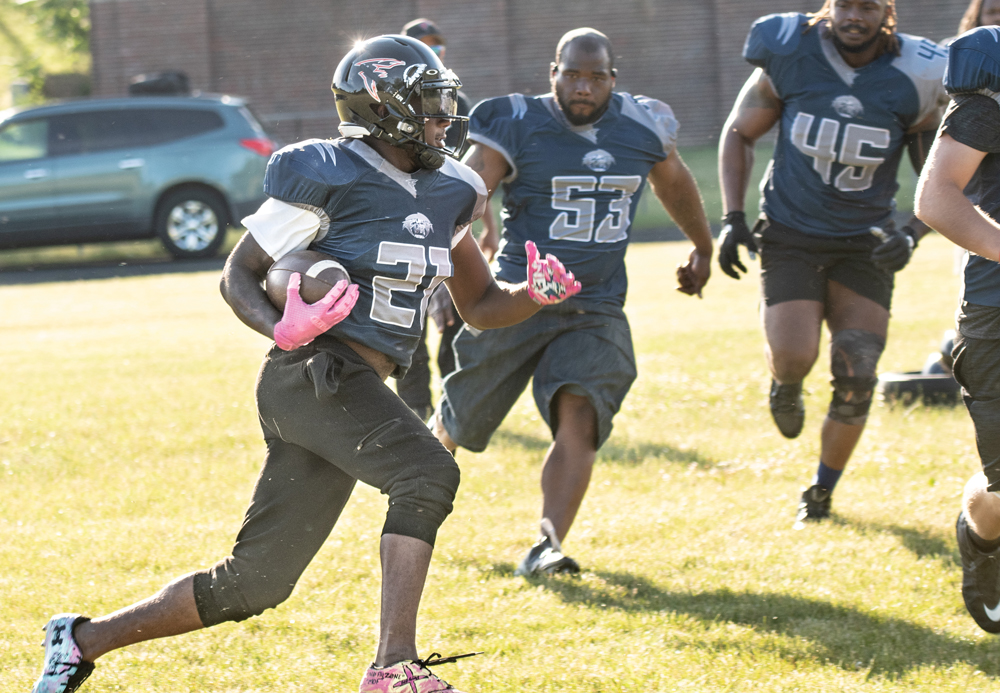 Among other things, Lawler organizes a financial workshop for the younger players every season. “Some players do not even have a bank account which, of course, makes it difficult to establish credit and move forward in life,” he says. “I try to help them understand important, basic things about managing money, like how to use credit cards responsibly, to get their financial footing.”

Lawler also emphasizes the importance of players and the coaching staff utilizing their various backgrounds, occupations and strengths to help take care of each other.

“We really promote the community aspect of the Fury because we have all types of players who hold different jobs and that can be used to help their teammates in need,” he says. “For example, if somebody on the team needs their car looked at, we have a mechanic. We also have somebody who sells cars.”

The Fury’s website, Facebook and Instagram accounts are also filled with photographs and videos spotlighting individual players. “I do that because I want the players to get a little exposure, their 15 minutes of fame,” Lawler says.

Lawler estimates his commitment to the Fury consumes about 25 hours of his time each week during the season. He juggles that with his full-time job as a first-shift transporter at Hurley Medical Center. “It can be challenging, but working first-shift makes it easier to organize practices and other activities,” he says. “Working only one weekend a month also helps. I’ve learned the best ways to make everything happen as far as work, home life and the team.” 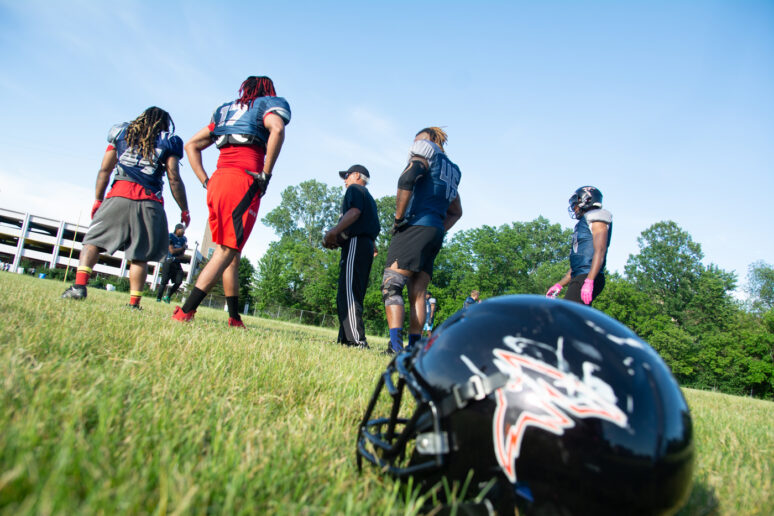 The Fury’s promising start this season has certainly made all of Lawler’s efforts feel worthwhile. The team, 4-4 last year, took a 2-1 record into their June 19 game against Tri-City Stampede.

“The season has been great so far because we’ve improved with every game which is a really good sign,” Lawler says. “The running game has been solid, but our offense overall needs a little work. The defense has been great, maybe the best it has looked since 2012, especially the defensive line.”

Derricks, who is playing safety, finished with five tackles and was barely touched in returning an interception for a touchdown in a 12-6 road win over the Muskegon Mustangs on June 5.

“We’ve improved a lot since we first came together in the spring,” he says. “We are going to surprise people with what we do this season and put the Fury back on the map.”

Lawler has even labeled this season “The Great Reset,” switching the team’s colors from navy, silver and white to red, black and white.

A two-quarterback offense is also new, consisting of Cortez Effinger and Craig Halmon. Effinger played for Flint Central and UM-Flint’s club team while Craig Halmon is one of three Muskegon natives on the roster. At 5-feet-11 and 270 pounds, he is an imposing presence in the pocket.

Marcel Lang, a 17-year-old receiver from Muskegon, is the youngest player. Hamady graduate Andrew Clark, 41, is the oldest. The father of three and grandfather of one is in his 20th season with the team.

They gather for practice for about three hours on Tuesday and Thursday evenings at now-shuttered Flint Central. “We rarely cut anybody,” Lawler says. “Guys tend to weed themselves out. It’s usually not possible for all 50 players to make every game because of other things going on in their lives, but this is one of our better years for depth of talent.” 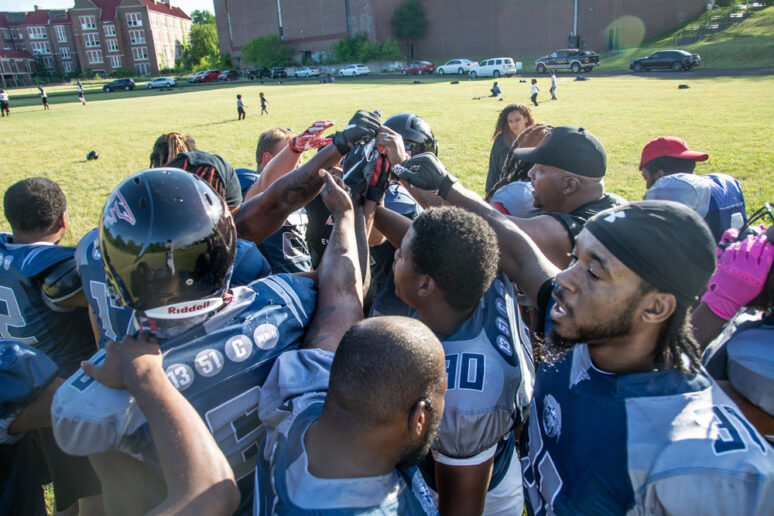 In addition to providing a tackle football outlet for adults and assisting them in improving their lives, a third aspect of the Fury’s mission is giving back to the community. Fury players have spent time visiting the Marion D. Crouse Instructional Center for special needs children in Flushing and the Boys and Girls Clubs of Flint. Some have also read to elementary school children. Patton and Bransford run the Genesee County Wolfpack, a youth football program.

Lawler did not play football while attending Flint Northern, but joined a flag football team soon after graduating in 1988. That led to him join a semipro team in Lansing before beginning a lengthy stint with the Flint Falcons. He jumped to the Fury after the Falcons folded. Lawler also was part of the Flint Flames and Flint Phantoms indoor football teams which existed briefly during the first decade of the century.

The Fury play home games at Hamady High School. They host the Motor City Hawks on July 17 and the Southern Michigan Red Storm July 31. Both games kick off at 7pm. Playoffs begin August 7 should the Fury qualify.

“Based on our start, things are looking good to have our first winning season since 2015 and make a playoff push,” Lawler says. “There is a lot of excitement surrounding the team because new guys have come in eager to start playing and make their mark which has, in turn, fired up the older players.”

Photos by Tim Jagielo and provided by Flint Fury