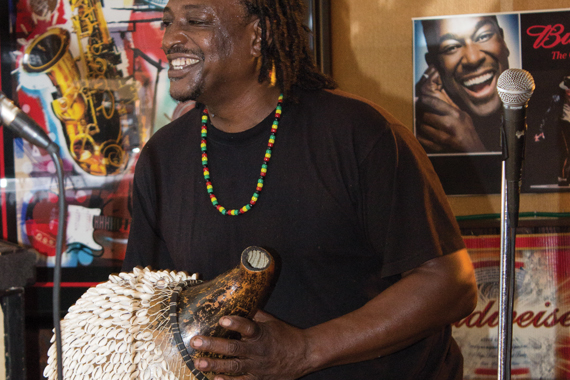 Recently, many 1920s American customs, manners, and styles of dress have experienced a comeback. Credit for this revival has spanned the cultural spectrum to include the American hipster (a term that actually stems from the 1920s) to the English chap, all the way to the recent rendering of F. Scott Fitzgerald’s The Great Gatsby on film. However the flamboyance of the flapper generation has been revived, there are but a few vestiges from the era remaining in Flint; the principal survivor is the Golden Leaf Club on Harrison Street.

In 1921, Golden Leaf became the happening spot for Flint’s black community at a time when citizens were marginalized by government-backed segregation. The IMA arena of old brought in national talent of all ethnic backgrounds, but black performers were made to exit via the back door. Blacks in the city were not permitted to watch black talent alongside whites, who were purported to have access to shows from 8pm until midnight, followed by residential blacks who would then watch the same show from 1am to 4am – if any entertainer cared to perform so late. Golden Leaf Club provided an alternative for blacks in this situation. It was a membership club that gave blacks not only access to entertainment at a reasonable hour, but exclusive access to talent that came to town with aspirations to perform at Golden Leaf instead of IMA. The appeal in the black community was so great that men of renown sought out Golden Leaf Club, including Junior Walker, Sam Cooke, and a young Malcolm Little, later known as Malcolm X.

Golden Leaf is still a members-only club, but all guests are welcome, which is evident in the gradual and continual cultural integration that has taken place there, especially over the last 30 years. Members pay dues and grant membership to those they approve, and the tradition of Wednesday Night jazz and blues continues, all at the original venue. The building shows the wear and tear from years of standing at attention, but aside from some minor adjustment to the interior, she is almost structurally unchanged.

Lottie Reid of Flint was a longtime patron and member of Golden Leaf when she took over management duties in 1992. Reid worked for 30 years in the ever-changing telephone customer service business known as AT&T. When time came to manage Golden Leaf, Reid reckoned it a new career with a familiar responsibility. She says she has “always been a people person,” comparing the act of customer service in the phone industry to serving the members of Golden Leaf. She jovially claims that she likes the people who come to Golden Leaf and enjoys being a part of the community. “It’s just prestige,” she says. “This is a part of history.”

Indeed, Golden Leaf Club is a part of history, as one of the less estimable parts of history stares the club in the face daily. Across the street from Golden Leaf stands what once was Clark School. The building has gone through a handful of owners over the years, and stands empty to this day, but long ago, its grounds and surrounding neighborhood welcomed a large, predominantly black population that teemed with black businesses. Golden Leaf was the rule of her day, not the exception; but in time, all of this would fade away, obstructed by failed policies and the construction of I-475. The neighborhood that once was is no more, and Golden Leaf Club stands alone on her block in an undeserving specious state.

Thankfully, we’re not permitted to eulogize the living, so we’re not talking about the former club, but the club that lives on to this day. This is the club that one mature patron on hand during Reid’s interview with My City Magazine remembers sneaking into when she was young. In speaking to the mature, Reid says that Golden Leaf has a “mature” crowd – in fact, she claims that Golden Leaf tries “to stay mature.” This is the mark of a club of class, and Golden Leaf is just that. For all of those lovers of retro and classical, you will be hard pressed to find something more classic in Flint than Golden Leaf. Here’s your chance to put your tweed jacket to good use. Just make sure you or somebody you know is on the list before you show.

Are you interested in purchasing photos from this story? Go HERE and select the “Golden Leaf Club” category.