Honorable David Newblatt, Genesee County 7th District Court Family Division, presides over the Girls Court – a specialized prevention docket designed to meet the needs of adolescent girls who are under the Family Division’s jurisdiction. Judge Newblatt wanted to find a way to help the at-risk girls whose cases were on his docket, and after about a year of planning by a team of people, Girls Court was implemented in January 2015. According to the judge, there was only a handful of Girls Courts in the country, but there wasn’t one in Michigan. Genesee County was the first to implement it and now, Kent County is starting one.

“The primary purpose of the Girls Court is to reduce the risk of girls age 14-17 from being trafficked,” Judge Newblatt explains. Human trafficking is a big issue everywhere, and Genesee County has its own unique set of problems, he says, adding that over 40 percent of children in the City of Flint live in poverty. “Poverty and dysfunction create a lot of issues for kids.”

“The victimization of young women in our culture has
become a social issue that we, as a society, need to address.
We are happy to partner with Girls Court, if we can help just
one girl from becoming a victim and stop the exploitation of
girls in our community, our involvement is a success.”

Judge Newblatt remembers working on a case a few years back when he was a prosecutor – the murder of a 19-year-old woman who was a prostitute. Her pimp had tracked her down, stabbed her 26 times and slit her throat. “He was just going to beat her up but she pulled a knife on him and he killed her,” says the judge. What he remembers in particular about the case was the attitude of police. “Because it was a murder case, it had to be prosecuted,” Newblatt stated. “Killing her was off limits. The pimp crossed the line.”

This is why the Girls Court is important to Newblatt. “Pimps don’t go looking for well-adjusted girls to traffic,” he says. “They look for girls who don’t have solid families.” And trauma in the lives of the young girls is the biggest risk factor in human trafficking, he reports, which is something that is evaluated in Girls Court. “Victims of trauma are really vulnerable.” 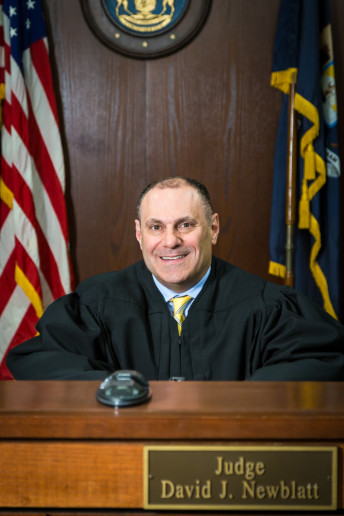 Newblatt’s interest in the matter grew when Laurie Johnson, a law clerk and former nurse, began working for him. “She was passionate about human trafficking,” he remembers, and he became more aware and educated on the issue. “I didn’t think I had seen any human trafficking cases on my docket, but I hadn’t known what to look for. That’s when the bells went off!” he exclaims. “It was hiding in plain sight in my delinquency docket.” His thoughts went back to the murder of the prostitute from years ago. “When I saw her case, she had lived to be 19 years old. What I didn’t see was what previously happened in her life. She probably suffered multiple traumas as a child and started acting out with risky behavior, which is really a form of coping.” Behaviors that are considered to cause trauma include substance abuse, running away, truancy and domestic violence, to name a few.

Girls are referred to the Girls Court after appearing on the Family Court docket. “The reason they are here is because they are deemed to be at risk, regardless of what the charge is,” the judge says, adding that every Girls Court case is different. “Each one is a different puzzle to solve,” he explains. “What I care about is making sure the girls are safe, and provided with structure and treatment, if necessary.”

But the real magic happens outside the courtroom, Newblatt says. The girls receive therapy (i.e. substance abuse, mental health, etc.) and therapists also work with the families. “We try to solve issues with family dynamics, as well.” And there is a team of people who work on different aspects of each case. The program coordinator is MSW Erin Werth, a contracted court employee. “She is a super star,” Newblatt reports. Also dedicated to the Girls Court are a probation officer and an education advocate. “Easter Seals Michigan provides us with a therapist. We have therapy specially designed for the program.” And every case is subject to a monthly review, he adds.

Judge Newblatt has been recognized on more than one occasion for his work with Girls Court. In 2015, he received the Patrick Hill Burnett Presidents Award and was honored with the Philip A. Hart Award at the Michigan Women’s Hall of Fame Awards dinner.

So far, Judge Newblatt believes that society has done a good job raising awareness and educating people on the serious issue of human trafficking. “The focus of Girls Court is prevention and rescue,” the judge says. “That’s what I’m concentrating on.” While the Girls Court has seen cases of tremendous success, there is now a joint effort of several organizations underway to establish a countywide protocol for human trafficking victims. “Girls Court is just one piece of it,” Newblatt says.
Girls Court provides gender-specific and trauma-focused treatment, judicial monitoring, community supervision, and mentoring opportunities. Its primary purpose is to prevent the exploitation of children, and address victimization, health, education and overall well-being. Corroborating partners include: Genesee Health System, YWCA of Greater Flint, University of Michigan-Flint, Genesee County Human Trafficking Task Force, Michigan Department of Health and Human Services, and Wedgwood Christian Services.
Source: Hagerman Foundation.org