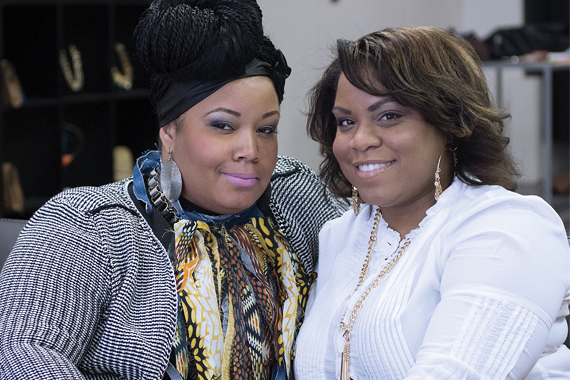 The trendiest new store Downtown is owned by two sisters following their dream: Me’Juana and Marquitta Harris are using their love of fashion to uplift their community and make Flint FAIMous.

The story of how the two sisters came to open their Downtown boutique is one of chance and faith. It began several years ago when they were working on the line – literally sweating day after day. “It was just awful,” Marquitta remembered. “One day we looked at each other and said, ‘We can’t do this anymore.’” As they dreamed about working in their dream field of fashion, they also talked about making a positive impact in their community. During this discussion, the sisters came up with a name that would serve as an impetus for their business: F.A.I.M. “As we were standing there talking about fame and all the negative connotations associated with famous people nowadays, we thought it would be wonderful to have a positive definition and a different set of people to personify the word,” Mia recalled. “We started shouting out the acronym, one word after another, and there it was: For, All, Individuals, Moving, UP!”

While dreams of F.A.I.M. were certainly cherished by both sisters, financial circumstances led Mia to apply for jobs far removed from her native Flint. “I received a job offer from a firm in Texas, which I accepted,” Mia recalled, “and it was probably two weeks prior to my moving date when I finally got a hold of Marquitta. Ever since she had heard that I was moving away, she would not speak to me.” When they talked, Marquitta, who is not usually the emotional sister, cried, “Mia, if we don’t follow our dream now, we’ll never do it! There’s always another job. Let’s give F.A.I.M. a try.” To this plea, Mia replied, “Fine. I’ll give it six months.” That was in June of 2012. Six months later, in December 2012, F.A.I.M. Boutique opened its doors at 649 S. Saginaw Street.

The sisters say they love being located Downtown. “The business community here is so close,” said Marquitta, “because everyone is working toward a common goal: revival.” Mia added, “Small businesses are the heart of any city, and we’re proud to contribute to the vibrancy of Flint.” Positivity is the key to their efforts, the duo insists. “The positivity in this place just draws people,” said Mia. “We believe that everyone who walks through our doors is FAIMous, because they’re all moving up. We host events, like poetry recitations and our annual March of F.A.I.M. runway show, to uplift the community.” This year’s March of F.A.I.M. will be a weekend-long event, with the show scheduled for Saturday, March 15, an opening party on March 14, and a wind-down party on Sunday.

Me’Juana told My City Magazine that she and her sister inherited their style sense from their mother. “Our mom was a design mogul,” she said, “an interior designer who could do any job, even that which was considered man’s work. She believed that your surroundings should express yourself. Some days, we’d come home from school and the walls would be a different color from when we left!” Today, thanks to their mother’s influence, Mia and Marquitta see fashion as an expression of a person’s inner self, desires, and even mood. The girls say that bright colors express optimism and gaiety, while white demonstrates professionalism and independence; and as for black, they can’t say enough about it. “Black is sexy. Black is sober. Black is flattering. Black is whatever you make it and you can always wear it,” Marquitta insisted. Mia added, “All those people who say, Pink is the new black, are wrong. Black is always the new black.” It is not surprising then that the girls often incorporate the color into their own apparel, although they seek to achieve different looks. “Marquitta goes for a more couture appearance, while I gravitate toward modern, business styles,” said Mia.

The Harris sisters have big plans for the future, and they are relying on their faith to see them through their expansion plans. “We’re thinking of opening another boutique in Chicago,” said Mia, “and Marquitta is working with a fashion illustrator to design her own line, which will be called M.I.A., in honor of me!” Marquitta clarified that the name M.I.A. clothing, while it certainly pays homage to her beloved sibling, also stands for Missing In Action fashion. “Clothes need to be designed so that all women can embrace their body types and dress to showcase their beauty,” Marquitta told MCM. “High fashion is too exclusive; I want to make it more accessible.” Me’Juana and Marquitta are determined to change the fame game by helping each person who walks into their shop realize that they are already FAIMous: important, valuable and capable of great things. “One day,” Mia said with determination, “the word won’t be spelled famous, it’ll be spelled FAIMous.”

See more photos HERE, or purchase photos from this story by going HERE and selecting the “FAIM” category.