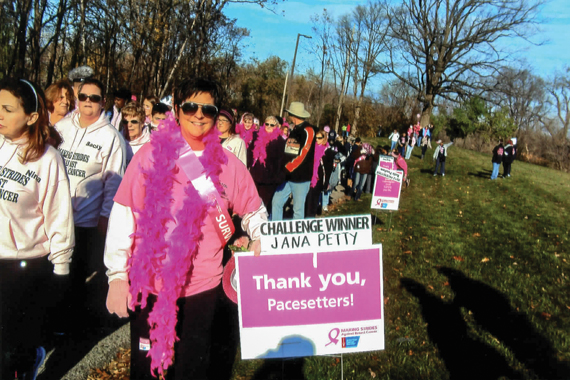 “I was in my early 40s, with a lot of life
before me, when a moment came that stopped
me on a dime. I spent most of the next days
looking at the X-rays, talking ‘bout the
options, and talking ‘bout sweet time.”

Lyrics from Live Like You Were Dying –Tim McGraw

During her drive to work each morning in 2010, Jana Petty listened to the words of this song. They were very meaningful to her because she had been diagnosed with breast cancer, and was facing four rounds of chemotherapy and six weeks of radiation treatment. Jana has now been cancer free for three years, and says that the experience had a profound effect on her life. Many of us take life for granted; but for those who have battled cancer and survived, every moment is precious. “I see things totally different than I used to,” she says. “I appreciate the simple things and take nothing for granted.” She added that she’s more willing to take chances and is more open now. “I also had to do what I call ‘weeding my people garden,’” she laughed, “because there is no room for negativity in my life.”

While the treatments were exhausting and the fight against fear was an everyday battle, Jana says that as an innately private person, the biggest challenge she faced was asking for help. “At first, I didn’t want to ask people for help, but I learned quickly to depend on others, and now I tell people, you don’t have to do it alone.”

Jana says the support of friends and family members was fundamental to winning her battle against cancer. She remembers how her son accompanied her to the first chemotherapy session, tears streaming down both of their cheeks, and how her aunt sent her a card every week with an uplifting message. “It made me smile; it meant everything to me,” Jana recalled. In addition to her personal support system, The American Cancer Society was instrumental in helping Jana through the treatment maze. When her post-chemo nausea became unbearable, the Society contacted an organization that helped pay for expensive anti-nausea shots, which Jana’s health insurance would not pay for and which she couldn’t have afforded on her own.

Now, Jana is giving back to those who are in the midst of the fight. This is her third year raising funds for Making Strides Against Breast Cancer, a national campaign of the American Cancer Society, and she says it’s empowering to work toward ending the disease forever. “Team Jana” raised $2,600 last year, earning them the rank of Pace Setter (teams that raise more than $2,500). In particular, she remembers a donation from the Fenton Youth Football team, who touched her heart when they gave $890 to Team Jana. This year, Jana has made it her goal to exceed last year’s total. “Making Strides Against Breast Cancer is how I give back,” she says, “and I’m so grateful for the support of the businesses and members of the Fenton community.”

The American Cancer Society’s Making Strides Against Breast Cancer walk unites communities to celebrate those who have battled breast cancer and educate the public about ways to reduce their risk while raising funds for research on new treatments and a cure. Since 1993, nearly seven million walkers have raised more than $400 million to help fight breast cancer by participating in non-competitive, 3-to-5-mile walking events. The Flint walk is set for Saturday, October 26 beginning at 10am in Downtown’s Flat Lot. There are 114 teams expected to participate.

Debbie Pavone, a Community Representative with the American Cancer Society in Flint, said that while many of the funds raised through Making Strides walks are used for research, the money also benefits local programs, such as Road to Recovery, which provides rides to patients who have no way to get to their cancer therapy sessions. Another local program is called Look Good Feel Better, which helps female cancer patients improve their appearance and self-image by teaching them hands-on beauty techniques to manage the esthetic side effects of chemotherapy and radiation treatments. “We are really excited about the upcoming Making Strides event because we know how beneficial this money will be for the local cancer community,” says Debbie.

October is National Breast Cancer Awareness Month, an effort to raise awareness about the importance of early detection and the necessity of regular screening. The statistics cannot be ignored, as approximately one in eight women will be diagnosed in their lifetime; however, it is not a hopeless fight: today, there are more than 2.9 million breast cancer survivors in the U.S.

Jana has yet to go skydiving, Rocky Mountain-climbing or ride 2.7 seconds on a bull named Fu Manchu. But as a breast cancer survivor, each moment of her life is sweeter, and she wakes up every morning ready to do as the song suggests: “Live like you were dying.”