The air was still. T.B.W. Stockton and his men stood quiet and ready. In just a few minutes time, the Battle for Gaines Mill would begin, throwing the field before him into chaos and his men into danger. Earlier that spring, General Stonewall Jackson harassed the Union Army throughout the Shenandoah Valley, slowly whittling away at it; while General Robert E. Lee amassed a huge number of men for a vicious assault, starting with Gaines Mill. It was up to General Fitz John Porter’s corps to stem the tide of setbacks and continue McLellan’s advance on Richmond. Stockton and his fellow union soldiers were outnumbered, but confident that they will be able to hold.

The order was given. Cannons sounded as the men pushed forward. Shouts and gunfire filled the air as they fought and died. Stockton ordered his men to fix bayonets as the Confederate Army began to break through the front Union lines. Rebels fought toward them as the Union soldiers fell. In an attempt to save being flanked, Stockton ordered his men to fall back. His men panicked and began rushing for the bridge over the Chickahominy River. Stockton knew this was a fool’s route and instead, ordered his remaining men into the timber and swampland surrounding the battlefield. There, Stockton and his men fought all through the night, eventually being surrounded. They were captured just after daylight the next morning. Colonel Stockton and the 16th Michigan Infantry were prisoners of the Confederate Army. 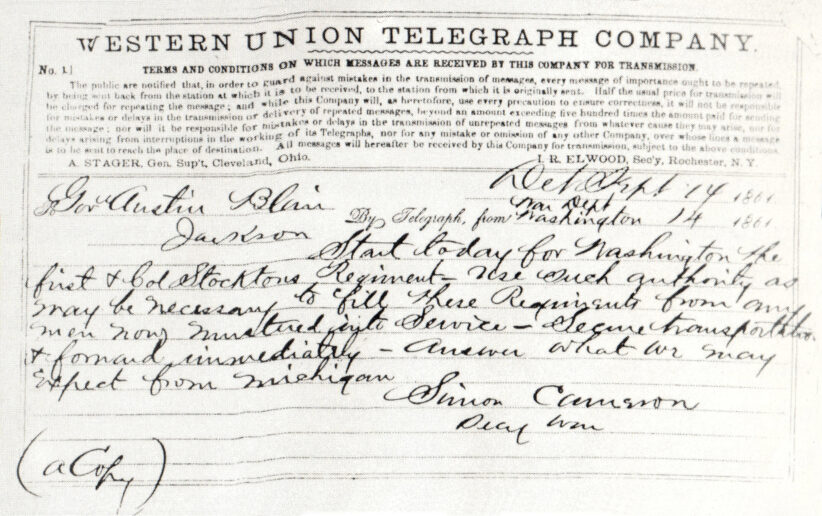 Colonel Thomas Baylis Whitmarsh Stockton played a critical role in the development of the City of Flint and the State of Michigan. He was instrumental in the construction of the Flint School for the Deaf and formation of the Genesee County Agricultural Society, and his landholdings and engineering work paved the way for Flint’s prosperous downtown. His wife, Maria Stockton, organized and was appointed the first president of the Ladies Library Association, which grew to become the Flint Public Library. Colonel and Mrs. Stockton were persons of honor and integrity who shared a love of Flint, its development and people.

Born in Delaware County, NY in 1805, young Stockton was the 13th and final child of Charles and Elizabeth Stockton. His mother died shortly after childbirth and his father neglected to take him in; allowing one of his mother’s married sisters to adopt him. He grew up and resided in the home of Dr. and Mrs. T. B. Whitmarsh until joining the Military Academy at West Point at the age of 17.

Stockton graduated in high academic standing and entered military service as a Brevet Second Lieutenant. The following year, he was promoted and assigned to Fort Snelling, MN (under command of future president, Zachary Taylor) where he met Maria G. Smith, adopted daughter of General Garland and youngest daughter of Jacob Smith, the first white settler of Flint. The couple were quickly married at Prairie Du Chien, WI in 1830.

While in the military, Stockton was in demand for his skills as a topographical engineer and was detailed to Detroit to build a series of military roads and bridges. While surveying the turnpike which ran from Saginaw to Detroit, Stockton visited Flint for the first time. Due to his father-in-law’s hard work, Stockton and Maria inherited a wide swath of land in the city bordering the river itself. In order to stay in the city, he resigned from the army in 1836 and took the civilian position of civil engineer for the government. His first duty was the improvement of harbors on the Great Lakes in Indiana, Ohio and Michigan. Stockton left Michigan between the years 1836-38, conducting surveys and acting as the mayor of Michigan City, Indiana for a year. He established his permanent residency in Flint between 1839 and 1841.

In 1847, the U.S.- Mexican War broke out and Stockton was mustered back into service and given command of the First Michigan Volunteers – the only regiment raised by the State of Michigan for the campaign. In the small town of Cordova, Mexico, the regiment acted solely as an occupation force until the end of the war in 1848. After returning home, Stockton donated 20 acres of land on the southern edge of his holdings for the campus of the Flint School for the Deaf. In 1850, Rowland Ferry, John Cage and Stockton formed the Genesee County Agricultural Society to promote agriculture, horticulture, household and mechanical arts. A year later, Maria Stockton held a meeting of ladies in her home to consider forming a community cultural society. The ladies quickly determined that Flint needed a permanent library. The idea was approved and the Ladies library Association was born (the first in the state) with Mrs. Stockton as first president. In 1852, Stockton, Maria and their son, Baylis, braved the Oregon Trail to join the gold rush in California. In 1858, Stockton and wife came back home none the worse for wear, while Baylis remained in California. Stockton, then organized and became captain of the Flint Union Greys in preparation for the conflict to follow. 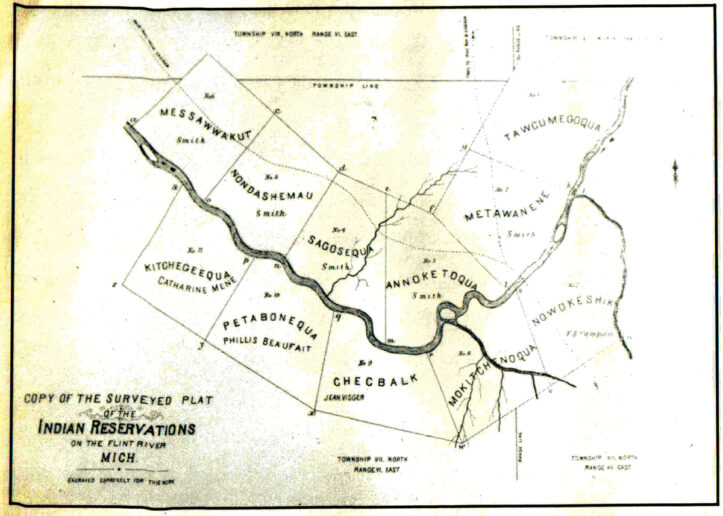 When the Civil War began in 1861, Stockton pleaded with the military for a command as the Union Greys were handed to another, but was denied. Refusing to accept his dismissal, he traveled to Washington where he met with President Lincoln to plead his case. Lincoln referred Stockton to his secretary of war and wrote a letter containing his endorsement. It read:

My Dear Sir: I think it is entirely safe to accept a fifth regiment from Michigan, and with your approbation I should say that a regiment presented by Col. T. B. Stockton, ready for service within two weeks from now, will be received. Look at Colonel Stockton’s testimonials.

Stockton raised his regiment and in 1862, was ready at the siege of Yorktown. In June of 1862, Stockton and most of his regiment was captured at the Battle for Gaines Hill. He was sent to Libby Prison in Richmond where he would remain until his release in a prisoner exchange in August. He rejoined the army and was given command of the Third Brigade, First Division, Fifth Army. He went on to fight at and survive battles at Antietam, Fredericksburg and Chancellorsville. In 1863, he resigned his commission at the age of 57. His injuries sustained in battle and in prison were taking their toll. It was time to come home.

Back in Flint, Stockton opened a number of business interests and began helping to shape the downtown district. The famous Stockton House was built in 1872 and would later become a hospital, a nursing home and a museum.

Colonel Stockton died in 1890 at the age of 86. His funeral procession passed slowly down Saginaw Street to Glenwood Cemetery, his coffin was draped in the flag that had belonged to his Civil War regiment. He was laid to rest near the tomb of his father-in-law, Jacob Smith, while a squad of soldiers fired a parting salute over the grave. 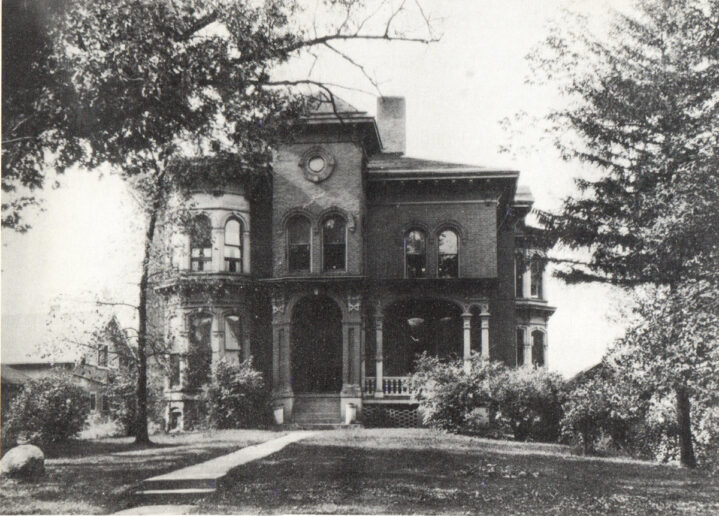 One of Flint’s most notable historic landmarks, the Stockton House was built in 1872 and overlooks a natural spring which the Stocktons nicknamed “Spring Grove.” In the 1920s, the Stockton family sold the house to the Sisters of St. Joseph, which then became the first St. Joseph Hospital in Flint. Next, the house became the Kith Haven Nursing Home. It now operates as a museum.

After speaking with president Lincoln, Stockton received command of the Michigan fifth infantry regiment. The telegraph at left reads: for austin blair by telegraph from war department, washington. start today for Washington the first of Colonel Stockton’s regiment. Use such authority as may be necessary to fill these regiments from any men now mustered into service – secure transportation and forward immediately – answer what war secretary expect from michigan. Simon Cameron, Secretary of War.

The survey plat of Indian reservation land along the Flint river shows the vast landholdings of Jacob Smith (north of the river). Through marriage to Smith’s youngest daughter, Maria, Colonel Stockton inherited much of the land the city sits on today.

Colonel Stockton joined the civil war in 1862 at the siege of Yorktown. He was captured with his regiment at the subsequent Battle of Gaines Hill. After release, he fought at Antietam, Fredericksburg and Chancellorsville. He resigned his commission in 1863.