Local Beecher High School graduate, William Toll, who received his first guitar from his parents at age 14, laughs about his former ‘‘big hair days” and how he used to play in a classic rock and 80s punk band called “Toll,” right after graduation. Thirty years later, his first guitar now hangs alongside 30 more in his custom-designed recording studio.

“I’m what you call a one-man-band,” says the Flint-native musician, who is no longer known as William Toll. He was dubbed Sweet Willie Tea eight years ago when a singer-songwriter friend, David Standridge, joked how nothing could quench a music fan’s thirst for Willie T’s rhythm and blues, Memphis roots, country and Americana-style of playing. He wrote a song about him called “Sweet Willie Tea,” and the name eventually stuck. 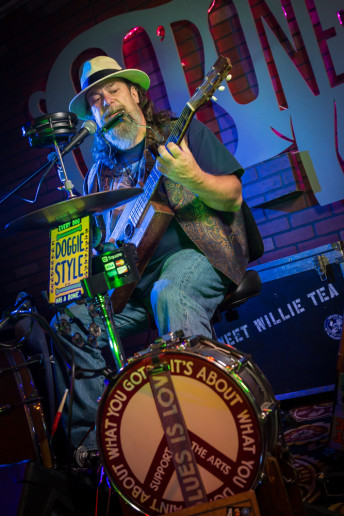 Willie not only plays a variety of instruments, but also pulls his experience as a graphic designer and comedian into his shows. He sings and plays solo on the vintage instruments he is known for including: the foot drums, ukulele, cigar box guitars, diddly bow, harmonica, and steel and wood-bodied resonator guitars. “I’m just a guy on a stool, in an intimate setting with my audience, and I banter back and forth while entertaining them with my music.”

Although his real passion has always been music, that dream, Willie discovered, would actually be on hold for several decades while he dabbled in two other careers: improv comedy and graphic arts. “I learned the craft of graphic design at Genesee Skill Center in Flint, and got a job right away.” He worked hard and learned everything he could in the graphic arts and advertising industries.  “The work eventually dried up,” he says. But that didn’t stop him. He went on to reinvent his graphic design career using computers and modern software, and currently offers creative services such as graphic and web design through his Flint-based company, Fine Line Design. “It’s a job I do during the day,” he says. “The flexibility allows me to perform on nights and weekends.” He adds visual appeal to his stage set with decorative, colorful pieces of art. “I put my graphic art prowess to use,” he smiles. “I like to provide a fun stage presence.”

His next career, however, was a close cousin to the musical performing industry. “I got involved with improvisational comedy and reality theater,” he explains. He studied the process of Second City-style sketch comedy and eventually, worked his way up to be the director of Flint’s Buckham Alley Theater Back Alley Players Comedy Improv Troupe, which he did for 20 years. 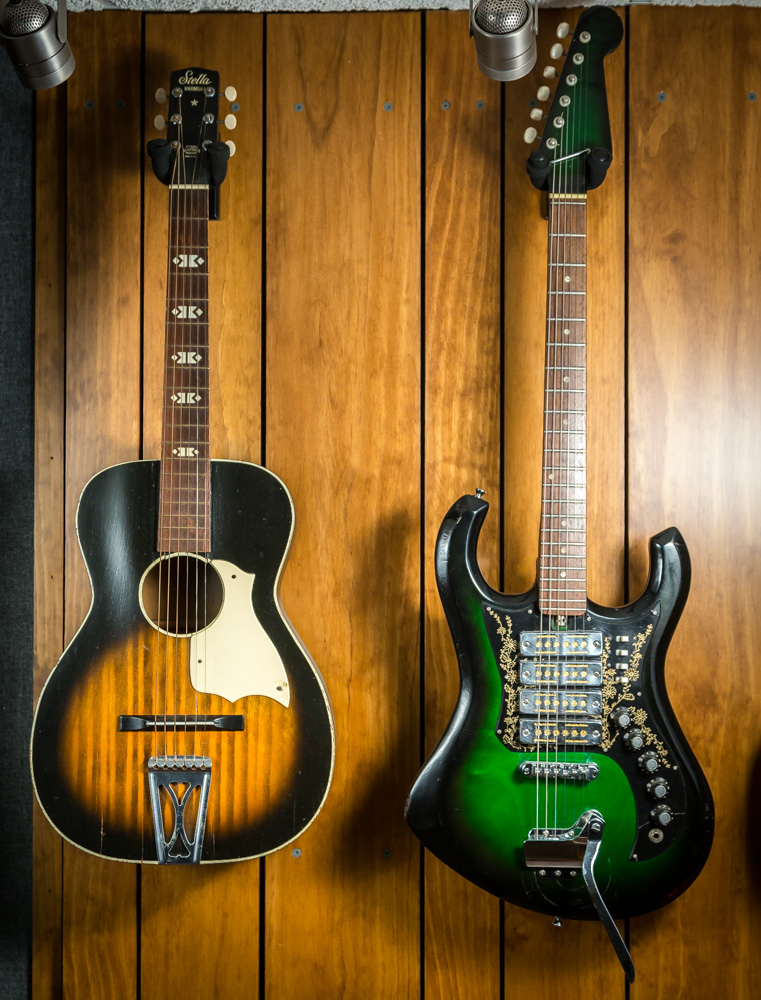 One favored guitar (R) he bought and sold decades ago, then tracked down and bought back.

It wasn’t until he had a winter sporting accident that he decided to refocus on music. “I was left with no use of my left hand,” he shares. “I had nerve damage and plates were surgically implanted in my hand.” He could only execute a closed motion of his hand and wore a spring-loaded hand brace for months, but that only offered the ability to squeeze the neck of a guitar.

“During that time, I taught myself how to play the piano and harmonica,” he recalls. A year later, he gradually regained use of his hand. Astonishingly, the accident would launch him back into his passion – music. “I felt like my hand injury was a sign from God,” he says. “When my hand started working again, I took it as a sign to be able to choose music again.” 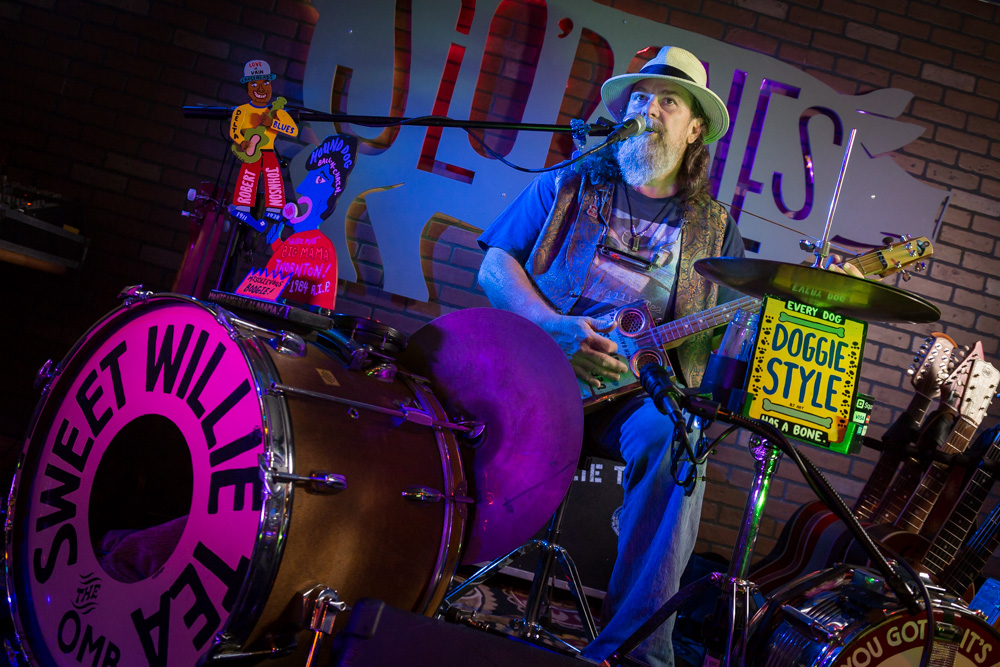 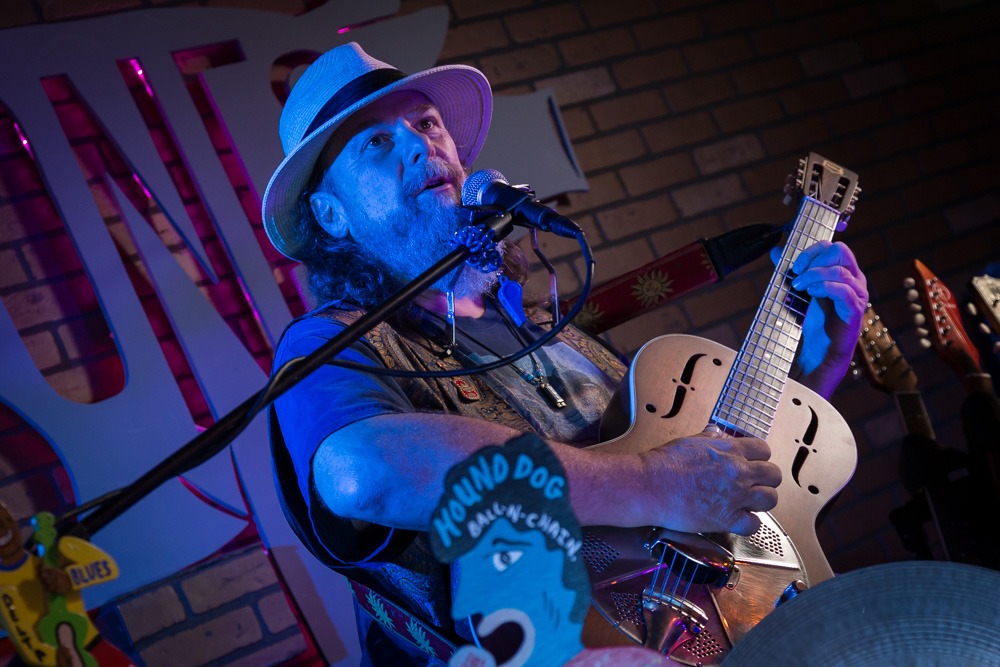 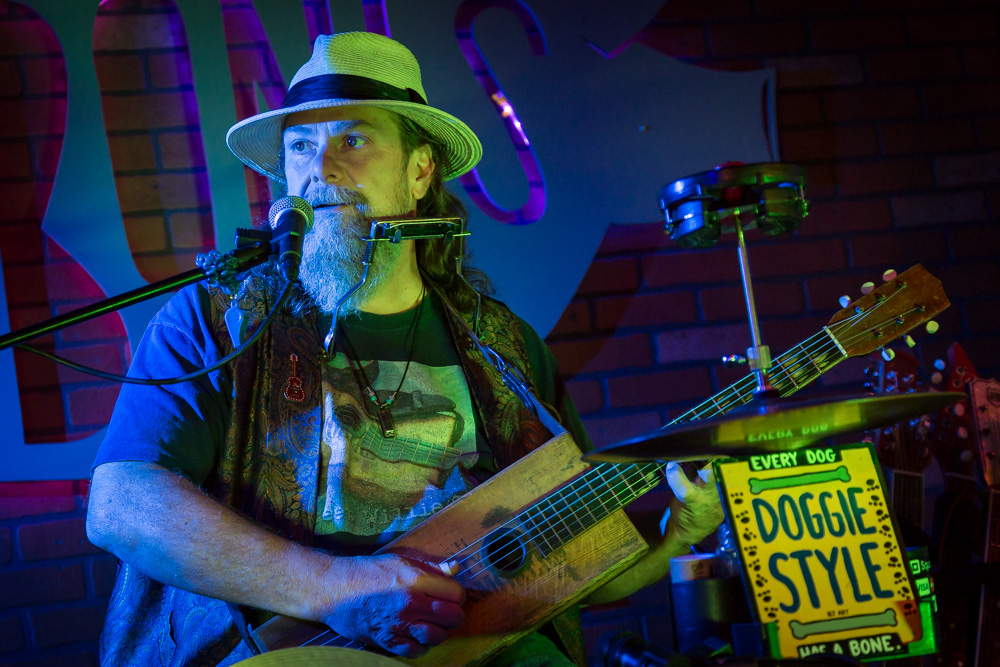 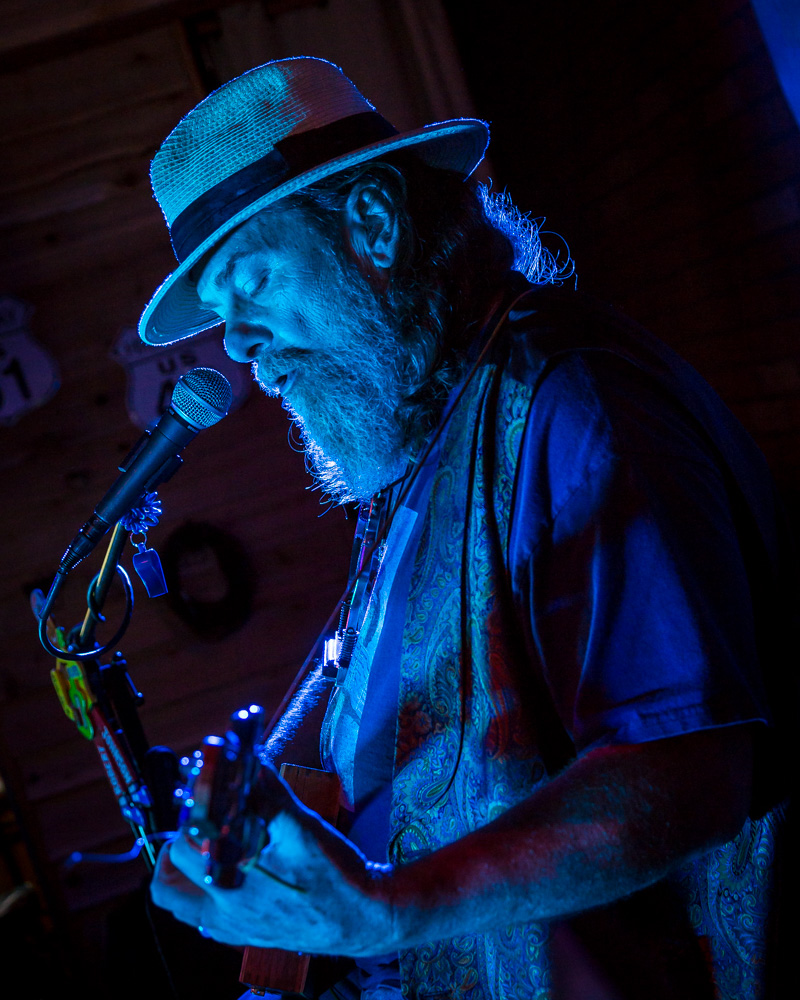 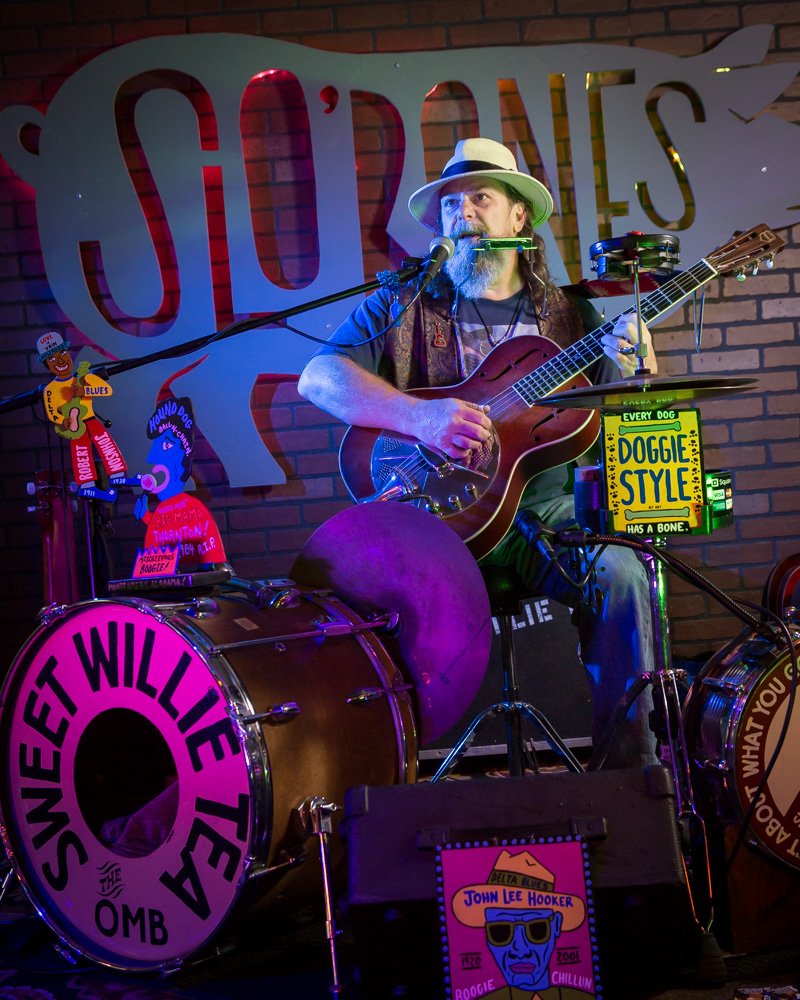 Not knowing it then, Willie would come to use his skills in comedy, design and improvisation years later in his one-man-band. His improv and comedy experience gave him the confidence to encourage audience participation, when he douses them with humorous conversation and jokes. His improv training influenced his performance skills, as did his wife, Mary, a second-grade teacher at Clio Schools. “Mary taught me one important skill: ask people questions about themselves. It gets them to open up and you can find a way to connect,” he says.

But offstage, Willie admits he still struggles with a touch of anxiety and calls himself an introvert. “It’s always been hard to talk to strangers,” he reveals. “I’m not all that social or comfortable with crowds.” He explains, “I basically learned how to flip a switch when I go on stage,” he says. “That’s where I can shed my fears and passiveness. I’ve also learned that people like it when you make light of your own imperfections. You’re a real person to them after you’ve told them some of your flaws. I try to make that connection with people when I’m performing.” His three- to four-hour performances don’t include many breaks, which pleases his audiences. 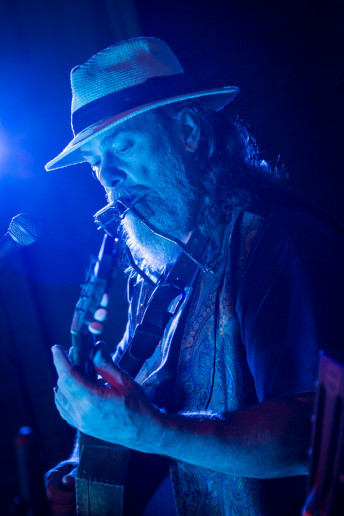 “I’m just a guy on a stool, in an intimate setting with my audience.”

The local legend serves as the secretary of Detroit Blues Society, and earned a semi-finalist title in the Memphis International Blues Challenge (IBC) in 2011 and 2013. He has evolved over the years and built a reputation and fan base which spans from Michigan to Key West, Florida, where he takes his act during the winter. Admirers from both states show up to see him perform his audience-engaging, dialogue-exchanging musical act. He can be seen at area venues such as bars, clubs, outdoor patios, music festivals and barbecue rib restaurants – specifically, Beale Street Smokehouse BBQ in Fenton, Slo’ Bones BBQ Smokehaus in Frankenmuth, and Bert’s at Eastern Market (famous jazz club and entertainment complex) in Detroit. Sweet Willie is in demand at various corporate and private parties, senior centers, or just about anywhere there is enough space to set up his rig.

Sweet Willie Tea hopes to be in the music spotlight and pleasing crowds for as long as possible. “I love to write my own songs and tell stories,” he says. “When I’m on the stage, my goal is to connect with my audience and give them something different than what they’re used to.”