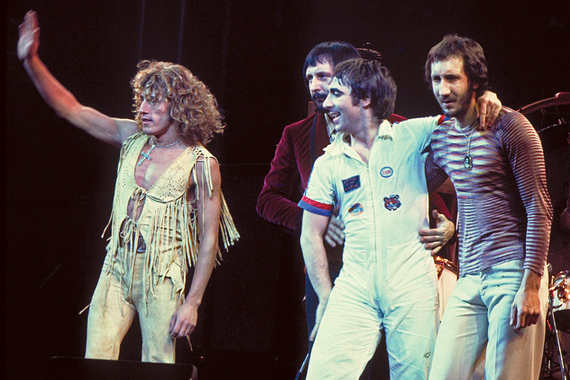 Each night, 10,000 crowded into an amphitheater built to accommodate far fewer, while 20,000 more unable to get a ticket remained outside listening to the music as best they could. At least they were there. Being there was becoming a cultural imperative – wherever “there” might next be.

Ken Kesey and his Merry Pranksters were there at San Francisco’s Fillmore Auditorium, where a young hustler named Bill Graham had visited the Pranksters’ “Electric Kool-Aid Acid Test” experiment. This had been staged as a one-time, spur-of-the-moment “happening” at the venue. Knowing promise when he saw it, Bill had leased the hall and turned the place into a regular Rock & Roll Emporium. He peddled Big Brother and Janis, The Doors, Moby Grape, Jefferson Airplane and The Grateful Dead.

“Acid Rock” became a generic description of the Fillmore bands.

Back in Flint, former WTAC DJ Terry Knight appeared at Mt. Holly with his group, “Terry Knight & the Pack,” featuring Mark Farner on guitar and Donnie Brewer on drums – initiating an alliance which would eventually produce the first group to ever outsell the Beatles at New York’s Shea Stadium – Flint’s own “Grand Funk Railroad.”

In August, “Herman’s Hermits” were scheduled to headline a major show at Flint’s Atwood Stadium. Among the opening acts were several young British musicians who had banded together in 1965 and were introduced to U.S. airwaves over WTAC later that year with their first Decca Records single. It was called, “I Can’t Explain.” It is well known and acknowledged in Rock & Roll history books that Flint’s WTAC was the first radio station in America to ever play The Who.

By cosmic convergence, August 23, 1967 was also declared to be Who drummer Keith Moon’s 21st birthday. He and his band mates brought a birthday cake to the WTAC studios in celebration of the momentous occasion.

Program Director Bob Dell and I interviewed the group and pushed the upcoming show. Ticket sales had been slow. Nobody really knew who The Who might be. This was their first major U.S. tour with little attention being yet paid by the trades or the “teeny-bopper” magazines that were flourishing everywhere. The concert promoter had counted on “Herman’s Hermits” for drawing power, but they were on a bit of a fade. “Mrs. Brown, You’ve Got a Lovely Daughter” only sounded good under the influence of bubble gum.

Under cloudy skies and with only several thousand in attendance, the “The Blues Magoos” were introduced and did a fine 30-minute set, closing with their biggest hit, “(We Ain’t Got) Nothin’ Yet.”

After 20 minutes of equipment changes, The Who took charge of the stage and EXPLODED!

Take no prisoners. It can’t get any louder. Yes, it can! He’s setting fire to his guitar. That other one’s breaking everything … there go the amps! The singer just booted a tympani drum through the goal post! Everything’s blowing-up! The feedback’s still screaming!

The Who left the stage completely destroyed. Show’s over! ROCK & ROLL!

The crowd reacted with proportionate appreciation.

Hope I die before I get old.

Bob and I left Atwood Stadium with The Who after they playfully trashed what was left of their makeshift dressing rooms. More than half the crowd had deserted the stadium, exhausted from the Who’s remarkable performance and in no mood to bring themselves down. Herman’s Hermits bravely started their set with “There’s a Kind of Hush.” They certainly had that right.

For us, it was on to Keith Moon’s birthday party at the Holiday Inn on Bristol Road – just down the road from Bishop Airport.

All the heavy record guys from Detroit were on the scene. Word was out. Decca Records had rented the hotel’s largest conference room for a heavy-duty celebration and it opened onto a large, poolside party-deck. There was of course a gigantic cake and sure enough, out jumped a frosting-coated girl. Perfect! Bottles of expensive champagne lined a festively decorated table. Outstanding! The bar was wide-open and we could drink as much of anything we wanted. An enormous buffet table groaned under the weight of every delicacy in the world.

We were soaring with The Who!

“Who gave Keith the car keys?”

“He’s driving a Caddy it into the pool!”

Things had taken an epic turn – an occasion commemorated a full 31 years later in 1998 when Lizz Winstead, creator of “The Daily Show” with Jon Stewart, visited Flint and filmed an interview with me for “Rock & Roll Record Breakers” on VH1, along with several other witnesses to the historic and now legendary “Cadillac in the pool” incident. As a consequence of naughty Keith’s decadent Flint splashdown, The Who was banned from Holiday Inns around the world for several decades, thus earning the dubious distinction cited in the VH1 program title.

Leaving havoc in our wake, Bob Dell and I were joined by several band people and Peter Townshend himself on a drive to Contos’ Lounge on South Dort Hwy. Keith Moon reported he had experienced the very finest birthday celebration ever. Unbelievably, the party had outdone The Who’s performance. We were impressed!

The Doors had entered the charts in April ’67 with “Light My Fire.” WTAC also placed “Break On Through (To the Other Side)” into heavy rotation. We were regaled with stories of The Doors’ wild front man, Jim Morrison.

Scott McKenzie saluted the end of summer with “San Francisco,” where all the hippies wore flowers in their hair. The streets of Haight-Asbury were crowded with would-be seekers of truth and love. They wore beads and tie-dye, smoked dope, did speed, dropped acid and worshipped at the altar of Rock & Roll. There was standard ritual in the absence of formal liturgy.

Chuck Berry also played Flint in early fall at the IMA Auditorium. He was highly regarded by the Beach Boys, who also played at the IMA and visited WTAC for interviews.

After Berry’s performance, I took him to another Flint nightclub, The Stardust Lounge on S. Saginaw Street. He joined Johnny Gibson’s band from Toledo for a few classics.

Chuck was a soft-spoken gentleman, but had eyes prison-hardened from time served and bitter experiences with the white establishment in the late ‘50s. Certain suspicions and cynicisms remained.

It was in October of ’67 that I discussed the idea of taking the last two hours of my 7-Midnight program and feature only rock album cuts within a completely new programming approach. This was unheard of in contemporary radio.

Flint’s “WTAC Underground” on the AM dial was about to become an industry prototype for the evolution of FM radio across America.

Stay tuned for the next issue: