Every Thursday morning, you can find Annie Van Leuven hopping onto a golf cart at Fenton Farms Golf Club in Fenton with her daughter Karen, and granddaughter, Camille. Annie, who celebrates her 100th birthday on June 8, has golfed on Fenton Farms Ladies Day for 49 years. It’s a little tougher for her to swing a golf club these days, she admits, so she uses a swingless driver, which drives the ball about 200 yards. But, she chips and putts unassisted. At one point, she was in the Champion Flight – now in Flight 3, she says she isn’t the worst golfer. “It’s a lot like bowling: some days you’ve got it and some days you don’t,” she laughs. This spunky, soon-to-be-centenarian not only golfs weekly, she drives a brand-new Equinox, lives independently in Burton and enjoys good health. Annie took up golf when she was 50 and remembers when it was considered a man’s game. “Back in the day, women couldn’t go out on the course until after 1pm on Sundays!” she exclaims.

Annie was born in 1918 in Trotter, PA, the daughter of Polish immigrants, Anna Wnetrzak and Andrew Jedynak. The family moved to Flint when she was a youngster. She married James Hobson, Sr. when she was 15 years old and they had four children. She now has 11 grandchildren and 23 great grandchildren. “I have five new great-great grandchildren this year,” she shares, with a sparkle in her eyes. After James passed away, Annie met and married William Van Leuven, bringing her another group of children to love and call family. They were married for 14 years, until he passed in 2016. She was always a stay-at-home mother. “Women really didn’t start going to work until World War II,” she says. 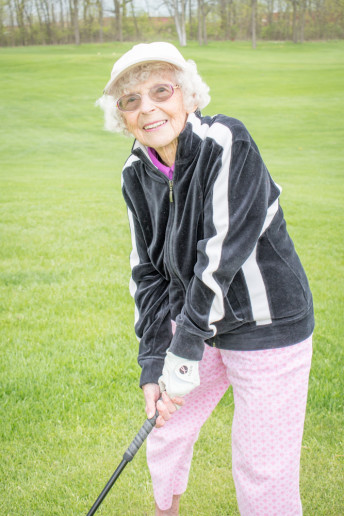 As one can imagine, Annie has seen a lot of things change during her lifetime. Growing up, her house was without indoor plumbing and she scrubbed clothes on a washboard. “We would wring the clothes out by hand,” she recalls. “I still have that washboard.” She remembers walking down the block to get water from a city pump and carrying the heavy pails back home. There were no cars, televisions, telephones or paved highways at that time.

During the Great Depression, she remembers using stamps to purchase food and gas. “I remember when a quarter could buy you milk and a loaf of bread,” Annie laughs. Her husband purchased their first automobile in 1935, a Roadster with a rumble seat in the back. They bought their first house for $800, “The monthly payment was $10 and sometimes, we couldn’t pay it, just the interest, because times were so tough.”

Annie still remembers the Beecher Tornado that occurred on her birthday in 1953. It is listed as one of the Top 10 deadliest tornadoes in the United States, destroying 340 homes and damaging many others. Annie and her family lived near Miller and Corunna Roads at the time. “We knew the weather was bad, but we didn’t know that it hit that close to home,” she remembers. “My husband called from the Masonic Temple to see if I was okay.”

Annie has also seen many changes at Fenton Farms Golf Club over the years, which dates back to the 1930s and has changed names a few times – formerly Long Lake Golf Course, Shore Acres and Torrey Pines. When she first started playing there, it was pretty rough, she remembers. “The golf course is beautiful now. And Chris (White), the owner is so wonderful.” The Thursday Ladies Day at Fenton Farms started prior to 1969, which is when Annie joined, but no formal records were kept prior to that. It isn’t a league, she explains, “you only pay when you play.” It begins in April with a Spring Luncheon and ends in October with an Awards Luncheon. Annie was president of Ladies Day in 1977. 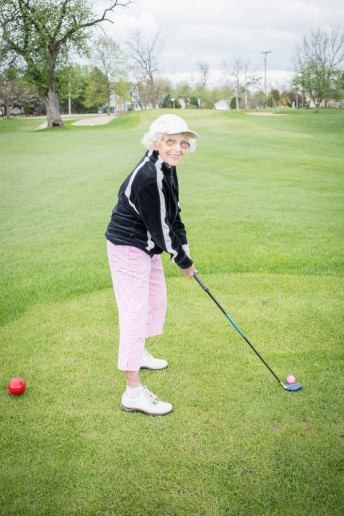 Ladies Day has grown over the years and now has 130 members. Annie is usually one of the first golfers out on the course on Thursday mornings. After playing nine holes, she joins the other women in the clubhouse where they enjoy lunch and then play cards. And every year, the ladies celebrate Annie’s birthday with a cake. “I feel fortunate to be part of such a supportive group,” she says, “Through illness, the death of two husbands and other hardships I have faced, they’ve been there for me.”

Annie’s family will hold a special celebration in honor of her 100th birthday. “All of the kids will be there, like a family reunion,” she shares. “There will be a special time to celebrate with my family and another with friends. I have a lot of doctors coming, too. They all want to be there!”

What is the secret to Annie’s longevity? She says she stays busy and active. She enjoys walking, playing cards, taking trips to the casino and visiting family. “I probably do a lot of things I shouldn’t,” Annie admits. She also attributes her long, healthy life to the love and support of her family. “My whole life has been wrapped around my children. I love them to death, but I don’t pester them. I’m with young people all of the time. That’s the secret.”