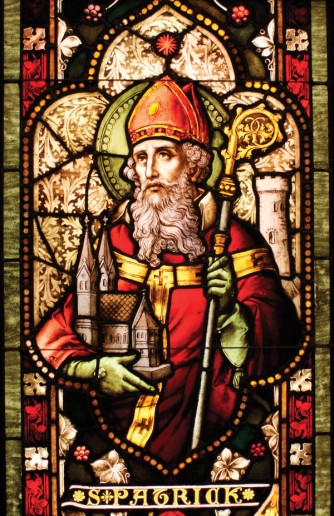 Why is the shamrock associated with St. Patrick’s Day? Why do people wear green on that day? Who is St. Patrick, anyway?

People all around the world celebrate St. Patrick’s Day on March 17, the Roman Catholic feast day of the patron saint of Ireland, St. Patrick. But did you know that he wasn’t even Irish? Patrick was born in Roman Britain, and then kidnapped into slavery when he was 16 and brought to Ireland. He escaped to a monastery in France where he converted to Christianity, returning to Ireland in 432 as a missionary to convert the pagan Irish to Christianity. While Christianity had already taken hold in the country, tradition has it that Patrick confronted the Druids at Tara and abolished their pagan rites, making Christianity more widespread. He became a bishop and, after his death, was named Ireland’s patron saint.

The traditions associated with St. Patrick’s Day today are connected to our country’s roots. Eighteenth century Irish soldiers who fought in the Revolutionary War held the first St. Patrick’s Day parades as a way for the Irish to connect with their roots after they moved to America. The color green has been associated with Ireland since the 1600s. The phrase “wearing of the green” comes from a song of the same name which laments United Irishmen being persecuted for wearing green. According to legend, St. Patrick used the three leaf clover (or shamrock) to explain the Trinity to the pagan Irish.

On St. Patrick’s Day, corned beef and cabbage is the meal of choice, but it isn’t actually the national dish of Ireland. During the time of the Irish immigration to the United States, the first generation of Irish-Americans searched for the comforting tastes of their homeland. On St. Paddy’s Day, that meant boiled bacon. But the immigrants were too poor to afford the high price of bacon, so they turned to the cheapest cut of meat available: beef brisket. “Corned” refers to the corn-sized salt crystals used during the brisket-brining process. The corned beef was paired with cabbage, as it was one of the cheapest vegetables available to the Irish immigrant.

As we celebrate St. Patrick’s Day by wearing green and eating Irish food, we remember the Irish traditions that have endured for generations. ♦