Exciting things are happening at St. Luke’s N.E.W. Life Center as it continues to live up to its mission statement of providing life skills, education and workplace training, empowering women and men to become self-sufficient. The Center, which opened in 2002, was co-founded by Sister Judy Blake and Sister Carol Weber with the initial mission of helping at-risk women become self-sustainable. “But there were a lot of men out there and they wanted a program too,” says Sister Judy. So, two years ago, N.E.W. Life began offering a program of employment preparation for men.

The Center offers educational programs and social enterprise and consists of 23 components in areas such as employment training, nutrition, fitness, and domestic violence prevention. The facility also offers programs for the community such as the Hot Meal Program and the Food Pantry, which provides food for the needy on a monthly basis. “The food pantry has grown by leaps and bounds,” Sister Carol reports. The food in the pantry is purchased from the Food Bank of Eastern Michigan and the Center receives donations of fresh vegetables and baked goods from many different sources. In August, the Center served 747 free meals, reports Sister Carol. Other programs offered to the community include a Christmas giveaway, and a donation center for clothing and household items.

N.E.W. Life also operates businesses that employ program graduates, including a sewing business for women and a lawn maintenance program for men. “We started with our sewing business because it is a wonderful pastime,” Sister Carol says, “and the women love to sew.” The newest partner for the women’s sewing program is Stormy Kromer out of Ironwood MI, a well-known manufacturer of outdoor gear. “They needed seamstresses and we needed a contract,” smiles Sister Judy. The Center will make men’s five-pocket vests and mittens for men and women. Six women from the Center made the trip to Stormy Kromer to learn how to sew the garments. 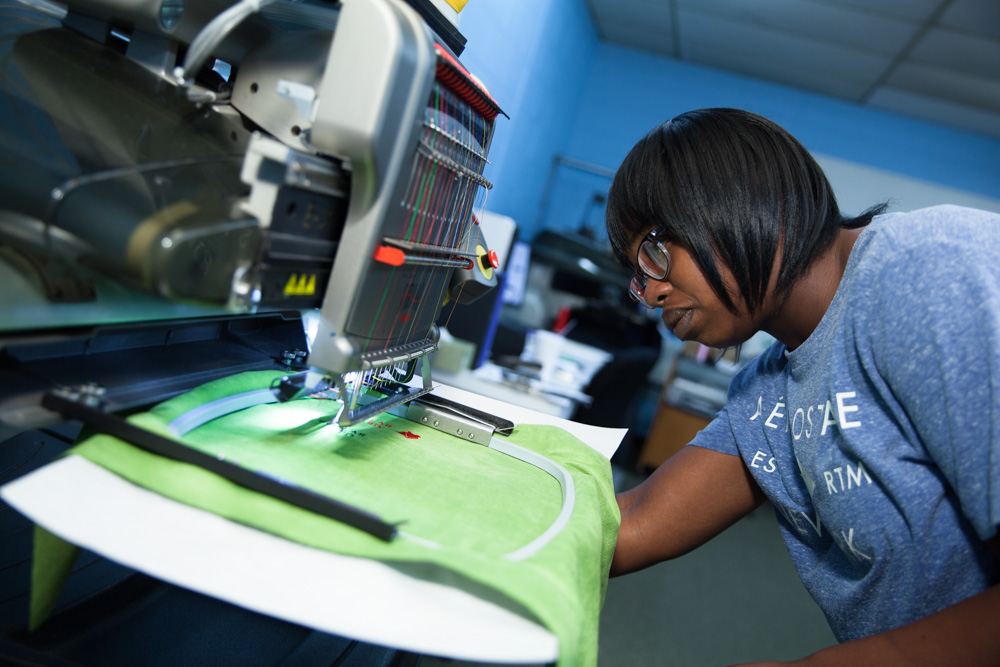 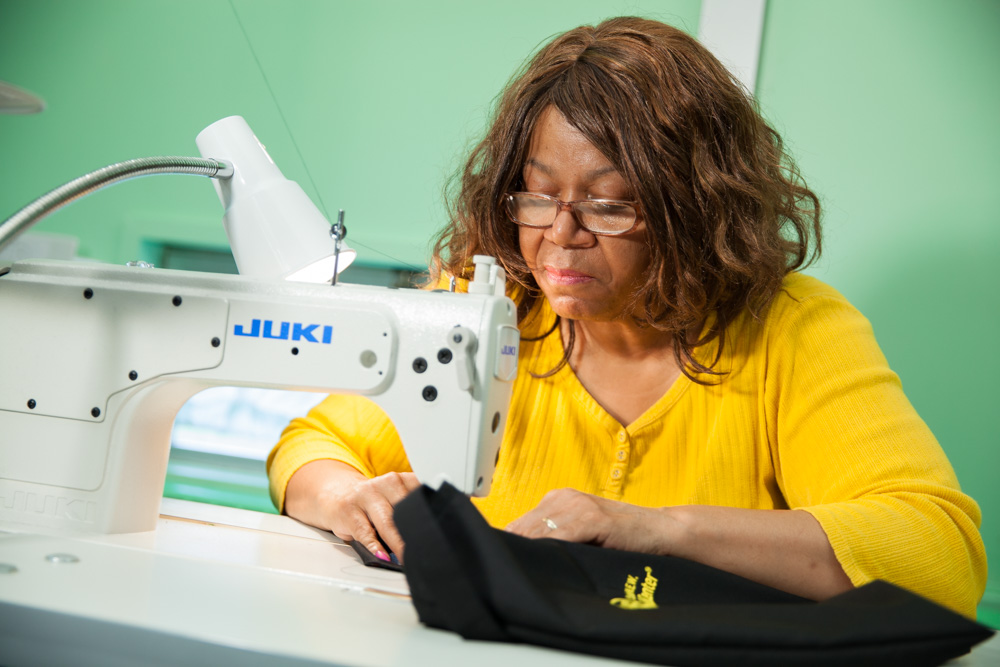 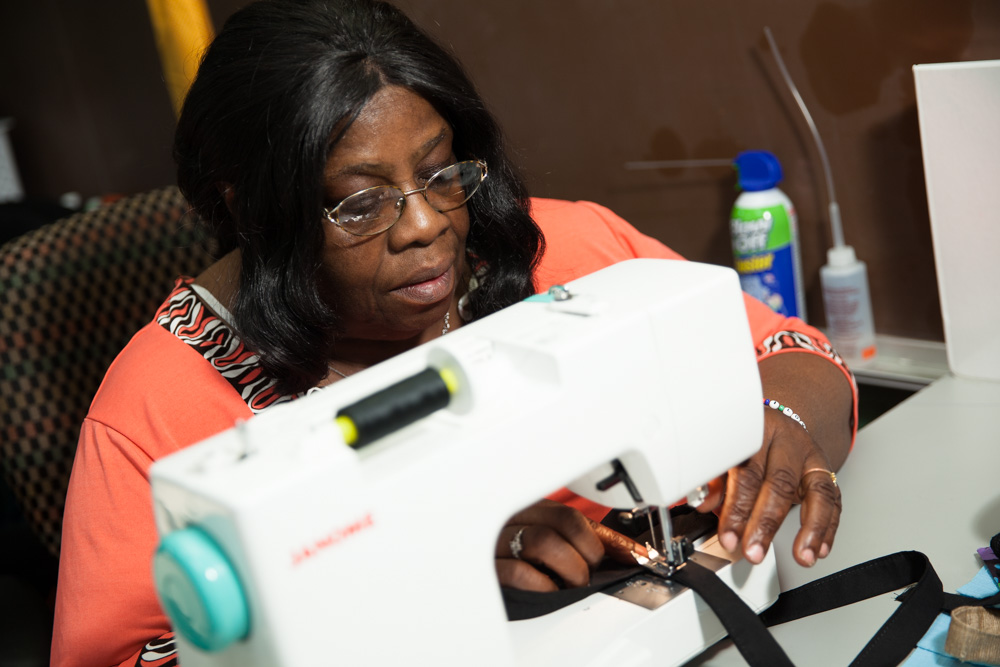 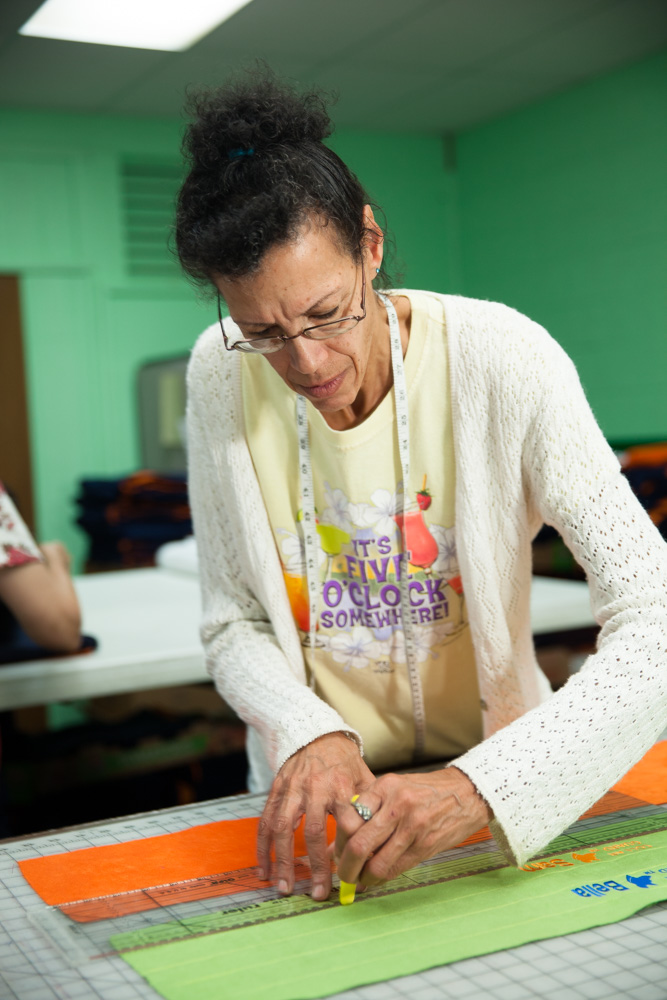 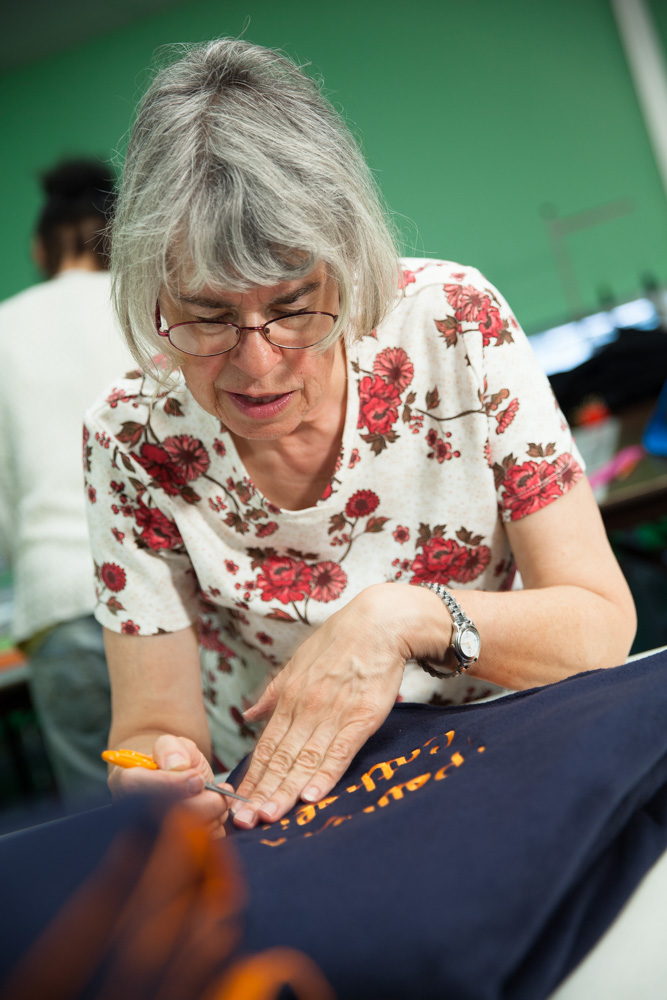 Diplomat Pharmacy and Baker College are corporate sponsors of St. Luke’s N.E.W. Life Center and there are many partners; most recently, Tim Goyette of Goyette Mechanical came on board in August. “I wish I had been here years ago,” says Tim. “It’s God’s work and a blessing for me to be here.” Tim is working with the lawn care team and is also using his business expertise and network to help build relationships with organizations and businesses. Through his connections with the building trades, he is working to link graduates of the Center’s program with potential employers. “It’s a nice fit for me,” says Tim. “I’m getting good feedback from the trades people and am close to landing some employment opportunities for the men and women here.”

What has made Tim even happier is that his brother-in-law, Joe Parks, has become a volunteer for the Center. A retired detective from the Genesee County Sheriff’s Department, Joe uses his expertise to help people who have blemishes on their records or other legal issues. “For 30 years, my job was to lock people up,” laughs Joe, “and now I’m reversing that. It’s much easier now to get certain criminal records expunged.” He also helps people who have issues with their driver’s licenses. 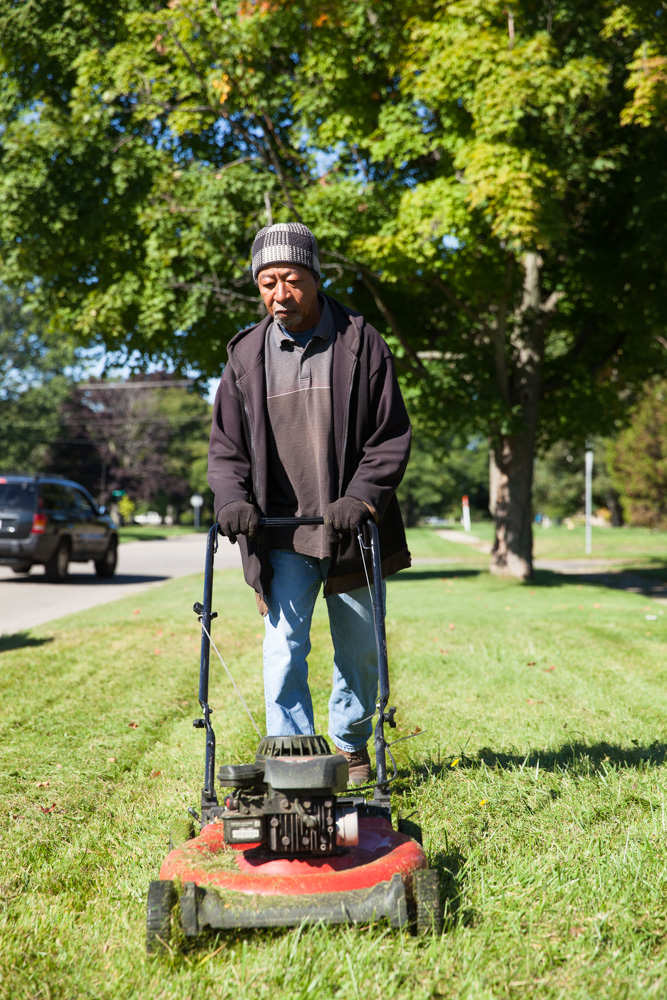 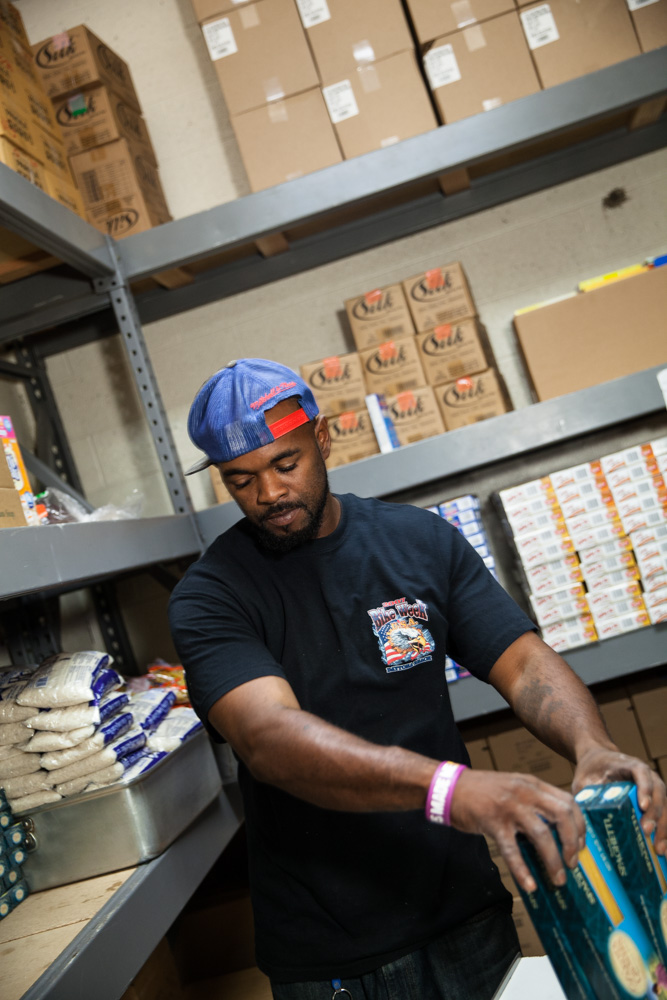 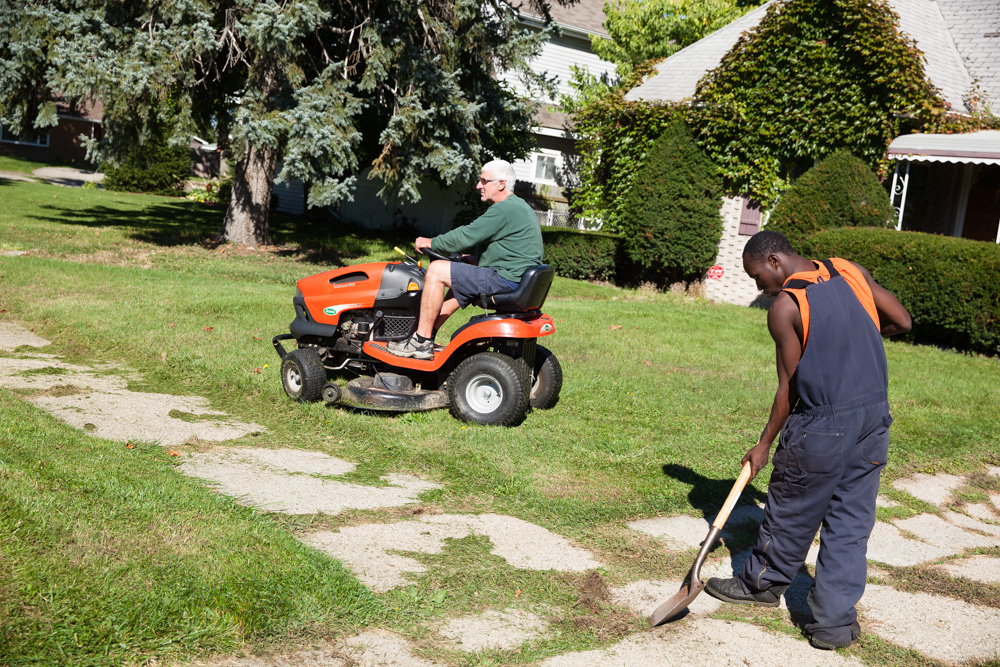 What’s the most exciting news from N.E.W. Life? On the day of the interview with My City Magazine, Sister Carol and Sister Judy were excited about their upcoming trip to Washington, D.C. to see Pope Francis. Also going on the excursion were some staff who had gone through the Center’s program – Jarius Montgomery and Antonio McNeal – some board of directors members, priests, donors and Center supporters.

“What Pope Frances is saying is very much what we are doing,” says Sister Judy. And it will be more of a pilgrimage, adds Sister Carol, as they will also visit places such as the United States Holocaust Memorial Museum, and hold vespers at the Washington Monument. “I’ll never get to Rome, so this is an opportunity not to be missed,” says Sister Judy, “and I am so thrilled to be part of the excitement.”

“They have earned it,” says Tim.