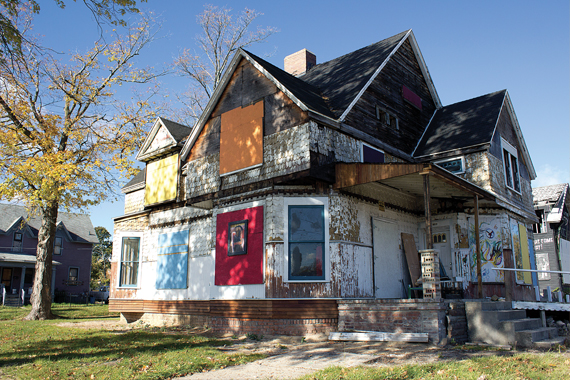 Flint, here is your chance to become familiar with and possibly assist with the completion of a city project dedicated to local art.

In May of 2012, Matthieu Bain and Andrew Perkins, students of the University of Buffalo, were presenting their thesis from inside a house they had purchased for $800 with the intention of re-purposing it for community use. With a few thousand dollars – just enough to give the public an idea of their future plans – and with a lot of work, their thesis was finished, but their journey had just begun. Stephen Zacks of the Flint Public Art Project was in attendance the night of their thesis presentation; Zacks was so inspired that he approached the two with an offer to come to Flint and duplicate their work.

Around that time back in Flint, Zacks inherited the old Spencer’s Mortuary and was charged by the head of the Carriage Town Historic Neighborhood Association with making use of the building. Zacks says that he later “invited Andrew and Matthieu to come to Flint and use their Buffalo method to re-purpose the house, and to do it in a sustainable way that wouldn’t normally be done.” The idea: make the former mortuary into a place to house local art and small events with the ultimate purpose of “serving the community and preserving the structure.”

Enter Bain and Perkins, who came to town last fall ready to get things underway. They acquired the house directly across the street from the former mortuary as their living quarters and immediately started getting the word out. They were presenters at the inaugural Flint Soup dinner, and although they did not walk away with monetary support for their project that night, this has not been the story since. A recent Kickstarter promotion drew the support of over 100 backers, including local filmmaker Michael Moore, and Academy Award winner Susan Sarandon, garnering a total of $12,000 for the project. Along with the latest Kickstarter cash infusion, the effort has also been graced with supplies such as paint from Benjamin Moore, after winning the popular vote in a recent city revitalization contest.

In speaking on the potential of the house’s impact on our culture, Perkins tells My City Magazine that he wants the project “to get people to reconsider how they go about doing things and how they value things,” and for people to “think more deeply about what they are doing every single day.” Perkins has been turning over Spencer’s House by his own hand as of late, as marriage called Bain back to his home state of New York; thus, Perkins took the helm and has coordinated donations and volunteer help over the past year. As a jack-of-all-trades, Perkins has taught himself several building techniques, and has put forth a major effort to get the house through its stages of development almost independently. The occasional help of additional independent workers afforded through grant money and volunteer help from Metro Flint Youthbuild and students from the University of Michigan – Ann Arbor has been a boon, stimulating Perkins’ drive to meet his goals.

At present, the inside of the house is not quite functional, but some public spaces are. Unlike the Buffalo house, Spencer’s House will be a fully functional facility for public use and not just a hypothetical example created for a thesis. This will require about another year’s time and possibly another fundraiser or two, but the team is not discouraged even though funding is “a month-to-month thing,” says Perkins.

Spencer’s House can be found on Facebook. Don’t hesitate to look it up and support the cause if you reckon it something that should come alive in Flint.

Are you interested in purchasing photos from this story? Go HERE and select the “Spencer’s House” category.