Those who’ve only passed by St. Paul’s Episcopal Church in Downtown Flint don’t know that the cathedral holds a trifecta of musical treasures: a heavenly organ, an accomplished organist, and a special concert series that brings in talent from around the world. 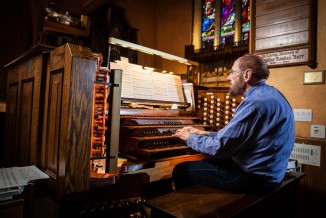 The Florence Whiting Dalton Memorial Pipe Organ is built into the very walls of St. Paul’s sanctuary. “We joke that the builder couldn’t decide where to put the organ so he just put it everywhere,” chuckled G. Donald Kaye, the church’s former full-time organist. The tradition of organ music at St. Paul’s is so old, it predates the church building: the congregation had an organ even before completing its S. Saginaw Street structure in 1873. Over the years, organs came and went as they fell into disrepair and as the accepted tonality of the instrument changed. At one time, the church owned a Skinner organ and an Aeolian-Skinner organ, both very famous. It was the Aeolian-Skinner instrument, installed in 1940 thanks to a gift from Florence W. Dalton, which was first named after her. The idea for the world-famous instrument now entwined within the church was conceived in 1979. With donors that included the usual suspects (Motts, Dorts, etc.) enough funds were raised to complete the organ by 1984. Still named in Mrs. Dalton’s honor, the current organ boasts four manuals (keyboards) and 89 ranks, which amounts to over 4,600 individual pipes – some of which are preserved from the earlier organs – and is the largest in the area. “The instrument’s design utilizes the sanctuary’s marvelous acoustics, resulting in one of the finest organs in the nation,” said Kaye proudly. 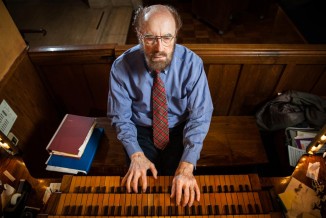 The organ isn’t St. Paul’s only musical treasure. Donald Kaye is a renowned organist whose career highlights include a Masters of Science in Organ Performance from Juilliard, studying at the Royal School of Church Music in London, England, and directing the Music at St. Paul’s concert series. He was Dean of the Flint Chapter of the American Guild of Organists, and a member of the Association of Anglican Musicians and the Royal School of 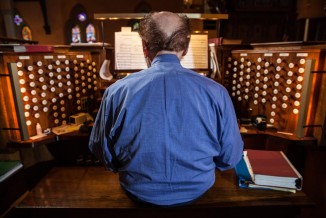 “I was always a church kid,” Kaye said of his childhood in New York City, “and growing up in the Roman Catholic Church, I participated in choir. I loved music, particularly church music, from a young age. On any given Sunday in the city, there were a multitude of divine concerts to choose from. Growing up there was the equivalent of being born with a silver spoon in your mouth if you value organ and choral music. There are so many beautiful instruments there, and I loved them from a young age.” Kaye received his undergraduate degree in Piano Performance from the Manhattan School of Music, but found himself enraptured by the organ. After studying under Vernon de Tar at Juilliard, Kaye became resident organist first for a Methodist church in Tennessee and later for a Presbyterian church in Pennsylvania. He heard of the opening for an organist at St. Paul’s while performing at the Court Street Methodist Church in Flint over Valentine’s Day in 1981. “The installation of the grand cathedral organ had just begun,” Kaye remembered. “I decided on a friend’s suggestion to apply, and I got the job as organist. The prospect of the new organ was very enticing to me then, and it remains a big part of the reason why I remain in Flint.”

After 22 years as organist and choir director, Donald retired in 2003, although it’s questionable whether or not he understands that term since he is still teaching at both the University of Michigan and the Flint Institute of Music while directing the Music at St. Paul’s concert series and filling in as interim organist for the church while they look for a new rector. “My wife and I lead a lovely life here in Flint,” Kaye said of his situation. “We enjoy a lovely home in the city, I have the privilege of playing one of the best pipe organs in the world, and I get to teach what I love.” 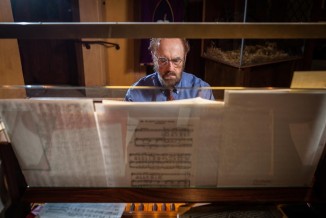 When the Florence Whiting Dalton Memorial Pipe Organ was completed in 1984, the dedication ceremony for this grand instrument was fittingly graced by Dame Gillian Weir, “one of the world’s most outstanding organists,” as Kaye described her. Afterward, Donald began receiving requests from organists to play on the instrument. “The Music at St. Paul’s Concert Series really began as a series of organ recitals,” he said, adding, “we felt that to whom much has been given – we have this stunning organ – much is expected.” Not wanting the organ to sit unused or unknown, Kaye worked with Dr. Robert Glasgow of the Organ Department at the University of Michigan in Ann Arbor to bring performers to St. Paul’s. “As often happens,” he remembered, “we began to vary the concerts with different instrumentalists: harpists, singers, guitarists, etc.” As the series grew in popularity, more musicians heard about it and began requesting to perform. Today, thanks to the caliber of musicians performing at the concert, as well as the Friends of Music at St. Paul’s donor list, the concert series has grown to become one of the city’s most unique musical programs. ♦