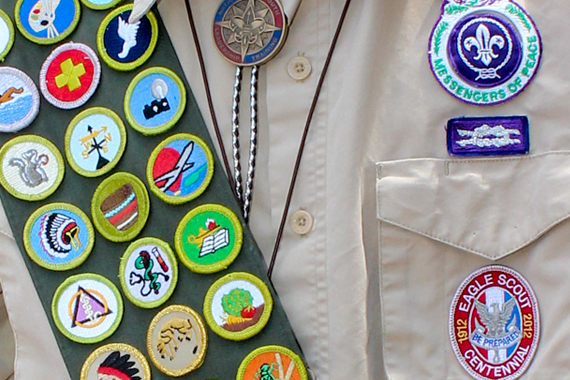 Last December, the 14-year-old Fenton High School freshman obtained the rank of Eagle Scout; moreover, he is now tied with one other young man for the high honor of being the nation’s most decorated Boy Scout. He is one of 12 scouts to earn 135 merit badges, the highest number ever in the Boy Scouts of America’s 103-year history, and much more than the 21-badge requirement. This is not an easy feat, especially at his young age, says his father, Jeff Trecha. Statistics indicate that the average age of those who obtain the Eagle Scout rank is 17. “John earned 50 badges in his first year alone!” exclaimed Jeff. “That’s unheard of!”

In July, My City Magazine had the opportunity to visit with John and his parents, Jeff and Amy, at their beautiful Fenton Township home. He has three siblings: Parker, 13, and twins Briana and Bradley, 11. In becoming an Eagle Scout, John is just following the footsteps of many family members. His father is an Eagle Scout, along with four uncles and a cousin. “There are seven of us altogether,” boasted Jeff. In fact, John’s brothers are also well on their way to becoming Eagle Scouts.

Just what does achieving this distinction entail? Along with a lot of self-discipline, time commitment and a supportive family, there are rigorous requirements a scout must fulfill that are intended to mature a boy into a man. The Boy Scout must progress through the ranks of Tenderfoot, Second Class, First Class, Star, Life and Eagle; earn 21 required merit badges; serve in a troop leadership position; plan, develop and give leadership to a service project; take part in a Scoutmaster Conference, and successfully complete an Eagle Scout Board of Review. For his service project, John organized and played a leadership role in building a prayer area at the Trecha family’s church, St. John the Baptist Catholic Church in Howell. “A lot of work goes into earning these badges,” his mother smiled. “It’s quite amazing.”

Duty to God, service to others, service to the community, and leadership are traits especially important in the Eagle Scout tradition, and John exemplifies them all. He stands straight and tall and greets you with a warm smile and a solid handshake. He proudly wears his scout uniform and a sash that displays his hard-earned merit badges. “I worked every day for two and a half years on this,” he boasts, “and I couldn’t have done it without the support of my family.”

Some badge requirements can be completed in a few hours, but some take up to three months of hard work. John says that the merit badge for Water Sports was one of the most difficult to earn. The family vacationed in Missouri and John had just one week to learn how to water ski. “I never saw a kid so determined,” laughed his father. John would get up on the skis and then, SMACK! Again and again he was dunked in the water. “But after four days, it finally clicked and he got it!” Jeff continued. John also liked working on the Wilderness Survival merit badge, for which he and another scout had to “wing it” in the forest for a night and build a shelter with only the resources they could find in the woods. “It was kind of like Survivor,” laughed John. It took three months for him to earn a merit badge in Athletics, and he put in countless hours to earn the SCUBA Diving badge and actually became a certified diver.

John’s thoughts on his Merit Badges:

Coolest: Chemistry
Most difficult: Water Sports
Most challenging: Fly Fishing
One I’d NEVER do again: Coin Collecting
One that will help me most in life: Lifesaving
Spent the most time on: Bugling
Scared me the most: Shotgun Shooting
My No. 1 overall: Law

John’s achievements were recently recognized by the Fenton Township Board of Trustees. He, along with fellow scouts of Troop 219 attended a board of directors’ meeting, during which a resolution was passed in his honor.

With so much accomplished in his young life, where does John go from here? Along with his goal of continuing to be a Straight A student, he will play a leadership role with his troop until he is 18, helping other scouts to succeed. The troop does a lot of community service work, such as their recent help with the pancake breakfast at Fenton’s Fourth of July celebration and participation in the parade. “There is still a lot I can do with the Boy Scout troop,” he says, noting with a gleam in his eye that the Boy Scouts of America is in the process of establishing nine more merit badges. He also joined Venturing Crew 422, a scouting program for young men between the ages of 14-21 that works on environmentally focused activities.

Having taken an interest in law while working on a merit badge, John’s goal is to become a lawyer. He also feels that the skills he’s acquired along his journey to becoming the nation’s most decorated scout will serve him for the rest of his life. “Scouting has become a way of life for me,” he said. “Scouting defines who I am.”

Are you interested in purchasing photos from this story? Go HERE and select the “Eagle Scout” category.