Sweet memories from the past. When looking back at downtown Flint, Smith Bridgman’s Department Store evokes fond memories for many people – special lunches in the restaurant, people-watching from the mezzanine, buying a wedding gown and riding an escalator for the first time. It evokes memories of magical Christmas window displays and sitting on Santa’s lap.

Smith Bridgman’s has been reported to be America’s oldest department store on its original site. The beloved establishment opened in 1862 and was co-founded by William Smith and F.W. Judd. It was originally called William L. Smith & Co., and was housed on the Brockway Block on South Saginaw Street for 118 years. In 1871, Charles Bridgman became a partner and it was named Smith, Bridgman & Co. William Smith was said to be the first person to use plate glass in show windows. In 1907, the business was incorporated and as a result, was remodeled and expanded.

In 1956, the store underwent a $2 million dollar expansion with the addition of a restaurant, escalators and the completion of the seventh story. The eighth floor was added later and housed the store offices. The Charles Stewart Mott Foundation eventually purchased the department store. In 1962, a huge anniversary celebration was held. Smith Bridgman’s was purchased by Glenn R. Jackson and as the economy declined, the store eventually went bankrupt, closing in 1980. The building was demolished in 1984 and while the structure may be gone, many remembrances remain. 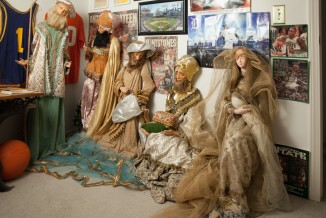 Judy Durant of Fenton bought her wedding gown at Smith B’s and has many fond memories of the store. What she remembers most about that purchase is the experience itself. The Bridal Salon was upstairs and brides-to-be didn’t just search through rack of gowns. “They would bring the dresses to you and you would try them on,” she remembers. She chose the first or second one she tried on – a floor-length sheath of bridal satin with re-embroidered Alençon lace appliqués, a scoop neckline and high-rise waistline with a detachable Watteau train. She remembers the details because, back then, a description of the bride’s gown was included in the wedding announcement. “The dress cost a whole $100,” Judy laughs, “but it was a whole lot of money to me at the time.”

Judy’s mother-in-law, Evelyn Smiley, worked at Smith B’s hosiery counter for many years. As a child, Judy remembers what a big deal it was to take the bus downtown to go shopping. “It was quite the time.” Her first child was born while her husband, Harold, was serving our country in Vietnam. She had photos of their son taken at Smith Bridgman’s to send to her husband. One of Judy’s most striking memories is getting a picture taken with Santa; she still has one that was taken of her and her brother, Bobby, with the Smith B’s Santa in 1950, when she was three years old. “We would stand in line in great anticipation to see Santa,” she says. “The decorations and the window displays turned the store into a magical fairyland.”

“We all believed that the Santa at Smith Bridgman’s was the ‘real’ Santa Claus,” says Alan Houtaling, the Archeology Consultant at Sloan Museum and a collector of many things. Over the years, he has collected memorabilia from Smith B’s, including the Christmas Nativity Scene. While he was an undergraduate student at University of Michigan, Alan worked for a couple years as assistant manager on the fifth floor, where linens, towels and sheets were sold. “All of which I knew nothing about,” he laughs. Alan credits his success there to the salesladies who were very knowledgeable about the merchandise. There, he met his first wife, Debbie Beebe, who worked on the main floor.

Alan also has many tender memories about visiting the store. As a youngster, he was always excited when his mom would say, “We’re going downtown to Smith Bridgman’s.” He remembers the day he was old enough to ride the bus downtown and go to the store alone. He would go to the restaurant to eat; having heard that President Kennedy liked eating a Braunschweiger sandwich and coleslaw, that is what he ordered. “It was the first and last time I ate a Braunschweiger sandwich,” he laughs. He loved sitting next to the glass wall in the restaurant. “I would watch people go up and down the escalators,” he says.

His favorite memory, however, is the sense of community pride for the store. “It was a cut above the rest,” he says. “It was a landmark.” He recalls the day the store was demolished and how much trouble the workers had bringing it down. “It was a grand old store.”