For many years, Shelley Spivack has been an advocate in the legal system for children and their families. Recently, Voices for Children Advocacy Center recognized her dedication with a special award – the Roy E. Patterson Caring Adult Award – sponsored by Hurley Medical Center. The honor is given to adults who go beyond the call of duty to provide services for youth in Genesee County.

The Caring Adult Award is just one of the numerous awards that were presented at an event held in March at the Riverfront Banquet Center in Downtown Flint. The Children’s Champion Awards Breakfast raises funds for the Voices for Children Advocacy Center. “It was extremely gratifying to receive this award and be recognized for the work I have done to improve the lives of kids in Genesee County,” says Spivack.

Originally from New Jersey, Spivack attended Rutgers University in New Brunswick, NJ and Brooklyn Law School in New York. She came to Flint in 1980 to work for Legal Services of Eastern Michigan. As an attorney, Spivack worked in the juvenile justice system for many years. She was a Family Court Referee for 18 years and retired two years ago. She is also a lecturer at the University of Michigan-Flint. 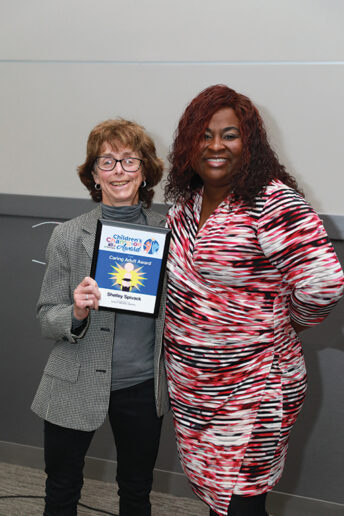 In 2011, Spivack saw a request from the Ruth Mott Foundation for a grant to establish a program to share art with under-served communities. In partnership with Buckham Fine Arts Project, she put together a 12-week youth art pilot program that offered weekly visual arts and spoken word poetry workshops for youth detained at the Genesee Valley Regional Center (now called the Genesee County Juvenile Justice Center). At the time, she was not only familiar with the needs of kids in detention centers, but was also an artist member of Buckham Gallery. “It sparked a light in my head to take the knowledge and expertise of Buckham Gallery artists and pair it with the needs of kids in the juvenile detention center,” she shares.

Spivack continued to get grants to extend the project. In 2018, she formed the nonprofit organization, Youth Arts: UNLOCKED, which brings artists and arts workshops to justice-involved youth in Flint and Genesee County. The goal is to introduce artistic concepts and techniques as a means of connecting, expressing, learning and discovery. The nonprofit offers visual arts, dance, theater, spoken word poetry and a yoga workshop. “It took a long time to get there,” Spivack says. “Both my work as an attorney and as a family court referee spurred my work with Youth Arts: UNLOCKED.”

When Spivack attended the Children’s Champions breakfast, she had no idea that she was getting an award and she doesn’t know who nominated her for it. “All of a sudden, they called my name!” she exclaims. “I would like to thank Voices for Children for doing this event and bestowing me with the award.”

“It was extremely gratifying to receive this award and be recognized for the work I have done to improve the lives of kids in Genesee County.”