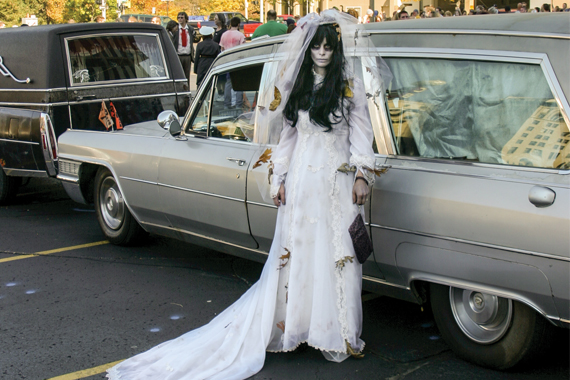 For all you fans of the walking dead, Flint Zombie Walk is at it again!

The annual Zombie Walk is returning to Downtown Flint for its fifth year on October 5 from 11am-4pm. The event is the brainchild of Flint resident Kristina Lakey, who was working in public relations for the Flint City Theater when she came up with the idea. At the time, zombie walks were becoming popular in other areas of the country in celebration of World Zombie Day, when cities around the world hold zombie festivals and collect donations for their local food banks or other chosen charity. “It’s a unique way to raise charitable funds in the Flint area,” Lakey said. In the first year, about 75 people participated in the Flint Zombie Walk and it has become more popular each year.

According to Kristina, Flint’s Zombie Walk is a combination of community, charity and horror. The event features celebrities, vendors, entertainment, prizes, and of course, zombies of all shapes and sizes shambling down S. Saginaw Street. This year’s celebrity guests include Alex Vincent of Child’s Play and Child’s Play 2, Jim Krut of Dawn of the Dead, William Ragsdale from Fright Night, and John Tenney from Realm of the Weird. “It’s so much fun for such a good cause!” Kristina exclaimed. Funds raised during this year’s walk will benefit edible flint and the Genesee County Humane Society. Satouri Circus will be the emcee of this year’s event, and there will be special performances and vendors, including a zombie makeup application site hosted by FACE FORGE, available on a first-come, first-served basis!

Just why are so many people fascinated by zombies? “People just like being scared!” Kristina laughed. And many of the participants enjoy dressing up, putting on makeup and being transformed into scary-looking zombies. So drag out your best zombie duds and come Downtown for some fun October 5. Make new friends, help out the community, and enjoy one of mid-Michigan’s premier horror-lover events!