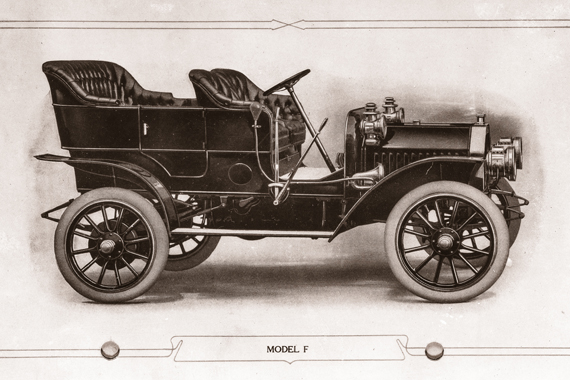 Billy Durant’s start in the automotive business in 1904 mirrored to a strange degree his start in the carriage business 18 years prior. At the turn of the century, Durant was known as the “King of Carriage Makers”; he would soon become the king of the motorcar.

A struggling car company by the name of Buick, its new owner James Whiting, and the city of Flint were in need of Durant’s business sense, endless energy and salesmanship when they called him to take a ride in the Buick Model B in 1904. Billy had been in New York for several years by this time, and had ignored warnings that, even though the carriage business was booming, it would soon be eclipsed by a new invention: the horse-less carriage. One of these warnings had come from A.B.C Hardy—general manager for the Durant-Dort Carriage Co.—who left Billy’s company to start producing automobiles on his own. Flint’s citizens had experienced Hardy’s failed attempt to bring automobile production to the city in 1902 and 1903, and they were especially eager to prevent another failure in 1904 in order to retain their title of “Vehicle City.” After months of putting the Buick Model B through terrain tests in the Michigan countryside, Billy decided that the car was a great product, and he took over the Buick Motor Company.

Much like the first showing of his carriage in 1886, Durant took a Model B to the New York Automobile Show in 1905 and returned home with more orders than he could possibly fill. Just as before, however, Durant’s pertinacious work ethic and vision spurred him to create a successful corporation that would come to define the automotive industry. Billy bought 220 acres of property just north of Flint and turned it into the world’s largest automobile plant. He also applied the concept of vertical integration, which he had developed in the carriage business, to the Buick Motor Company; Durant even convinced his axle supplier—Charles Stewart Mott—to relocate to Flint from New York in order to more closely control the production of the Model B’s components. William Pelfrey, author of Billy, Alfred and General Motors states, “By the spring of 1908, less than four years after Durant’s arrival on the scene … the plants were running twenty-four hours a day, with three labor shifts, pumping out more cars in just one day than Buick had in the entire year of 1904.”

Durant’s vision in 1908 soon changed from merely being ahead of his competition in the auto business to controlling what he called “the greatest industry in this country.” The key to accomplishing this goal was merging current competitors into larger companies more able to dominate the emerging market. After several deals fell through, Billy created a holding company called General Motors Company that was comprised of only two car manufacturing entities: Buick, the most successful auto producer in the country, and Oldsmobile, which was nearly bankrupt. How is it possible, then, that in the first year after Durant bought Oldsmobile it was turning a profit? Simple. Durant brought a successful Buick Model over to the Oldsmobile plant, modified the body and gave it the classic Oldsmobile look, and sold it as the “new” Oldsmobile. Instead of wasting valuable time and capital designing a completely new car, he built the new car on another car’s platform: an industry first. This method of shared components and incremental design would become standard in the years to come.

General Motors continued to grow at a rapid rate, thanks to Billy’s tireless salesmanship, acquiring more and more companies. The coup d’état was the famous car company Cadillac, which had astounded critics with its unprecedented precision and interchangeability of parts. In one test, three of the same model of Cadillac were disassembled, the parts scrambled, and then reassembled by a different mechanical crew, and all three reassembled cars drove perfectly on a test track.

In his quest to spread the General Motors umbrella over the auto industry, Durant even tried to buy the Ford Motor Company, but negotiations fell through when he could not get sufficient financing. Durant did not limit his sights to the acquisition of companies that built cars; he bought suppliers of any part that went into the production of a General Motors car. One of these suppliers was a man who was producing higher-quality spark plugs than General Motors’. Durant relocated Alfred Champion to Flint, and created a new GM division: AC Spark Plug.

These and numerous other acquisitions—some profitable and others disastrous—may beg the question: How did General Motors ever survive its tumultuous beginning? In point of fact, it didn’t. The early years of the 20th century were a time of wild undulations in the burgeoning stock market, with little government regulation to prevent the speculation that was rampant. During the panic of 1911, Durant lost control of General Motors when its debts were called in and he was forced to ask the big banks in New York for a bailout. The bank took over and began restructuring the massive conglomeration, removing Durant as president and owner of the company.

Durant wasn’t done yet, however, and his comeback establishes him as one of the most determined and indefatigable dreamers of the automobile era, though his name has gathered a layer of dust in the annals of history.