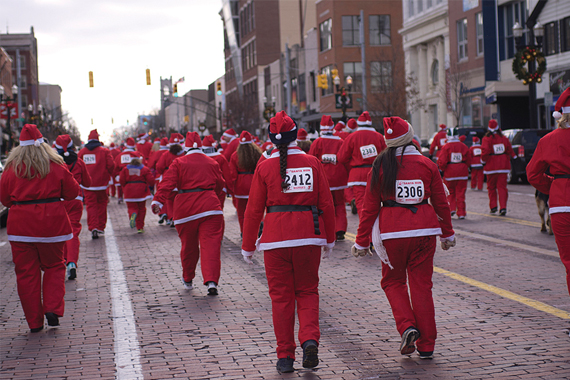 Ho! Ho! Ho! Merry Christmas! It was a stunning sight to see approximately 2,000 Santas in Downtown Flint on Saturday, December 7 at the YMCA of Greater Flint’s fourth-annual Santa Run. The sun was shining brightly, making it a little easier to bear the bone-chilling cold. But that did not stop families and runners from participating in the 5k and 1 mile walk/run. According to Janet Tweddle, the Chief Operating Officer of the YMCA of Greater Flint, the family-friendly event supplies a five-piece Santa suit to all participants. “That way, everyone who runs is dressed as Santa,” she laughed.

The idea of the event came about after a board member saw a similar race/run in Las Vegas, Janet explained. Numerous non-profit organizations and groups of friends participate each year, along with many families, some with kids being pushed in strollers. Even dogs are dressed in holiday costume! The cold ensured that participants enjoyed the warming tent and the hot coffee this year, and pooches were treated to dog treats and water.

Proceeds from the event are used for the YMCA’s Partner with Youth Campaign, and Janet mentioned gratefully that the support of Al Serra Auto Plaza is important to its success. The YMCA partnered with the Downtown Development Authority and the city’s annual Holiday Parade took place following the race.

Are you interested in purchasing photos from this story? Go HERE and select the “Santa Run” or “Flint Holiday Parade” category.