Beginning her acting career at age nine as a talking refrigerator, Sarah Sullivan continued her career on and behind the stage with Flint Youth Theatre. There, Sullivan found that she was challenged to participate in many different ways besides acting. By the time she graduated from Grand Blanc High School in 2002, she had experience working as a stage manager, light and sound board operator, backstage crew, scene shop, and as a performer. “My work as an artist is deeply influenced by my time working at FYT,” Sullivan says. “Flint Youth Theatre is the first place where I really experienced ensemble-based work, and this is a driving principle of my artistic practice.” 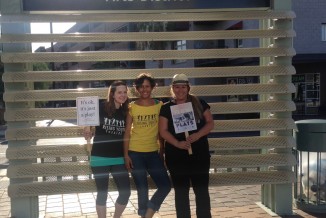 FYT prepared Sullivan for her future in a youth theatre company, with a strong foundation of collaboration and professionalism. “I never really thought about making art as an individual – I would always rather work as a team, alongside smart and creative people,” Sullivan says. “I always want to learn from the people around me. I also think that it gave me a sense of how powerful it is when youth and adults work together as peers, co-learners and collaborators.”

“I think that Flint Youth Theatre gave me a sense of how powerful it is when youth and adults work together as peers, co-learners and collaborators.”

Sullivan began working on theatre productions in middle school, but was soon drawn to the behind-the-scenes crew. “When I was a teenager, I thought I wanted to be a professional actor,” she says, “but when I got to college, I realized pretty early on that it wasn’t for me.” She attended Northwestern University and received her Bachelor of Science in Theatre and English, then went on to Arizona State University and earned a Masters of Fine Arts in Theatre for Youth. This, and her experience with FYT’s collaboration between youth and professional adults, led Sullivan to start Rising Youth Theatre.

In 2008, Sullivan moved from Chicago to Arizona to begin her graduate program at Arizona State University. “At the time, I fully anticipated that I would complete the three-year program and immediately move back to Chicago,” she says. “But the more time I spent in Phoenix, the more I felt connected to the city. The arts and culture community is growing and thriving, and it felt like a place where I could really invest in my community.”

Sullivan and her graduate school colleague, Xanthia Walker, shared an idea about starting a theatre company in Phoenix. “The more we thought about it, the more we realized we wanted to stay where we were and start something in Arizona,” she says. 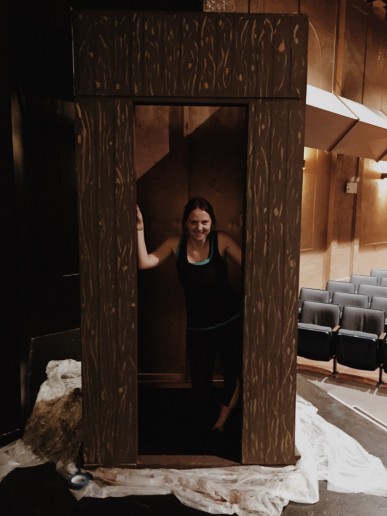 Officially founded in 2011, Sullivan is co-founder and artistic director at Rising Youth Theatre – a professional theatre company that creates socially relevant original plays with young members of the community. Rising Youth Theatre produced their first play in 2012, and since then, they have completed 11 productions and worked with more than 300 youth. They also hold various workshops to explore different performing techniques.

“All of our productions start in the community and work to create a dialogue around topics that have relevance to area young people,” Sullivan says, which she believes is what FYT provided for her when she was growing up. Relevant topics like foster care, high school drop-outs, public transit, and fan culture are only some of the production topics that Rising Youth Theatre pursues.

“I believe that the mission of Rising Youth Theatre and Flint Youth Theatre are  absolutely similar,” Sullivan says. “Both organizations believe that young people deserve to have a voice in the community and believe that art is a vehicle for that voice.” In addition, the theatres are similar in their mentorship model – young students work alongside adults who have more artistic experience.

Rising Youth Theatre has received great recognition in the past couple of years, receiving the Phoenix Mayor’s Arts Award in Theatre in 2012 and the American Alliance for Theatre and Education’s Outstanding New Theatre Company Award in 2014.

“The thing I’m most proud of is that I think we are actually making an impact in the place where we live,” Sullivan shares. This impact is evident through their goal of accessible programming, meaning all of their productions are offered to the public either free of charge or at low-cost. “We also work to produce theatre in non-traditional spaces, helping to ensure that our programming is welcoming to all audiences, not just typical theatre-goers,” she says. 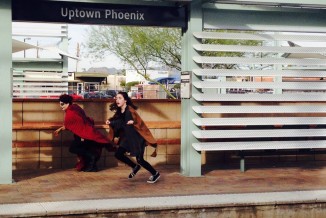 Sullivan and the rest of the Rising Youth Theatre staff are providing the same community engagement that many communities are missing, but that Flint and Phoenix possess – and seem to flourish because of the involvement.

“I think that the way in which FYT embraces risky work, and believes that young artists have the capacity to engage in big, challenging ideas has had a huge impact on me and my work as an artist,” Sullivan says. “This instigated my path toward social justice work through the arts and instilled in me a belief that young people need to be part of challenging, risky and complicated conversations about the world we live in.”

To see more of what Rising Youth Theatre does, you can visit risingyouththeatre.org.