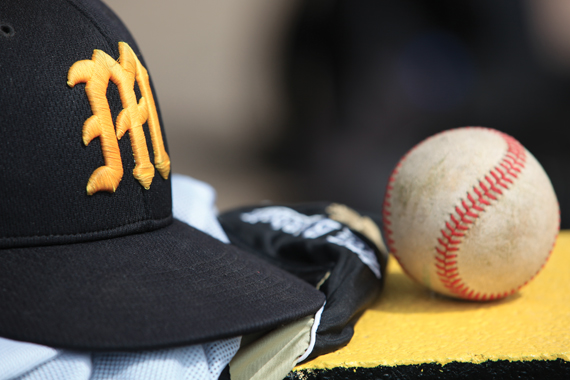 It’s a simple, concise, genuine and undeniably catchy phrase that follows Coach Shawn Brown everywhere. “Yeah, Baby!” is the trademark one-liner of Mott Community College Bears Baseball, a team that has received the best of “Brownie” for the past 20 years.

“Time well spent,” Brown says of those years as he gazes fondly upon his players warming up for a doubleheader at home. Smiling, he looks away, adjusts his right pantleg and scrapes his foot along the red sand of the first-base coach’s box. “Yeah, Baby!” he yells, as the infield twists a double play. It doesn’t take much to reveal Brown for the proud papa bear he is. While his official title is now Athletic Coordinator, Brownie’s duties still include coaching the team he loves alongside head coach Joe Boulton.

Bear Baseball is more than gloves and bats; it’s a vehicle for players to showcase their talents at the collegiate level and earn scholarships to four-year institutions. “We all want to win games,” Brown said. “But seeing guys move on is the real trophy.” Unfortunately, players at junior colleges like MCC typically only receive two years of eligibility; those short years are never enough for Brown, so remaining in constant contact with them after they move on is a necessity. “They’re like my sons,” says Brown, who is an avid memorabilia collector, amassing stocks of team plaques, awards and other mementos from years past.

One such mantelpiece feature pays tribute to Roger Christensen, a 2010 Clio alum. Before graduating from Ohio’s Tiffin University with a degree in business administration – not to mention playing Division II ball for two years – and long before landing a job within Mott’s student financial aid department, Christensen was a star middle infielder for the Bears. As a freshman, he earned the reputation of an elite, leather-flashing second baseman – evidenced by his 2011 Rawlings Gold Glove Award, an honor given to those who don’t make mistakes.

Christensen had multiple college offers before deciding to play with the Bears. “Getting my feet wet, athletically and academically, I thought it was best for me to come here to Mott right away. Coach Brown likes to see his guys move on to the next level, not just in baseball – but in their futures. He enjoys seeing that, and it’s a big part of bringing guys here. They need to realize that it’s not just about baseball. It’s about improving lives.”

Now an assistant coach, Christensen says the choice to join the Bears’ staff was easy. “I always want to grab a bat and I want to go play,” he laughs. “Brownie builds a family here. Taking the job was just coming back home for me.”

Mott Baseball snags athletes from everywhere – Downriver, western Michigan, the Bay Region and places in between, as well as occasional out-of-staters. If they can play, Brownie invites them to test their skills in Flint. The team calls Kearsley Park their home field, and it’s one of the nicest patches of grass you’ll see in Michigan this side of the minors. The “hidden gem” of the community comes complete with all of the trimmings – batting cages, bullpens and even a clubhouse with TVs. A project begun in 1994 as the dream of former coaches Ernie and John Myers, the field was finally finished in 2007. However, there are future renovation plans, including the possible addition of a press box.

Coach Brown goes to great lengths to make each player feel like a member of the family. To that end, the Bears head to ESPN’s Wide World of Sports at Disney World each spring. They play roughly eight games and sight-see, giving them the opportunity to bond. “I’ve made great friends here,” says sophomore pitcher and outfielder Devon Jones. “Being in Flint has taught me that there’s more to life than just living in Wyandotte. It’s good to live in different places. These past two years have been a great experience. Brownie is one of the main reasons why I chose Mott.” In addition to pursuing a degree, Jones will attend Siena Heights University next fall on an athletic scholarship.

Corey Lewandowski’s next stop is Central Michigan University. The 20-year-old sophomore pitcher is eyeing a walk-on spot with the Chips and a degree in accounting/finance. “Mott’s a good stepping stone to get prepared for college life,” says Lewandowski. The Hartland native enjoys living in the College Cultural Neighborhood with Jones and fellow sophomores Chase Krager and Brandon Vittitow, who came to Mott from John Glenn High School in Bangor Twp. Mott works with families of former players, so finding housing is rarely an issue for non-locals. “Getting to live on my own has helped,” Lewandowski adds. “I could have gone to Washtenaw – I could have lived at home and gone to school. But I don’t think that would have prepared me like Mott has.”

Brownie’s coaching style, and more than that, his leadership, stems from his own ball-playing experience. “As a player, I noticed that some guys were left behind,” he remembers. “Coaches didn’t really promote them. I learned from that. It was a killer to watch. Some of the deserving players never get to move on – but I have guys who will forever be trophies for me and this program.” With a coach who treasures every player, every game, and every moment of his career, it’s easy to see why Mott remains a proving ground for great athletes and a place for young men to mature into leaders. Support the great work happening in the outfield, and take your friends out to enjoy a prime example of America’s favorite sport.

See more photos HERE, or purchase photos from this story by going HERE and selecting the “Mott Baseball” category.