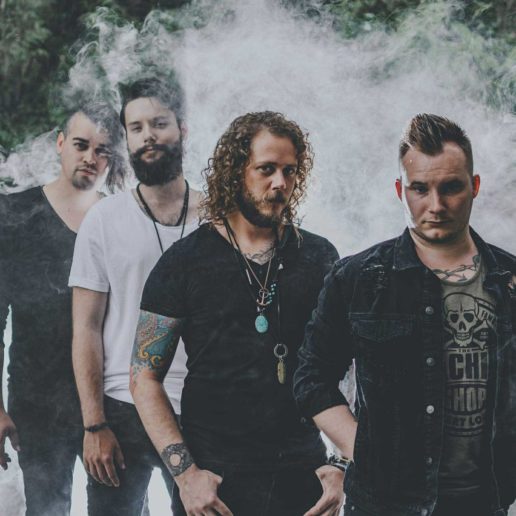 For the last three years, fans of Greater Flint’s music scene have been unanimous in their choice for favorite local band as voted in the MCM City’s Choice Awards. Their pick: Avalon Black. And why not? Their fun, enthusiastic shows, idiosyncratic songwriting and personal camaraderie presents a perfectly balanced rock aesthetic that appeals to anyone with a love of the art; and fans know that when they attend an Avalon Black show, they are getting nothing less than the best. “At the end of the day, it doesn’t really matter where we play or how many we play for, whether it’s thousands or just two people,” says lead singer, Jordan Orvis. “If it’s just two people, well the way we see it, those two people really wanted to be there so we make sure to leave everything on the stage and put on the best show we can.”

While the bluesy, emotive voice of the lead singer, the energetic riffs of lead guitarist Kris Kress and bassist Taylor VonBrockdorff, and the wild fervor of rhythm guitarist Seth Adams put Avalon Black on its path to stardom, the combination of talent took years to finally form. The guys have been friends since they can remember; but for whatever reason, never came together musically all at the same time. “Jordan and I were in a folk band and Kris and I played together for a time,” says VonBrockdorff. “We always hung out together, though.” Orvis echoes, “Most of us had other musical endeavors.” Each continued bouncing from band to band, sometimes connecting in projects, sometimes not – but they remained friends and one day, realized they were missing an opportunity. “We realized that we just kind of do nothing when we are together, so instead, we decided to start playing some cover songs in my basement,” recalls Orvis. “Jordan asked us to learn some songs that he wanted to sing,” adds VonBrockdorff. “We were all going to get together and play them the next week but when we got together, we found out that nobody learned any of the songs except for Jordan.” Kress shares, “That’s true. So, I showed the guys some riffs I’d been working on and suggested that we just write a song together, instead.” The guys got down to business and wrote their first song, “The Ultimate Price.” 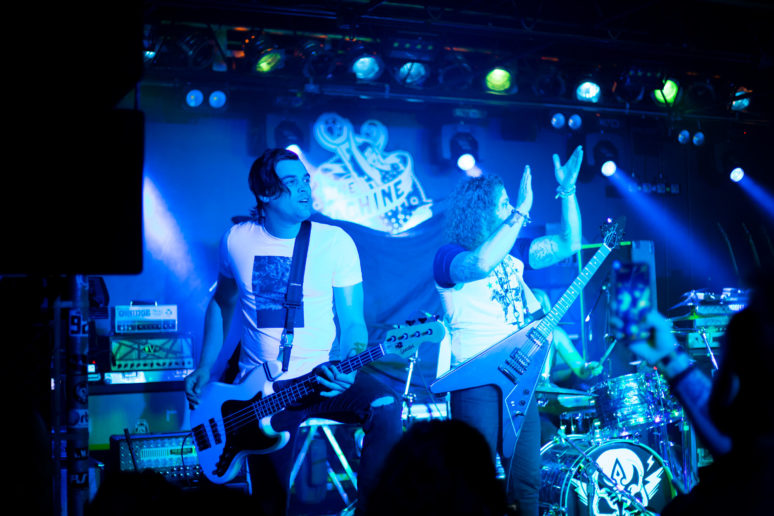 Since then, the band has followed the same creative style for each new song. They write collectively, contributing fresh ideas and individual talent to create music that is equal parts hive mind and distinct personality. “It’s more fun to write that way,” says Orvis. “Everybody is going to have an opinion and we kind of find a balance that works.” Adams agrees, “I would hate for someone to remain silent and then miss out on a great idea.”

Before they really got going, however, the band needed a name. They agonized for months over it until Kress figured it out. “I was watching a show and the name ‘Dorian Gray’ popped up and I thought that it would be a pretty dope band name, but I found out someone else beat us to it,” he recalls. “But I liked the appeal of music associated with a color. Then it came to me, ‘Avalon Black.’ I mean, Avalon is paradise and black is kind of the opposite. It’s upside down. Like a ‘Stranger Things’ sort of thing. I went with it and everyone else did, too.” Orvis adds, “It was the only name we all agreed on. It stuck and honestly, it’s been great.” 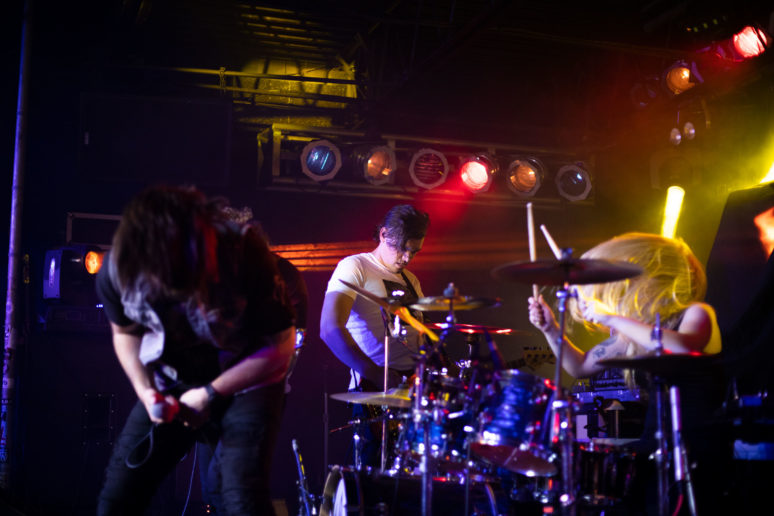 They had the talent and the name but their ambition was nothing more than performing as friends and having fun. The initial plan was to play a few shows here and there and write songs that the band would enjoy playing. That all quickly changed. “Right after that second show when we played with Starset, that’s when our plan changed. People demanded our music,” says Kress. “That’s when we started thinking that we had something. We started to believe that we could maybe do this full time.” In response, they produced the first Avalon Black EP featuring songs “The Ultimate Price,” “Through the Storm,” Hey Darlin” and “Worth and Worthless.” Since then, the band has played all over Michigan, at the iconic House of Blues in Chicago and in numerous sold-out shows with national acts such as Buckcherry, Puddle of Mudd, Pop Evil, Powerman 5000 and others. For three years, the band has been delighting fans and now, they are looking to move forward.

“At the end of the day, it doesn’t really matter where we play or how many we play for, whether it’s thousands or just two people.”
Jordan Orvis

Just last year, they drove to Georgia to work on some songs with a professional musician who has had Top 10 hits with bands such as Three Day’s Grace, Halestorm, All That Remains, and Starset. The songs that came out of that session are a source of extreme excitement for the band and will comprise their next EP. “These new songs are amazing,” says Adams. “My favorite is ‘Wicked Ways’ but really, they are all great. We are doing a lot with these songs. We’re making music videos and promotional art. It’s close.” VonBrockdorff adds, “It’s almost done. The recording is done; it just has to be mastered. We’re being patient with the process. We always ask ourselves, ‘what do the professionals do?’ We want to be, and make music on, a professional level.” Orvis adds, “If you want something done right, you have to invest a ton of time into it. We all work day-jobs and we are fighting through financial and other roadblocks. I understand how the audience feels, though. We hope that when the new music is released it will speak for itself and really get a lot of attention.” Until the new EP is finished, the band is looking to increase touring, increase their geographic footprint, and above all, remain friends. 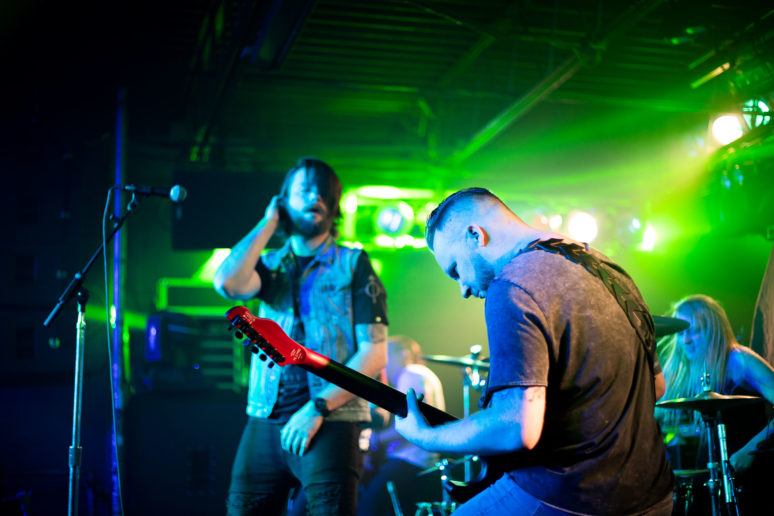 “It’s very easy to lose the friendship dynamic when it suddenly becomes a job,” says VonBrockdorff, but he doesn’t see that happening with this group. “We are always together outside of the band. Jordan and I golf together. Kris and I go to as many concerts as we can. Seth cuts my hair.” When the laughter subsides, Jordan reiterates, “I’ve been playing in groups for a long time and this is the first one that I feel truly comfortable with. I would play anywhere with these guys.” Adams agrees. “I feel like we have already ‘made it’ to some extent. I get to hang out and play music with my best friends and that’s really great.” Kress adds, “Yeah, nothing will make me happier than to be in a van with these guys playing together on tour.” No matter where the music takes them, Avalon Black will be eternally grateful to the city they call home. “For a home base, not a lot of artists are as fortunate as bands in Flint. We get help from all over the community. Everyone here is a friend,” says Orvis. “We get amazing support from Kevin Zink and all the people at the Machine Shop, Robb Klaty and the people at Tenacity Brewing, Joel Rash and all of the other musicians and great people of Flint.” “I mean, we would really like to give a big thanks to our fans and the whole community,” adds Adams. “We’ve had help from professionals like Matt Dirito from Pop Evil and we can’t forget our manager, Nick.” The band appreciates all of the city’s support and will always go out of their way to reciprocate. “Flint needs to keep it up,” says VonBrockdorff. “Businesses and people are thriving. The community is really moving forward and it’s noticeable.” 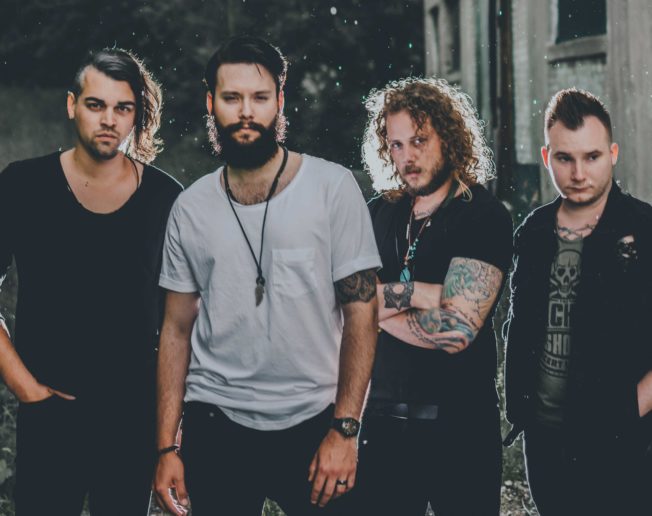 Avalon Black has the talent and drive to make an impact on the national scene, a concept to which many fans will attest. Playing professionally, however, will only be an additional silver lining to what they have already experienced. “I’ll always be proud with all we have done so far,” says Orvis with gratitude. “My dream since I was 14 is to play for 20,000 people; but if that never happens, I won’t be unhappy. All I care about is putting out a song that people enjoy.”

Avalon Black’s music is available on Spotify, Soundcloud and other digital media providers. For upcoming shows and releases, visit the band’s Facebook page. 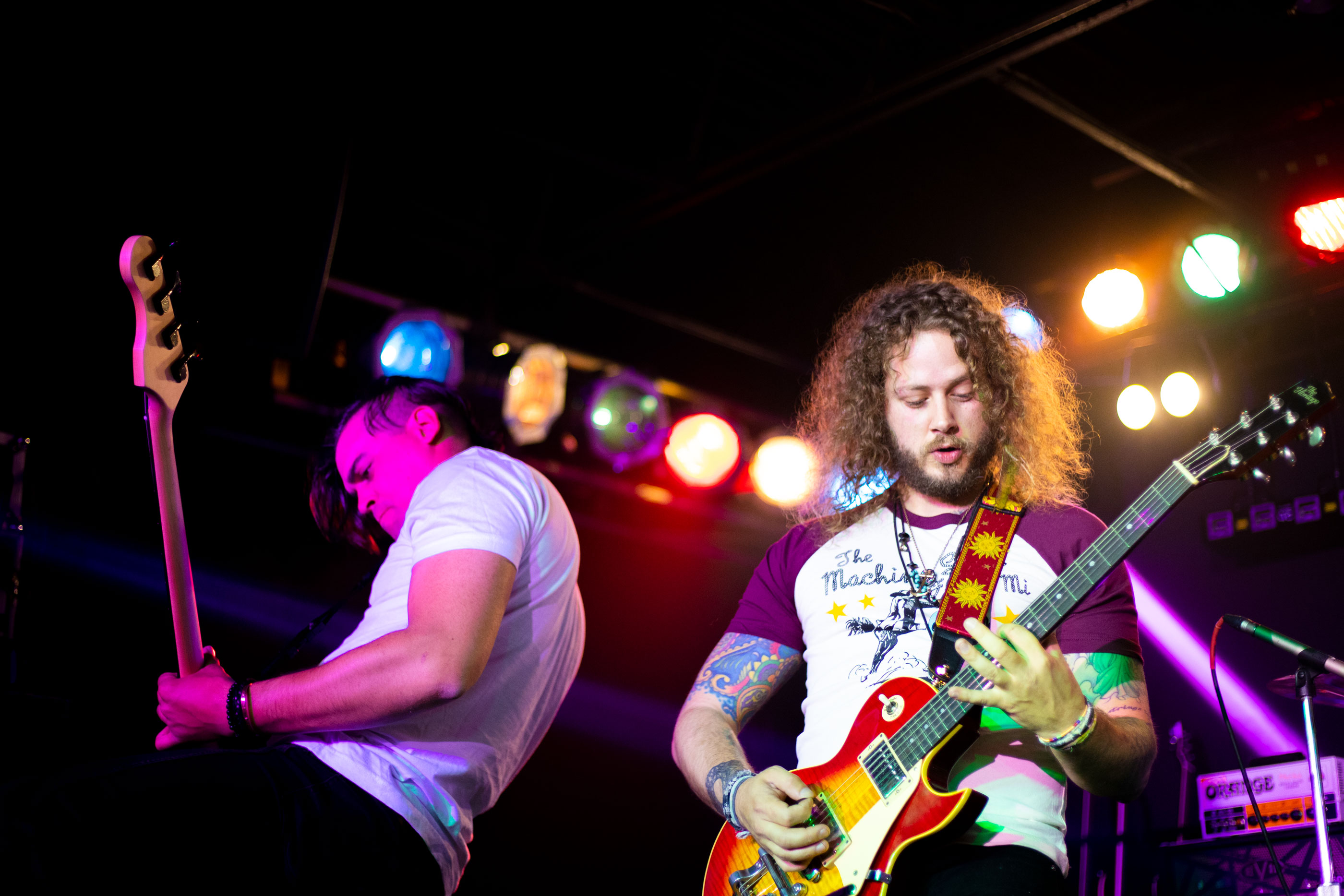 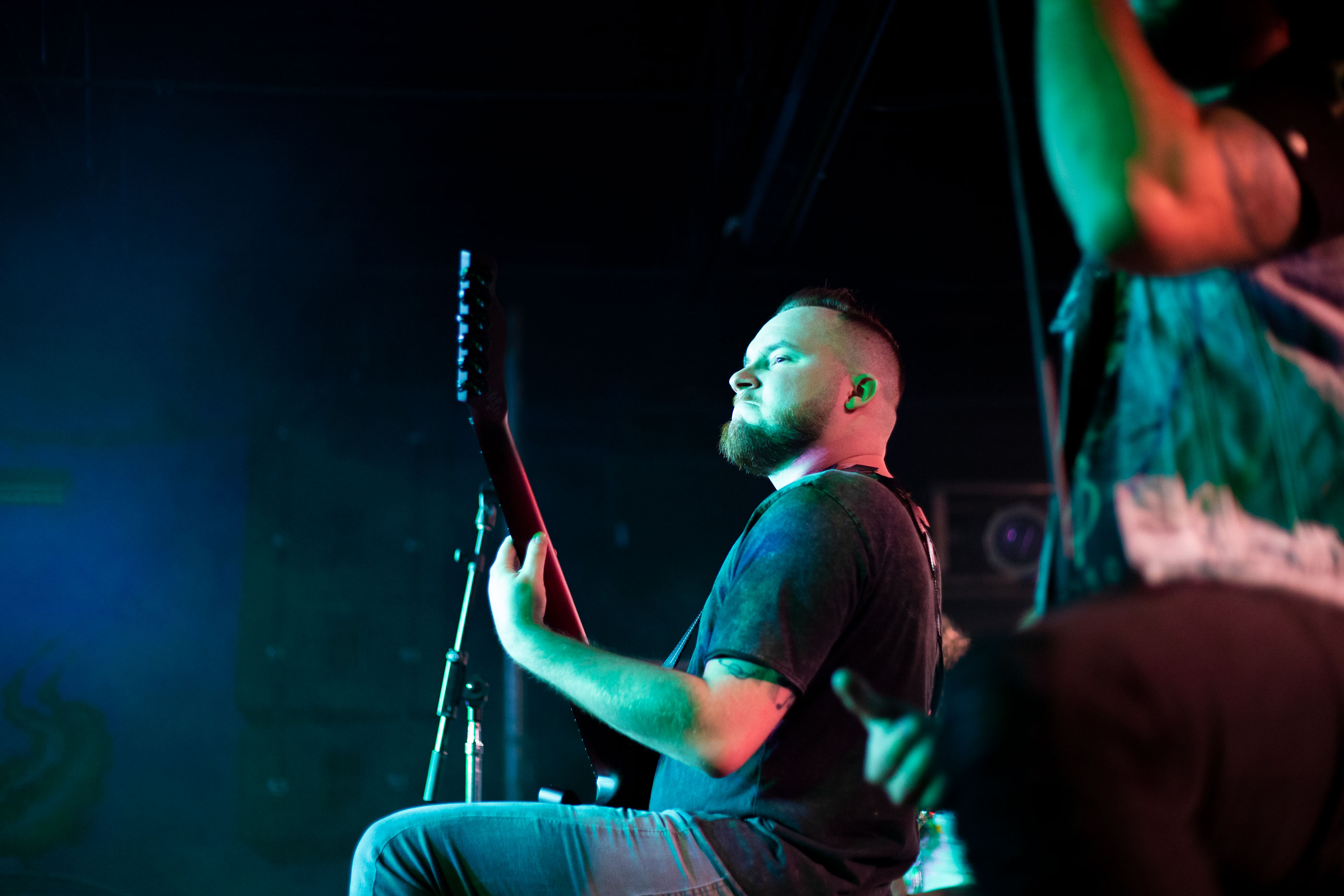 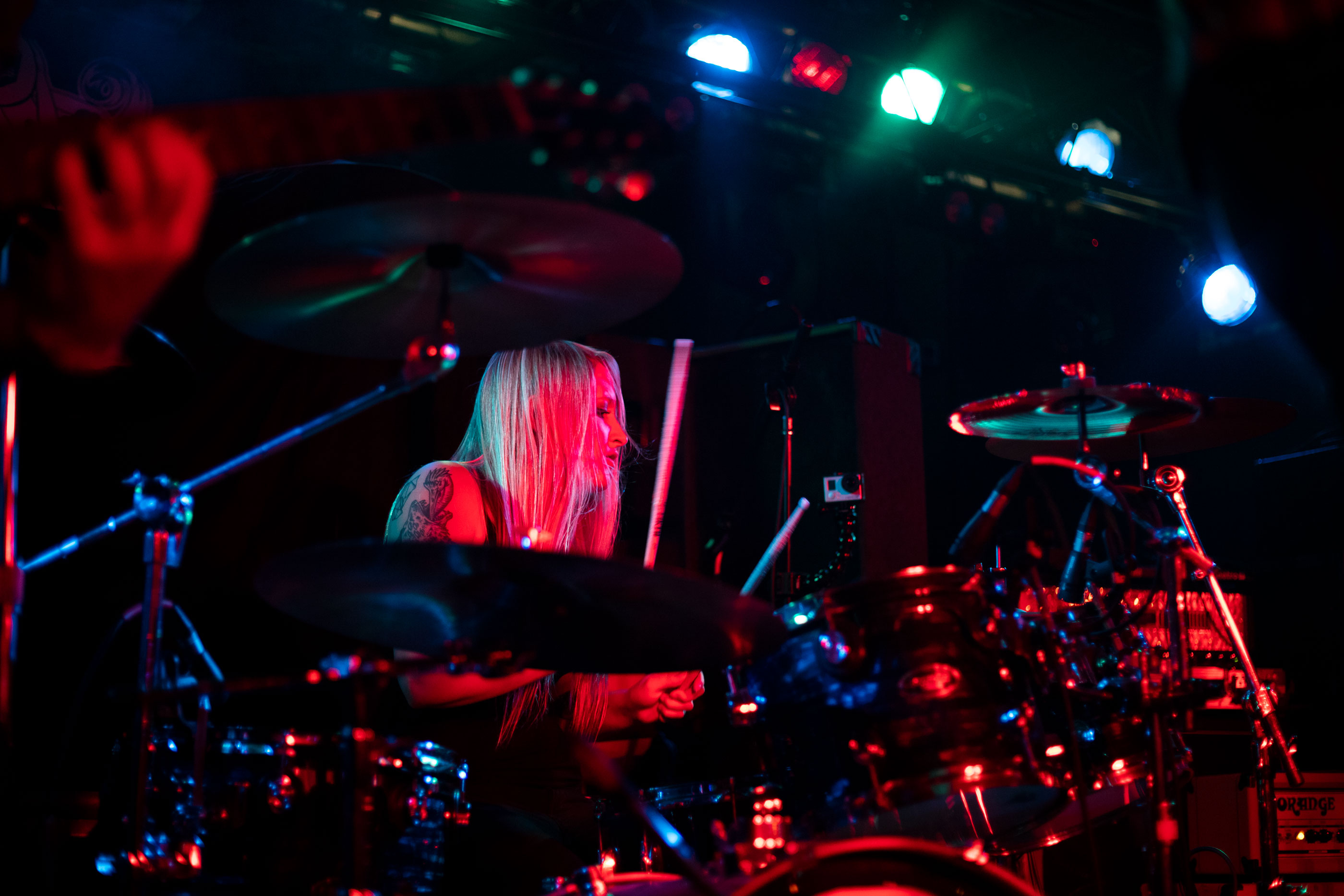 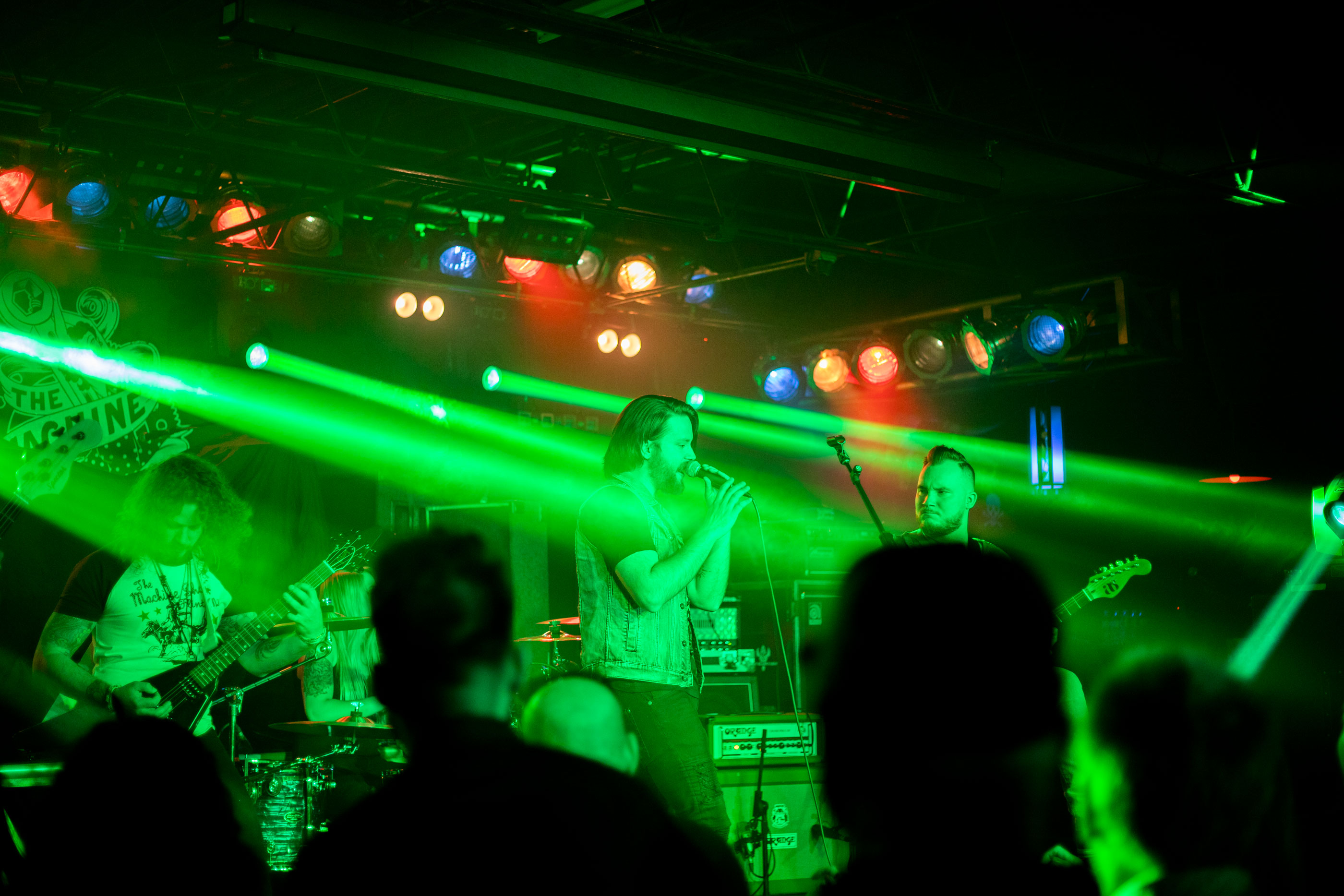 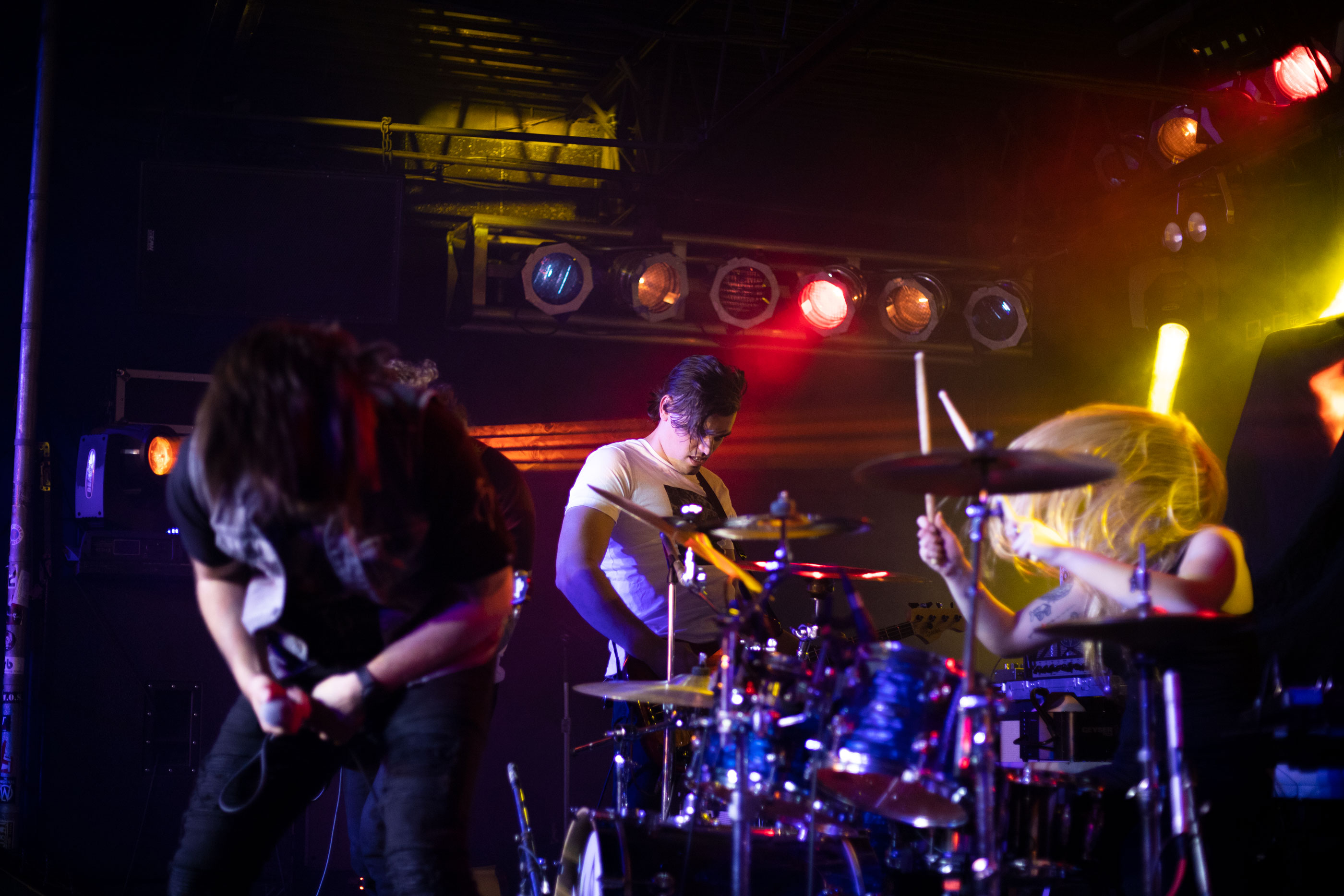 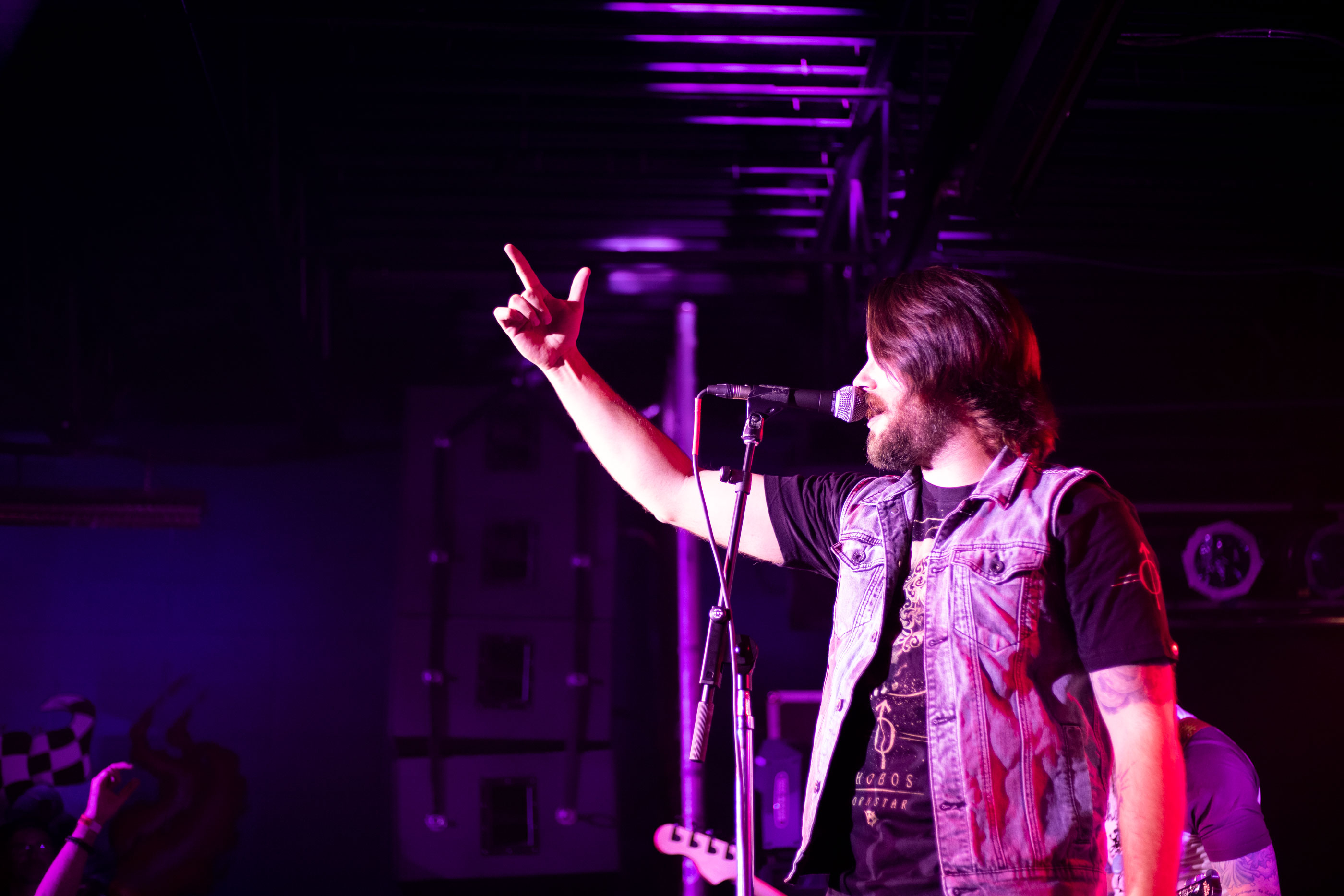 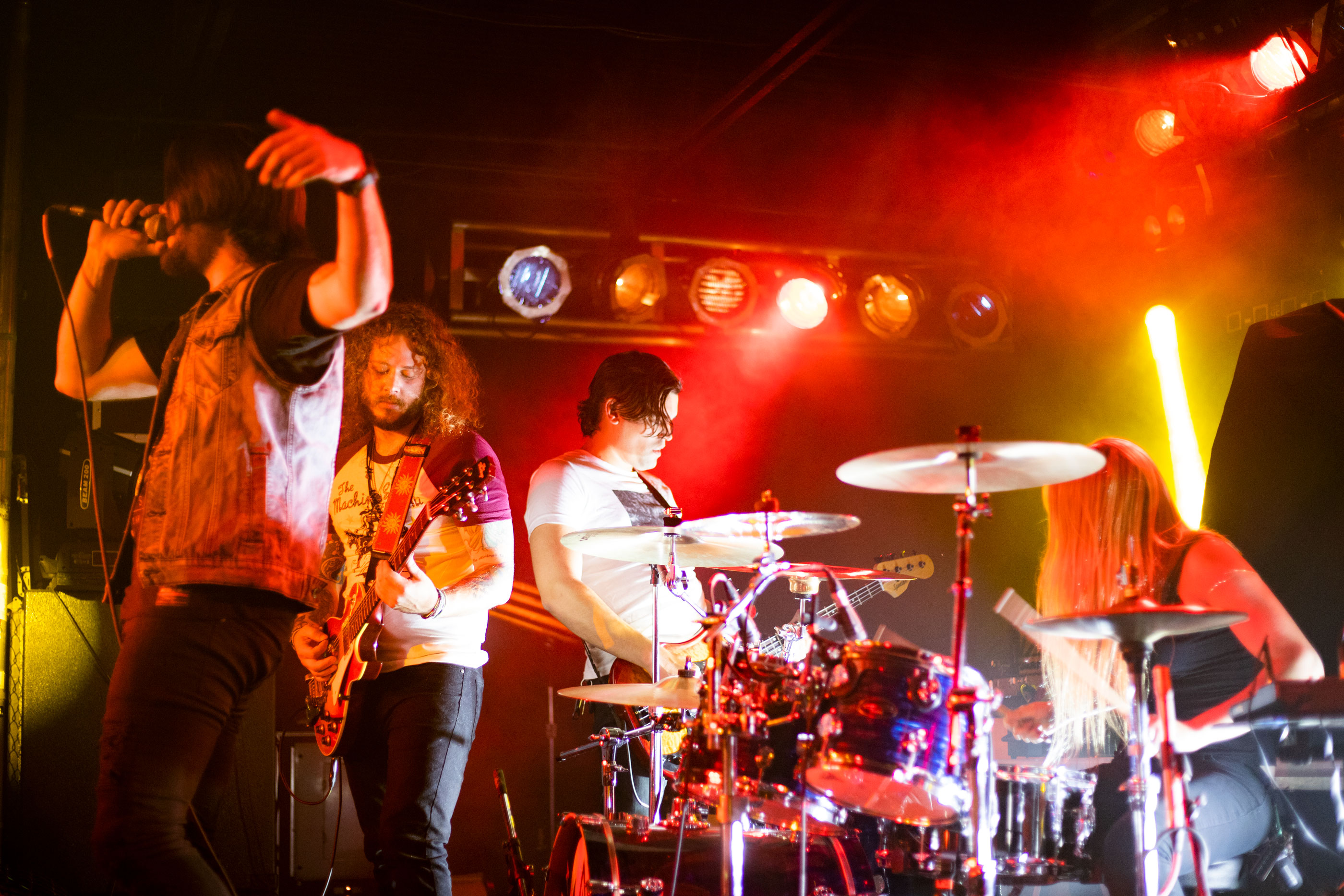 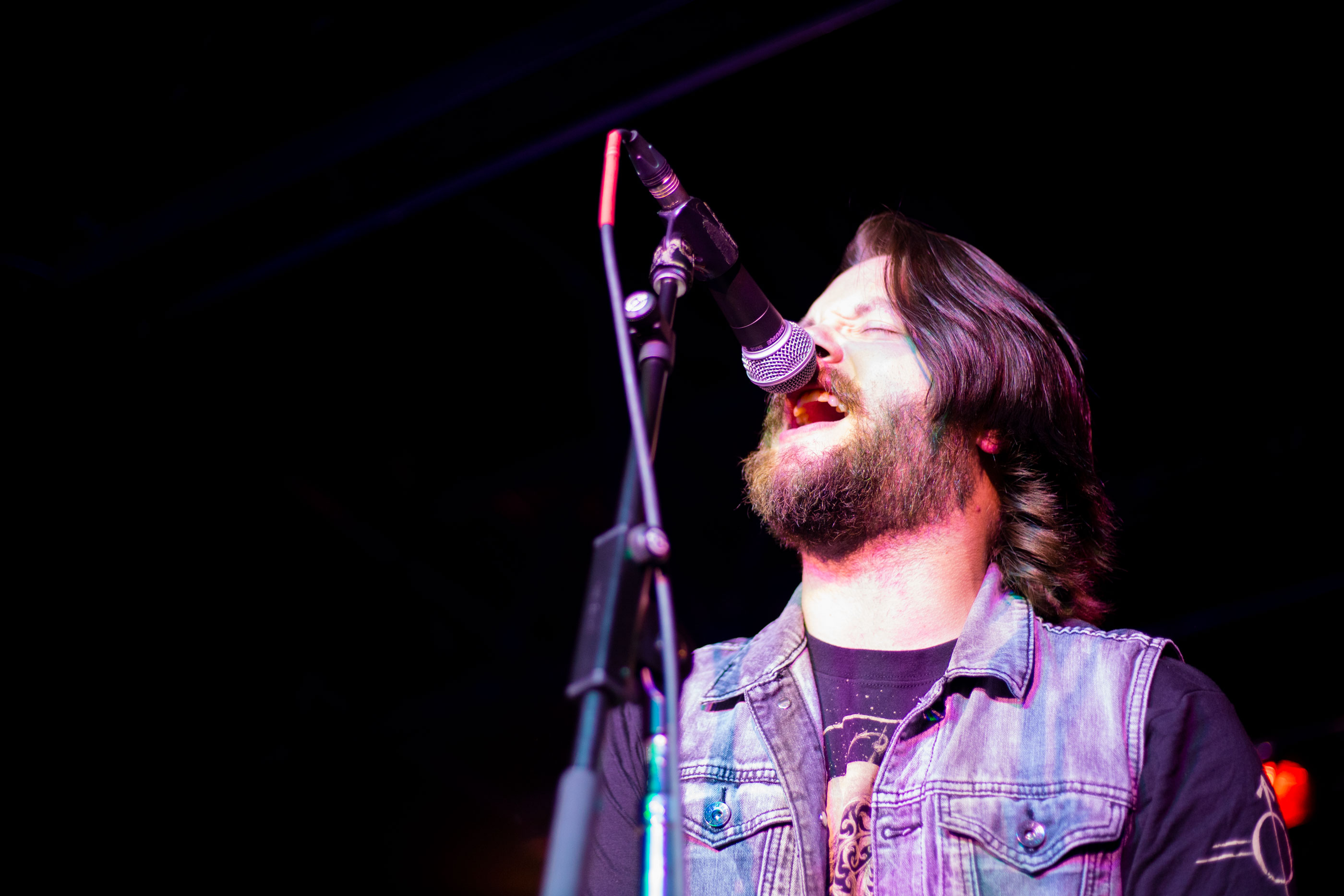