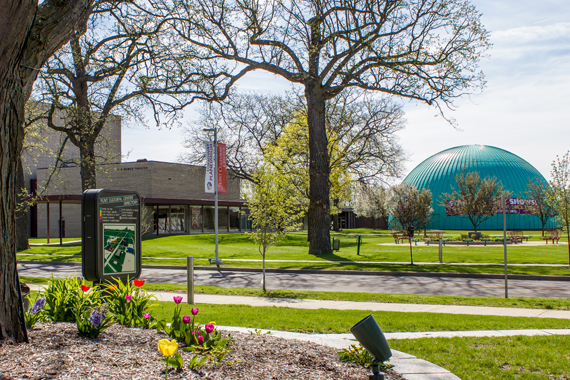 In a mini-lecture on the Hubble Telescope held at Longway Planetarium on May 23, Dr. Rajib Ganguly, Assistant Professor of Physics and member of the Astronomy Research Group at the University of Michigan-Flint, regaled an audience of nearly 60 people with tales from afar. How far? The farthest object that Hubble has seen to date is 33 billion light-years away. Dr. Ganguly detailed the telescope’s prominence in space study, its accuracy, and its data gathering capabilities.

Due to its unique position and viewing prowess, Hubble has become the most prolific astronomical research tool in history, contributing data for more than 15,000 research papers. In fact, Dr. Ganguly announced at the Planetarium lecture that he and his former advisor, Dr. Jane Charlton, Professor of Astronomy & Astrophysics at Penn State, have recently received two grants to conduct research using Hubble. Dr. Ganguly is spearheading a project called “The Geometry of Quasar Outflows,” a title he claims has something to do with black holes, which Ganguly calls “his love.” His research has been focused on the supermassive black holes that reside in the centers of galaxies; black holes that Dr. Ganguly says are “several million to tens of billions times the mass of our Sun.” He explores the mystery of how black holes grow to this size.

Between the two grants, UM-Flint has received $60,000, which provides a salary for Dr. Ganguly and his student research assistants throughout the summer, and covers expenses for travel and to advertise findings, including publication of the resulting paper in a science journal. Dr. Ganguly says that this grant makes possible his research because he can dedicate time to it without having to worry about his livelihood in the meantime. He says, “I can do this research, and involve some of our student majors in the opportunity, exactly because I have the grant. It is a boon for me, and a boon for our program.”