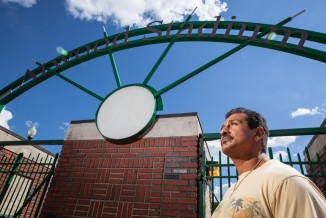 It was a place where rival high school football teams fought for victory in front of thousands of screaming fans, where high-profile boxing matches and concerts were held, and where presidents Franklin Delano Roosevelt and John Fitzgerald Kennedy delivered powerful speeches. Yes, Atwood Stadium is a place where memories were made and champions were born.

The stadium was built in 1929 and named after Edwin Atwood, the mayor of Flint at the time. Mike Sanchez, a retired General Motors worker and Linden resident, grew up just one block from the stadium. He and his brother, Mario, both have many childhood memories about Atwood. Mike proudly displays a poster in his home that photographically highlights 75 years of memorable events at the stadium. “It was just the best place to be,” Mike reminisces. As a child lying in bed during the summer, he could hear the announcer giving the play-by-play from the press box. “I would lie next to the window and listen to the whole game!”

Mike, Mario, and their older brother Sam all worked at the stadium; Mike was a concession peddler. “Popcorn, peanuts and caramel corn!” he yelled as he walked around selling snacks to hungry fans. Mario also worked at the concession stand, popping corn. He would walk around the stadium selling drinks and shouting, “Get your ice-cold pop right here!”

When Mike was in junior high school, he loved to read and became hooked on books by author, Nicky Cruz. Cruz was an ex-New York gang leader who turned his life around and became an evangelist. “He got his life together and I thought that was pretty cool,” says Mike. Imagine his surprise when Cruz came to speak at Atwood. “I had always wanted to meet this guy, and I got his autograph at the stadium.” Mike also attended concerts at Atwood, including rock superstars Journey and Pat Benatar. 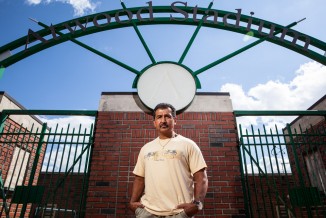 The downside of living by the stadium, Mike believes, was the traffic jams on Fridays and Saturdays. “The stadium was so jam-packed, the traffic on Third Avenue was bumper to bumper,” he remembers. The upside was the Central and Northern football games. He can still express the details of some of the games, play by play.

One event that stands out was a game in the early 70s between Flint Southwestern and Flint Powers. “It was one of the best football games I ever saw at Atwood Stadium,” he shared, adding that the stadium was so crowded, people had to be turned away. “It was an air show with Southwestern’s quarterback, Rick Leach, connecting a 60-yard pass, and Powers’ quarterback would do the same thing with his receiver,” Mario explains, “and the fans went nuts as the game kept going back and forth.”

Though all of the football games were exciting, Mike’s favorite was played on Thanksgiving Day. “My best memory of Atwood Stadium is the Thanksgiving Day games between Flint Central and Flint Northern high schools,” he says. Mike remembers walking down the street to the stadium and smelling the delicious aroma of Thanksgiving turkey dinners cooking in all of his neighbors’ homes. On that day, he and his brothers made a lot of money parking cars.

One of Mario’s most cherished childhood memories of Atwood was when Michael Landon, who played Little Joe Cartwright on the popular western television series Bonanza, rode into the stadium on his palomino. “They were playing the theme song from the show,” Mario recalls, “and that horse looked like it was ten feet tall, to me. It was a big, beautiful horse.”

Mike moved away from home at age 19, and his parents also relocated. The condition of Atwood Stadium began to deteriorate and the neighborhood went downhill as many of the elderly neighbors sold their homes or passed away. Many homes became rentals, and crime started to pick up. The stadium closed in the early 90s, but reopened in the late 90s with the help of a grant. Kettering University recently took over operations of Atwood Stadium with plans to make it a vibrant community gathering space, capable of hosting a variety of sporting events, concerts and other community happenings.

“There is a lot of history at Atwood Stadium,” says Mike, “and it’s a good thing for Flint. I hope it will be every bit of what it used to be when I was growing up.”