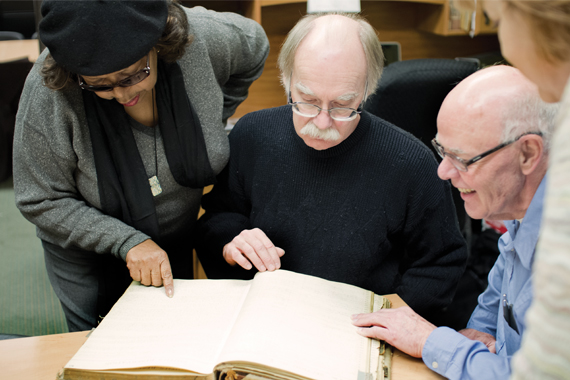 Family trees are often drawn depicting one’s ancestors in the branches above a living descendent; however, that visual is rather misleading. A more accurate version would show our forefathers as roots, for each of us has a family that grounds us, orients us, and makes us who we are. The further you search backward, the more the roots look like an intertwined web of endless connections. Have you ever followed the threads of your family tree?

The Flint Genealogical Society is comprised of a group of experienced and passionate researchers. “We’re really more like puzzlers,” said Trudy Krueger, who is a past president of the Society. “We follow the smallest threads of information, because you just never know where they may lead.” Vice President Della Gamalski added, “It’s an absorbing hobby; I don’t do anything except genealogies.” Like detectives working a cold case, these two ladies, and other Society members, have solved hundreds of genealogical mysteries. Trudy says that the “case” she is most proud of began with a request from a Detroit-born Alaskan. “This man remembered attending the military funeral of his mother’s cousin when he was around eight years old,” she said. “The only other piece of information he could give me was that the Marine was buried in his ‘whites.’” Trudy began the search by finding out in which months Marines wear white. After that, she narrowed down the plausible years and age at which the soldier must have died and began combing obituaries on microfilm. “After some hours I came upon the obituary of a young Marine who died in Flint in March of 1959,” she recalled. “I obtained the death record at the County Clerk’s office, and discovered the cemetery where he was buried. I was also able to find other relatives, so I sent all the information off to Alaska. Mission accomplished!” She says it is incredibly rewarding to help someone find missing pieces of their family history, especially when the trail is occluded by obstacles.

The bones of genealogical research, as hinted above, are tombstones and newspapers, for life is recorded in announcements: births, marriages and obituaries. “If you’re unable to find marriage or birth records, death records are a great place to start. Obituaries usually yield useful family information to begin a proper search,” Trudy advised. Housed within the Perry Archives at the Buick Research Center, fondly referred to as “Flint’s Attic” by longtime member Dale A. Ladd, is the Genealogical Society’s own collection of obituaries – 236 volumes to be precise – representing years of painstaking documentation done in the age before computers. Merle G. Perry was an early Society member and officer, as well as the first curator of the Sloan museum. Even on his lunch break, the historian was always working, transcribing information from thousands of area headstones. A peek into his volumes reveals row upon row of names and dates, as well as the occasional note scrawled in the eponymous researcher’s script. Perry’s prolific records are today a valuable resource for the society, whose members continue his work. Whenever the group is not helping community members research and explore their family histories, they are collecting and organizing new reference material. “We have strong working relationships with many local cemeteries, as well as with the library and the courthouse,” said Della, “and therefore we have access to an overwhelming number of resources to assist people with ancestral research.” Assistance is free, and volunteers are available at the archives, the library, and even the courthouse throughout the week.

Burton Mathews is a longtime volunteer for the Flint Genealogical Society, present at the library every day to help local residents chronicle their family histories. The difficulties in tracking down information are significant, he said. Take the census, for example. Firstly, there is a government-mandated 70-year secrecy act that makes census information after 1940 unavailable to the public. Furthermore, census-taking is not a science. Maybe your great-grandmother was at the grocery store when the census man came around. Maybe your great-grandfather was grouchy and refused to cooperate. Maybe the census taker misspelled your family’s surname, or maybe when files became digitized, the transcriber accidentally mistyped. “Not finding someone doesn’t mean they were never there,” Burton said with both exasperation and amusement, “It just means that something happened to make them missing from the archives.” Mr. Mathews has experienced this personally. “I had a family member who lived in Flint in 1910,” he recalled. “I searched and searched. I knew for a fact that this person had lived in Flint in 1910. But the digitized census from that year showed nothing. In my desperation, I searched for his neighbors, and once I realized they were missing too, I got suspicious. I went back to the microfilm, and there they were: the whole block! As it turns out, the transcriber accidentally skipped that page during the conversion to digital files.” With all of the difficulties inherent in genealogical research, particularly with the Internet, where information is readily available but rarely verified, Burton says it takes a combination of experience and imagination to be successful. “There are several go-to methods for beginning an endeavor such as genealogy, and the first is the simplest: start early!”

Sadly, by the time most people become interested in their ancestry, many of their family members who could help them get started have already passed away. Della recommends starting with a basic family tree diagram. Fill in everything you know, and then find the oldest person in your family and record everything they know. Most importantly, Della adds, ask for help. “You can get much further if you have support. Members of the Flint Genealogical Society are always bouncing ideas off each other. Even if your family history isn’t tied to Genesee County, our methods and encouragement will prevent you from becoming overwhelmed, discouraged and burned out.”

History is a fascinating study; people who were once just names on paper seem to come alive when you really begin looking at their lives. Imagine how much more meaningful history becomes when members of your own family suddenly become real to you: inspiring, rebuking, warning and encouraging you with their example. Volunteers like Trudy, Della and Burt help people pick up the scent, as it were, of a person seemingly lost to the forgetful eons of time. When people discover their ancestry, they discover themselves, and Burt says that this is the most rewarding experience. “After all these years of research, the names tend to blur, but the stories don’t,” he says. “The stories stay with me even though I can’t remember all the names.”

Left: Trudy & Della became close through their love of genealogical research. To their delight, they discovered that they are distantly related. Love of ancestry must run in the family! Right: The Flint Genealogical Society receives new requests for help with research every day!

See more photos HERE, or purchase photos from this story by going HERE and selecting the “Flint Genealogical Society” category.