The year was 1995 and the once-proud city of Flint was stagnating. The mighty factories were shutting down. Citizens were fleeing to the suburbs. Schools were closing, buildings crumbling. While the city’s adults lamented a glorious past, its youth, in a valiant search for hope, desperately clung to one of the only things vibrant left in the city – its music. The Flint music scene never faltered, never flagged in the down years. In music, Flint was still relevant, still special and yet, a piece was missing. It was good, not great. Something was needed to put Flint music over the top. But, what or who? Then, from the east, with the speed of a lightning bolt a man appeared. His weapon was punk rock, his style was ridiculous, his mind warped. His name was Jim Fourniadis and with great purpose and energy, he quickly formed a band – Rats of Unusual Size. For six years, the Rats rocked the area, bringing Flint punk to its apex while instilling love for the city in a generation of adolescents, and then, just as suddenly as he appeared, Fourniadis vanished – disappeared without a trace. The Rats were no more and the people mourned.

Nearly 20 years later, in the midst of a pandemic, the city slept while the world was put on hold. In Flint, music – live music – was a distant memory and new music a rarity. As people sat at home dejected with only their tablets and phones, a rumor began to spread: a whisper about a new album, maybe a return. Could it be? Was it possible? Is it … him? How is he still alive? Soon enough, the rumors were confirmed by a performance streamed live from Downtown Flint’s Factory Two. It was him and with a new album to boot. The people rejoiced! Jim Fourniadis and Rats of Unusual Size were back! 

When I recently spoke with Jim Fourniadis, head of the punk band Rats of Unusual Size, his manic energy exploded from the phone. He was older, yes. Weirder? Definitely (if that’s possible) and dangerously motivated. In November, he had returned to Flint with big plans in mind and wasted no time getting the band back together. Before you could blink, Rats of Unusual Size were at Factory Two playing a live-streamed show and announcing the band’s triumphant return. “It was like I never left,” he laughed. “We got together, had a couple of rehearsals and just nailed it. It’s the coolest thing.” 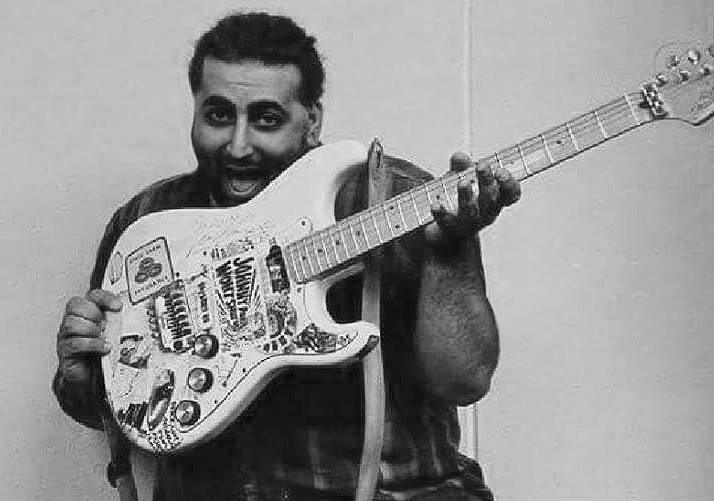 Founded by Fourniadis in New Jersey in the late 80s, the Rats’ music is a unique blend of punk and humor, characterized by offbeat lyrics and entertaining shows. Playing in New York, the band struggled to get recognition; but after a move to Flint in 1995, they took off. “I first heard of Flint when I met Joel Rash in New York,” recalls Fourniadis. “We roomed together for a while and started a record label. After that fell through, Joel went home. The Rats began to splinter a bit and Joel suggested I move to Flint.” Rash organized a tour for the Rats playing venues in and around Michigan. After the tour, Fourniadis decided to make the move to Flint permanent. He reformed the band with veteran local musicians Steve Reddy (bass), Tim Flynn (drums) and Gary Mueller (lead guitar) and proceeded to build a legacy. “When I played Flint, I fell in love with it immediately. We were really embraced by everyone,” he says. “In New York, I was lucky to play for a crowd of five people. Flint shows were packed! It was like heaven. Flint is full of really cool, really nice people and their creativity is off the charts.”

The band headlined local shows for six years with Fourniadis supplementing his income working at Bogner’s Music Store. In the fall of 2001, things changed for him. He fell ill with a terrible bout of pneumonia that nearly ended his life, then lost his house. “I was in a rough place that year,” he remembers. “I wasn’t doing very well. I felt like I was spinning my wheels.” Desperately hoping for a break, he received a call from a friend in California who offered him a chance to make a move out west. “I had always wanted to try my hand out there so I accepted,” and with that he was gone from Flint.

With his fresh start in hand, Fourniadis landed in San Francisco. “I opened a theatre there called the Dark Room,” he says. The venue featured live comedy, theatre, musicals and the popular “Bad Movie Night.” On the side, he wrote music and lyrics for musicals such as “Lovesick: The Cat Allergy Musical” and a musical adaptation of “The Wicker Man.” After nearly 12 years in operation, Fourniadis closed the theatre in 2015 and moved with his wife Erin to the nature of northern California. “At the theatre, we had a lot of harassment from Dracula spectators and the city was constantly changing the earthquake building codes,” he explains. “We just couldn’t afford to retrofit the facility.” 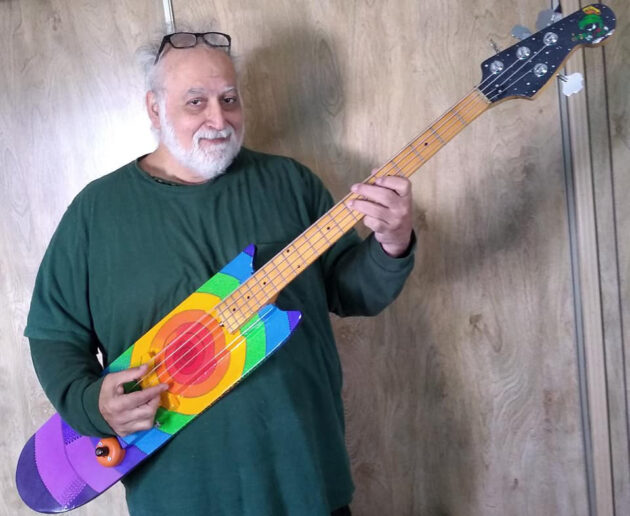 During the COVID lockdown, Fourniadis re-focused his creativity on making music and resurrecting Rats of Unusual Size. “I never put the band together in California and I felt like it was past time to make a statement,” he adds. He started working on his new album and dialed back to the creative minds in Flint for help. “I made contact with Todd Gilbert and we worked on it together. It reminded me of all the great people in Flint. I missed them, but I still hadn’t thought of going back until my wife suggested it. At first, I thought she was kidding,” he laughs. So, they loaded up the van and made the trip. “I’m a veteran of vans – it felt like touring again. I used to be a roadie and guitar tech for the Steve Miller Band,” he reminisces. “I remember that they would always have this silver suitcase full of cocaine that they would pay us with. I was the only one who declined and took cash. That always bugged them.” He landed in Genesee County in November and put the finishing touches on his new album.

Released in December 2020, the new album entitled Country, Blue Grass, Blues (CBGB) is classic Rats punk rock – with twang. It features Fourniadis originals along with covers of classic rock tunes. “It’s a little more rootsy than in the past. I call it Cow Punk,” he laughs. “A lot of it is inspired by music I liked as a kid. I cover songs by classic songwriters like Warren Zevon and Steve Earle. I like to cover songs that sound like they could have been Rats of Unusual Size originals.” In each song, you can hear the style that inspired it. The Johnny Cash-esque “Ringo” or 50s era rock “Riot in Cell Block #9” co-mingles with the witty lyrics of Fourniadis and takes Rats back to a simpler time, while “Stoned Again,” “The Corner Store” and “The Gas N Gulp” are perfect for the band diehards. The album is a mix of old and new (or Flint and California, as it seems). CBGB is available for download at the Rats of Unusual Size Bandcamp page and on Amazon. 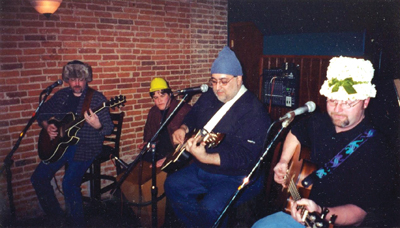 Besides performing with Rats of Unusual Size, Fourniadis is planning an album of “Saturday Morning Cartoon” covers with the band and a (third) Christmas album with another group, Saturday Saints. He’s going to get back to directing and finishing scripts he has written and has started filming an online version of “The Twilight Zone” starring Flint locals available soon on YouTube. Looking forward, he would like to start working in theatre again and bring Bad Movie Night to Flint.

“It’s great to be back,” Fourniadis says. “Flint has changed and for the better. It’s amazing and I love it. I’m excited to continue to be creative and do what I like to do and that’s get up on stage, jump around and act like an idiot.” Welcome back Jim