Lying flat on his back, Miguel Ruelan stared at the weight bar above him. On the bar’s ends was enough weight to total 451 pounds, an amount that would set a world bench-pressing record, if he could properly execute the lift. With three international judges scrutinizing his every move, the tension in the room was palpable. Fluorescent lights buzzed overhead and a spectator’s cough broke the silence of the crowd. Taking a long, deep breath, he exhaled as he carefully lifted the bar off the rack. Seconds felt like hours as he held the massive weight above him, waiting for the judges’ command that would allow him to lower it …

Dr. Ruelan has been the owner of Flushing Back & Neck Care Center since 2001, and he is known during working hours as the friendly chiropractor who helps improve health through proper spinal alignment. But he’s also a man who pursues an active and healthy lifestyle of his own as a power-lifter specializing in bench press. Hours before Miguel Ruelan, D.C. gently adjusts a patient’s spine on any given weekday, he was busy lifting hundreds of pounds of iron. As a member of the Flint Barbell Club’s “8am Club,” he’s at the gym each morning, preparing for his next competition.

On July 19, 2014 in Detroit, Miguel competed in the Michigan American Powerlifting Federation’s 3rd Annual Can-Am Bench Press Championships. Weighing in at 177 pounds, his challenge was to bench-press 451 pounds, which would set a new Masters World Record for his weight class. The key was not the weight, however, but his technique. He would have to lift the weight with perfect form, which means no moving, raising or shifting of his body in the process. “Since I’ve bench-pressed 500 pounds in the past,” Miguel said, “I was more concerned about my form going into this competition because I knew the judges would be looking at that.”

On his first of three attempts allowed, he recalled, “I lifted the weight and racked it, but when I turned around to look at the judges, I saw that one of them had given me a red light. This meant my lift didn’t count.” In competitive powerlifting, world records can only be set if at least three international judges are present to officiate. At the Detroit event, there were three judges – two from the U.S. and one from Brazil – and Miguel says that it was the Brazilian judge who had flashed the red light. “Some people told me that she has a reputation for being a stickler on form,” he said. “Apparently, she said I had shifted my rear end on my first attempt.” 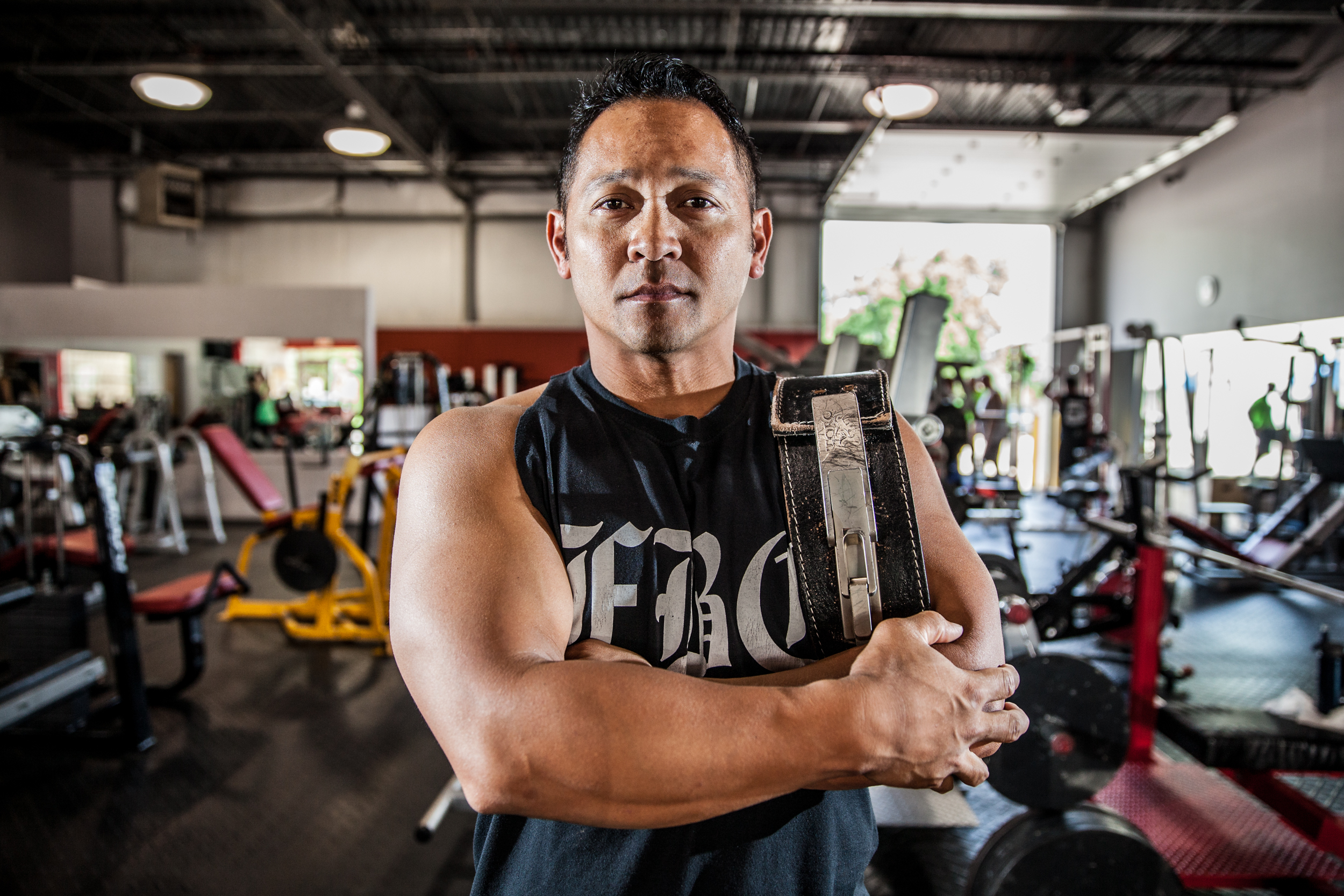 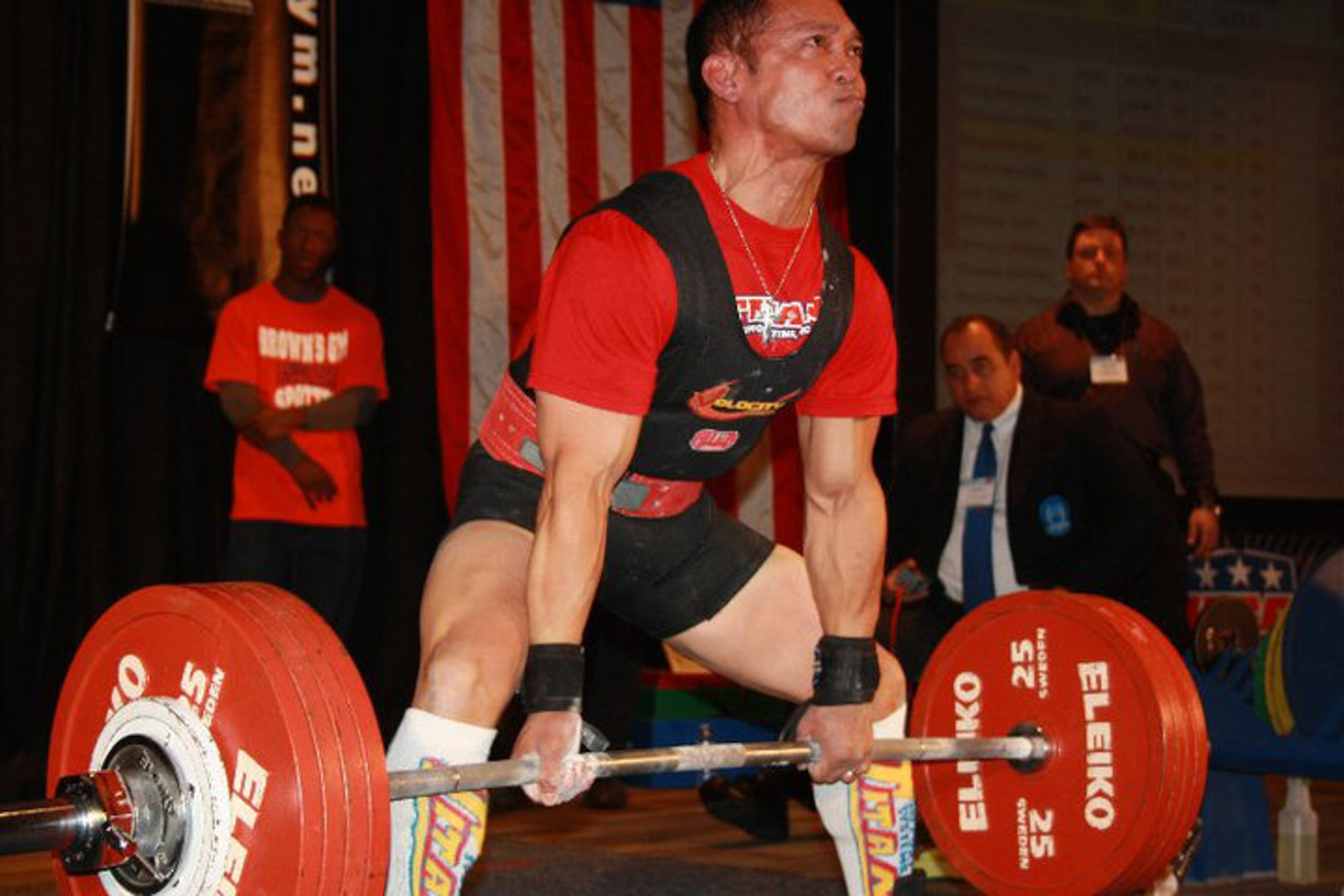 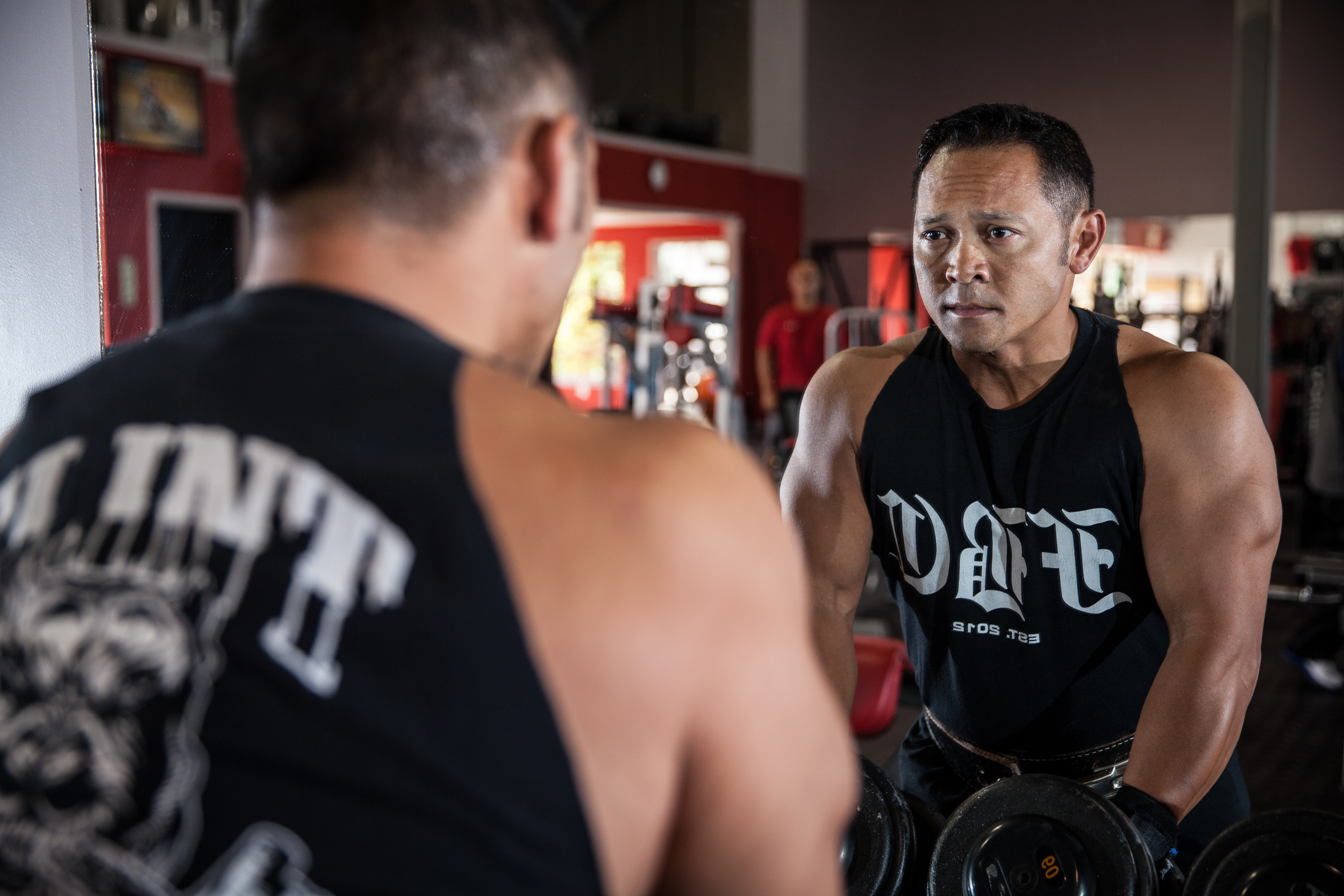 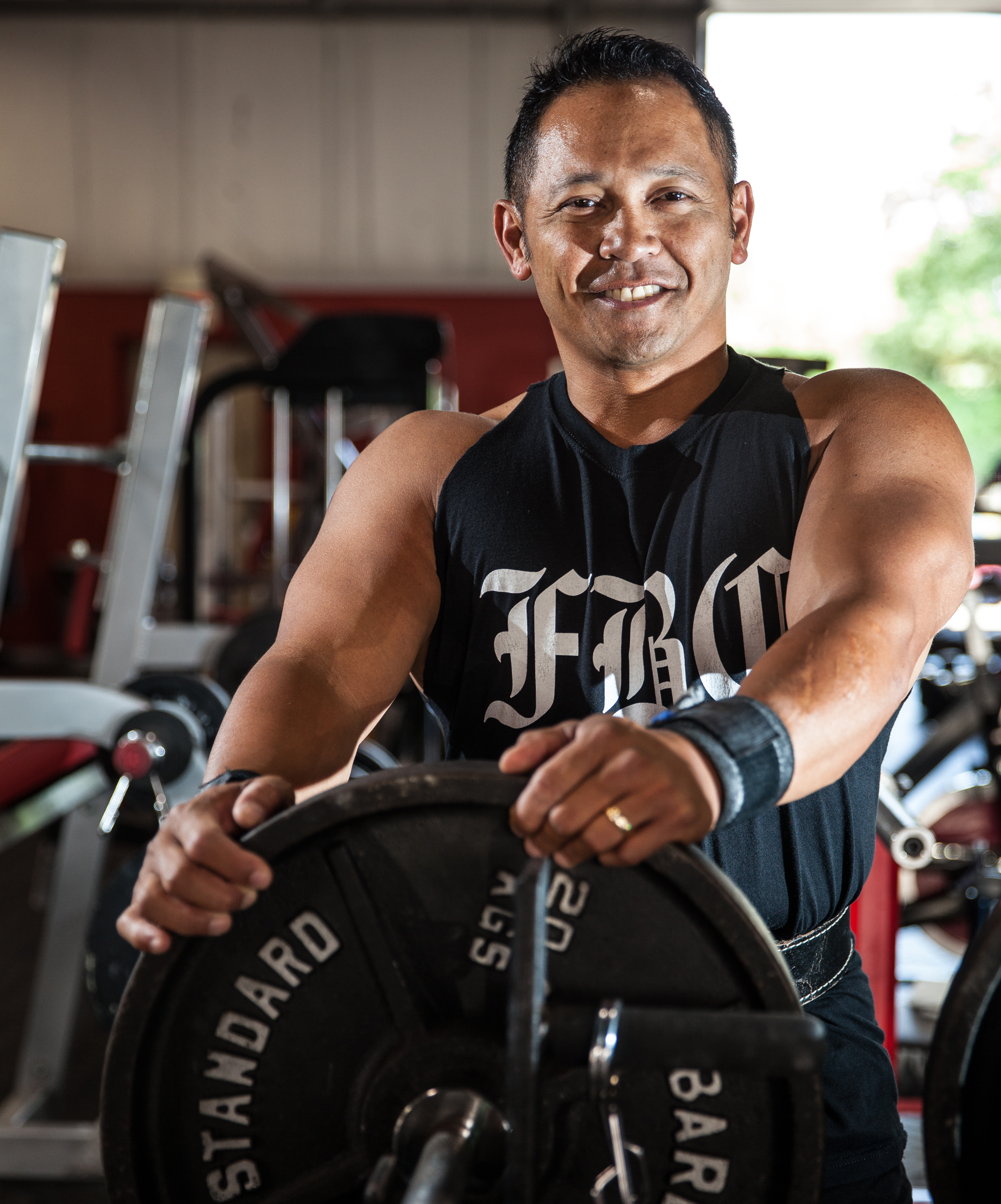 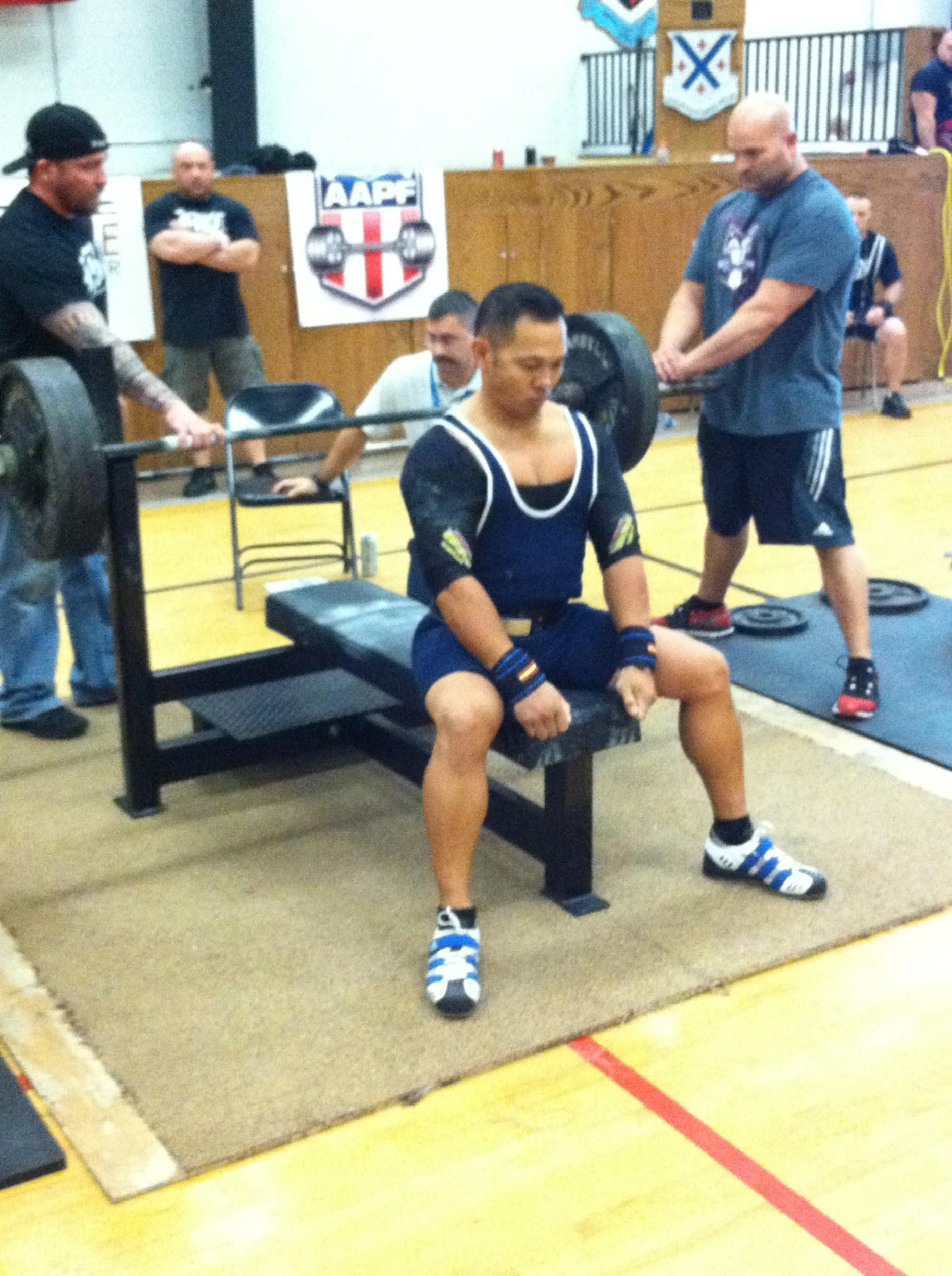 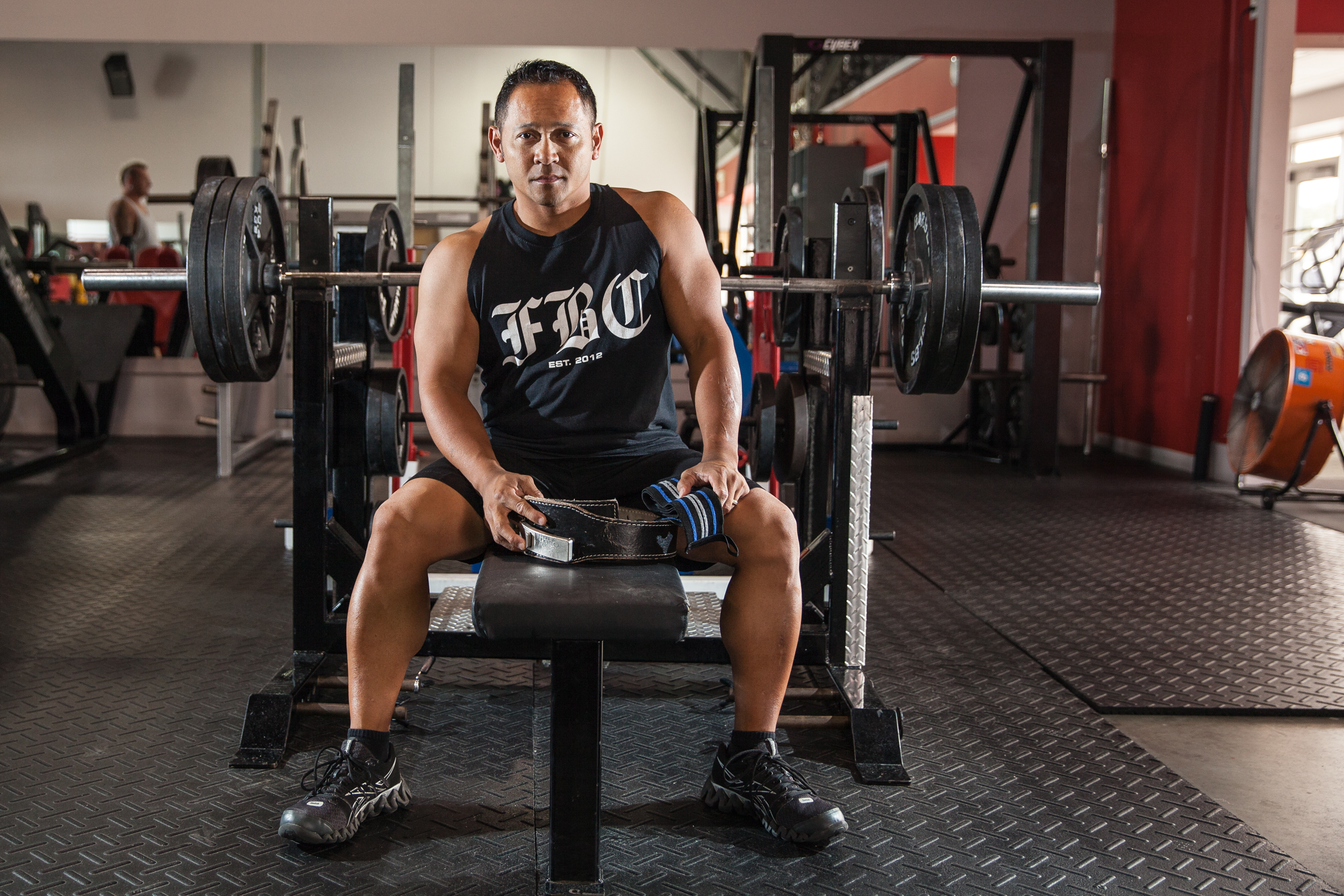 Allowed two more attempts to set the world record, Miguel settled back onto the bench, determined to succeed. Once more, he lifted the weight from the rack, lowered it to his chest and pressed it before returning the bar to the racked position. Nervously, he turned to the judges and was instantly relieved to see three white lights shining back at him, meaning that the lift was good and the record had been set. Miguel recalls being happy about his accomplishment, though he wasn’t cheering or jumping for joy. “I think I just wanted to make sure the judges 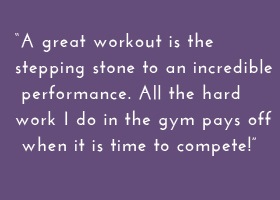 weren’t going to change their minds about my form!” he laughed.

While most people would have been content to go home with a new world record on only their second try, Miguel wanted to take it a step further. With one attempt left, he lifted 479 pounds, which would’ve broken his own newly-set record … if the lift met the judges’ standards. “I turned and saw the red light,” he said. “It was the Brazilian judge again; she said my rear end came up off the bench on my lift.” Though he was unable to set two world records in one day, Miguel was happy to have achieved the first, which he’s added to the many Michigan State Records he’s set over the years.

Miguel’s introduction to the sport of powerlifting came in 1987. As a young man looking to get a little more serious about weight training, he walked into Iron City Gym in his hometown of Blackwood, NJ. Of his prior training, Miguel recalled, “My only experience was using universal machines, so I wanted someone to coach me with free weights.” As luck would have it, the owner of Iron City was a former Olympic power-lifter who saw promise in Miguel’s bench-pressing abilities. The trainer convinced him to enter a fundraising competition at the gym, which Miguel won. From there, he says he progressed to “many state competitions, eventually earning enough merits to compete at the national level.”

During the 1990s, Miguel stopped competing while he attended Palmer College of Chiropractic in Davenport, IA. In 2001, he hung his shingle in Flushing and returned to competitive lifting. He was urged back into competing by friend, coach and training partner, Marvin Coleman, Flint Barbell Club co-owner. “Miguel has good form and technique,” said Marvin, “and he’s meticulous about his training. He’s also very analytical with himself; he’s able to step back and take a hard look at his form and determine whether he’s getting results from it or not.” A competitor himself, Marvin added that he never misses the opportunity to attend an event in which his friend Miguel is competing. 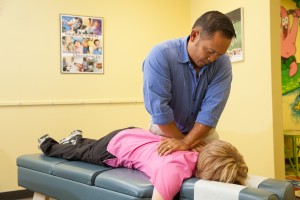 In the second incarnation of his competitive career, Miguel’s wife, Heather, was reminded that her husband’s hobby is not without risk. Of the incident, she recalled, “He was competing in Midland and sent the bar up too quickly, and wasn’t able to lock his arms. One of his spotters didn’t grab the bar in time, and it came back down and hit Miguel in the face.” Luckily, he turned his head just in time, minimizing the severity of his injury, which included a cut under his eye and the feeling that he’d been knocked unconscious, if only for a few seconds. “All I remember was jumping from my seat and running to him,” Heather added.

Despite that one unfortunate incident, Heather says she knows her husband’s hobby is relatively safe and fully supports him in his endeavors. She understands his desire to push himself to be the best he can be in his sport because she has those aspirations for herself, as well. In addition to being a personal trainer at the Flushing YMCA, Heather is an avid professional figure competitor. “In November,” she said, “I’ll be competing as a professional in a women’s figure competition in Toronto. I’m very excited about it, although it means missing one of Miguel’s competitions.”

Miguel, Heather, and their two children, Diego and Dallas, have been Flushing residents for 13 years. The couple say they love the community and, more importantly, being a part of it. “After graduating from Palmer,” Miguel said, “I was considering professional opportunities in Indiana, Ohio and Michigan. From the first time I visited Flushing, I fell in love with that hometown feeling where everyone knows each other.” Miguel returned with Heather in tow, wanting her to experience the Flushing feeling. The couple went downtown, a visit that coincided with the annual Christmas Candlewalk event. “That did it for her!” he exclaimed. “We’re very happy that our children can grow up here.”

Twenty-seven years after the fateful day when he walked into his first gym, the chiropractor, husband, father and Flushing resident continues competitive lifting, attempting to set world records in the process. By all accounts, Miguel’s hobby has been more like an adventure! ♦