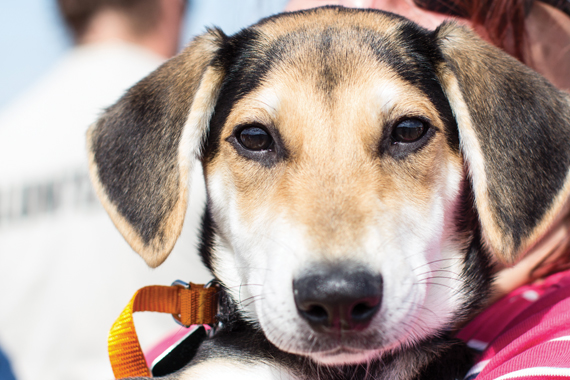 The star of the the show at Pet Fest 2013 was Angel, a three-legged pit bull. She was one of many dogs available at the mega adoption event held on August 10 at Genesys Health Park in Grand Bland Township. According to Dawnell Binder, Volunteer Coordinator, Angel was found tied to a pole so tightly that her right front leg had to be removed due to injury. Another dog stood at Angel’s side when the two were found by PAWS Animal Rescue, a rescue organization that has been around for 25 years. When a young couple from Flint stepped up and adopted the special-needs dog, there were more than a few misty eyes. Mark and Goldie Drake are Angel’s proud new owners. “She just melts your heart,” said Mark with a smile. “I always wanted a pit bull; they are such a misunderstood breed.” Goldie added, “She’s really sweet and kind.”

Multiple rescue groups participated in the eighth Pet Fest event, including Fenton Adopt-A-Pet, PAWS, Forever Friends, Canine Companions, K-9 Stray Rescue, Lucky Day Animal Rescue, Los Gatos Cat Rescue and House of Hope. All of the animals had been spayed or neutered and were ready for a loving new home. Pet Fest coordinators were thrilled to have more than 1,200 visitors. “This was the best we’ve ever had!” exclaimed Dawnell. “Fifty adoptions took place on the day of the event and 12 more are pending!” When My City Magazine stopped by Kitty City and Dog Town in the late morning, more than 400 people had already visited. “People were lined up at the gate,” Dawnell smiled.

Lucky Day Animal Rescue was founded by Gretchen Sommer, who also volunteers at the Genesee County Humane Society. She said their rescue organization takes in many older animals with special needs. Dawnell said animal rescuers are committed people: once it’s in their blood, it becomes a lifelong mission. Jodi Maddock, Director of Fenton Adopt-A-Pet, and Glenda Beatty of PAWS are two such individuals.

With the adoption of a mixed-breed terrier, siblings Tessa and Brandon Bean of Swartz Creek have a new addition to their family. “We are very excited,” said their mother. “We already have a husky at home that needs a playmate!”

Pet Fest organizers were excited to welcome several new rescue groups this year, including House of Hope, Inc. and Los Gatos Cat Rescue in Davison. Added Dawnell, “They are all saving animals’ lives – and changing people’s lives – one paw at a time.”

Are you interested in purchasing photos from this story? Go HERE and select the “Pet Fest” category.