It’s Friday night and you want to hang out with friends and unwind after work. What’s your favorite local place to go for a cold brew and some great pub grub? Here are some of My City’s favorites! 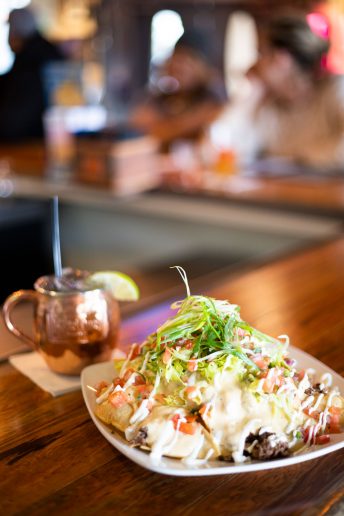 This is not only a popular hangout for Fenton locals, but for people from all over, as well. Patrons enjoy the super-delicious Shaved Ribeye Nacho, according to Brodie Thomas, Server/Bartender. “We sell a ton of them!” she exclaims. The plate of goodness starts with house-made tortilla chips piled with thinly-sliced ribeye steak that is grilled on the flat-top, then smothered with a jalapeno-bacon-cheese sauce (also made in-house) and finally, topped with freshly made pico de gallo, shaved lettuce and lime sour crème (lime zest). “It’s a huge portion,” says Thomas, “and it is amazing.”

Also popular at the Corner Bar, which is owned by Justin Knight, is The Classic – a burger on a sesame seed bun topped with American cheese, shredded lettuce, tomato, pickles, red onions, catsup, mustard and mayo – and the Krispy Brussel Sprouts, which are fried and tossed with red wine vinaigrette, candied walnuts and crispy capers. 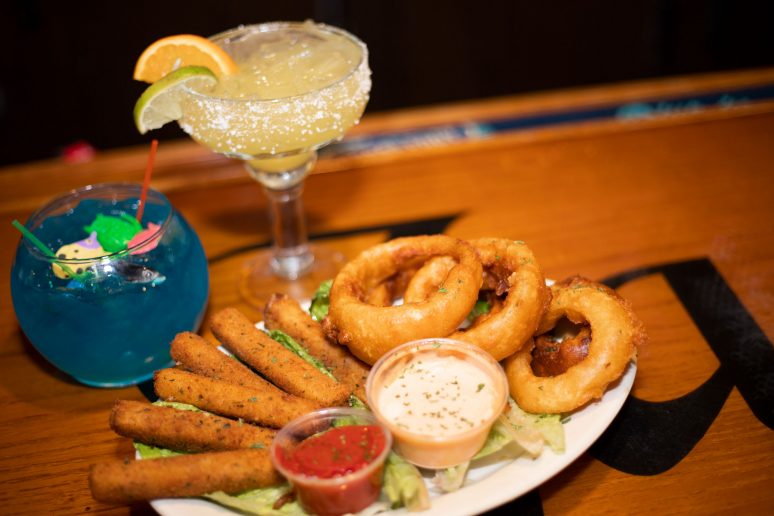 Located in Flushing Lanes bowling alley, this little hidden gem has been around since the ‘70s, according to Nicole Stroup, Bartender. “We have live music, pool leagues and great food!” she exclaims.

What makes the place special is the care that is used in preparing the food. “Our onion rings are hand-cut, hand-dipped in batter and deep-fried,” says the bartender. “The cheese sticks are actually cut from a huge block of mozzarella, and hand-dipped in our own breading mix.” Other favorites you will find at Jack’s Place are all-you-can-eat walleye, wings, daily specials and more. Stroup’s personal favorite is the steak sub – shaved steak, onions, mushrooms and Jack’s own special seasoning, piled in a fresh sub bun. “Customers love our steak subs and the cheese sticks.”

Jack Kerns, the original owner who is now 86 years young, comes in daily to see how things are going. “It’s a fun place to be,” says Stroup. “It’s a little local hangout and people love the food.” 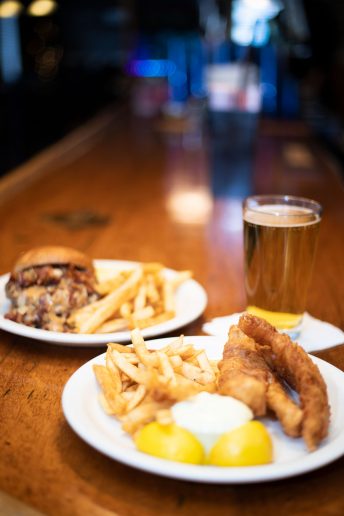 Hungry for fish and chips? Head out to the Linden Hotel Bar & Grill/Crow’s Nest, nestled in the quaint little town of Linden. Established in 1840, it is believed to be the oldest continuously working business in Genesee County. The Crow’s Nest is located on the upper level for the 21-and-over crowd.

According to Co-owner, Sharon Flowers, their lightly-battered, delightfully prepared pollock draws the most customers. A secret family recipe is what makes the fried fish so light and crisp. “We use a light tempura batter,” Flowers says. The fish and chips are served with two sides, the most popular being fries and coleslaw, and is all-you-can-eat, all the time. The Linden Hotel’s half-pound burgers are also a big hit.

The establishment recently hosted the Fire & Ice charity event, where Annette Murphy won a special auction item – she got to name and design a sandwich. “The Nutty Nellie is delicious,” Flowers reports. “It has received some really good reviews.” The half-pound burger is topped with bacon, sautéed onions, barbecue sauce and peanut butter. “It gives it an Asian flair,” she shares. The Nutty Nellie will be on the menu at the Linden Hotel and Crow’s Nest for the next year. 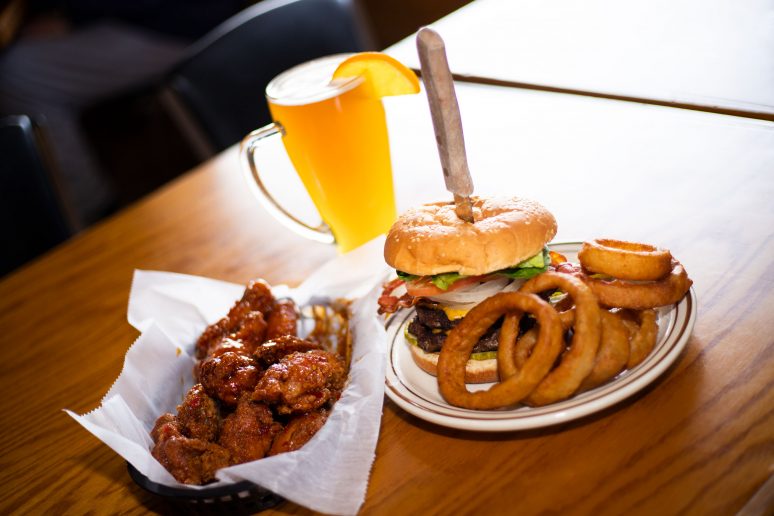 This sports bar is known for its delicious fare, “but our wings are what put us on the map,” says Owner, Mark Morgan. The fresh-not-frozen jumbo chicken wings are, by far, a customer favorite and it is the battering process that makes MoJoe’s wings special. “We double batter them,” says Morgan, “and they are really delicious.”

Wing-lovers can choose from 17 different sauces and rubs, with the top three most popular being the Garlic Parmesan, Spicy Garlic and Sweet Chili. A new flavor recently added is Mango Habanero, which is already gaining popularity. Morgan adds that all of the credit goes to his head cook, John, and the wonderful staff at MoJoe’s. “John’s really the reason we are doing so well.”

You’ll find other delicious bites at this family-friendly place, including the crowd-pleasing Cap’n Crunch Chicken Fingers and fish dinners (perch and cod), served all-you-can-eat style. “You can put our fish up against anybody’s,” says Morgan. 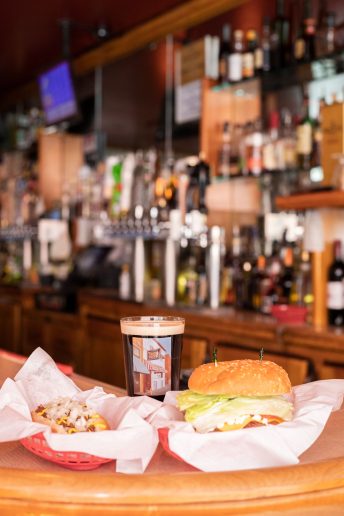 Flint is the home of the famous and award-winning Torch burger, named one of the Top 21 Burgers in the U.S. by Thrillist in 2013. The Torch has served Downtown Flint for almost 70 years in a relaxed, casual atmosphere. The popular eatery and watering hole originally opened as Kemp’s back in the late 1940s.

According to General Manager, Nolan Ward, the half-pound Torch Burger is handmade with fresh-ground beef delivered daily by a local supplier. Never frozen or pre-formed, patties are cooked to order (medium unless otherwise specified) and dressed with mustard, ketchup, pickle and onion. “We cook them low and slow until the desired temperature is reached,” says Nolan. Burgers can be topped with mushrooms, jalapenos, fried egg, crisp bacon and five varieties of cheese. For a real treat, add on some wedge-cut fries, hash rounds or onion rings.

Also popular at The Torch Bar & Grill is the Coney Island hot dog. “People are saying we have the best Coney in Flint,” Nolan boasts. The Koegel dog is topped with Abbott’s Coney Sauce, mustard and onions – Flint-style, of course! Looking back at their seven decades, Nolan says, “We are so happy people have enjoyed our food for so long.” 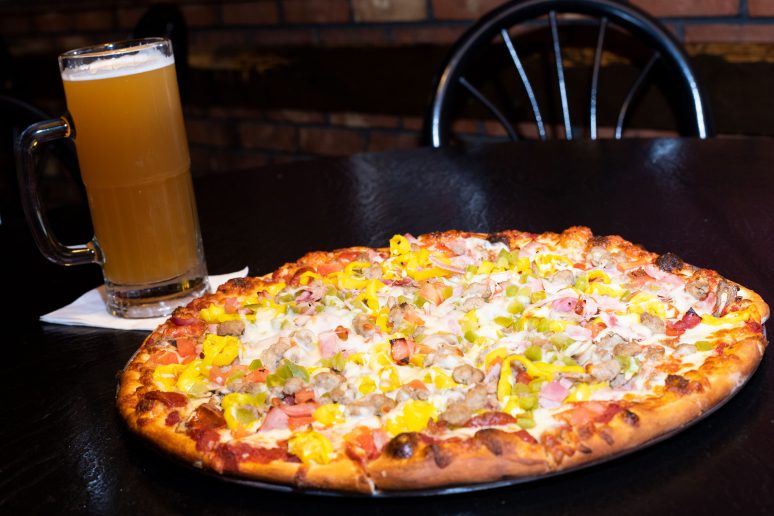 This Flint mainstay has been described as the “Cheers” of Flint: a place where “everybody knows your name.” Going on its 46th year, the neighborhood pub is known for its good food – from breakfast fare served anytime, to burgers and of course, pizza.

And pizza is what hungry guests are looking for, especially on the weekend when pies are half off, according to Steve Poulos, Co-owner with his brother, Chris. “We sell a lot during the week, too. People definitely come in for the pizza,” he says. The medium-thin crust is prepared using old-style, hands-on technique, topped with fresh ingredients and a cheese blend and then, slow-baked to perfection. “All of our toppings are fresh,” says Steve, “and you can order it any way you want it – from vegetarian to loaded with everything.” Burgers are also a White Horse customer favorite, made with fresh Angus beef.