During the renovation of the historic courthouse building, Barbara Menear, Court Administrator of the Genesee County Courthouse, and Deputy Court Administrator, Janet Patsy, put in hours and hours of hard work. They also wrote a commemorative publication about the history of the courthouse, the addition, restorative efforts undertaken, and the many people who were so dedicated to the project. 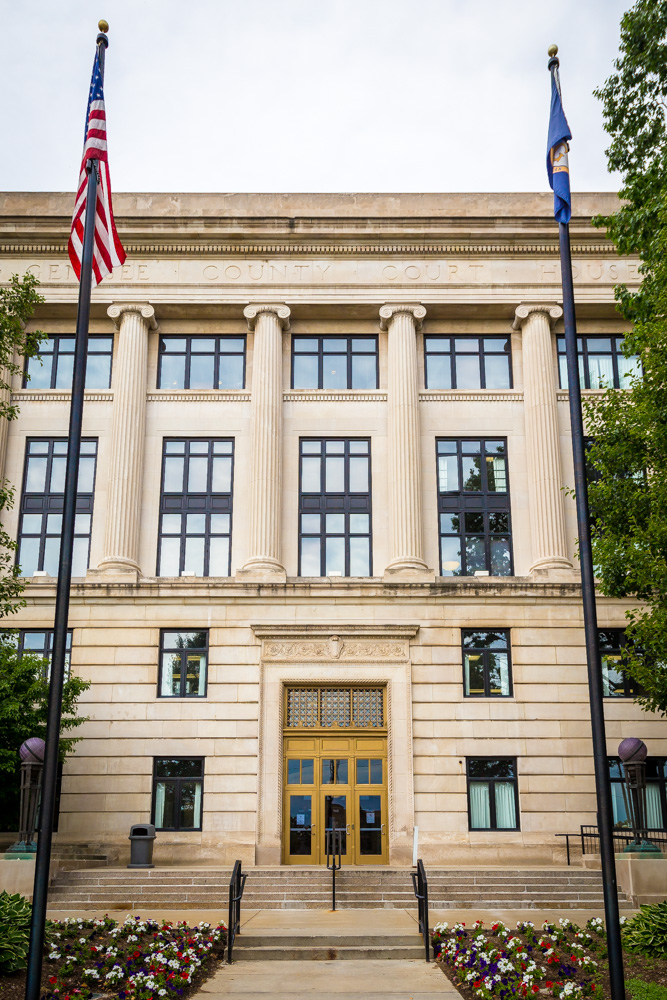 Plans to refurbish the old jailhouse to create additional court space was also considered, but it was determined that the jail should be demolished to accommodate an addition to the courthouse. When the jail structure was imploded in November, 1998, a cornerstone was opened and a copper box with many artifacts from the past was discovered. County Clerk Michael Carr took possession of the contents.

Then, the construction and restoration efforts began. Groundbreaking for the courthouse addition took place on September 28, 1999, exactly 74 years after the groundbreaking for the 1926 building. The date was intentionally selected to forever link the common ideas of a people separated only by time.

Construction began on the five-story, 60,000 square-foot addition, which ties into the existing courthouse. On July 10, 2001, the addition was formally dedicated. After the many years of planning, designing and building, the consolidated court facility was opened for public review. The ceremony was held on the steps of the Beach Street entrance and a time capsule was buried under a granite slab adjacent to the portico. It is marked with a bronze plaque and is not to be opened before July 10, 2101.

Efforts to renovate the original courthouse building were also underway. Because the courthouse is listed on the National and State Registers of Historic Places, restoration was required to be completed in a manner that would maintain its historical integrity.

Courtroom 2 was the model for restoration as it was the only original courtroom that was not modernized during the early 70s, when air conditioning and suspended ceilings were added. The original chandeliers in this courtroom were cleaned and restored, and fixtures were augmented to provide sufficient lighting which, remarkably, did not alter their appearance. The restored fixtures became the model for replication for 11 other fixtures in the courthouse.

Courtroom 3 was the largest courtroom that was restored. Significant effort was undertaken to return all third-floor courtrooms to their original interior colors. No historic photographs were found to illustrate the original decorative scheme. By carefully removing layers of non-historic paint, original brush strokes were discovered. Each courtroom is a combination of several colors and glazing techniques. The Dutch metal cornice near the ceiling line was returned to its original luster. Gold leaf was reapplied to the raised panes. A decorative stenciling pattern, unique to Courtroom 3, was revealed during the paint restoration process. 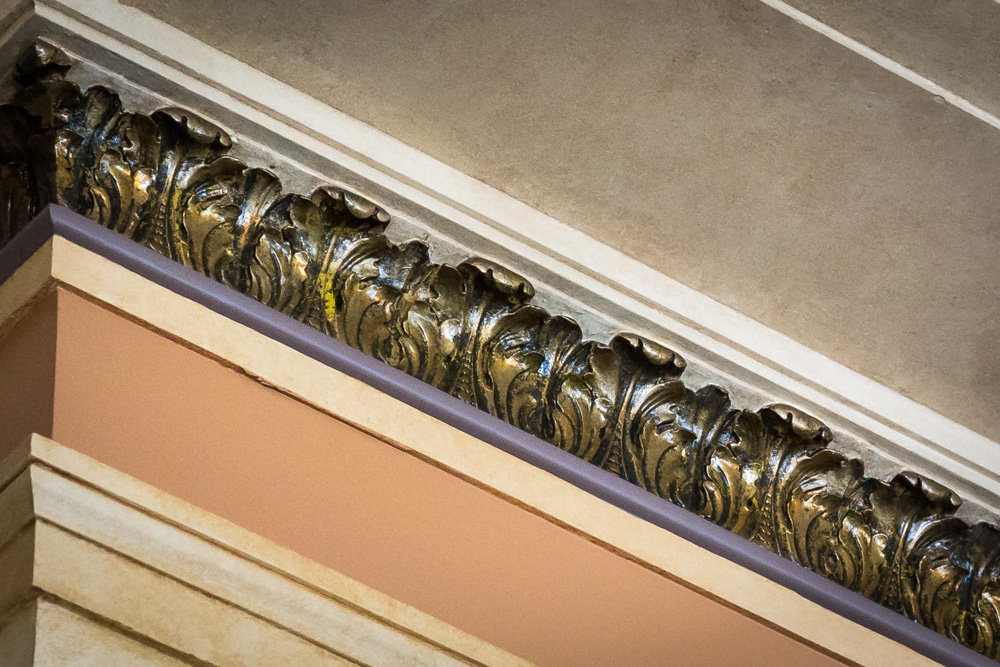 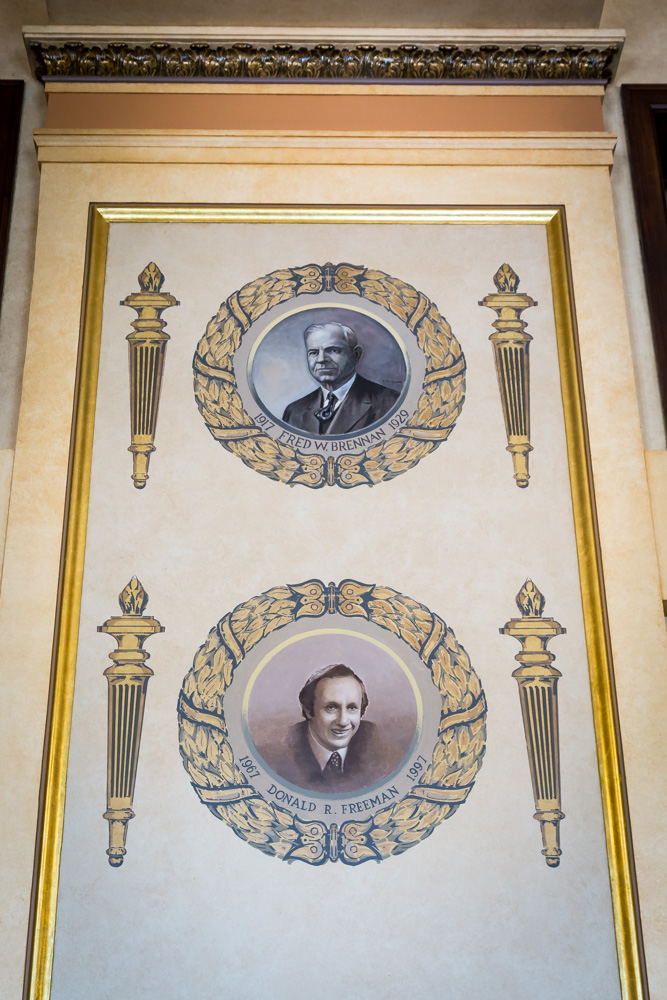 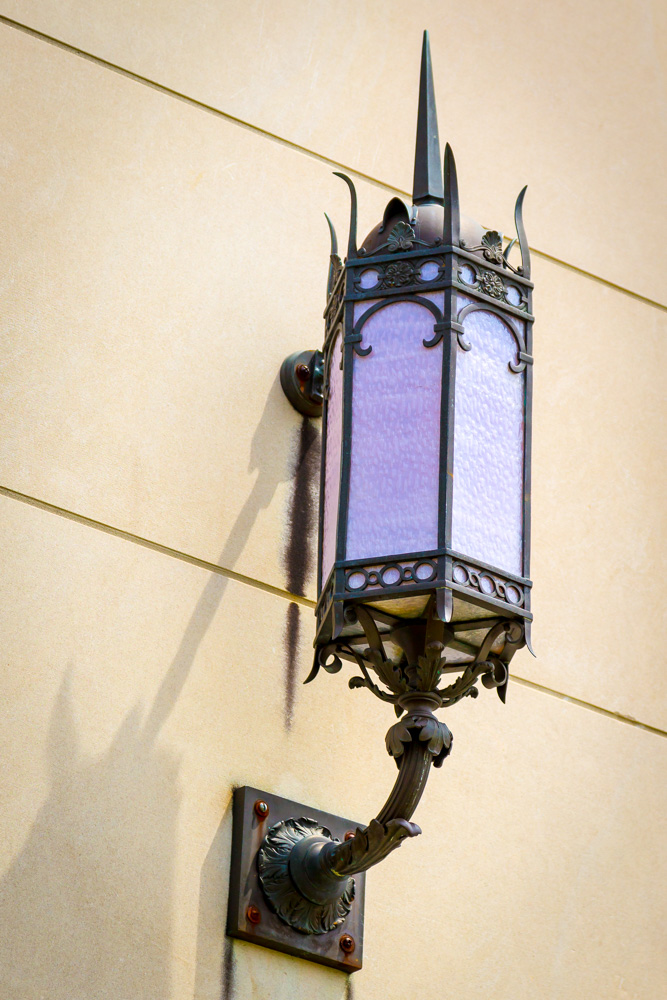 The Ruth Mott Foundation provided funding for the restoration of a fifth-floor courtroom. Without the help of the Foundation, the completed level of restoration would not have been possible.

Michigan Lumber Company fabricated the cornices for the historic third-floor courtrooms. They were patterned after the original pieces and featured raised panes and a decorative center motif. Stephen Heddy of Artistic Decorating was primarily responsible for the faux-painting in the historical courtrooms.

A generous donation from the Whiting Foundation funded the restoration of the exterior courthouse lights. Other exterior lighting at the north and south facades were also restored. Fixtures from the 1930 Genesee County Jail were removed before its implosion, restored and are located at the Beach Street entrance to the courthouse.

On September 12-14, 2003, a three-day event was held to celebrate the project’s completion, attended by over 5,000 people. Barbara Menear shares her memory of the event.

“A ribbon-cutting was held with remarks from court officials. It was attended by hundreds of court and county staff, judges, other elected officials, media and the public. There was a gala event with period attire, vintage automobiles on the lawn (from Sloan Museum), and dramatic and musical selections presented in three of the historic courtrooms. An epicurean line-up of local restaurants had stations throughout the court for attendees to sample local fare. 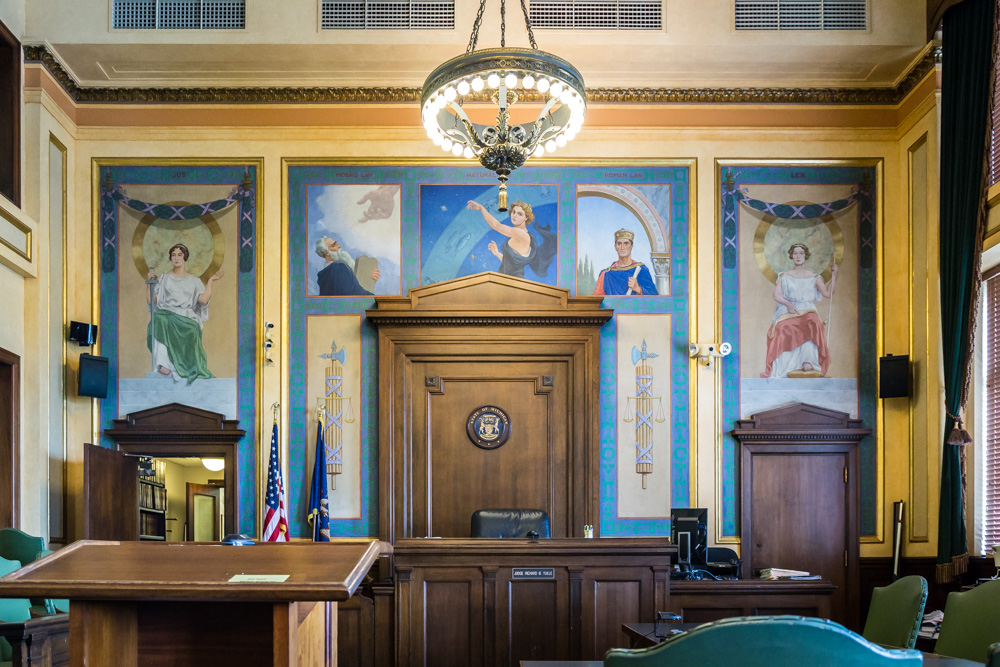 “The gala was preceded by a Prohibition Tea Party at the (former) Bailiwick restaurant. An actor dressed as a police officer blew his whistle and “raided” the place for violating the alcohol ban during prohibition. We were then ‘escorted’ to the courthouse where the gala began in earnest. The gala was funded totally by private donations and ticket sales, netting $25,000 which went to a fund to maintain the historical courtrooms restoration.

“On Family Day, there were courthouse tours and the Civil War monuments were re-dedicated after we had to move one of them. There was a military parade with representatives from each military branch present, a military vehicle for the kids to see, and soldiers in uniform. There was balloon art and other entertainment for the kids. It was great fun!”