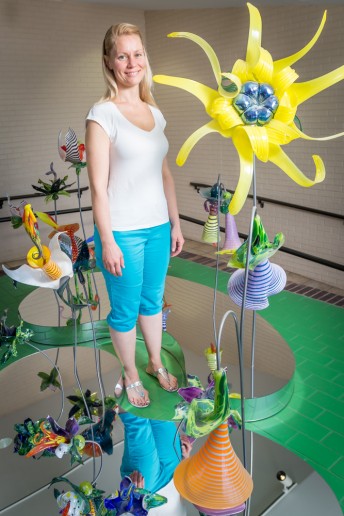 Born in Muskegon, Wagner’s connection to Flint began when Ridgway and Shannon White approached her Pontiac glassblowing studio – Epiphany – to commission her to create a piece for the Flint Institute of Arts’ annual fundraiser, The pARTy. “I hadn’t known much about Flint, but the more I come here, it’s so great,” Wagner says. “Everyone is so friendly, and there’s such a wonderful sensibility about the arts.”

“I always knew I wanted to be an artist,” Wagner says. “When I was really young, I would sit at the end of my grandma’s driveway and play in the mud – there was a lot of clay in the soil – so, I would make little pots.” She started high school in public school, but soon found that she wasn’t getting enough artistic stimulation there. Wagner then transferred to Interlochen Arts Academy, which allowed her to focus on art all day long, and learn skills that most people don’t learn until college. She initially focused on ceramics and, in college, developed a passion for blowing glass.

At the College for Creative Studies in Detroit, she took a glassblowing class. “I ended up falling in love with it,” she says. “Instantly, I knew that I had found the material I enjoyed working with most.” She graduated with a Bachelor’s of Fine Arts in 1996.

“I approach the glass as a very organic material in the sense that it is alive.”
APRIL WAGNER

In 1997, April began building Epiphany Studios in Pontiac – the largest, private, hot glass blowing studio in the Midwest. The studio is very elaborate, and has a large and sophisticated reheating chamber, which is vital when sculpting Wagner’s larger pieces, as well as different tools to manipulate colors in the piece. “I am very proud of the fact that the studio is self-sustaining and that I have been able to have this career,” she adds. 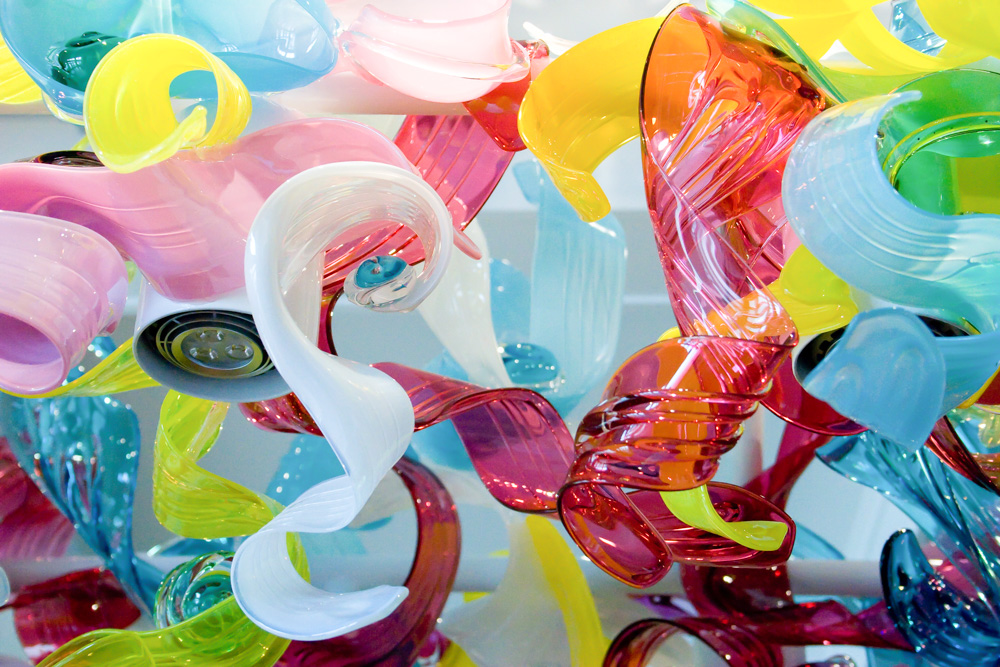 Le Jardin pour Enfants on display at the FIM. 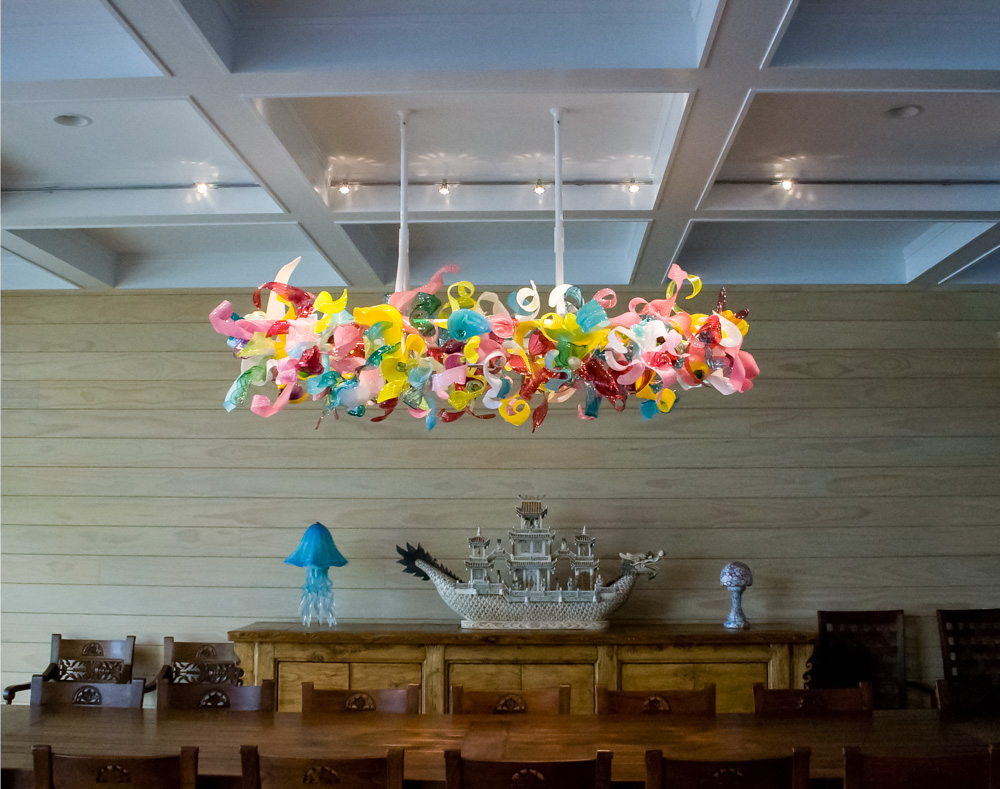 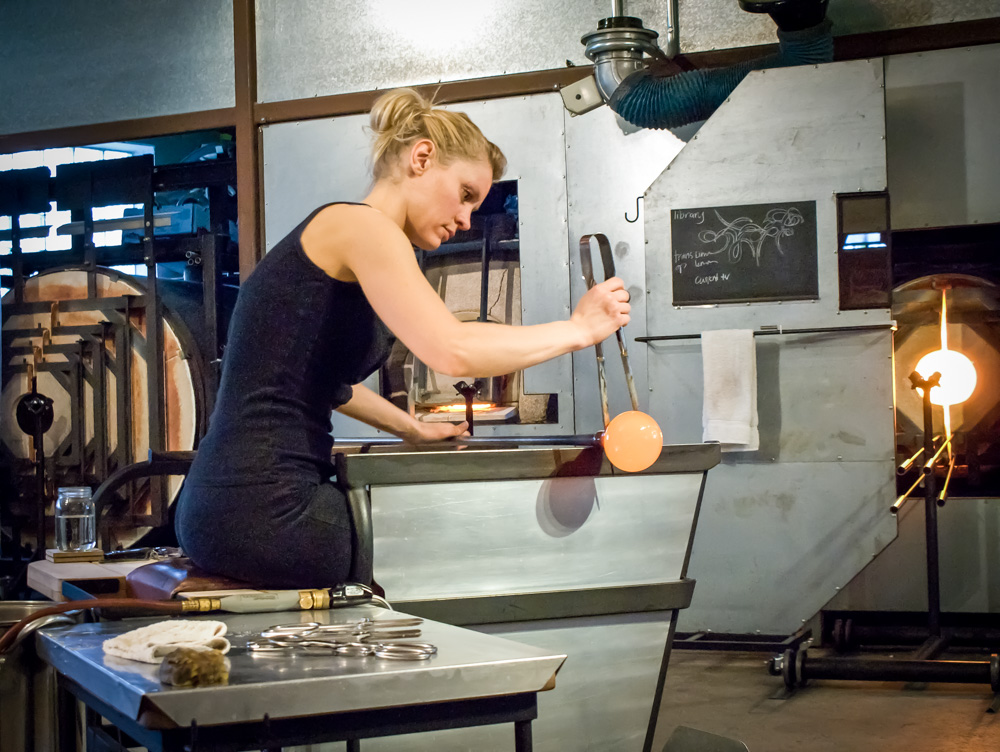 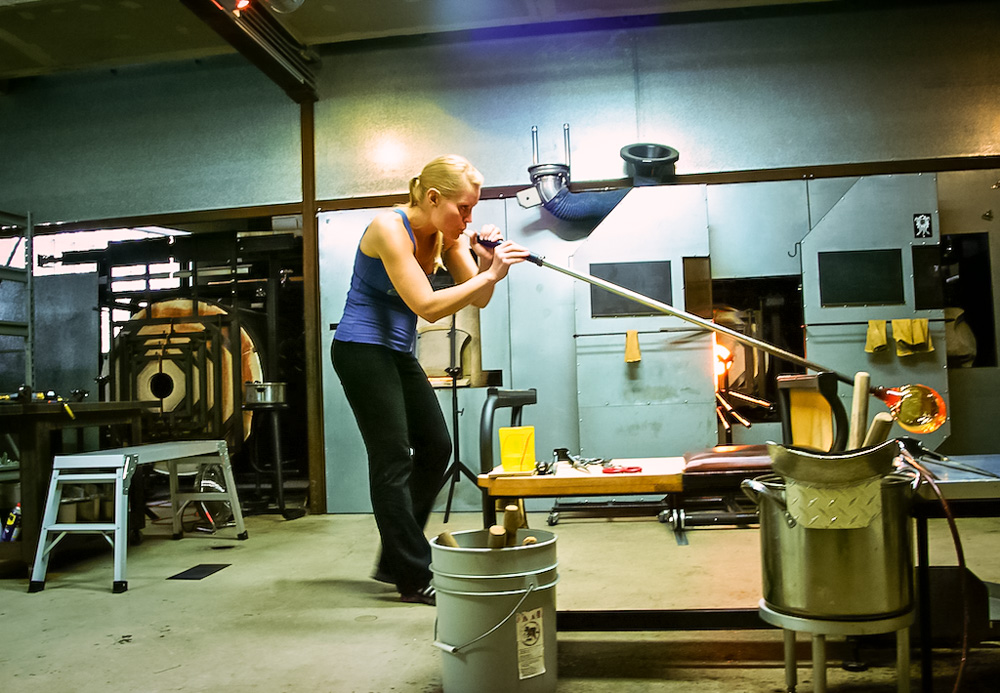 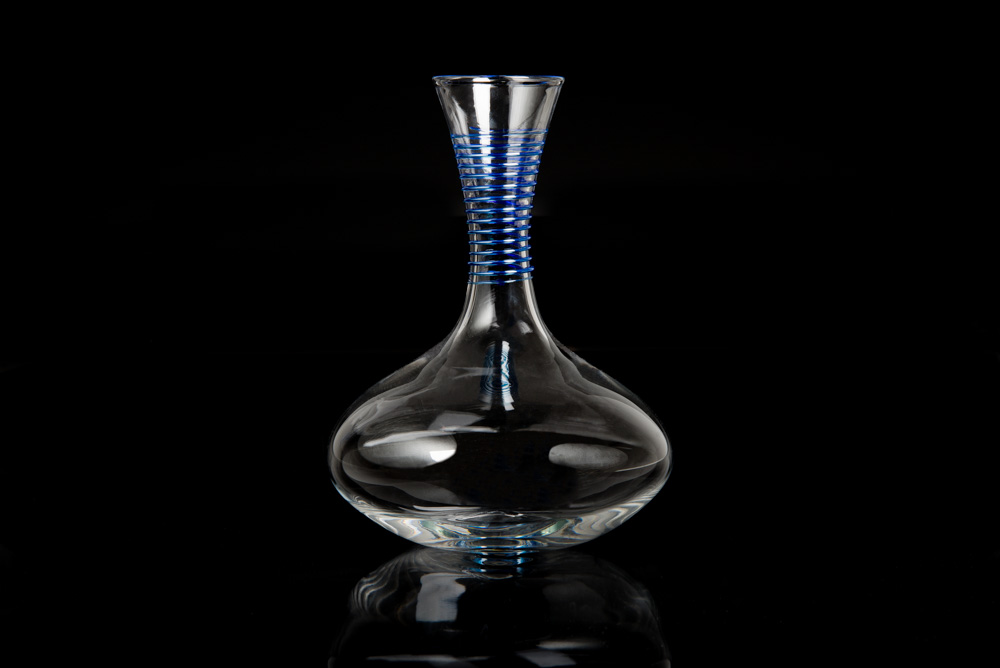 In 2003, April began creating large scale, one-of-a-kind sculptures and found the demand for them so overwhelming, that in 2010, she shifted her focus almost entirely to creating sculptures. In addition to the large scale pieces, the “Studio E” collection pieces sell for considerably less – perfect for gifts. One of her largest public projects was a 15-by-15-foot wall sculpture, Current Leaves, commissioned for the atrium of the Midwest Medical Center in Dearborn. Currently, her largest piece is 20-by-20 feet.

Wagner’s work is shown in over 300 galleries worldwide, and is featured in numerous public, private and corporate collections, including GM, Pfizer, Strategic Staffing Solutions, The Townsend Hotel, Hyatt Mauii Resort, and The Four Seasons Resorts. In 2005, April was featured as one of Crain’s Detroit Business “40 Under 40” honorees. 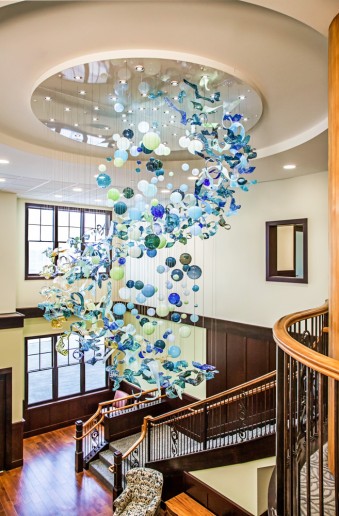 L’eau d’Vie, suspended over the lobby of the Inn at Harbor Shores in Saint Joseph, Mi.

Wagner’s work is a contemporary twist on the ancient fazzoletto technique, which was mastered by Italian glassblowers in the 1930s. Fazzoletto (meaning “handkerchief” and referring to the folding of the glass) is blown in a free-form manner, in addition to using complex color theory and no molds. “Glass is a really captivating material,” Wagner says. “It’s very hands-on. You don’t learn it by looking at it; you learn it by getting in there and doing it.”

Much of what Wagner does during her process is assembling a few separate pieces that end up being put together. As she creates, she sees what’s working and what’s not, which helps her decide what direction to go. She pulls reference images of flowers and leaves, noting the salient and interesting features of those images.

“I’m not trying to do something representational,” she explains. “I’m trying to capture the essence of what that thing is.” Her ideas are inspired by nature or natural forms, even her interests in landscaping and gardening. Not only does she capture the essence of natural items, her work relies on natural processes when shaping the glass: gravity, centrifugal force, temperature, and time. Most of her work is done while the glass is still hot.

“I approach the glass as a very organic material in the sense that it is alive,” Wagner says. “It has really interesting characteristics, not like any other material. It’s clear, colorful, shiny – it’s fragile, but strong. It has all of these opposing, inherent traits that I think is what makes it so exciting for people to look at it. It’s very sexy to look at.” 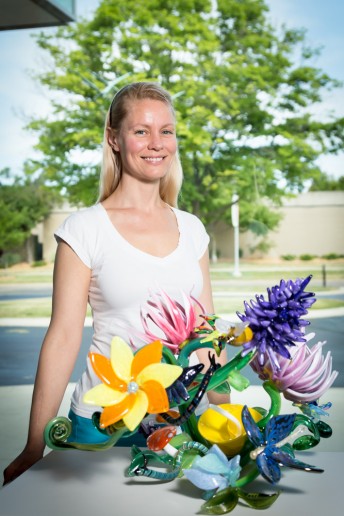 Wagner is continually learning from the material, seeing what it does and responding to it. “There isn’t a recipe book,” she says. “If there are 50 steps in a piece and you change numbers 26 and 27, it could change the whole outcome. Glass is very responsive. I don’t have to wait a long time to see how it turns out.” Along with color theory, line quality, shape and form, Wagner tries to design with the glass and make adjustments if needed.

The process is much easier with the help of her studio assistants. Larger projects – from concept to display – can take 12 to 16 months and include engineering, architecture considerations, transportation, and welding the final pieces together. The team communicates, and all help make Wagner’s vision come to life. “It’s very interesting to have the dialogue, because everyone brings a unique set of skills,” she says.

In the meantime, Wagner will continue to think big, and work on creating large installations for public spaces. “My favorite piece is the next piece,” Wagner shares. “I’m more interested in the process than the final product,” she says, adding that she feels grateful. “I feel very fortunate that people are receptive to my work.”