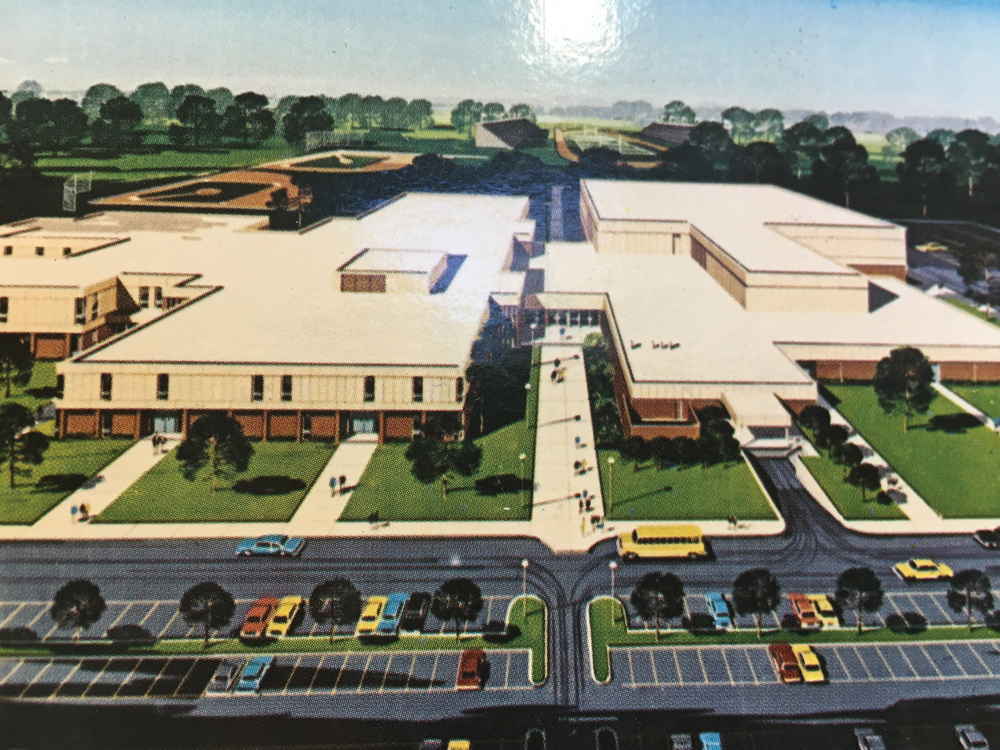 Fifty years ago, a decision was made to build a centralized Catholic high school in Flint, replacing and consolidating seven smaller high schools: Holy Redeemer, St. Agnes, St. John Vianney, St. Mary (Flint), St. Mary (Mt. Morris), St. Matthew and St. Michael high schools. The centralized school was named after Father Luke M. Powers, a pastor at St. Matthew Catholic Church, in recognition of his long ministry to the people of Flint.
Powers Catholic opened its doors at the original Carpenter Road location with 1,485 students in the fall of 1970. Students from across the former seven parochial schools came together as one family. The school soon became a powerhouse in Genesee County. As finishing touches were being made to the building, students voted on school colors, the Charger mascot, and began a legacy that continues today. 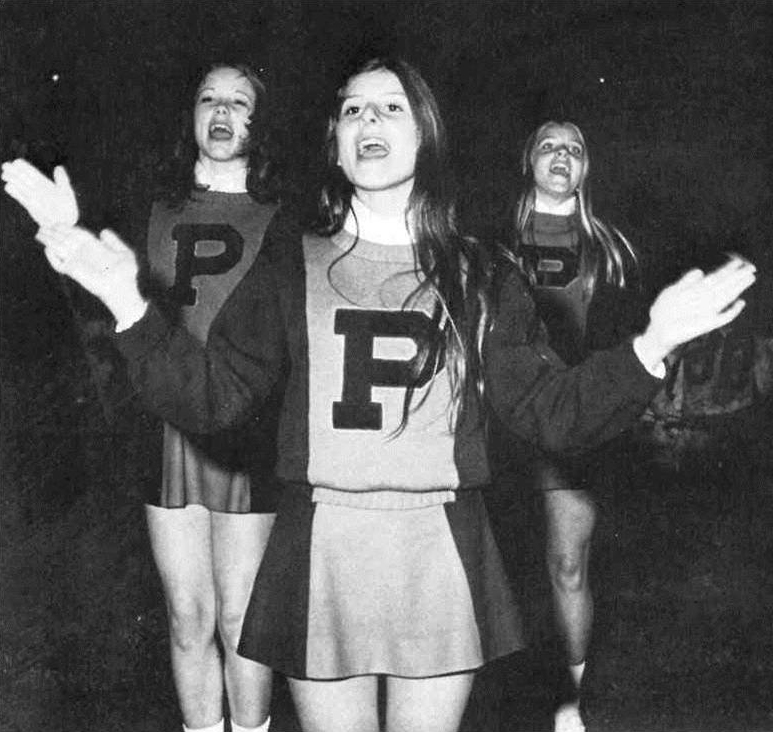 Larry Long, the school’s first principal, was excited to be a part of the energy that fall. “It was my great honor in 1969 to be named the first lay principal in the Diocese of Lansing and to be the first principal of Powers Catholic,” he says. “Hiring our staff of over 70 laypeople and religious orders was some task. I watched Powers being built brick by brick.”
Joe Forlenza was a longtime Powers principal, leading as the heart of the Charger Family for generations. “I know for myself and my family, along with many of the ‘original’ staff, we were committed to making Powers Catholic a success.”
Powers has always been committed to passing on the faith in an environment of excellence and to graduate students who are spiritually prepared to impact the world for Christ. Its structure remains rooted in traditions of diversity, academic rigor, family, and opportunities for students to flourish outside of the classroom. 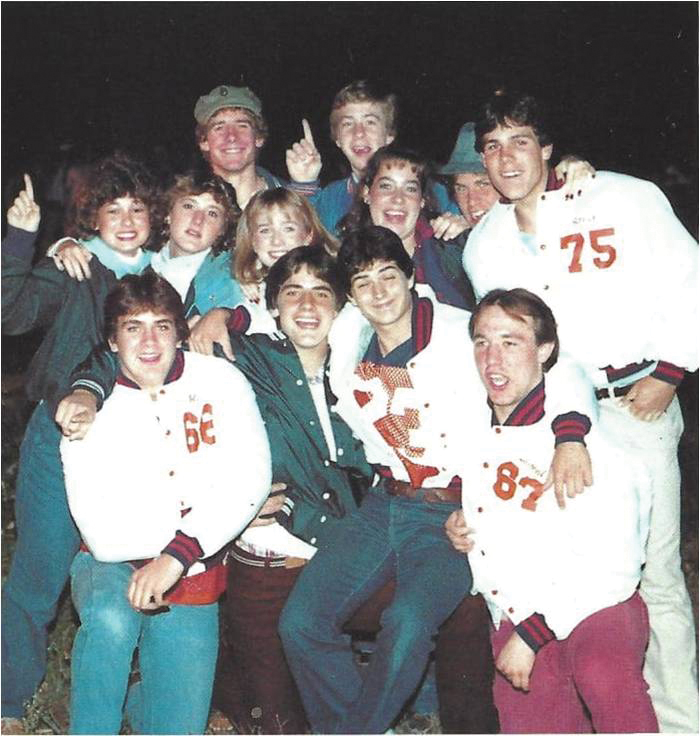 “The school was proud to be a part of the redevelopment of the City of Flint and to be known as the ‘Beacon on the Hill.’” 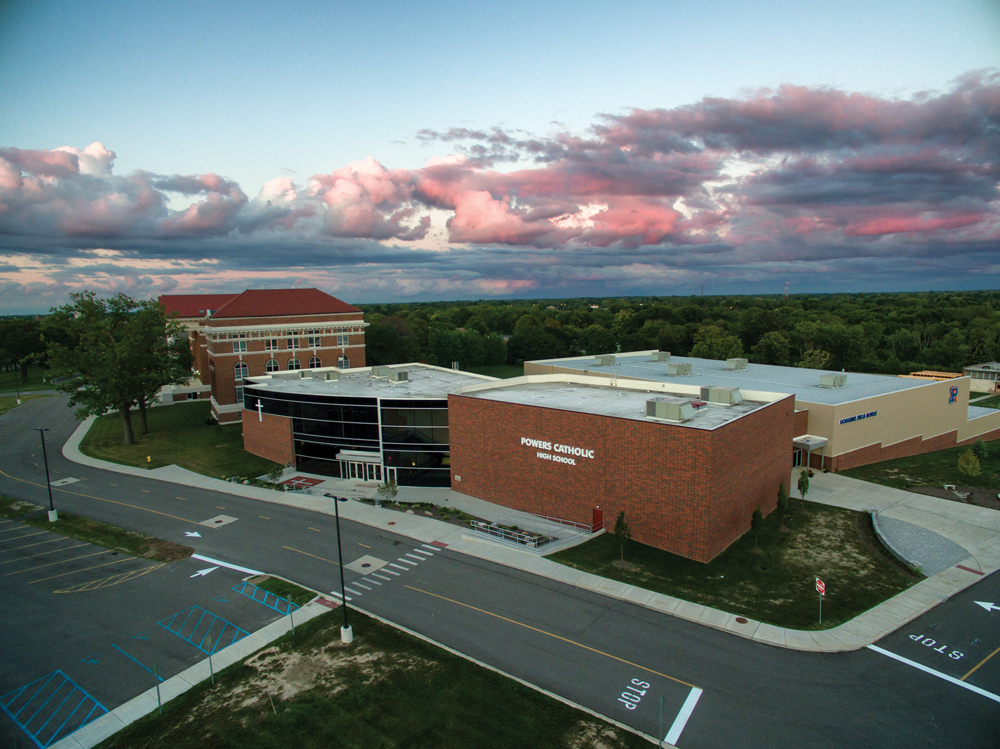 For several years, Powers had been searching for a new home, hoping to find a more centralized location for its students and in 2013, the school moved from its original location to its new home at the former Michigan School for the Deaf. Powers considers itself blessed to have found its home on Court Street, at the heart of the Flint community.
The former Michigan School for the Deaf building went through a renovation process which promised to maintain its historical significance. Tom Furnas, Principal of Powers at the time, told My City Magazine he was ecstatic about the location. “I love that it is in the center of Genesee County. Now that we are a citizen, we are going to be a contributor to Flint’s resurgence,” he shared. The school was proud to be a part of the redevelopment of the City of Flint and to be known as the “Beacon on the Hill.”
But saying goodbye to the Carpenter Road school, which carried so many memories, was bittersweet. Always intertwined with new beginnings are sad goodbyes. In April 2013, alumni, parents, students and friends gathered together to bid farewell to the school at Powers Catholic’s Last Party. 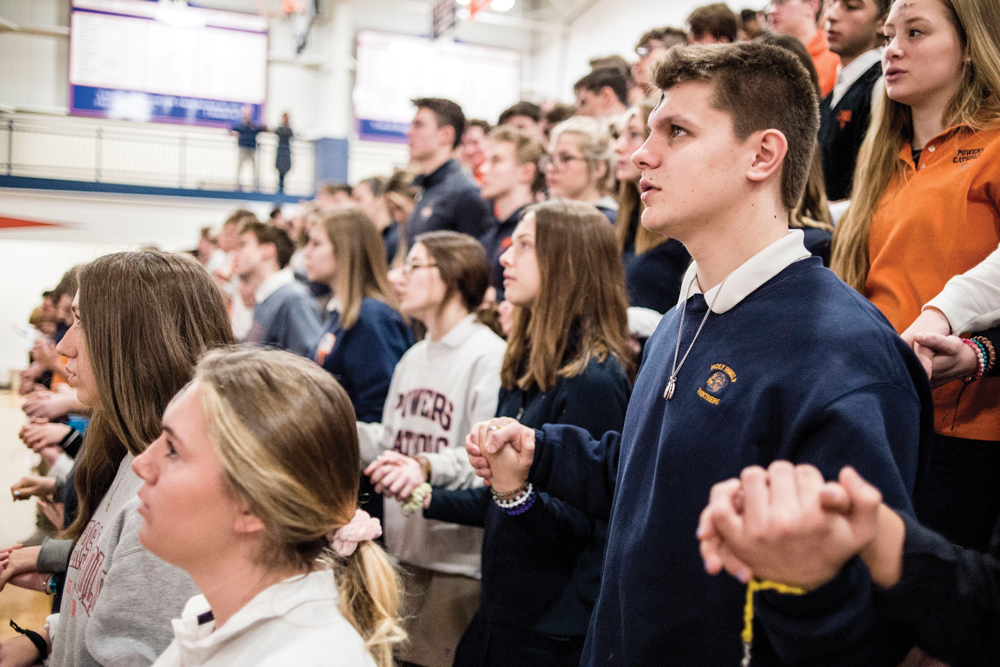 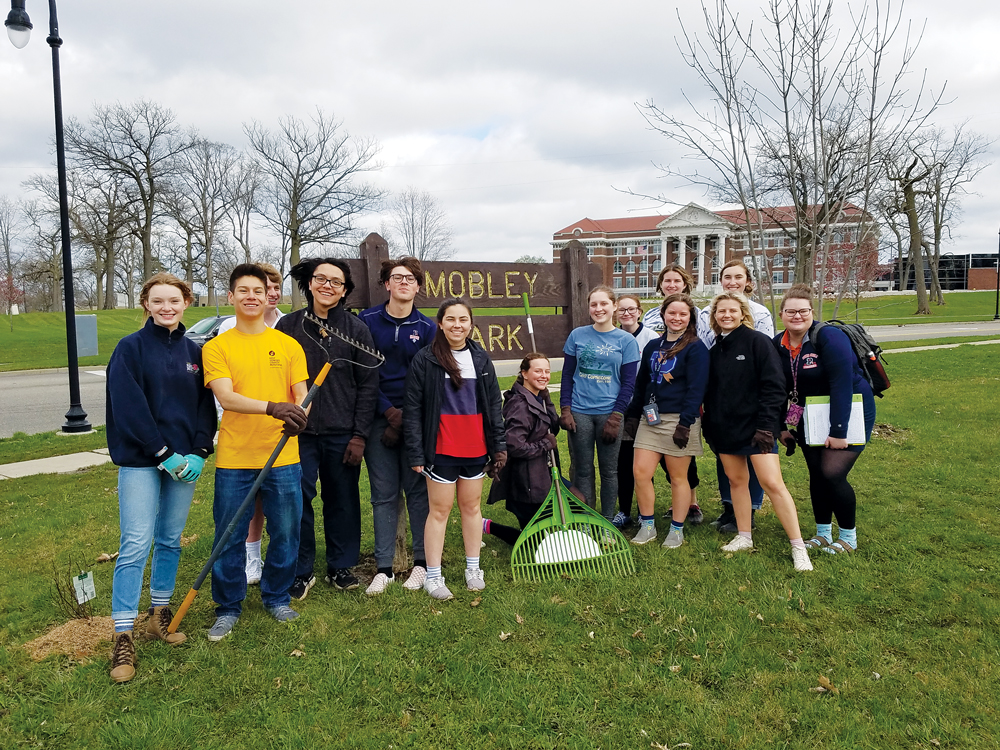 The long-awaited day had finally arrived and by all accounts, September 5, 2013 was a good day for the community. Hundreds of supporters, family members, alumni, business owners, local and church officials, students and educators gathered for the dedication and blessing of the campus on Miller Road. Former Flint Mayor, Dayne Walling, addressed the attendees: “Thank you on behalf of the city of Flint for bringing this campus back to life again,” he said at the dedication. “This project is a beacon of the positive spirit of renewal.”
Dr. Kathy Kirtek, President of Powers Catholic High School’s Board of Directors at the time, presented Bishop Boyea with a key to the school, thanking him for his staunch support. The Bishop then travelled through the halls and sprinkled the chapel with blessed water. “God wanted us to be in this building!”

Powers Catholic High School now has students from eight counties, 41 cities and 38 parishes, making it Michigan’s largest co-ed Catholic high school. Nearly 50 percent of students receive some form of tuition assistance, which is made possible by area parishes, alumni, families and area parishioners who seek to ensure that every student has access to a Catholic education. Graduates have earned over $40 million in college scholarships over the last five years and over 90 percent of Powers’ students are involved in some sort of sport, club or student organization. The school has over 10,000 alumni.
Much of the school’s success can be attributed to the hundreds of alumni that have stayed committed, according to Alumnus, Andy Goggins. “Much love and thanks goes to the alumni, families, parishes and community friends who have helped us to serve our mission over the years,” he says.

“It is gratifying to see each new generation of faculty, students, alumni and benefactors continue to add to the growth and tradition,” says Joe Forlenza. “Congratulations and let’s do 50 more!”
Gerald Snodgrass III is currently a senior at Powers. Both of his parents, mom Marie and dad Gerald II, are alumni. He joined his parents in celebrating this 50-year milestone. “The highlight of attending Powers has been being mentored by and creating relationships with upperclassmen,” Gerald says. “Not only have I created lasting friendships, but it has also helped me learn how to lead now that I’m a senior.”
According to Rory Mattar, President, Powers Catholic High School’s 50 years of existence did not happen without a tremendous amount of work and dedication by many committed stakeholders over the course of this milestone. “The planning, organizing and sacrifice made by so many represents the foundation upon which Powers Catholic was built,” he shares. “The purpose of the school 50 years ago was to continue providing families throughout Genesee County with a quality, faith-filled Catholic education and that purpose still exists today. We have been blessed to serve our families and communities for the past 50 years and by the grace of God, we will continue our journey of service and education for many more.” 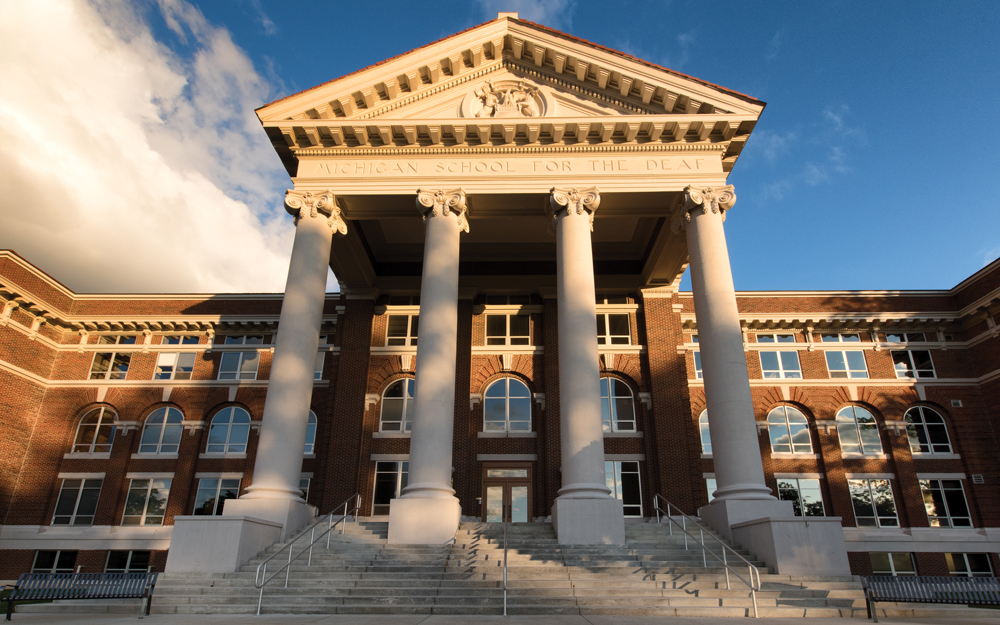 So, what’s in store for Powers Catholic High in the next 50 years? Fr. Jim Rolph has been the Chaplain of the school since June 2017. “In my time at Powers Catholic High School, I’ve seen that we have opportunity and what it means to raise up a generation of servant leaders,” he says. Father Jim believes that communities don’t just need programs, they need men and women who are invested in the people of a community. “So often, we see leaders who are invested in themselves and their own interests,” he asserts. “Our goal is to raise up a generation of servant leaders who put others ahead of themselves so as to truly transform the communities in which they live and work.” Part of that next generation of servant leaders is current Powers Catholic Senior, Jolie Brochu. Jolie, who transferred to Powers in her freshman year of high school, shares, “I am forever grateful to Powers for the school helping me discover my faith, which is now one of the most important facets of my life.”
According to Principal Sally Bartos, understanding where they have been is a good guide to understanding the limitless possibilities of where they can go. “The past 50 years have been a journey,” she says, “and, while I was not one of the original crusaders who forged Flint’s first Catholic consolidated high school, I have been blessed to hear many of the stories from the men and women whose tireless work not only made it possible, but also made Powers Catholic great.” Bartos points out that the one common thread in the stories of the past and of where they currently are centers around the very definition of community.
“Powers Catholic has never been defined by one individual, but rather a group of people, staff, students, parents, alumni and supporters who rally around the common good,” she says. “Our goal is to personalize, as much as possible, every student’s high school experience so that they can reach their God-given potential.”
Share. Twitter Facebook Google+ Pinterest LinkedIn Tumblr Email
Previous ArticleWe Need a Little Christmas!
Next Article Music is Food for the Soul! Violinist, Alesia Byrd Johnson