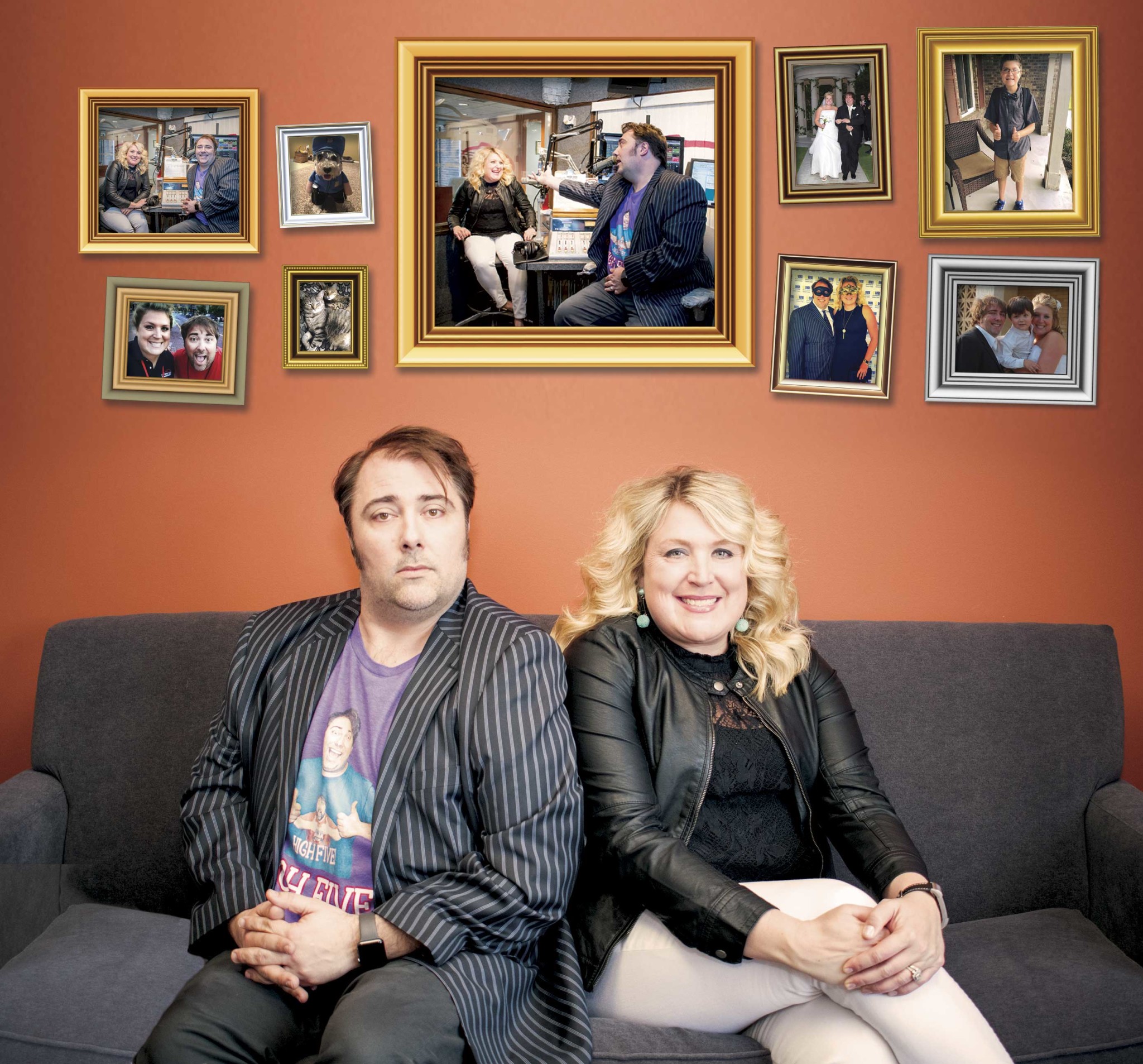 If you listen to WCRZ (CARS 108 FM) between 6-10 am, you’ve probably heard local married radio hosts, Pat and AJ, talking about life in between your favorite adult contemporary tunes.

And they’re talking about real life.

Since their arrival at the station in 2014, Pat and Jenny (better known as ‘And Jenny’ AJ) Clark have been dealing with “real life” both on and off the air – balancing their careers, 11-year marriage, sleep schedule, raising a son with autism, and sharing space in their eight-by-eight studio at Townsquare Media in Flint.

“We talk about issues that matter to people,” says Pat, a self-admitted news junkie, which comes in handy when planning show topics. “We’re not all about sunshine, rainbows and cotton candy when we’re on the air.”

“That’s right,” AJ agrees with conviction. “We remind our listeners that it’s okay to be not okay. We talk about mental illness, drug addiction, eating disorders, anxiety, gun control, autism – real things that real people deal with every day.”

Recently, Pat’s mother, who suffered from Alzheimer’s disease, passed away. “I was on the air talking about the difficulty of picking out a casket, the cost of funeral expenses and how I might need therapy because I just buried my mother,” he shares.

Calling the show and tweeting their sympathy, Flint listeners offered Pat encouragement and expressed how they could relate to his loss and grief. They also rejoice, understand, celebrate and relate to the radio hosts because they opt to be frank and open about what life throws at them, rather than hide it or talk about topics pushed by management, which is often the case at other syndicate-based stations. 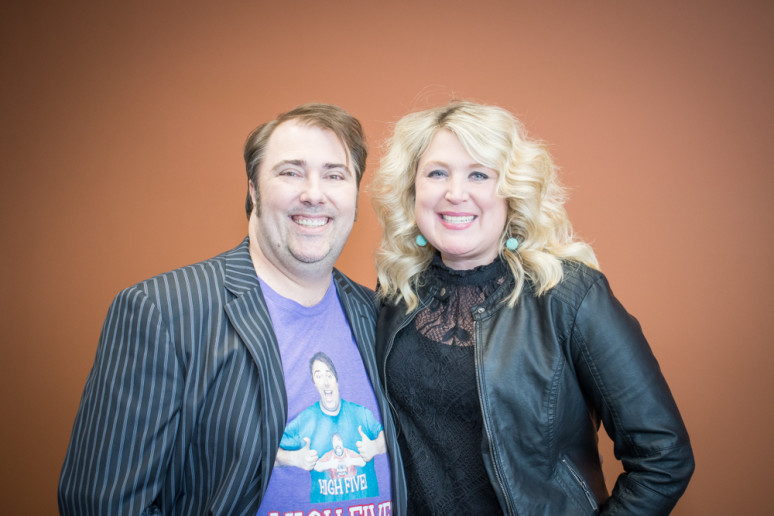 Mostly though, the wide-ranging radio duo enjoys “kicking off the day, chilling with our listeners and basically, just trying to get through life with them.”

The couple, who met a little more than a decade ago at a Wisconsin radio station – Pat was an established on-air personality and AJ was a paid intern just learning the ropes of radio life – have built their successful brand here in Flint.

“I remember thinking she was cute and I’d like to do a radio show with her one day,” recalls Pat. AJ confesses she was oblivious to his interest and thought it might be a joke.

“It wasn’t a joke,” she laughs. “We met in March, and in December, we were married and had a child together.” Since then, they’ve relocated several times, adjusting to new towns, employers, audiences and routines.

Having some normalcy and a desire to stay put is something new, but that’s what CARS 108 provides the Clarks, who recently received a Merit Award for Best Personality by the Michigan Association of Broadcasters.

The CARS audience and management are like family – which ironically, Pat and AJ didn’t often encounter on their journey around the country doing radio gigs in places like Seattle, Green Bay and La Crosse, Wisconsin before landing in Flint four years ago. Offers from Phoenix, Colorado, Minnesota and Erie, PA were all possibilities before Flint – but, they don’t regret their choice.

Their Flint fans embrace Pat and AJ with sincerity and appreciate their spunky, humorous and engaging style. 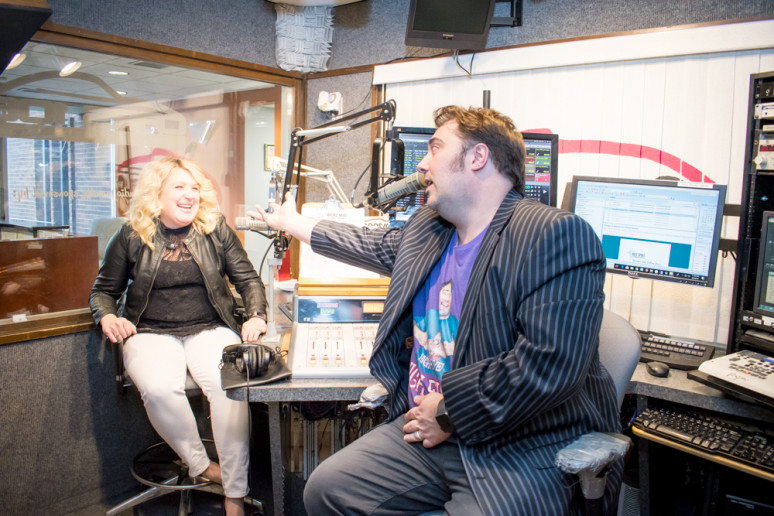 “We’re glad Flint fell in love with us,” says Pat. Originally from Chicago, Pat attended Columbia College where he earned a bachelor of arts degree with a concentration in radio. “Because, honestly, we fell in love with Flint,” he continues. “The people in Flint are good, hardworking and honest people who just want a fair shake in life. We’re here on the air, alongside them, going through the ups and downs of life together.”

“We’re really fortunate here in Flint,” says AJ, a Milwaukee native who earned a bachelor’s degree in journalism and theater from the University of Wisconsin. “Being live and local is rare. So many bigger market stations direct and manage every word spoken. We’re grateful they give us the creative freedom to be us. We get to be us.”

Before Flint, Pat and AJ approached their on-air work in a spontaneous and random manner. “We would just wing it,” says Pat. “And, ummm, that didn’t always work out so well.”

He elaborates how the radio industry streamlines like any other business. Radio shows and formats have changed through the years and it’s not uncommon for deejays to jump from station to station.

Their own list of reasons for leaving radio stations includes “being told the station was taking a new direction, or becoming a Spanish-speaking station, downsizing from two hosts to one, and budget cuts.”

Today, Pat and AJ mesh their industry experience and wisdom, and from that came a talent coach named Steve Reynolds. “Steve has helped us have better direction for the show,” says Pat. “He’s protective of who we are; meaning that he respects our personalities, and yet, he’s taught us some meticulous planning skills.” 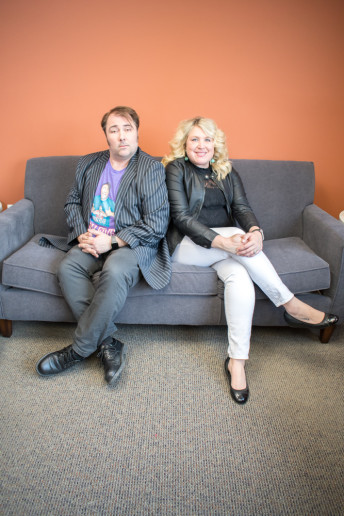 Reynolds works with eight morning shows in the Top Ten Markets. “I really admire those guys,” says Reynolds. “They’re authentic, fun, self-deprecating, and big, bold personalities. They’re the kind we don’t get to see often enough in radio. They’re easy to talk to and laugh with and have a complete self-comfort to be challenged to grow and look at what they do differently. It takes a unique person to do that.”

Reynolds helps them develop those skills and gets them to plan their on-air time in a way they never did before.

“Every night at 8:30 pm, we sit down and discuss what we’re going to talk about in the morning,” says AJ. “Throughout the day, we’re collecting ideas in our heads. Ideas come from who we might interact with, the news, experiences we’ve had or world events – it’s limitless. But we talk it out. We decide what we do and do not want to talk about. It’s a great process and it helps us, so we don’t waste valuable on-air time.”

Pat wants their CARS listeners “to get the most bang for their buck.”

“This station has a long-history of solid listeners,” says Pat. “We’re only the third morning show here, the previous one lasted more than 20 years. We’ve been building our local brand and we’re really thankful we are not puppets; we don’t have anyone handing us a paper to read on the air.”

The couple’s coverage of topics of substance appeals to their Flint area listeners and “they feel like they’re not alone,” explains Pat. In addition, they are intentional about talking “with” their listeners, rather than talking “at” them.

“We’ve heard other morning shows and the hosts are laughing at things listeners have no knowledge of, and sharing inside jokes,” says AJ. “It’s like they’re ignoring their listeners and it makes everyone feel excluded. We knew we never wanted our listeners to have that kind of experience.”

Pat and AJ’s on-air format intentionally includes their listeners. “We try and make everything conversational,” says Pat. “We’re not just talking to each other. There’s always a third person to consider in our conversation and that is our listener. We’re conscious of keeping them in the loop.”

Listen to Pat and AJ in the Morning from 6-10 am Monday through Friday. To learn more, visit wcrz.com. 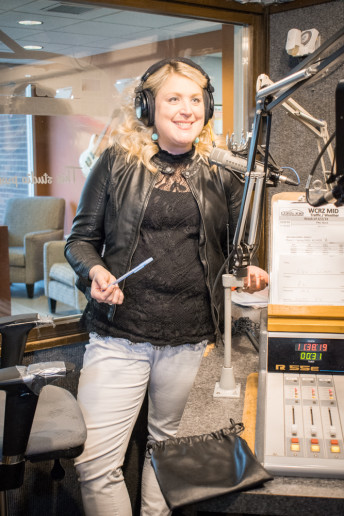 “Being live and local is rare. So many bigger market stations direct and manage every word spoken. We’re grateful they give us creative freedom. We get to be us.”
– Jenny “AJ” Clark