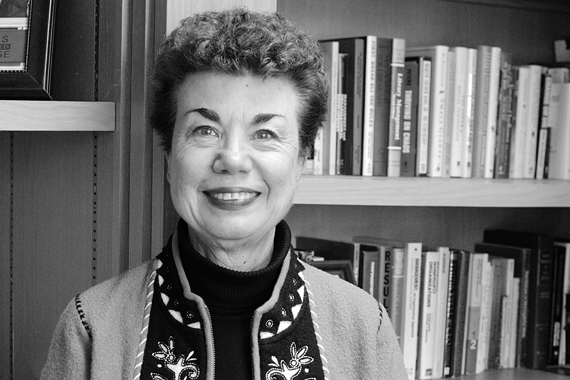 This June will mark the 6th anniversary of Dr. Ruth Person’s appointment as Chancellor of the University of Michigan-Flint. It will also mark the end of her service at this post. Since 2008, Dr. Person has been the figurehead of UM-Flint, and as she parts from the office of Chancellor, My City was privileged to hear her reflect on her accomplishments, offer parting words for her student body and discuss what’s in her future.

To better understand the gravitas of Dr. Person’s legacy, it should be understood that the office of chancellor is one of great importance for both the university and the community. Whoever should endeavor this office is charged with directing the institution toward bright horizons with a firm hand, while also representing the institution before the public with grace and poise. Dr. Person has proven herself well in each category. Early in life, her tenacity and drive prompted her to take hold of opportunities that many would have passed up, and when she was appointed to Chancellor of the University of Michigan-Flint, she became the first woman to hold the position in the institution’s history.

While at the helm of UM-Flint, Dr. Person has undertaken and completed bold new projects and advancements unmatched by previous eras of the university. Evidence of her effective leadership is the university’s growth rate: the past decade has seen an enrollment increase of nearly 40 percent, an incredible feat considering the falling numbers of high school graduates as a result of statewide population decrease. As one of Michigan’s fastest growing academic institutions, nearly 9,000 students march the halls and skywalks of UM-Flint with each passing day. Dr. Person has encouraged this enrollment trend with the development of housing accommodation for these students. The First Street Residence Hall opened just three months after Dr. Person’s installment, and while not her brainchild, it has been her baby. She has been loyally committed to a staff of forward-thinkers who have brought about new projects on campus and citywide that have made UM-Flint more attractive to potential students.

Many are taken aback when they hear these numbers and accomplishments. Other institutions hoping to replicate such growth often seek out the innovators at UM-Flint and Dr. Person herself in search of a “silver bullet,” as she describes it. Her advice is cautionary: “The growth of a university is intricate and multilayered, and many factors must be carefully considered. It is important to move slowly and steadily toward a vision.”

Apart from work with UM-Flint, Dr. Person also sits on the Hurley Hospital Board of Trustees. While admitting that the many responsibilities can be time consuming, she says, “I enjoy the opportunity to engage the Flint community beyond the academic realm.” She is a woman of laurels in several disciplines, but even after amassing an impressive list of accomplishments, Dr. Person is not so prideful to think that she managed this all on her own. She acknowledges gratefully all the help she has received along the way. As her desire has always been to aid students, she leaves the student body with these words, the best advice she can give to undergraduates preparing to take life head on. Dr. Person states, “I wouldn’t let you think for a minute that at the age of 22 I had figured out a trajectory. My wisest suggestion to students is to be as open to opportunities as you can be. Don’t ignore them. If you are closed off or too set on a track, things will often pass you by. Don’t overthink things.”

Thorough planning, combined with flexibility when new opportunities arise, has been the making of Dr. Person’s successful career. Like her immediate predecessor, she has decided to return to teaching after her chancellorship expires, calling her reentry into professorial life an exciting opportunity to “get back to the basics, and reconnect with students on the front lines of education.” As she prepares for a new chapter in her career, she fearlessly acknowledges that her plans are not set in stone. Beyond taking a sabbatical from May through December and teaching in the university’s business school beginning January 2015, she has no set plans. “I’ve decided to take my own advice and see what opportunities present themselves. Right now, I’m not ready to plan more than five years into the future.”

With that, the age of Chancellor Person comes to a close, but it will not be forgotten. Congratulations are due to this determined woman, and Flint wishes her the best of luck in her next half-decade, knowing she will pursue all the unknown opportunities waiting therein.