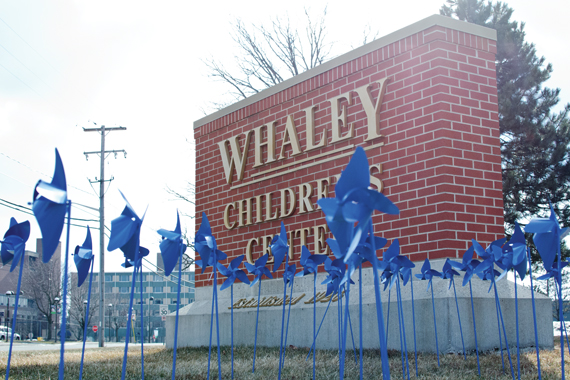 It’s something we don’t like to talk about or even think about, but child abuse and neglect are problems far too serious to ignore. In Michigan, the numbers are staggering – in 2012, there were 33,434 confirmed cases of child abuse and neglect, and 2,200 of those children were from Genesee County. Last year in Genesee County, 35 children under the age of five were brutally and critically injured at the hands of abusers or due to neglect; six infants under the age of two died from abuse. But some Genesee County residents are willing to face the issue head-on, and they have a hopeful vision for Flint – a city without child abuse.

As part of a local effort, 50 community leaders and advocates recently gathered for a roundtable discussion about the effects of this issue. Facilitated by Whaley Children’s Center, the event’s attendees included judges, church leaders, business leaders, members of the Sheriff’s Department, doctors, educators, non-profit organizations, the finance sector, private foundations, the director of DHS, and politicians. “To have that level of diversity was truly refreshing,” says Kevin Roach, President and CEO of Whaley Children’s Center.

The first step toward solving any problem is raising awareness of its existence. Kevin believes that much was accomplished at the roundtable, and he hopes that this meeting will guide people of all community sectors to take ownership of the issue and protect those most vulnerable to its effects. “Our community is only as great as the children who thrive in it,” he said somberly, adding that there are very few abused children who keep it to themselves. The second step to solving the child abuse epidemic is to report it. Many times a neighbor, grandparent or classmate may suspect abuse. “If you suspect it, you must report it,” Kevin says.

April is Child Abuse Prevention Month, and cities all across the U.S. are participating in a public awareness campaign called Paint Our Town Blue. Whaley’s Director of Development, Katrina Khouri, says that Genesee County has never been involved in an awareness campaign, so the Center stepped up to the plate and joined the movement to help end child abuse and neglect. She said that local media sources will be doing public service announcements in April, and awareness efforts will include Wear Blue Day on Friday, April 11. On March 28, a press conference was held during which 63 Chinese lanterns were launched in Downtown Flint in remembrance of the children of Genesee County who died in 2012.

The national symbol for child abuse prevention is a blue pinwheel – a reflection of hope, health and safety. At Whaley Children’s Center, a recently created pinwheel garden serves as a somber reminder of lives cut short. Katrina urges, “Please join the Paint Our Town Blue movement by becoming a Prevention Partner during the month of April.” Local citizens can support the effort by purchasing a pinwheel for one dollar or a wristband for three dollars.

“A society is best judged by the way it cares for its children,” says Kevin. Many roundtable attendees talked about how wonderful it was to grow up in Flint, and agreed that one way to see families continue to flourish here is to ensure a safe environment for children by addressing these issues proactively. And Kevin has a lofty goal: to see Flint named as one of the Top 100 communities in which to live. “How fantastic that would be!” he exclaimed. “But to make it happen, we have to ensure that every child is safe. We have to get people to light the torch, and step onto the path toward eliminating abuse.”