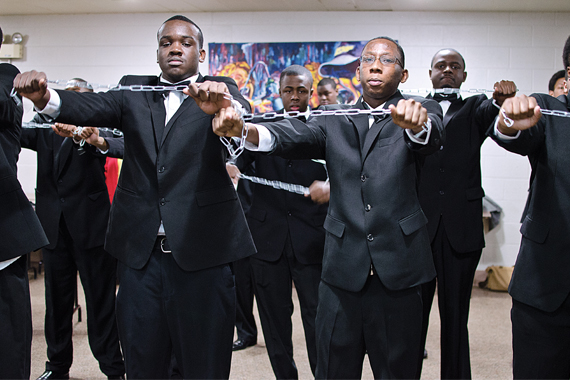 I remember a day as a high school freshman; I was finishing my homework after school as all good nerds do, when my mother and stepfather entered my room with good news.

“Since your grandmother is a Soros, you can be a Kudos.”

I’m sure my face was deadpan at the time, since this news was all Greek to me, and rightfully so since the two words are Greek words. Had I any prior background information, the news my mother and stepfather gave me would have sounded more like this:

“You know that high school group of successful, talented and disciplined young men that’s modeled after college fraternities? Well, Grandma is a sorority sister, which makes you eligible to pledge.”

“Ahh. Okay.” I would have said in return. “Well then, sign me up.” After all, there was a bit of social status that came with being a Kudos, and what high school freshman band nerd in his right mind would ever pass up the opportunity to have a little clout? None would. That’s the answer. But even without knowing exactly what my mom and stepfather were getting me into, I went along with the idea. I also didn’t have much say in the matter. So, I found myself having to turn up weekly at Gundry Elementary to practice oration, etiquette and, most fun of all, step routines. I and around two dozen other high school students were under the tutelage of Mr. John Rhymes, who was the principle of Gundry Elementary at that time and the director of the Gamma Delta Kudos and Kappa Leadership League groups.

John Rhymes embodies the American Dream, Dr. King’s dream, and he typifies the exemplary model of Christian and community leadership. Born the youngest of 12 children in Hazlehurst, MS, Rhymes’ mother died when he was only a year old and at just 14, he lost his father as well. He was then taken in by his aunt who couldn’t read or write. Knowing early on that he would have to determine within himself to be a success, he performed well in school and as he puts it, wasn’t asked “Are you going to college?” upon his graduation but rather, “What college are you going to?” Rhymes was accepted at Mississippi Valley State University. His aunt was only able to provide the money to buy him a bus ticket to Itta Bena, MS where MVSU was, but Rhymes got to campus only to discover that he was just short of the funds needed to attend class. He returned home dejected and while at church on the next Sunday, his pastor was shocked to see him.

“Why are you here?” The pastor asked Rhymes.

“I didn’t have enough money to take classes,” Rhymes responded. The pastor invited him to his office after service, where he would place a call to a man he knew at MSVU who could provide Rhymes a work-study job. Rhymes says that in his day, people really took to heart the concept that “It takes a village to raise a child,” as most were likely to help out in any way that they could.

After completing college, Rhymes phoned one of his sisters who lived in Flint. She agreed to have him stay with her and after a brief stint serving as a substitute teacher in the Flint Public Schools, he was later granted a contract to come on board as a full-time teacher in 1970, which was also the year in which he got married and was drafted to serve in the Vietnam War.

Just two years into his tenure with Flint Public Schools, Rhymes began mentoring youth. For three decades, he has taken it upon himself to guide young men in the direction in which they should go, equipping them with skills to help them succeed. His main goal has always been to get the students to become self-motivated just as he had to be as an adolescent. Rhymes’ drive and adherence to his elders’ rule of mandated college made him the only high school and college graduate of his siblings. He says in a lighthearted manner that he wanted to “save face,” which was enough incentive for him to see his studies through, and now, he works tirelessly to instill this same determination in local youth.

It’s always interesting to me to see the impact that a man has on his world after several years of service, and I’m sure it is just as interesting to the man himself. Although Mr. Rhymes had expected to give an interview for a magazine the day we met up last month, he did not expect for the interviewer to be me, one of his former mentees. His face lit up when he saw me, just as mine did. After speaking with him, I realized that by seeing me, he was graced with the chance to see the result of one of his investments from 16 years ago, and I am only one of many. Post high school, I have had the honor to become better acquainted with other former Kudos from years before and after my class. So many of us have done well in our educational and vocational pursuits, and we would be remiss if we didn’t credit much of our success to the discipline and instruction given to us by Mr. John Rhymes.

I met with Mr. Rhymes during his leadership class at Northwestern High School. I watched as the young men present had to stand with their hands behind their backs and introduce themselves with their name, age, their year in school and high school name followed by their personal life creed, all of which were things that I once had to do. Some did it well; some did it poorly, and I was once just as bad if not worse than those who did it poorly; but I reckon I’m quite adept with words and oration now, so I suspect that they will do well in time, too, but that is up to them. As we Kudos say, “If it is to be, it’s up to me!”

Thank you, John Rhymes, for believing in and investing in the futures of inner-city youth. I look back at my time as a Kudos with fondness, and you will always have a special place in my heart. Cheers!

See more photos HERE, or purchase photos from this story by going HERE and selecting the “John Rhymes” category.