On a blustery, spring day, Ashoka Rao holds back her hair as she talks about the purpose of rhythm in classical Indian dancing. “It’s a perspective,” she tells me. “With certain dances, the rhythm is different. Like with this wind,” as it lifts the corners of the paper dance recital program on the table. “Today, this wind is a mad dance of nature. But other times, wind can be peaceful.”

A oneness with nature is something she has learned from the centuries old artistic tradition of Classical Indian Dancing. 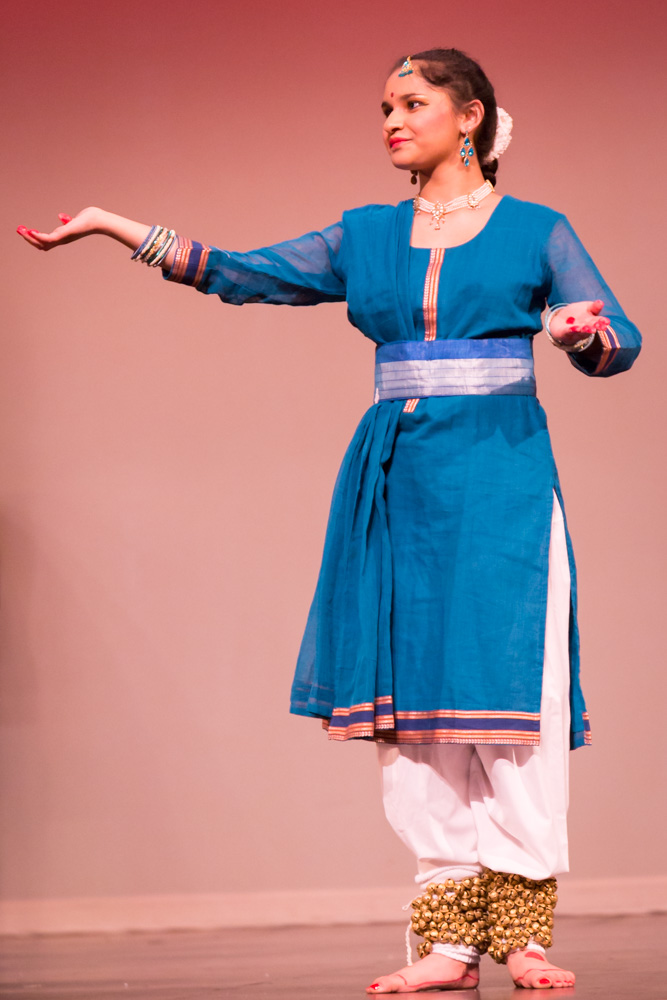 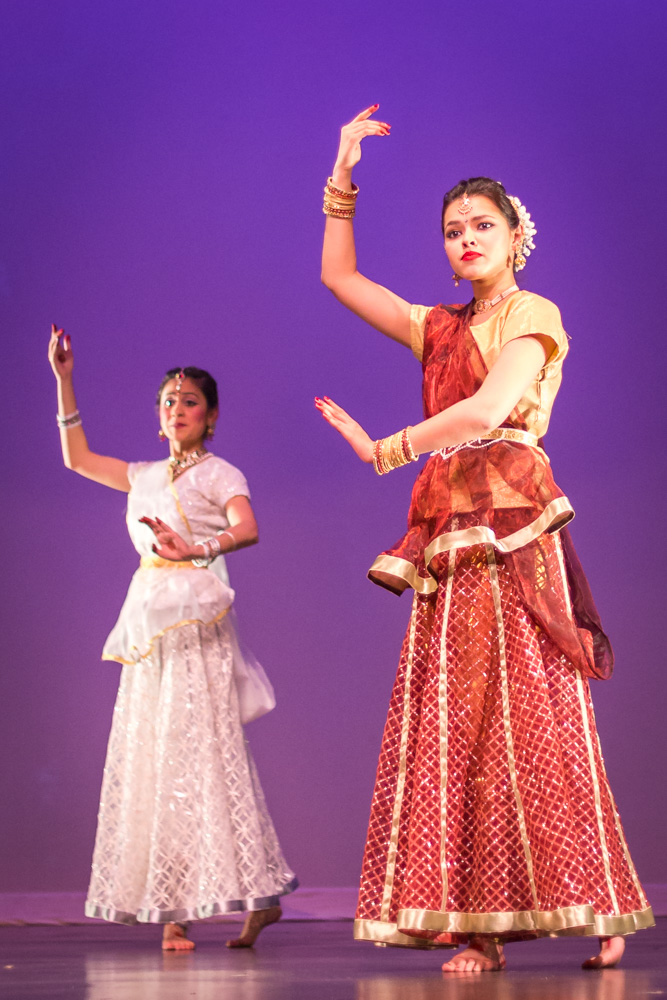 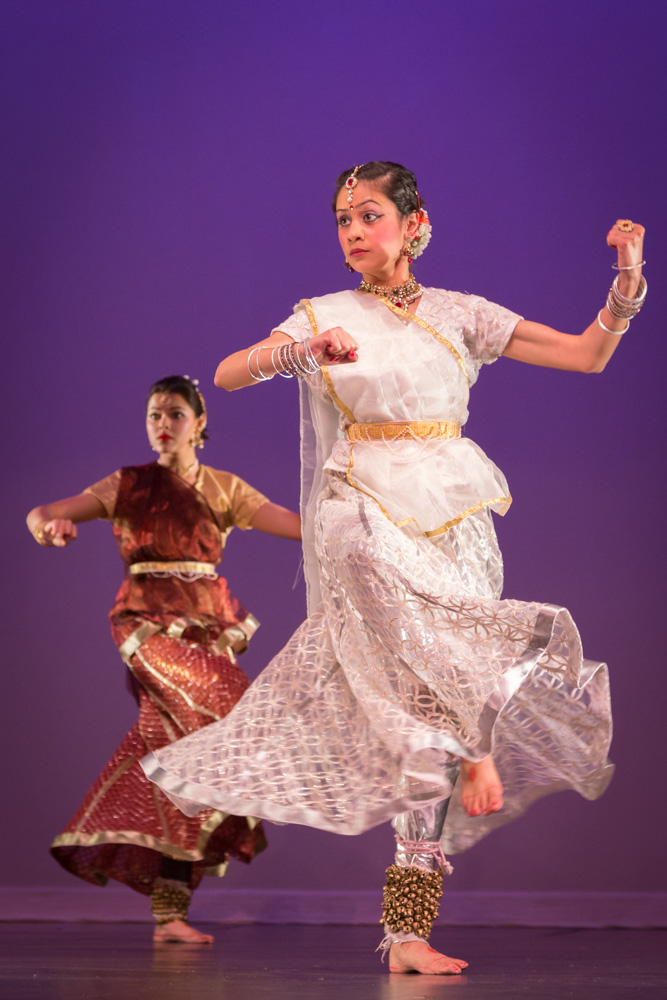 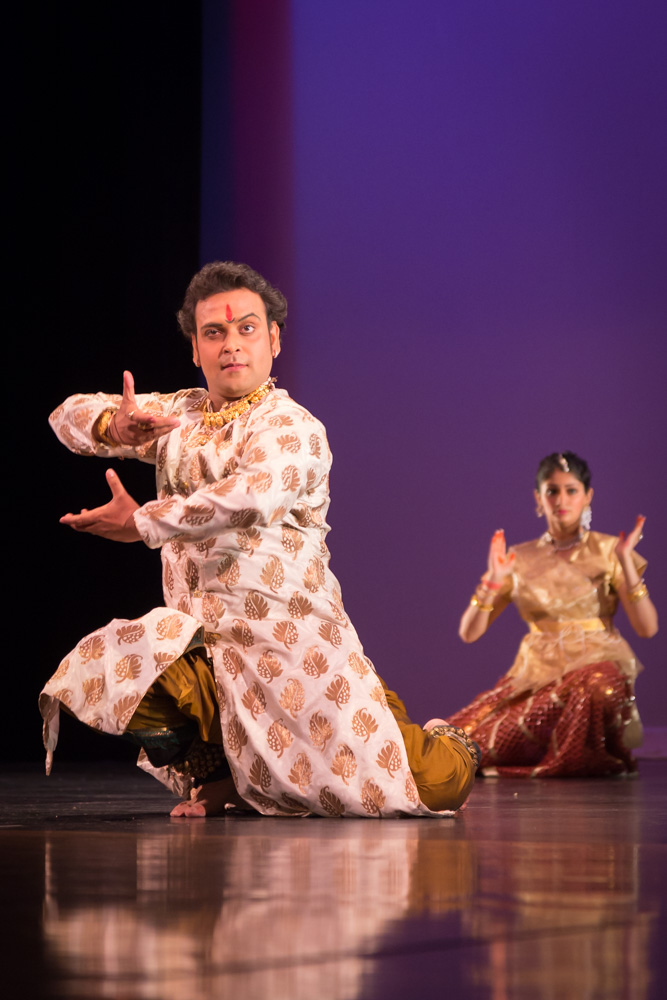 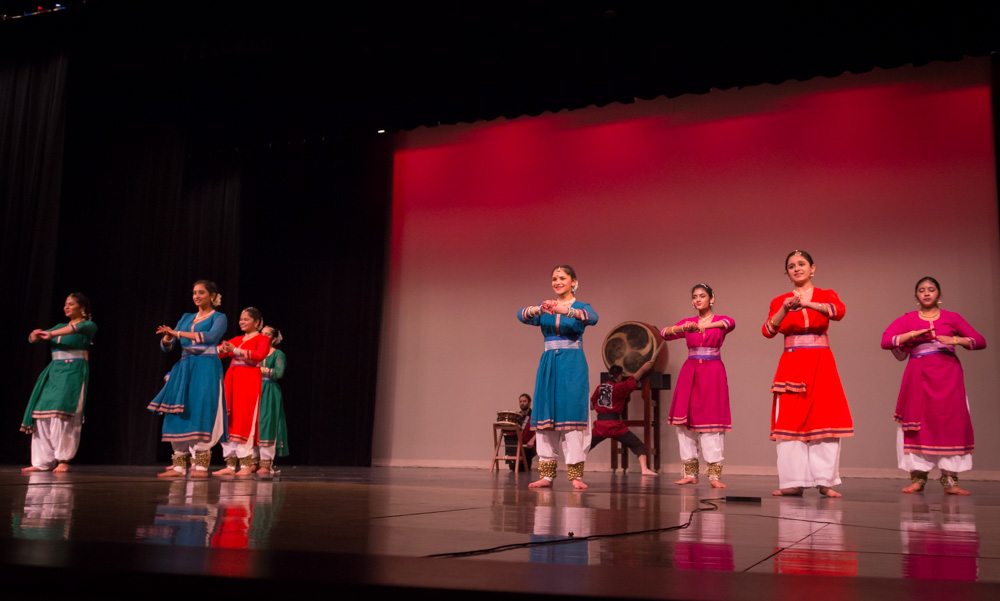 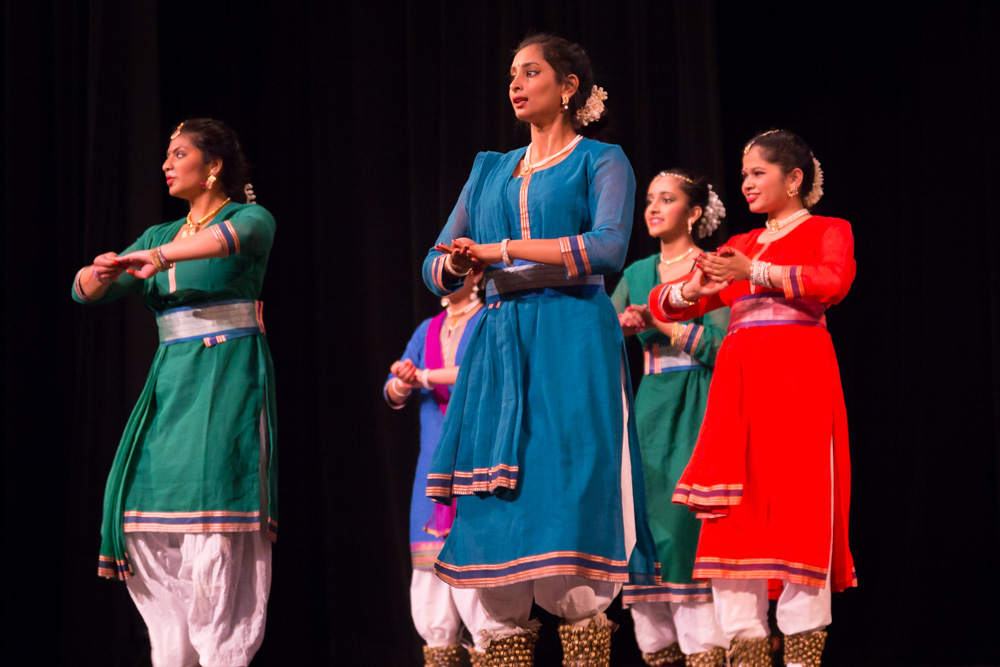 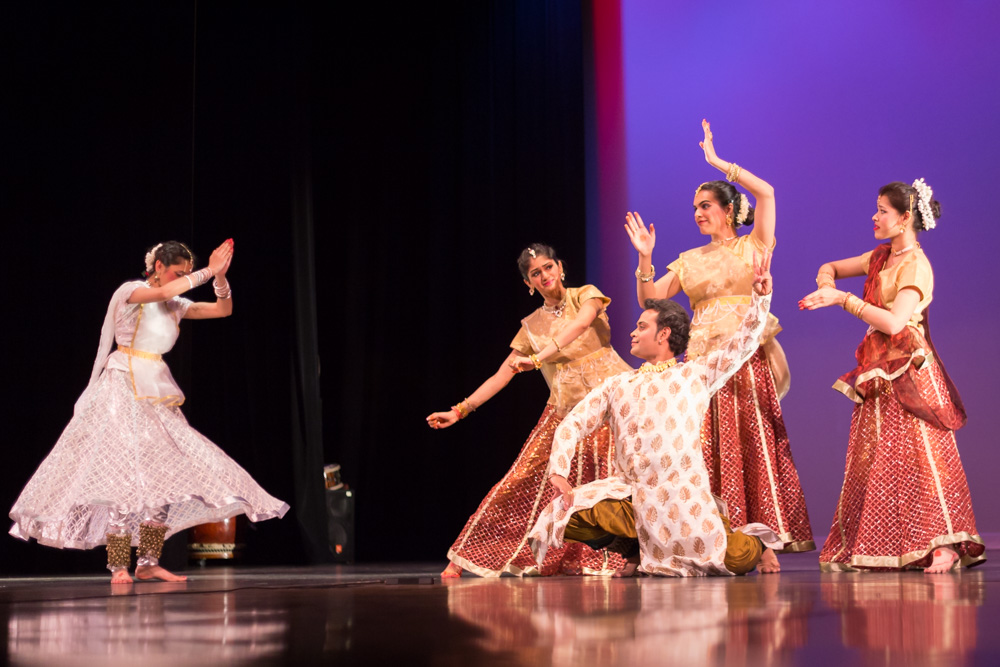 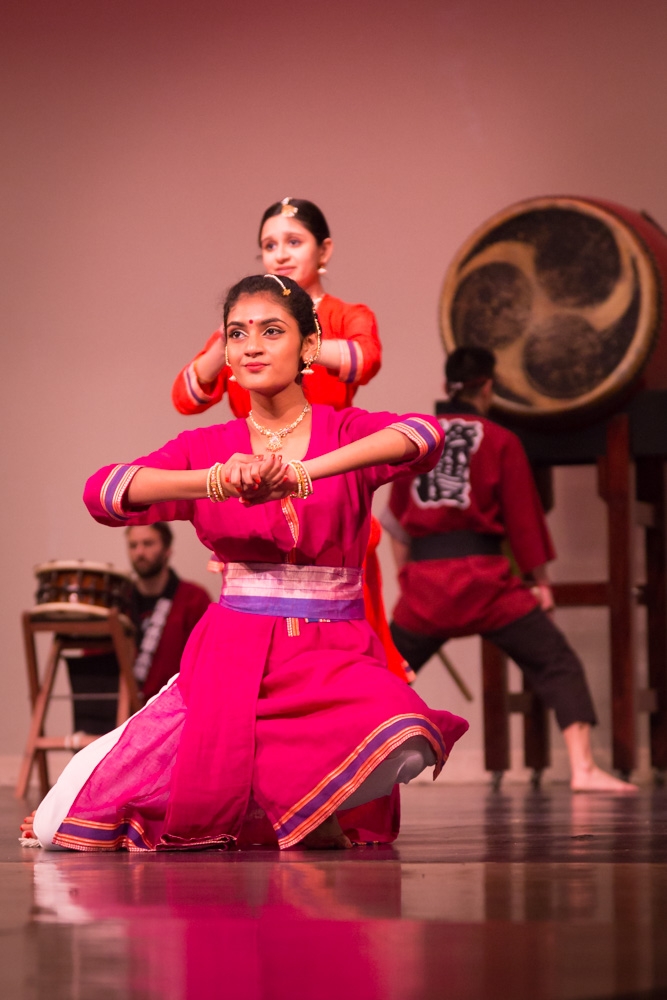 Since moving from India to Flint in 1975, Ashoka Rao has done professional fund development for a local non-profit organization and is currently development director at Big Brothers Big Sisters of Greater Flint. She has also chosen to devote time to doing what she loves and does best – teaching Classical Indian Dancing.

Ashoka’s dance school, Nrityanjali, has been an important part of her life since 1989, when she started teaching in the basement-turned dance studio school at her Swartz Creek home. Nrityanjali means “offering in service of dance,” and that’s exactly what she does for local students of Indian heritage, ranging in ages from four to 40. The purpose of the school is to preserve, promote and propagate the classical dance heritage of India.

With many sponsors and grants from the community, Nrityanjali is also a non-profit organization, so students can receive the best and purest teaching possible – by Ashoka, visiting Gurus of Lucknow Gharana, and also by visitors from Prayag Sangeet Academy in Alahabad, India. The students are trained, observed, provided with workshops, and prepared to take written exams to test their theory on the details of their traditional Kathak style of dancing. 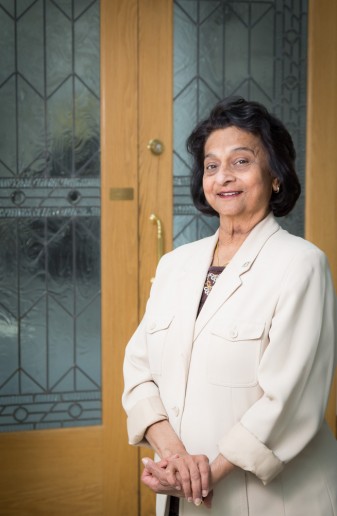 This dancing style began as a devotional performance, considered a temple art – either to perform for the God as a prayer, or to reenact the prayer for an audience. It is their belief that the Lord of Dance, Nataraja, taught these dances to humans thousands of years ago. According to the Hindu belief, the world was at first dark and chaotic. The universe was set in motion and in rhythm by Lord Nataraja, and this became the Dance of Creation.

“When your art form hails from such deep belief of creation and creator, you have to learn to surrender to that power, to that energy,” Ashoka explains. “You are continually bowing to that power and energy.” Staying true to this ancient tradition, most dancers and instructors memorize all the music, syllables, poetries, and Sanskrit hymns. The knowledge about the art of dancing is passed down from the Guru to the Shishya (student), and there is no place for the use of a tape recorder. “You have to absorb it, not copy it” Ashoka says.

“I am able to teach the value of the spirituality of the dances, as well as the theory and details. I have been fortunate to pass on the purity of it.”
ASHOKA RAO

One of the eight forms of Indian classical dance is called Kathak, and originates from ancient northern India. From the Sanskrit word katha meaning “story,” the movements can be both pure and expressive. It has always been considered a temple art, but began to change by becoming more flashy and fancy, to entertain members of the royal courts. 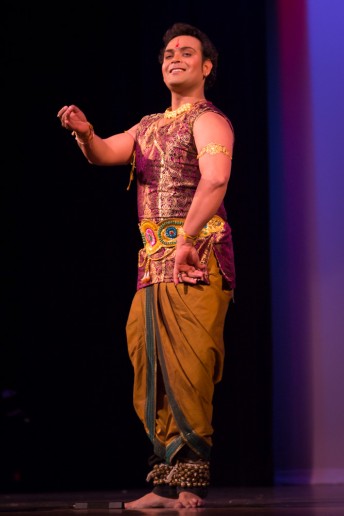 But at the core, they all share the same classical roots. “It is our pursuit to reach oneness with the creator,” says Ashoka. “If your dance is in praise of our God, then it is classical.”

With her teachings, and in preparation for their recitals, Ashoka likes to experiment with the dances. “I took pieces of music and put Indian syllables over it,” she says. “They portrayed both a righteous and dark side, which gave nuances to the performances. I didn’t want to lose the purity of each side of the different art forms.”

One example of her experiment is incorporating Japanese drumming – a group named Hiyru Diako, Flying Dragon – along with her dancers. She told the Japanese drummers, “Don’t compromise anything – your style, the way you do it, the body movements you do, the freedom you need. Just play it in your own style.” Ashoka believes that the nuance of the artistic collaboration works perfectly because emotions are something all humans share. “When dancers portray those emotions, audiences are able to accept and enjoy it,” she says.

Certain emotions and facial expressions are vital to the performance, and are considered part of the choreography. Along with the body movements, there are approximately 54 defined single- and double-hand gestures and foot positions, and defined subject matter. A dancer magnifies facial expressions, acting as the mediator between the God and the audience. Ashoka explains that the goal is to tell the story in such a way that the audience is involved in listening to what the artist has to say. This is a universal concept; but Classical Indian Dancing is unique, because “When you are praying, you try to be at peace with yourself,” explains Ashoka.

Ashoka started dancing at the age of three, and has won a few national dance competitions in India. Throughout her youth, she wanted to explore and learn different styles with a variety of music, instruments and language. After a knee injury left her unable to dance as quickly with the pace of the music, Ashoka now enjoys sharing her experiences with her students. “The children that I teach, and their parents, have always been very dedicated,” she saya. “I am able to teach the value of the spirituality of the art form, as well as the theory and details of the dance. I have been fortunate to pass on the purity of it.”

One aspect of teaching that she loves is when former students come tell her that they now understand the seriousness, the commitment, the discipline, and the calmness that dancing gave them, finding those values helpful – even in the real world. By passing down her culture’s traditions and beliefs through her teachings, Ashoka feels she is maintaining their heritage.

And what she has proudly discovered is that for her students, Classical Indian Dancing is anything but a hobby. It is something more serious: an art form that expresses spirituality – dancing that is like painting with one’s body and soul.