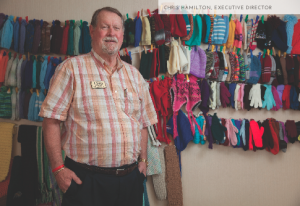 The year was 1924, and despite a rapidly expanding auto industry, there were hundreds of hungry children in Flint. The Old Newsboys of Flint, Inc. was formed that year to help those in desperate need. Two Goodfellows from Detroit’s Old Newsboys visited Flint’s Buick Body Plant to help kick-start the organization. With leaders from the factory, the police and the fire captains, along with help from business and civic leaders, Flint’s Old Newsboys was organized, and volunteers hit the streets for their first newspaper sale. True to their slogan, Let No Child Be Forgotten, the organization raised $987 in their first year, enabling 210 needy kids to find gifts under the Christmas tree.

One youngster and her five siblings were not expecting a merry Christmas that year. Their mother, the family’s sole supporter, was unemployed. But shortly before Christmas, an old car pulled up in front of their house and Old Newsboys delivered sweaters, hats, socks, mittens and toys for the children. And the family never forgot it.

ONB of Flint is now celebrating its 90th anniversary. Executive Director Chris Hamilton says that in that 90-year history, over 787,000 children have been helped through the Christmas Program. Thousands of kids have received coats and shoes through the Warm Heart Healthy Start Program and hundreds more have been helped through the Emergency Box Program which supplies provisions for families that have suffered a catastrophe of some sort, such as a tornado, fire or flood. “We come alongside families that have lost everything and help to get them on their feet,” Chris says.
ONB holds three major annual fundraisers – the Million Dollar Golf Classic, the President’s Valentine’s Gala and the Annual Newspaper Sale, which Chris says generates the most support for the organization. Every year on the second Friday in December, hundreds of volunteers stand on street corners passing out newspapers to collect donations, which are used to fill boxes for the Christmas Program. Each box contains a sweat suit, two pairs of socks and underwear, a hat and a pair of Thinsulate gloves, dental hygiene products and an age-appropriate gift. Chris reports that last Christmas, 7,000 children received a box from ONB. “We concentrate on basic essentials,” he says, “which helps build their self-esteem so they can feel good about themselves.” In the early years of ONB, all of the toys in the Christmas boxes were handmade. It’s reported that in 1954, one volunteer made 163 doll dresses because she never forgot how ONB helped her family when she was a child.

Chris has a long history with ONB. As the son of a doctor, he says he had the best childhood a kid could ever have. He was also an Eagle Scout. “I always had the
desire to give back and be involved in my community,” says Chris. He started fundraising for ONB in 1969 while working at AC Spark Plug and in 1984, took over all of the plant’s fundraising activities. He has been the executive director since 2008 and was also appointed to a seat on the 17-member Board of Directors.

There are three full-time and one part-time ONB staff, as well as eight seasonal employees and hundreds of volunteers who help pack boxes. Many businesses and organizations have supported ONB throughout the years; Chris remembers when C.S. Mott would pay the utility bills out of his own pocket to keep ONB going. “We’ve been so fortunate to have established relationships with people who want to help us!” he exclaimed.

An example is Curtis Thompson, owner of Complete Runner. He asked the manufacturer of New Balance footwear if they could do anything to help needy kids. ONB is now able to provide kids with a pair of top-quality athletic shoes through the Warm Heart Healthy Start program.

Old Newsboys has touched the lives of many people, including Heather McMullen, the organization’s finance director. Hanging on her office wall is a framed picture of her and her father; along with her father’s apron, which he wore while standing on the street corner collecting donations during the newspaper sale. Randy Weidner, who recently passed away, was a staunch ONB supporter and always encouraged his daughter to support the organization that had helped them out as a young family. “My dad instilled that in me,” Heather remembers.

On July 20, Old Newsboys of Flint will host a 90th Anniversary Celebration at the Holiday Inn Gateway Centre and invites the community to attend. “Come celebrate with us!” exclaims Chris. “We will continue to work tirelessly to achieve our goal of letting no child be forgotten.”